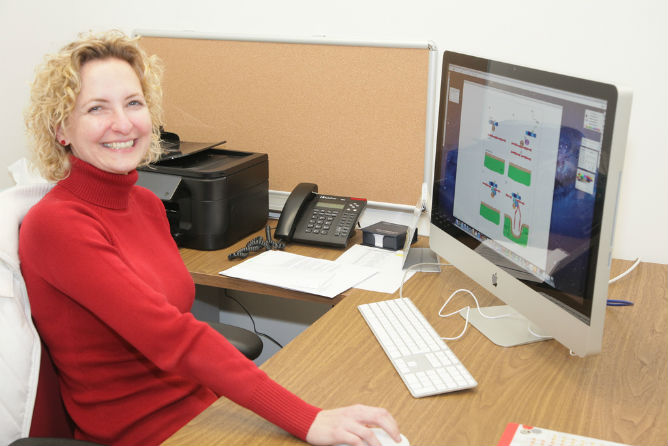 Dr. Hava Gil-Henn is one of a dozen who accepted the offer to come on board when the school opened in October 2011 in Safed.

As a post-doctoral fellow at Yale University’s School of Medicine, in 2006 she was honored by the American Society of Bone and Mineral Research for studying how genetic mutations affecting bone cell movement may contribute to diseases such as osteoporosis. She went on to become pioneering associate research scientist at Yale.

Gil-Henn is not only an expert in cell movement but also in body movement. She danced at the renowned Israeli modern dance company, Bat Dor, for years before trading her tutu for a lab coat.

“I started dance lessons at age five,” the Givatayim native tells ISRAEL21c. “I wanted to be a professional dancer.”

She was talented enough to earn Outstanding Athlete status during her two-year army service, which allowed her to work at the Ministry of Defense near the Bat Dor studios, where she rehearsed daily.

Afterward, “I decided I wanted to see the world, so I went to Europe to look for a place at a dance company there, but I missed home too much and I had a boyfriend waiting for me in Israel, so I came back.”

That’s when she made the switch to academics. “I stopped dancing because I had a lot of injuries, and I was tired of getting up with pain every morning,” she explains. “I also wanted to use my brain a little bit more.”

From barre to biology

During high school, her biology teacher had sparked her interest in life sciences. “When I registered for [Tel Aviv] University I chose to study biology,” she says. “Usually you specify three options in order of priority, but I just chose one.”

Why biology? “I like exploring the unknown. With biology you are basically learning all your life because there are always new things, and you see processes happening in real time.”

In her third year, she began lab studies on breast cancer, a disease from which her grandmother recovered 25 years ago. Today she continues researching how microscopic structures of the cytoskeleton — the protein “scaffolding” within body cells — may enable cancer to spread.

It was also during her third undergraduate year that a common friend introduced her to her future husband, Arnon. They married 12 years ago, earned PhDs from the Weizmann Institute of Science — and went off to Connecticut with their year-old son to do post-doc research at Yale’s School of Medicine.

“Altogether, I was at Yale eight years,” says Gil-Henn. Following her award-winning bone cell research, she was working at Yale in collaboration with the Albert Einstein College of Medicine in New York to investigate invadopodia — invasive “feet” protruding from metastatic cancer cells. In March, she’ll go back briefly to complete her work.

No longer a foreigner

“My husband always wanted to go back to Israel. I was open to doing science wherever they’d give me a job. But at some stage, we decided as a family to go back. I wanted my family to grow up here.”

Her husband accepted an offer to head a laboratory at Haifa’s Technion-Israel Institute of Technology. She mulled several possibilities before opting to get in on the ground floor of Israel’s first new medical school in 40 years.

“There was something nice about the idea of being part of the group establishing a new place,” she says.

She is in charge of coordinating instruction in genetic reproduction, growth and development (“Your whole life, from the time you’re a chromosome till the time you are a grown-up”), setting up a lab to research cell migration and invasion, and teaching signal transduction.

Gil-Henn hopes that the new institution will be a unifying force among the Galilee’s Jews, Muslims, Druze and Christians. Clinical instruction is held in hospitals and ambulatory centers across the region, and Bar-Ilan is establishing a research institute and medical research centers as well.

“At the medical school, I’ll be able to relate our findings to what’s happening in humans. Our curriculum will put students in touch with doctors in the field — as well as with patients — from day one, by arranging teaching tours at area clinics. At the end of the day, our goal is to make the discoveries that will lead to new drugs and better patient care.”

Gil-Henn has lately taken up the cello, a relaxing interlude from her job. The family lives in Carmiel, centrally located between Haifa and Safed. “It took me some time to adjust to living here after New York,” she confides, “but our son adjusted very smoothly. He’s really glad to be back.”

UNCOVER ISRAEL - Get the ISRAEL21c
Weekly Edition free by email
Sign Up Now!
Bring Israel's story to life.
Millions of people around the world rely on us to gain a deeper understanding of Israel. We are the trusted source for original content you won't find anywhere else.
You can make a difference. Donate today to support journalism that brings Israel’s story alive.
SUPPORT ISRAEL21c
Read more on:   People, Bar-Ilan University medical school, Safed, Hava Gil-Henn