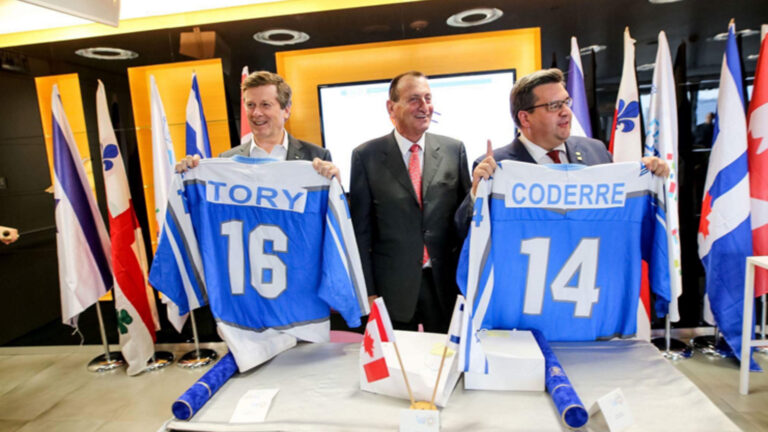 Mayor of Montréal Denis Coderre and Mayor of Toronto John Tory are currently in Israel on a joint economic mission.

The mayors, accompanied by 120 Montréal and Toronto entrepreneurs, business people and representatives of institutional and community organizations, are hoping to learn what makes Israel such a thriving startup source.

.@MayorOfTelAviv welcomes @JohnTory @DenisCoderre to #telaviv for their first joint visit outside #Canada & they chose to come to #Israel! pic.twitter.com/j4WwF3rnT5

“Israel has emerged as a leading global hub for technology due in part to its successful incubator ecosystem,” said Tory. “Our mission is to learn how government interventions have facilitated the rapid growth of their technology sector, learn from their innovations and connect Toronto businesses with opportunities in their market.”

The Canadian delegations have Tel Aviv, Jerusalem, Beersheva, Ramallah and Bethlehem on their itinerary.

The Toronto and Montreal delegates will also take part in the 4th International HLS & Cyber 2016 Conference on physical and cyber security, and the 31st International Conference of Mayors, organized by the Israel Ministry of Foreign Affairs.

“Given the high-profile of the delegation, I am convinced that this mission will help promote our expertise and added-value innovative products as well as create new collaborations that will be mutually beneficial, especially in the fields of cyber security, clean technologies, startups, the digital sector and creative industries,” said Coderre.

Since the Canada-Israel Free Trade Agreement came into force in 1997, the value of trade in goods between the two countries has tripled, reaching $1.5 billion in 2014. In 2015, the leading merchandise exports from Canada to Israel were valued at $342 million.

At @Google’s Tel Aviv Innovation Centre Campus & learning how we can replicate this creative zone in Toronto. #TOWRCorridor pic.twitter.com/J1Jnoe6GHH

“Trade missions provide an important opportunity to demonstrate we are open for business and know how to work with international markets and partners,” said Jan De Silva, President and CEO, Toronto Region Board of Trade.

“This mission will showcase the vibrancy of two of Canada’s largest centers of commerce and innovation − Toronto and Montreal. It will expose our business communities and civic leaders to one of the most dynamic start-up environments in the world. Our Toronto delegation includes influential representatives from leading financial services firms, eager to contrast Israel’s Fintech and cybersecurity ecosystem to ours and identify transferable best practices for our global financial center.”