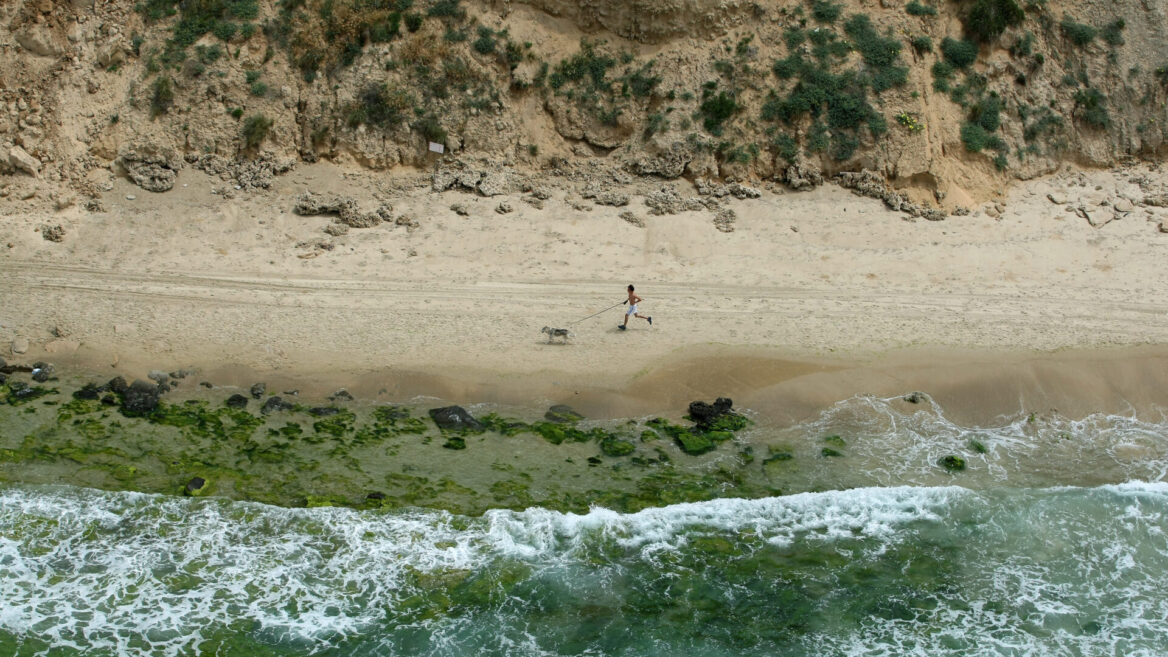 Take a walk on the beach at Hof Hasharon. Photo by Moshe Shai/Flash90

Fancy a visit to the beach – in the midst of winter?

When the water is cold and the humidity has gone the way of the summer jellyfish, there’s still lots to do on Israel’s waterfronts without getting your feet sandy.

Along the coast are some lovely hikes, including several in national parks. And a stroll along a beach boardwalk is a great way to catch a stellar sunset– guaranteed to help you remain hopeful, even in corona times, that there’s still fun to be had outdoors.

Here is ISRAEL21c’s list of the top 10 boardwalks and beach walks in Israel. 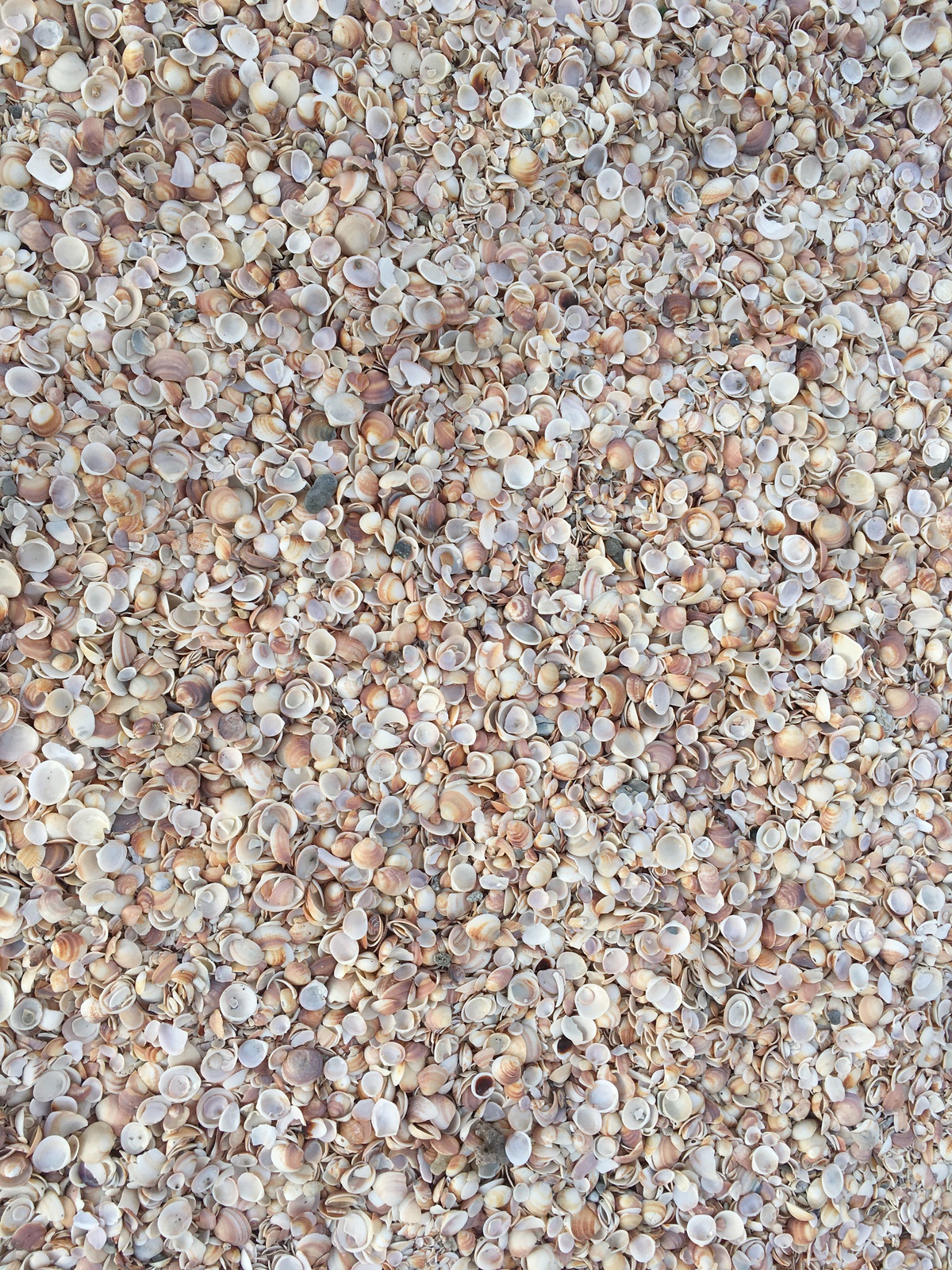 Regularly touted as the most romantic tiyul (hike) in Israel, you can start this loop walk from either the Hof Habonim or Dor beaches – it’s essentially one long strip. The trail mostly stays on the cliffs overlooking the beach but sometimes dips into delightful coves, including one jam-packed with seashells. There’s a genuine shipwreck and a lagoon called the Blue Cave.

It’s a loop because for much of the trail there’s a parallel jeep path that makes for a speedier return (especially if the sun is already down). Located along the Mediterranean near Zichron Ya’akov, Hof Habonim is a national park and requires advance reservations due to Covid-19. 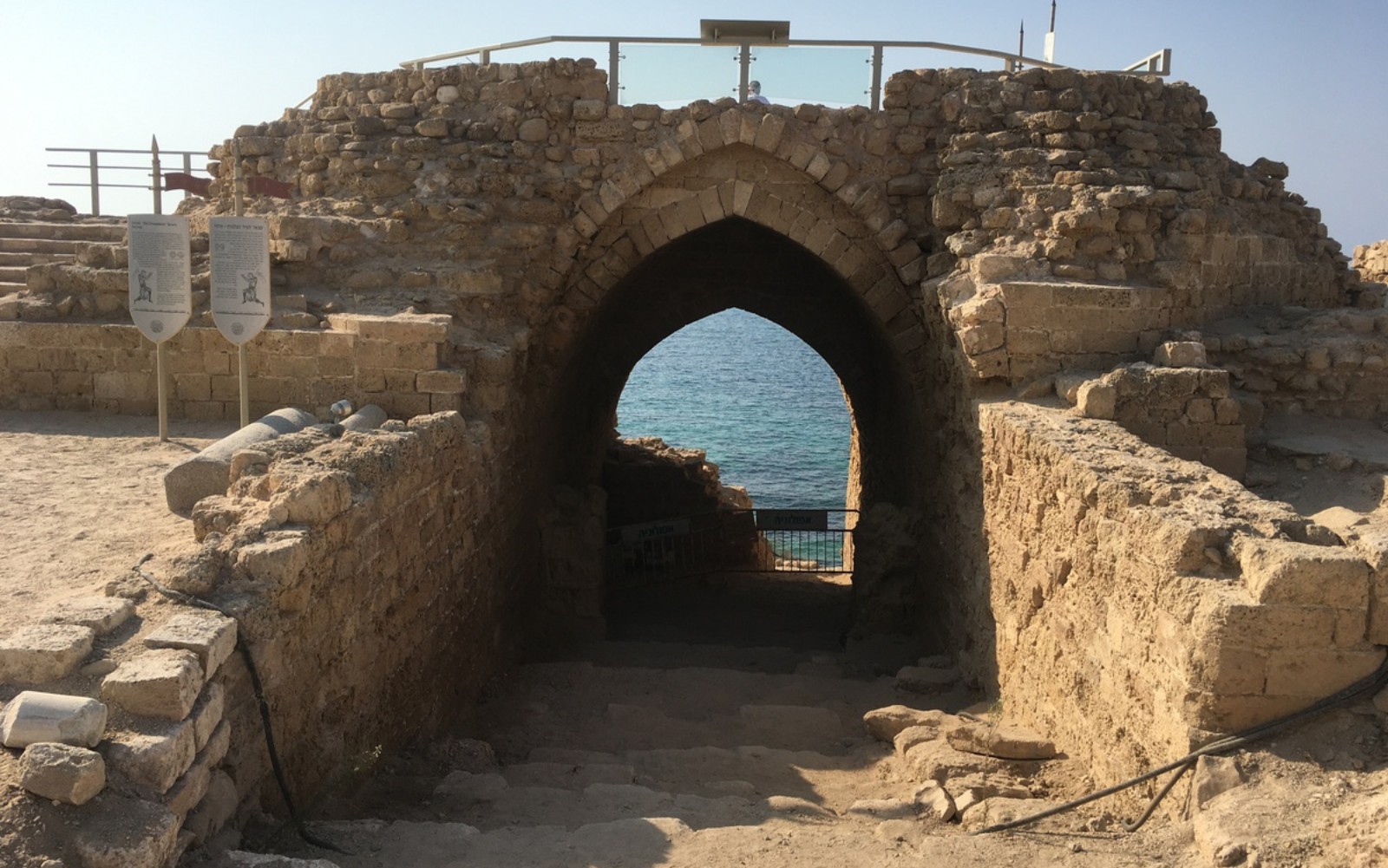 The ruins of hundreds of years of settlement – Roman, Byzantine, Muslim, Ottoman – are perched on a cliff overlooking the Mediterranean Sea just north of Herzliya. After you pay your entrance fee, you can spend an hour and a half walking along a well-marked path exploring the ancient citadel, moat, storehouses and bridges. 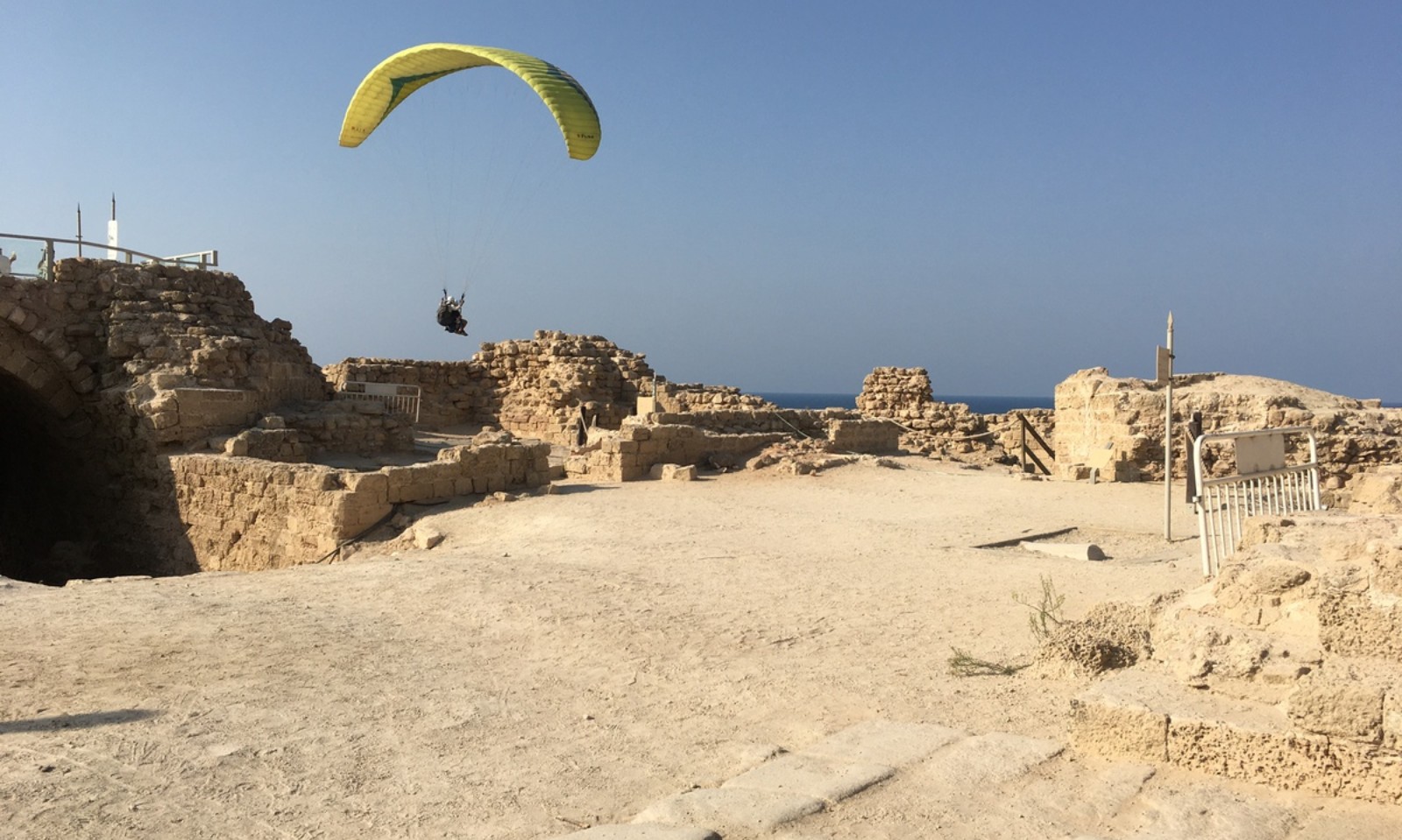 Appolonia is not as extensive as Beit She’an or Caesarea, but it’s also a lot closer to Tel Aviv. The park closes at 4pm in the winter. Access to the beach is via a separate but nearby entrance. Slightly north of Appolonia, this is a national park with no entrance fee. The Hof HaSharon Beach Reserve runs between Kibbutz Shefayim to Kibbutz Ga’ash. To get there, type “Shefayim Nude Beach” into Waze but don’t worry – when you see the sign for the Israel Trail, turn right instead of continuing to the beach.

Inside the park, follow the signs for the Cliff Trail, which has phenomenal views from 40 meters above the sea. There are well-appointed wooden sitting areas and signage explaining various flora and fauna. Return on the Iris Trail, which is filled with flowers, especially in the spring. If you have time, at the midpoint, you can cut down to dip your toes in the secluded Ga’ash beach (unless you prefer the nude one to the south). 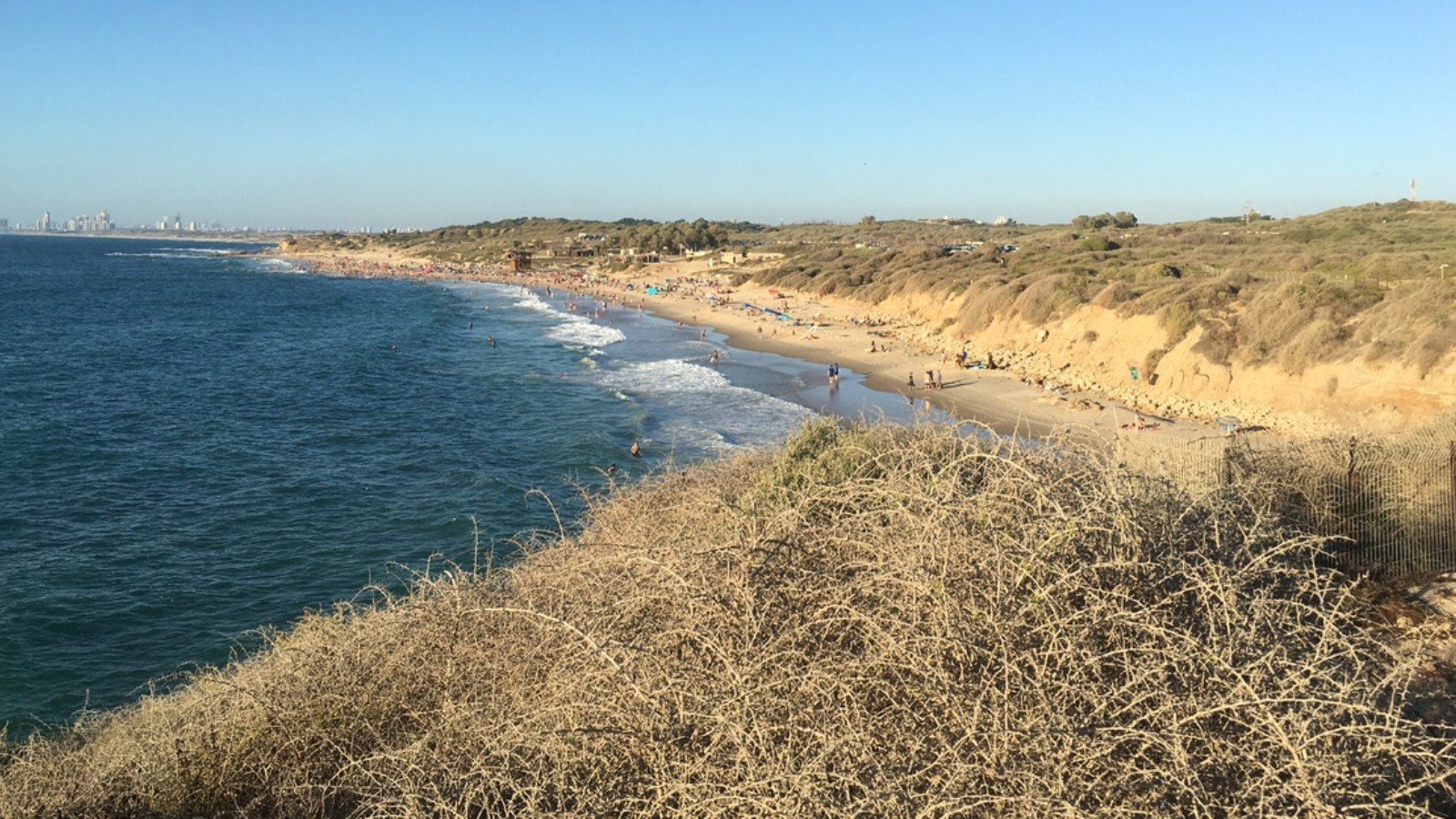 This brief two-kilometer hike is entirely within the grounds of the beach (and its paid parking lot); as a result, most visitors head straight to the sands and miss it. Don’t make that mistake! Instead, park at the southern end of the lot and follow the trail markers into the tall grass.

It won’t be long until you reach the ruins of the long-gone Canaanite port city of Yavne-Yam, with a stunning view over the Mediterranean and the entire Palmachim Beach. Other remains date back to the First Temple period, as well as the Persian, Hellenistic, Roman and Crusader periods. The beach also forms part of the habitat for the sea turtle. 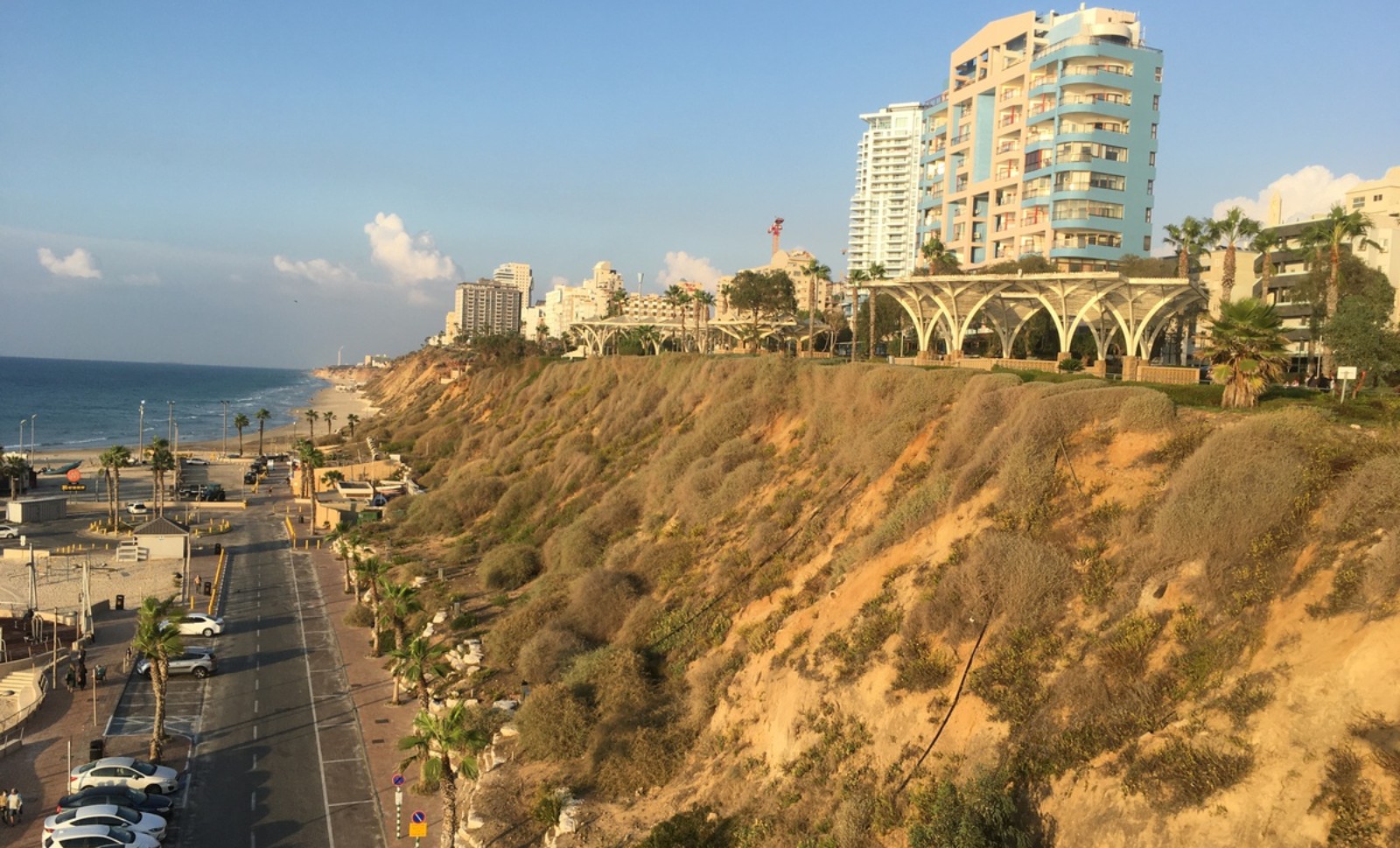 View of the promenades of Netanya. Photo by Brian Blum

We’ve dubbed Netanya “promenade city” for the sheer number of boardwalks built and refurbished in recent years. You can easily walk for an hour from north to south (or vice versa) through eight connected sections, each with its own unique design and landscaping.

The Shaked Promenade boasts a 1,000-seat acoustic shell amphitheater. Matzok Promenade is perfect for watching the nearby paragliders, while the Claude Lanzmann southern promenade (named after the famed film director) sports environmental sculptures made from recycled materials by artist Ruslan Sergeev. At the center is Netanya’s well-known “beach elevator” enabling travelers to descend to the beach in 20 seconds for a mere 5 shekels. 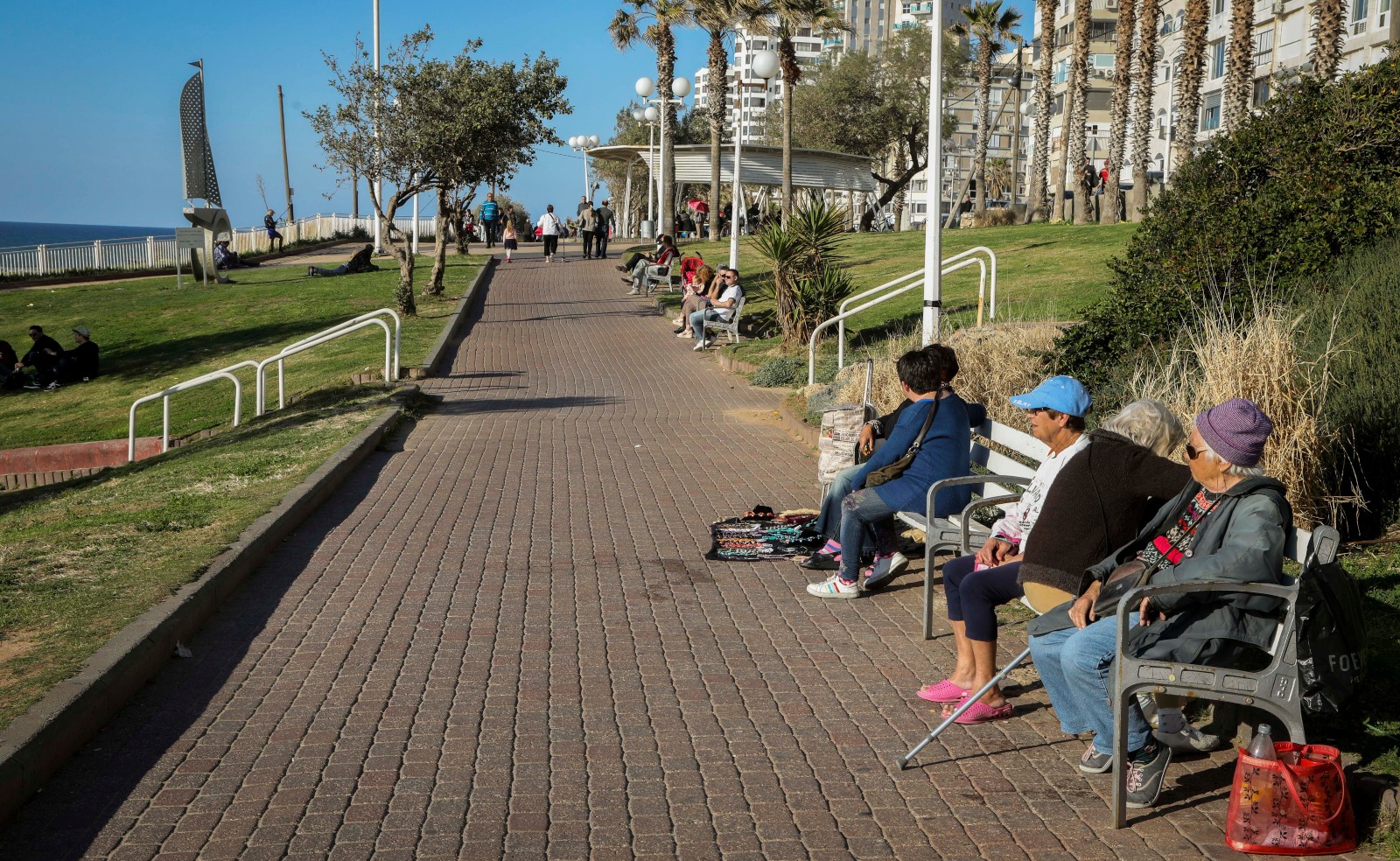 You could always walk along the beach from Rishon to Bat Yam, but this section of the boardwalk was recently completed and makes a sand-free stroll a contiguous pleasure.

Like the promenades of Netanya, this is an urban tiyul – you won’t see any wild sand dunes or peer over precarious cliffs; instead there are plenty of restaurants and pubs (and thankfully quite a few public restrooms) in this popular stretch that always stays close to the water without ever getting wet. There’s plentiful (paid) parking on the Rishon LeZion end. 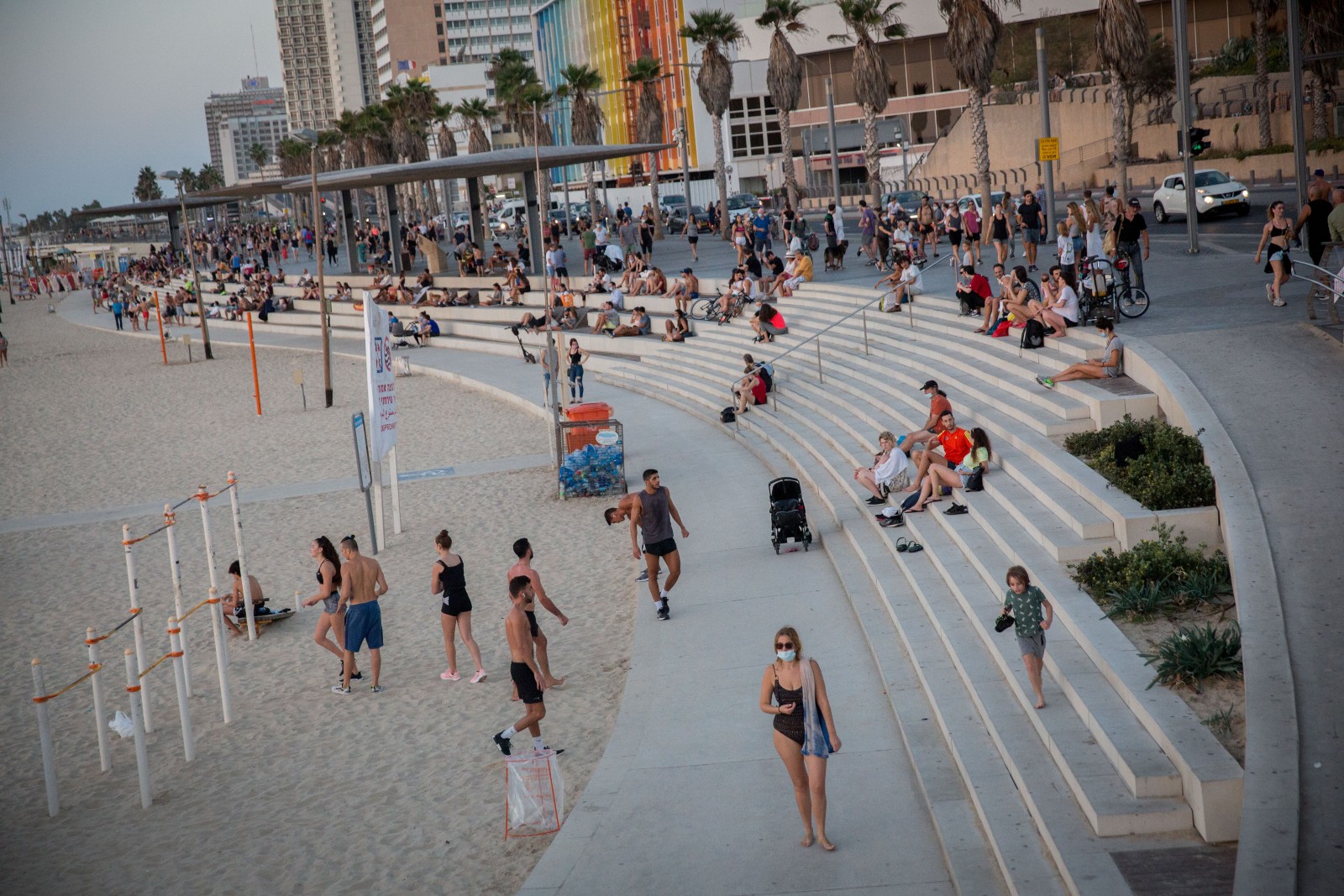 No list of boardwalk strolls in Israel would be complete without mention of Tel Aviv’s famous tayelet, which in 2019 underwent an extensive facelift and is teeming with all manner of humanity, day and night: joggers, bikers, scooters, Segways, dancers.

There is no shortage of top-notch eateries nearby, whether for sit-down (someday) or Covid-19 style take-away. Rent a bike and you can easily cover the entire tayelet, from the Tel Aviv Port on the northern end, to Old Jaffa to the south. Dogs are welcome at several beaches, including the eponymous “Dog Beach,” as well as at Alma Beach (aka Charles Clore Park).

Haifa’s most popular beach (and its boardwalk answer to Tel Aviv’s tayelet) boasts a lengthy promenade with restaurants, cafés, a dancing arena and an amphitheater. It’s accessible to people with disabilities, offering an access road to the water and wheelchair-friendly changing rooms adjacent to the north lifeguard station.

The beach is named after David (Dado) Elazar, IDF chief of staff during the Yom Kippur War. Start your walk at the Hof HaCarmel train station and continue north. Feeling ambitious? Extend your stroll with a visit to Shikmona Park, which has yielded extensive archaeological finds from the Bronze Age and a mosaic tiled floor from the Byzantine period. 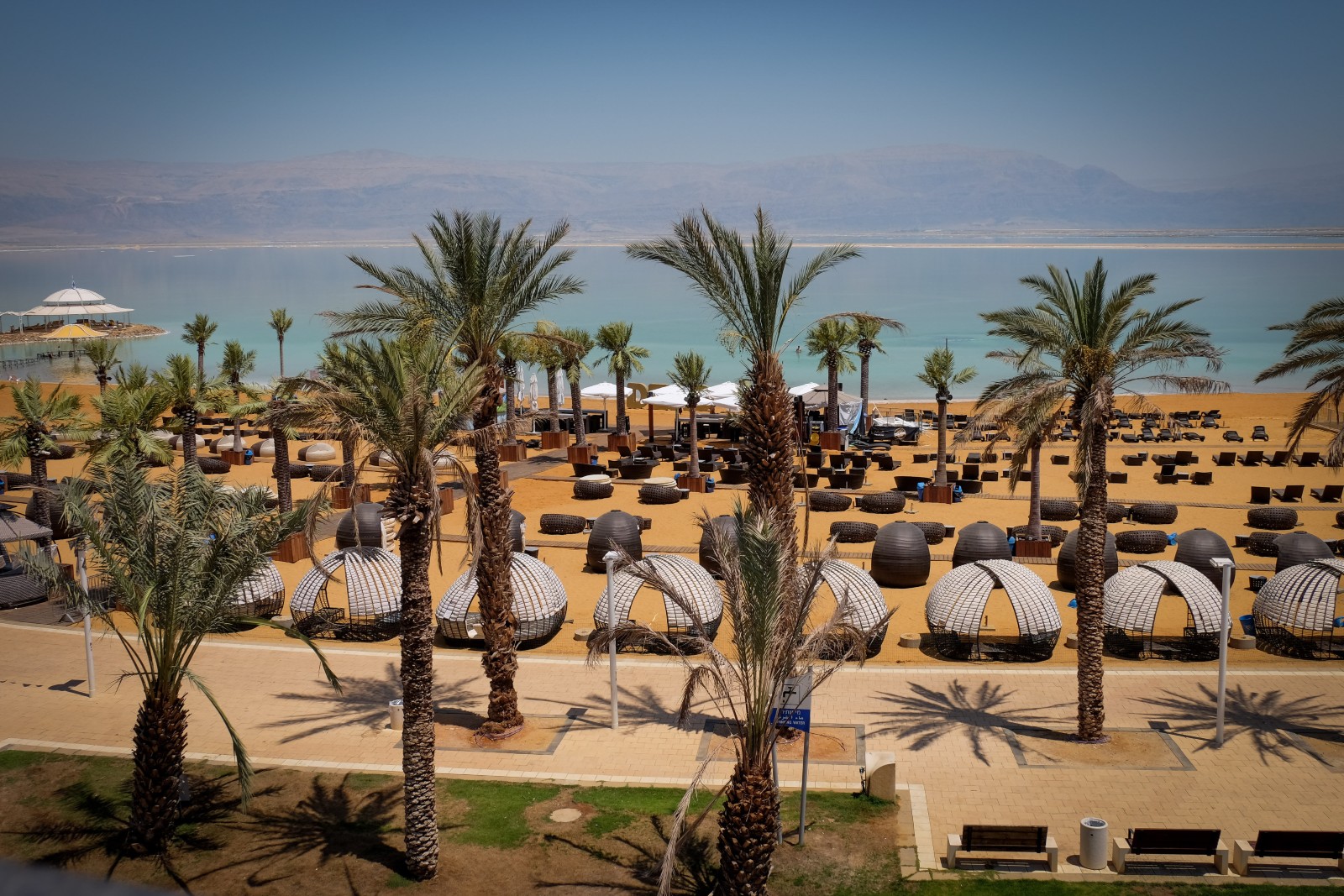 The Ein Bokek beach promenade at the Dead Sea. Photo by Gershon Elinson/Flash90

The Mediterranean doesn’t get to have all the fun. The Ein Bokek area of the Dead Sea – where all the hotels are – has a four-kilometer promenade granting access to the sea’s beaches, playgrounds, showers and lounge chairs. The promenade is family friendly, and you can push a stroller right up to the water’s edge.

The Dead Sea Promenade, as it’s formally known, was created in response to the problem of rising sea levels in the southern portion of the Dead Sea caused by industrial mining activity. The design connects the main axis of the hotels with the renovated beach, which now has a series of large white “islands” providing continuous shade. Combine a trip with an overnight and you can jaunt up the Snake Path the next day at nearby Masada. 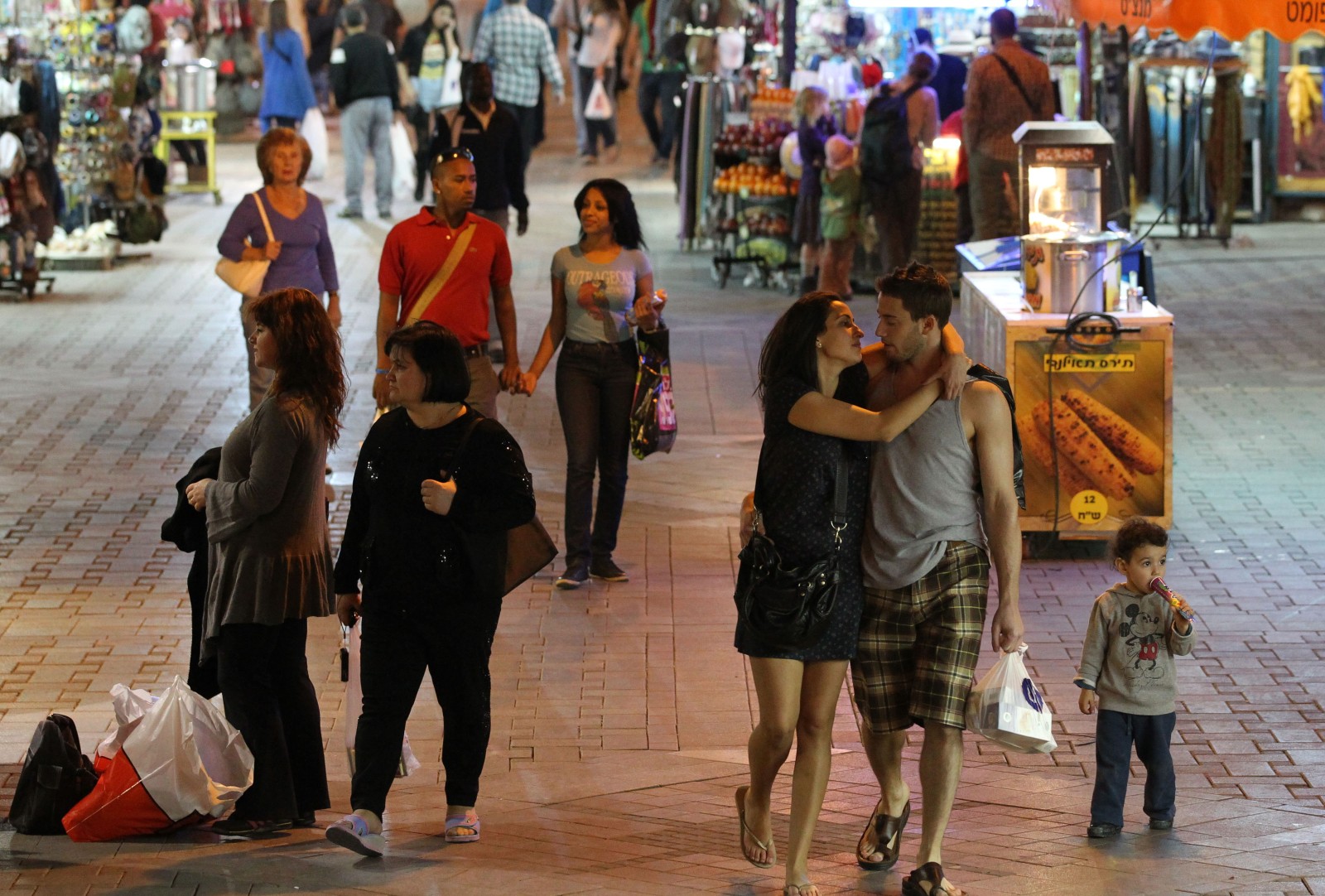 If you’re in Israel’s southernmost resort town, chances are you’ll wind up strolling the city’s iconic promenade, running from the glamorous hotel district on the portion closer to Jordan, to the bazaars and street stands near the center of town.

This is less of a tiyulthan an excuse to go shopping or grab a bite. There’s a bridge in the center that serves as a handy landmark in case any of your party gets lost. If you’re not interested in joining the throngs of parading people (even during Covid times), stake out a chair at the Sinai-style “Mosh Beach,” right near the border with Egypt. The beach is named after its owner, Israeli pop star Mosh Ben-Ari. 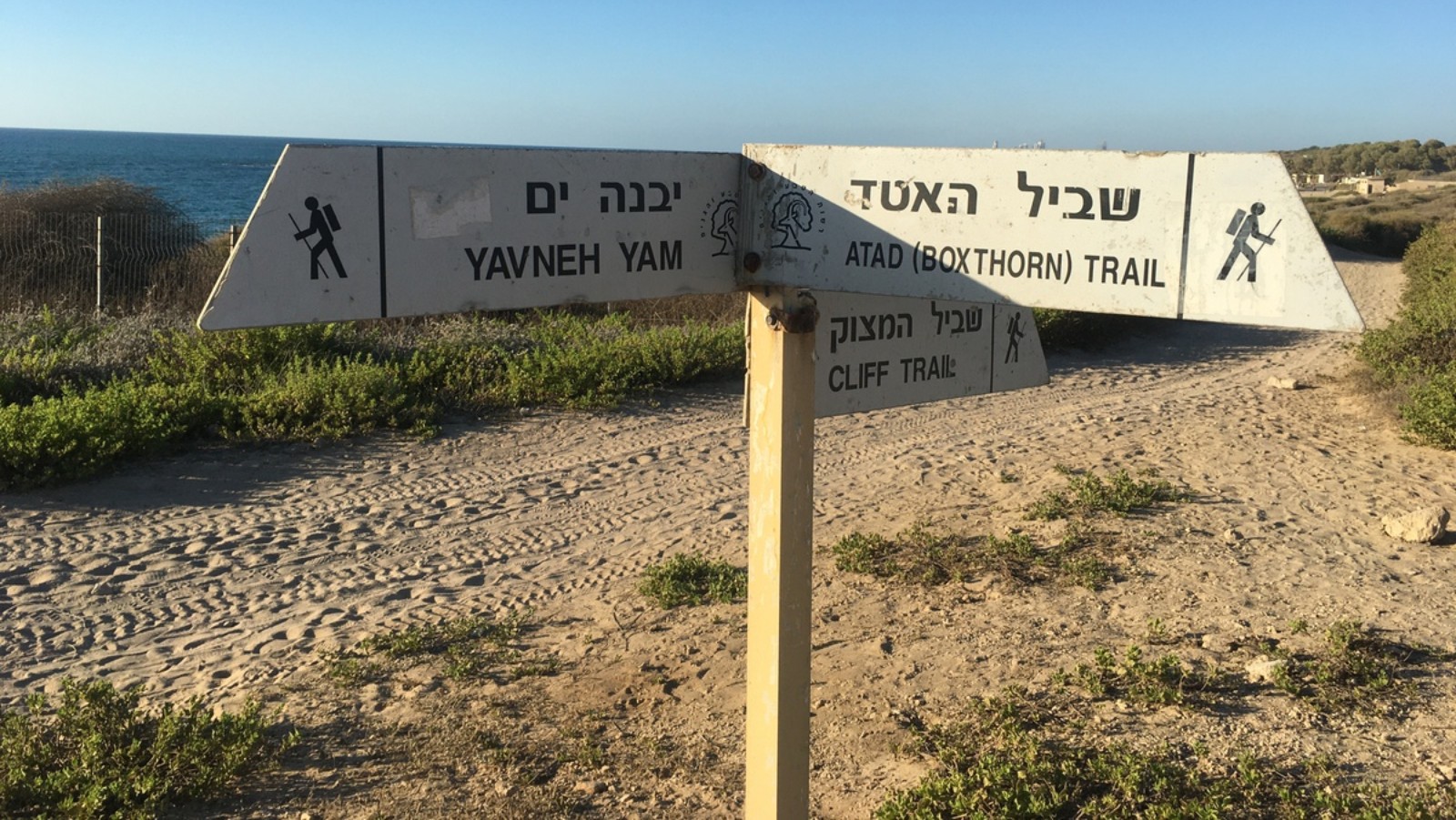 Palmachim Beach is one of the best places in Israel to take a hike any time of year. Photo by Brian Blum
UNCOVER ISRAEL - Get the ISRAEL21c
Weekly Edition free by email
Sign Up Now!
Give
Every
Month
Help ISRAEL21c uncover
the Israel we love