Summer in Jerusalem can be a complex adventure. The city is once again overflowing with summer festivals: outdoor concerts, indoor theater, arts fairs, street parties, wine festivals and beer tastings.

Since dozens of artists, writers, creators, producers and directors call Jerusalem home, it makes sense that the annual Season of Culture takes place here. The $3 million festival is divided up into eight main events from June through August.

“Our curatorial directive is to explore what happens when excellent cultural content encounters Jerusalem, the most fascinating city in the world. This meeting point is highly charged, singular, and can lead to countless artistic discoveries,” says Itay Mautner, the festival’s artistic director.

“There’s a creative energy in this city. The unlikely confluence of different people — some of them crazy — the spiritual search that permeates the air, and even the political conflict – all these elements conspire together to generate a vibe, and everyone can feel it,” Devorah Blachor, who writes her novels under the pen name Jasmine Schwartz, tells ISRAEL21c.

“When people say they love Jerusalem, they attribute their attachment to all kinds of things, but in the end, it’s a vibe that you feel. Artists respond to that kind of energy and are inspired by it – that’s why there are so many of us here.”

Last year, the Balabasta festival in the Machane Yehuda marketplace was one of the Season of Culture’s main draws. 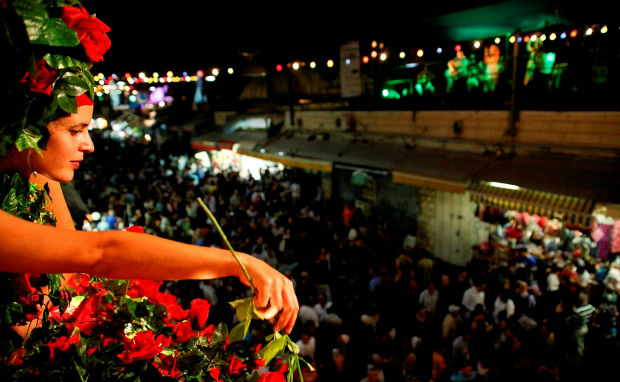 Balabasta lights up the Jerusalem market every Monday in August. Photo by Snir Kazir

Every Monday in August the produce stands became a stage for music, art and performance.

Jugglers, musicians and performance artists mixed in with the fruit and vegetable peddlers; sculptors gave produce crates another characteristic and painters changed their oil palettes for an array of different spices on sale at the market. This year organizers are still waiting to hear if the popular festival will go ahead as planned.

“Contact Point” is another yearly favorite. Leading Israeli artists — Rona Kenan, Alex Epstein, Eran Sabag and Benny Bashan, among others — will create live interventions, or “contact points,” with works of art on exhibit at the Israel Museum on July 12. The Silent Wi-Party, right under Anish Kapoor’s sculpture, Turning the World Upside Down, Jerusalem, will also return.

More than 90 percent of the festival’s productions are created just for the event. But everything is put through a “Jerusalem filter” before being included in the lineup.

For example, Israeli architect and designer Ron Arad’s “Curtain Call” was originally designed for the Roundhouse cultural venue in London. It’s a huge, interactive movie screen made of 5,600 silicon rods, suspended from an eight-meter diameter ring. Visitors are meant to walk around the installation – which will be set up in the Israel Museum garden from mid-August to September 4 — as well as inside the circle to view the projections from every vantage point.

“When you see Ron Arad in Jerusalem it’s different concept-wise, sight-wise and performance-wise than what you see in London,” says Mautner. “We put the readymade shows through a Jerusalem filter and give them a Jerusalem flavor.”

Other events in the Season of Culture include the Jerusalem Festival of Sacred Music (September 6-7) — a 24-hour marathon featuring musicians and artists from Israel and the international arena saddled with giving the idea of “sanctity” a fresh meaning of their own; and “Going up: Jerusalem: Reality & Art Alongside Route No.1,” a “collective pilgrimage to Jerusalem in pursuit of an alternative reality,” according to the artists organizing this event (June 21-27).

“The festival celebrates Jerusalem’s arts and artists in a way that reflects the city’s complexity and diversity,” says Mautner. “It’s for every cultural lover wherever they may be — whether from Tel Aviv or Jerusalem or New York or Delhi. Whoever is a cultural lover is invited.”