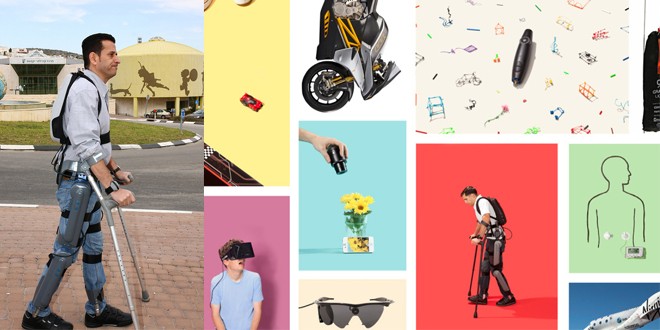 Israeli developed exoskeleton for paraplegics was one of TIME magazine's '25 Best Inventions of the Year 2013.'

Israeli-developed exoskeleton for paraplegics is one of TIME magazine’s 25 Best Inventions of the Year 2013. The medical device developed by ARGO Medical Technologies is hailed for the autonomy it gives back to those who need it most.
“Call it an exoskeleton or a bionic suit, but for paraplegics, it’s freedom.

This innovative device, developed by a quadriplegic Israeli scientist, relies on sensors that anticipate shifts in the user’s balance and translates them into movements like walking and standing,” writes the magazine about ReWalk.

At the 2012 London Marathon, a 32-year-old paraplegic chiropractor ran the race wearing the ReWalk suit.

ISRAEL21c was the first media outlet to write about the quasi-robotic exoskeleton which includes leg braces with motorized joints and motion sensors, a brace support suit and a backpack with a computer and battery.
The story exploded across world media and even landed the futuristic suit a prime time slot on an episode of Glee.

“What makes an invention great? Sometimes it solves a problem you didn’t think could be solved. Skyscrapers can’t turn invisible. Pens can’t write in midair. Paraplegics can’t walk. Except now they can,” TIME writes in its introduction to this year’s list.

ReWalk is available in Europe and has received FDA approval.

Other inventions to make the coveted list include the cronut, a new fusion food of donut and croissant; Motorola’s Edible Password Pill, which does exactly what its name implies; 3Doodler, a pen that doodles in three dimensions instead of two; an artificial pancreas, that detects dropping sugar levels and shuts off regular insulin delivery for Type 1 diabetics; and Volvo’s Solar Pavilion, flexible solar panel that charges the car and folds up to fit in the trunk, among others.

UNCOVER ISRAEL - Get the ISRAEL21c
Weekly Edition free by email
Sign Up Now!
Bring Israel's story to life.
Millions of people around the world rely on us to gain a deeper understanding of Israel. We are the trusted source for original content you won't find anywhere else.
You can make a difference. Donate today to support journalism that brings Israel’s story alive.
SUPPORT ISRAEL21c
Read more on:   News, Rewalk, Argo Medical Technologies, Time, Time Magazine, parapalegic