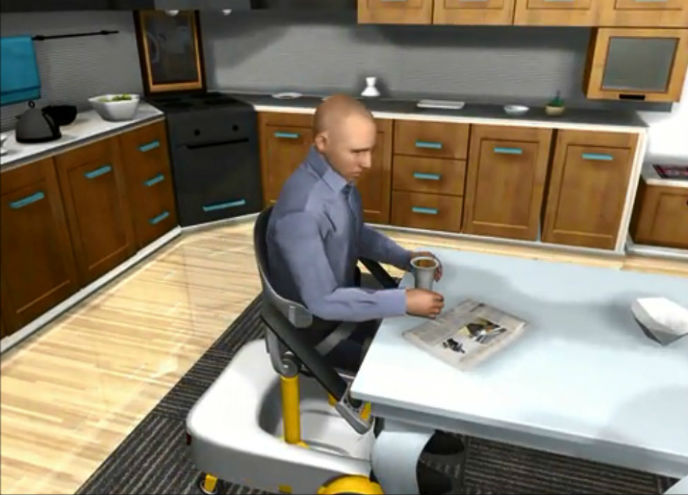 Rendering of the UPnRIDE in sitting position.

The robotic ReWalk exoskeleton from Israel’s Argo Medical Technologies, featured on primetime’s Glee, Time magazine’s list of greatest inventions of 2013 and at the London Marathon, will be a hard act to follow.

But the ReWalk’s inventor, Amit Goffer, is hoping to score another hit with a new innovative wheelchair, UPnRIDE, designed for people like himself who cannot benefit from the ReWalk because they are quadriplegic and don’t have full functionality in their arms. (The ReWalk is only by those who are paraplegic, paralyzed below the waist.). 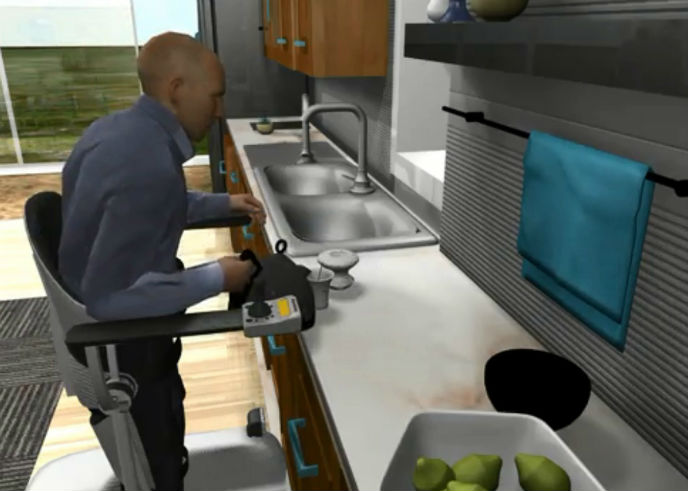 Rendering of the UPnRIDE in standing position.

UPnRIDE will enable many wheelchair users to be fully mobile in standing position anywhere, including in an urban environment, says Oren Tamari, CEO of RehaMed Technologies.

“After seven years at Argo, and after bringing the ReWalk to where it is now, I am currently working with Amit Goffer on a new product that will improve the quality of life and health of all wheelchair users,” Tamari tells ISRAEL21c.

“This is very meaningful, because we know that not every wheelchair user can use the ReWalk. This new solution can fit almost everyone who uses a wheelchair.”

As a category, the standing wheelchair is not a new product. These devices have been shown to improve circulation, elimination and bone density, and could also improve overall quality of life and independence among wheelchair users.

What’s different about the UPnRIDE?

“The twist we bring here is the stabilization,” says Tamari.

“Other solutions on the market may only be used indoors because they move the center of gravity out of the chair and there would be a fall on a slope. The UPnRIDE will stabilize the user no matter what surface he rides on. He’ll stay vertical to the ground even if it’s uneven or sloping. This is the essence of this product, because we can maintain the center of gravity and allow full mobility in standing position.”

Rendering of the UPnRIDE in sitting position.

The UPnRIDE also was designed with ejectable arms as an emergency safety feature for extreme terrain, “like airbags in a car,” says Tamari. Under most conditions, the auto-balance mechanism would be sufficient.

The device will easily transform from sitting to standing positions so that wheelchair users could partake of normal everyday activities in a more seamless way than is currently possible.

“The standing mechanism of our product also is different. We do it with something similar to braces and straps, while in other solutions it is done with a fixture in front of the user that does not allow sitting next to a table.”

Perhaps just as importantly, Tamari adds, “We’ll use industrial design it in a way that it will look more like a Segway, so when people see the user of this device they won’t think ‘disabled.’ This is an issue of self-esteem.”

A team of engineers from a range of disciplines has been developing the device in Ramat Yishai, in the north of Israel. Tamari, a physicist with a master’s of business administration, heads the company while founder Goffer (who remains actively involved in Argo Medical Technologies) is the president and chief technology officer.

Having filed patent applications, UPnRIDE is in the design phase now, and RehaMed is currently in the midst of a $1 million fundraising round.

“We are hoping to have the first prototype within several months,” says Tamari.

“We have a plan of about two years to introduce the first model, and then we will do some improvements and add-ons. Advanced models will allow reclining and joint training, as well.”

The market could be lucrative, given that the number of global wheelchair and mobility scooter users in developed countries is 8.2 million and growing annually by five percent, according to RehaMed research.

About 61% of those people can use smart wheelchairs, translating to a potential annual market of several billion dollars based on the UPnRIDE’s target end-user price of $25,000.

“The trend in the industry is toward robotic wheelchairs and ‘smart’ wheelchairs, and we plan to be a leader in this industry,” says Tamari.