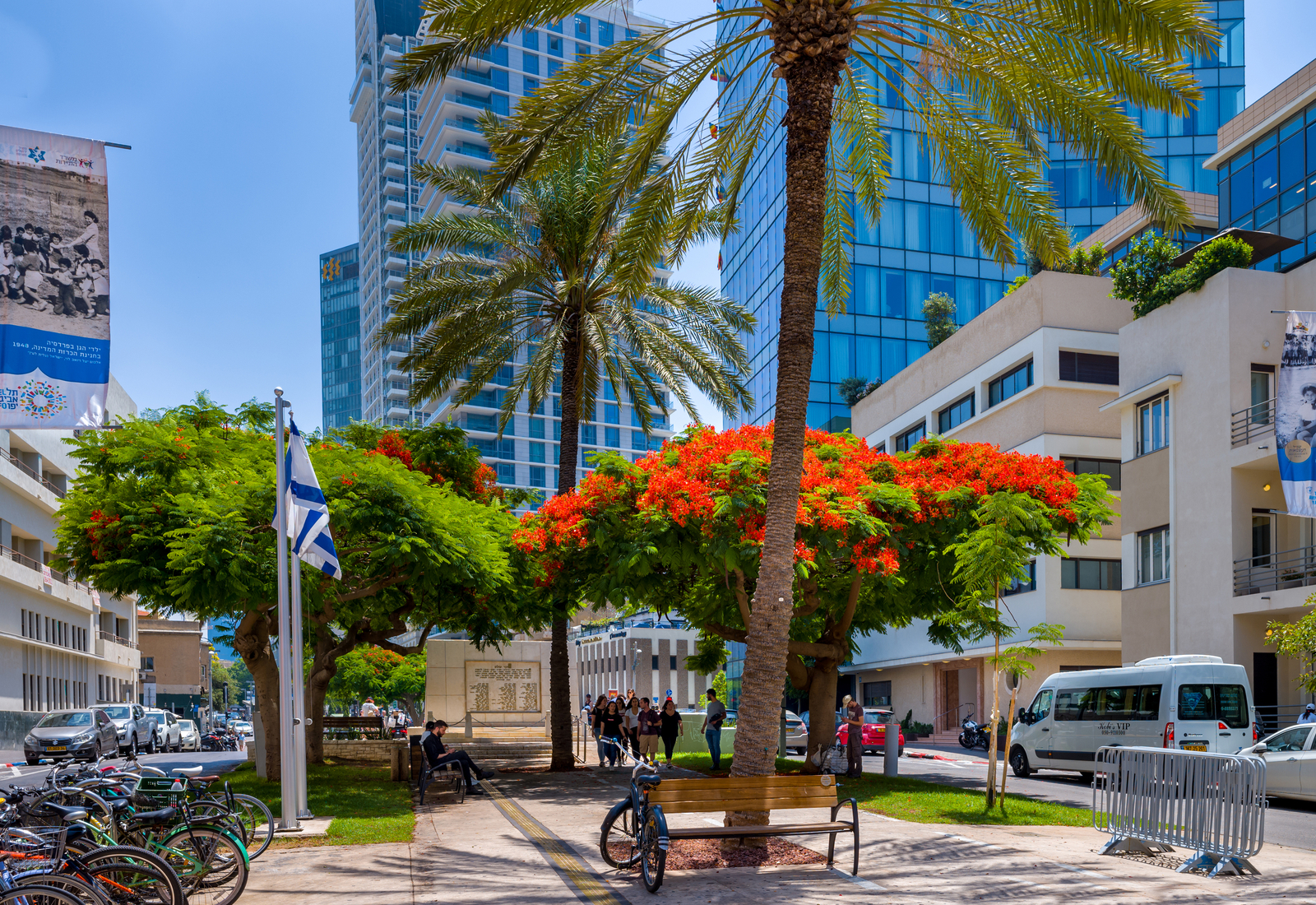 Rothschild Boulevard is one of Tel Aviv's most famous streets, and with good reason. Photo by Boris-b, Shutterstock
#HipMeetsHistoric

The ultimate guide to Rothschild Boulevard

Find out what to see, experience and eat on a stroll down Tel Aviv's most famous and beautiful boulevard.

Rothschild is not only Tel Aviv’s very first boulevard, but also the cultural center of the city.

This picturesque boulevard stretches from Habima Theater to the Neveh Tzedek neighborhood and is shaded by ficus and poinciana trees with pleasant benches scattered at their feet. 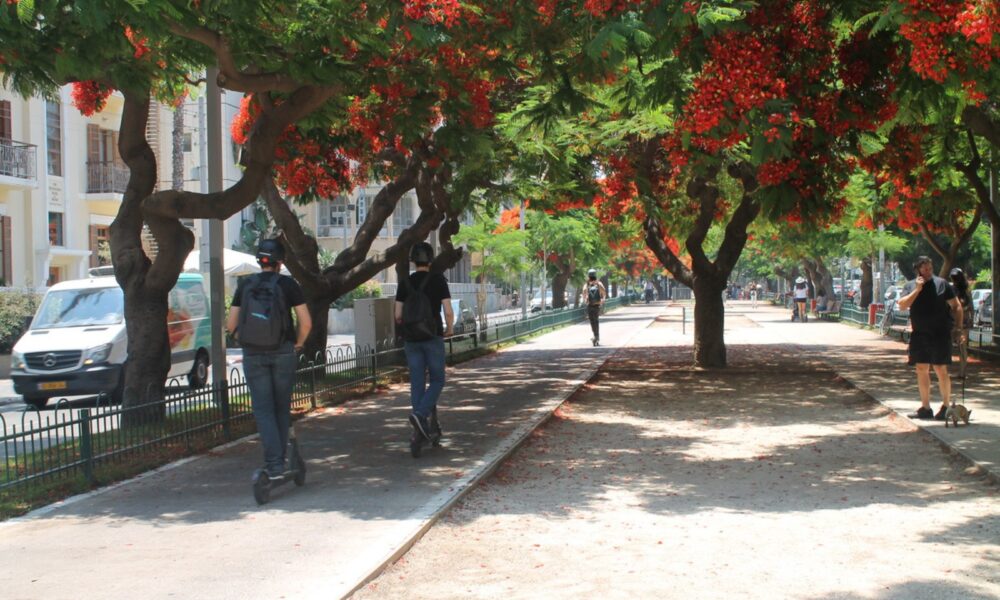 Edmond James de Rothschild, “the Known Benefactor,” was a French member of the Rothschild banking family and known for his support of art, science and the Jewish homeland. Respect for him in the Holy Land was so great, that in 1910 it was decided to name one of the first four streets in Tel Aviv after the baron: Sderot (Boulevard) Rothschild.

Over the years, Rothschild Boulevard became the center of a neighborhood where numerous national leaders once lived and many historic events took place, including the Israeli declaration of independence in 1948.

Rothschild attracts a large and diverse public, from local families and hip businesspeople to young couples enjoying a romantic stroll, and elderly Tel Avivians seeking a spontaneous game of pétanque (a type of lawn bowling).

Check out our guide to Tel Aviv’s most beloved boulevard. 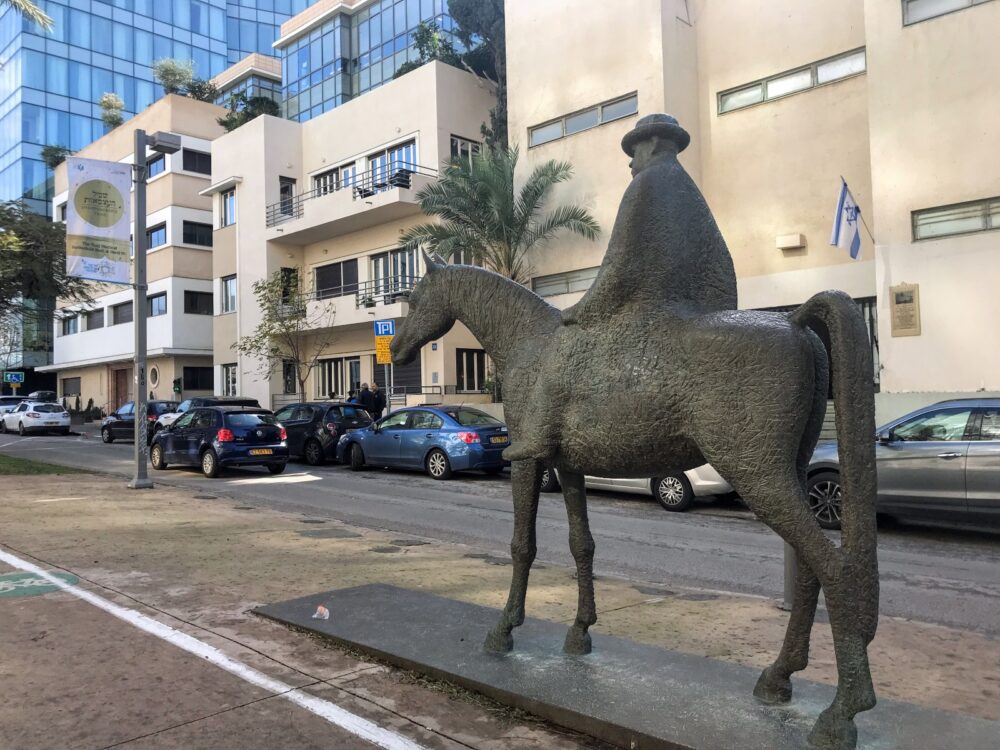 Dizengoff House, or as it is known today, Independence Hall, is located at 16 Rothschild Boulevard. The building was home to Meir Dizengoff, the first mayor of Tel Aviv.

After Dizengoff’s death, the house was transformed into an art museum. This is where David Ben-Gurion signed Israel’s declaration of independence on May 14, 1948. Independence Hall is closed for renovations until 2023.

The beautiful Founders Monument and Fountain, located opposite Independence Hall, were established in 1949 on the 40th anniversary of Tel Aviv. 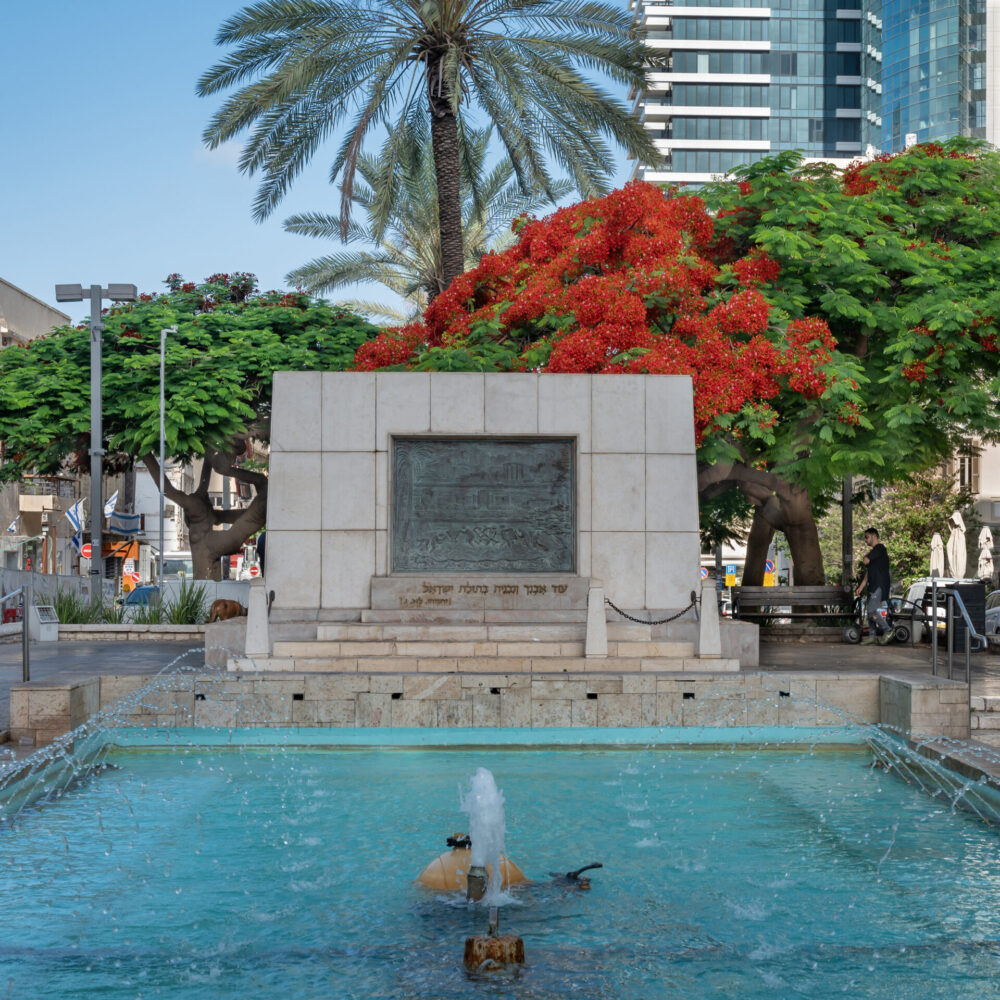 The Founder’s Monument and Fountain on Rothschild Boulebard. Photo by Boris-b, Shutterstock

Tel Aviv’s first food kiosk was built on Rothschild Boulevard in 1910. Soon, a small pavilion was added at the end of each section of the boulevard.

Today, the many charming kiosks scattered along Rothschild Boulevard are one of the most magical attractions of this neighborhood. 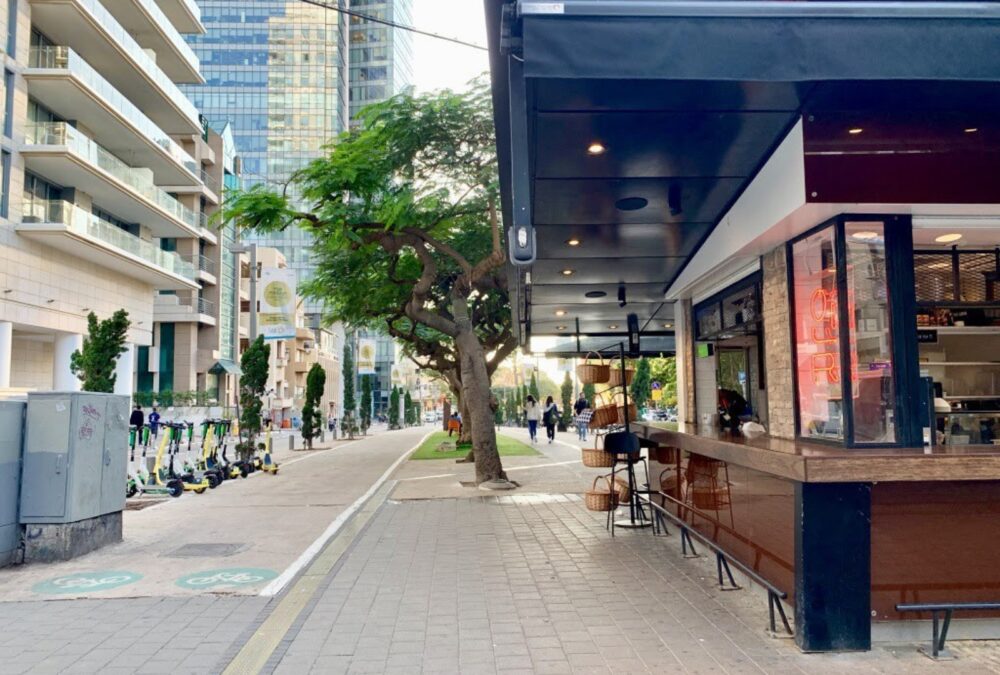 Rothschild’s nightlife scene is no less vibrant. As soon as the streetlights are turned on along the romantic road, it becomes one of the liveliest attractions in the city that never stops. 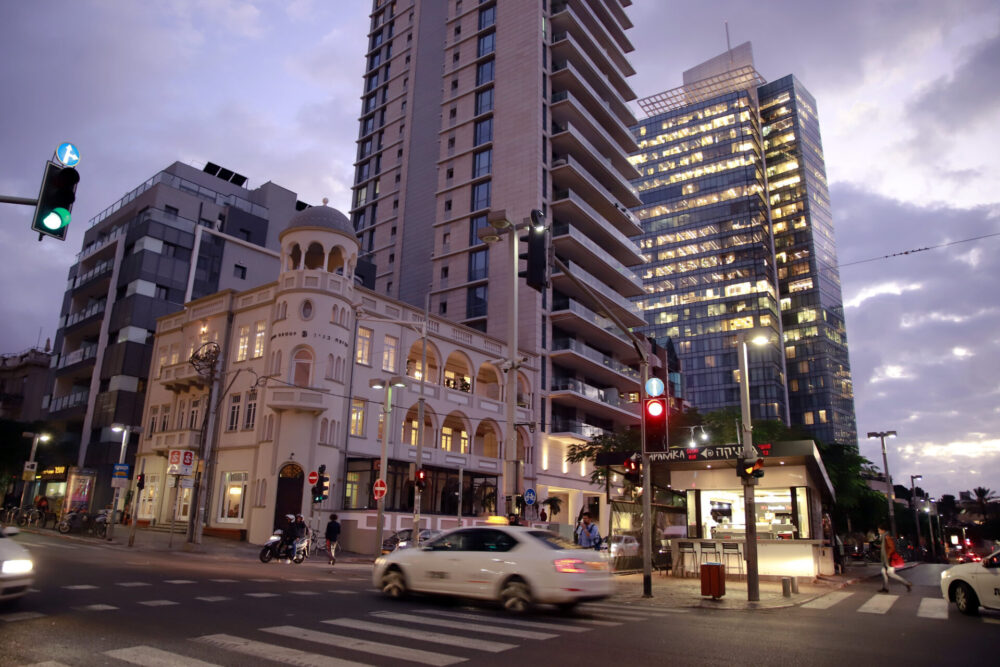 It’s all about the Bauhaus 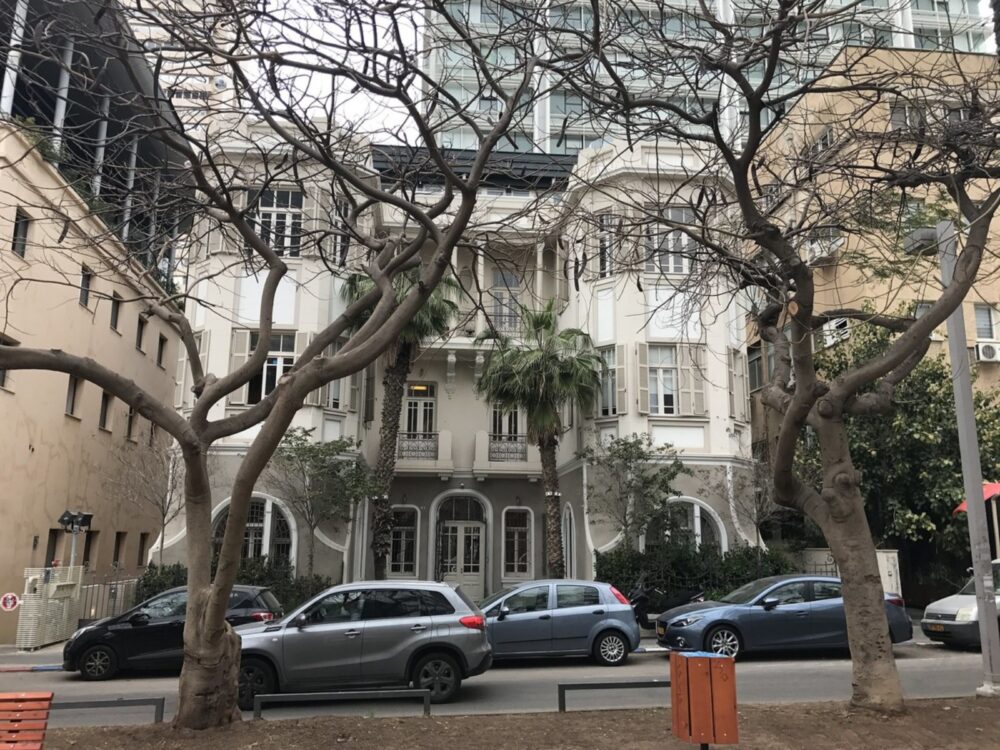 A major reason Rothschild Boulevard attracts many visitors is its abundance of buildings in the  International architectural style, otherwise known as Bauhaus.

The Bauhaus movement was established in 1930s Germany and implemented in about 4,000 buildings in the heart of Tel Aviv — hence the origin of its nickname, the “White City.”

Bauhaus-style buildings can be recognized by their asymmetrical structure with small rectangular or round windows, and the white and rounded facades of the houses and balconies.

One of the most prominent structures built in the Bauhaus spirit of the “White City” is the Engel House, located on 84 Rothschild Boulevard and the corner of Mazeh Street. This iconic building was designed by architect Ze’ev Rechter and is the first house in the city built on pillars. 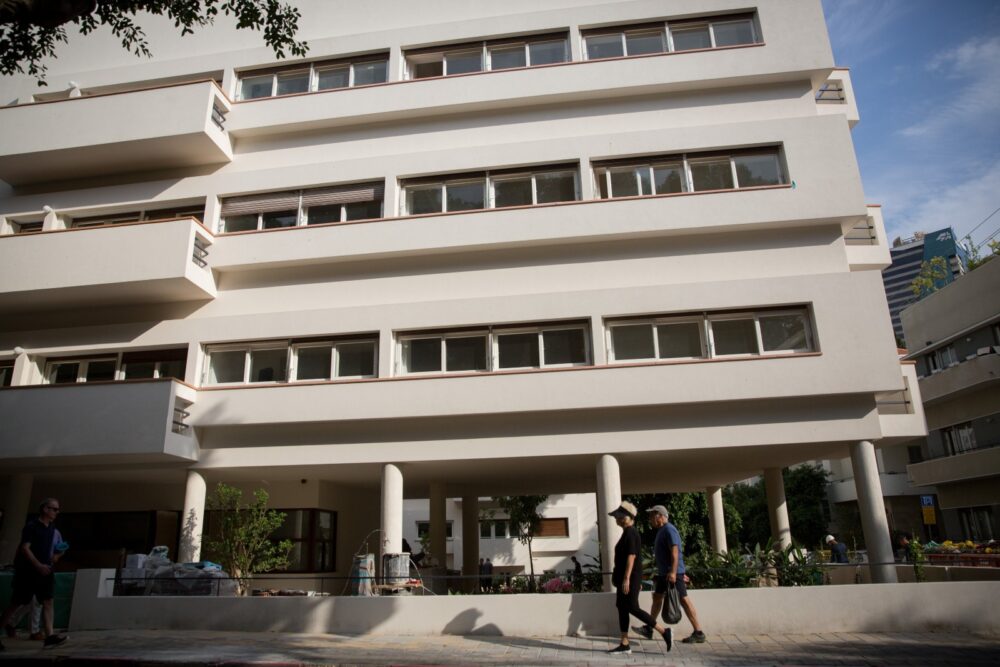 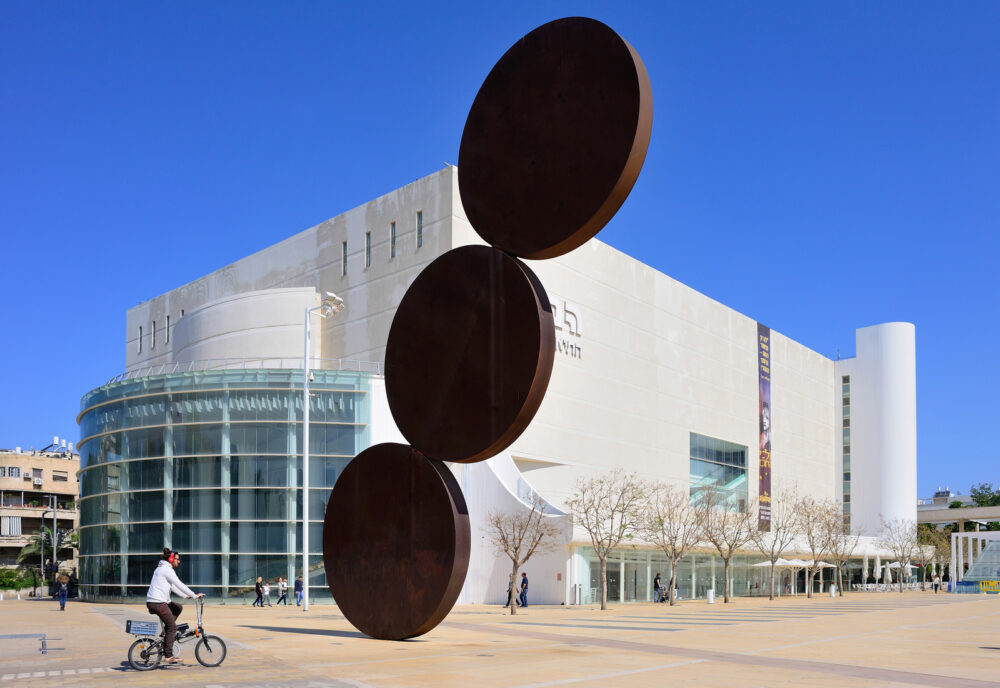 Various sculptures and works of art are scattered along the beautiful boulevard and function as a kind of an outdoor museum.

“Uprise,” by renowned Israeli sculptor and painter Menashe Kadishman, is probably the most famous one. This sculpture, consisting of three metal circles, stands in front of Israel’s national theater, Habima. 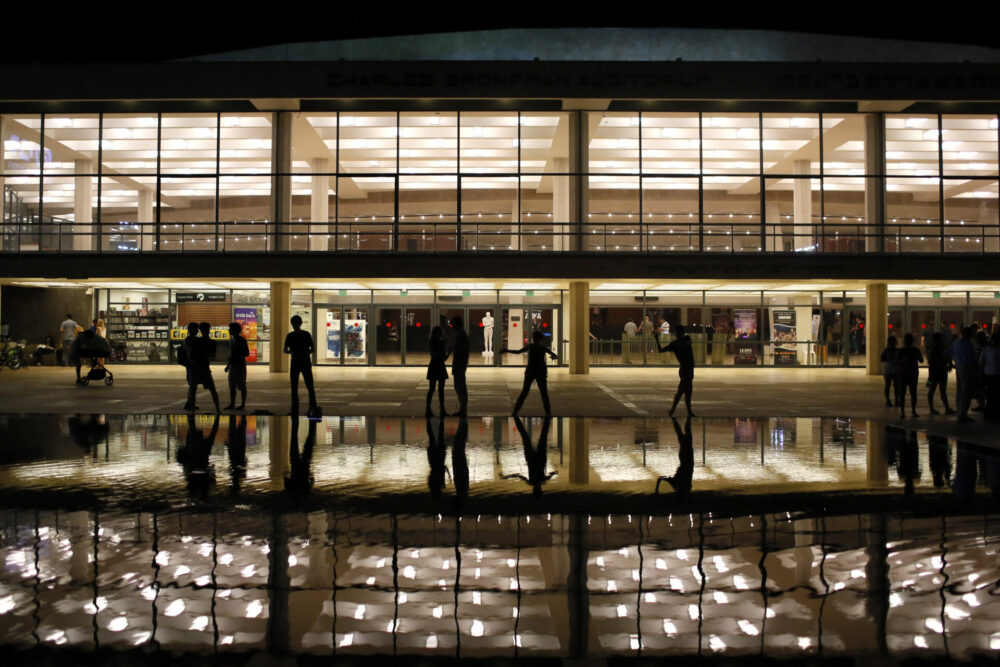 People reflected in a water fountain in front of the Charles Bronfman Auditorium at Habima Square. Photo by Miriam Alster/Flash90

The complex is built in a way that connects several main streets of great importance in the urban structure of Tel Aviv.

In 2007, the multimillion-dollar Habima renovation project began under the direction of artist Dani Karavan. The theater’s original six pillars were exposed and a lighting system in the shape of an umbrella was installed on top, with 10 meters of transparent glass surrounding the building. 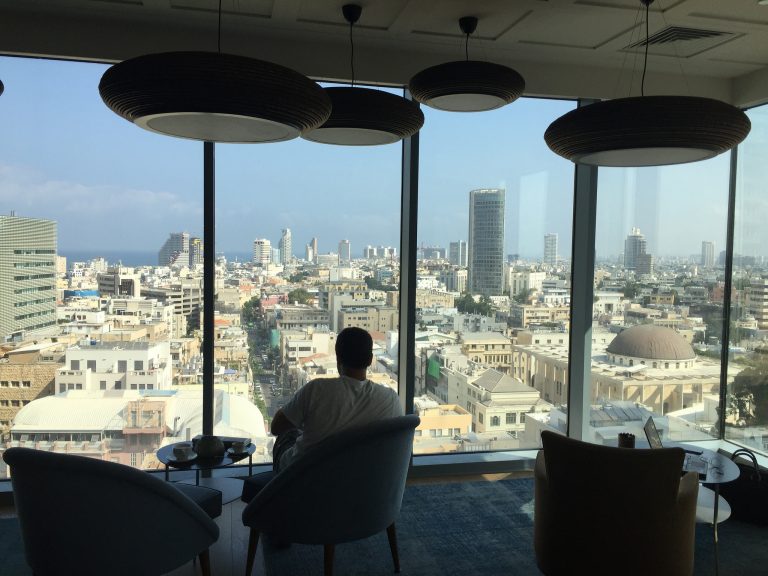 The view from Hotel Rothschild 22. Photo by Nicky Blackburn

Rothschild Boulevard is not only Tel Aviv’s most expensive street; it is also one of Israel’s largest and most prominent business centers.

One of the many impressive sites located along the boulevard is the 29-story Rothschild 22. It houses a hotel and the Facebook Israel offices.

Meier on Rothschild is a skyscraper located on 36 Rothschild Boulevard, near the U-Bank Tower. At a height of 158 meters, this is the second tallest building in Israel used for residential purposes only.

The U-Bank Tower is one of the first high-rise office buildings in the city and was established under the bank’s previous name, General Bank (owned by the Rothschild family).

The tower, designed by the architect Arie Freiberger, stands out thanks to its shape that creates “forks” with blue glass windows separating the tines.

First International Bank Tower is a 32-story skyscraper inspired by the Bank of China Tower in Hong Kong, representing sophistication and economic power. The Rothschild Hotel was designed as a tribute to the vision and Zionist activities of Baron Edmund de Rothschild. Scattered throughout the hotel are subtle hints that are a design and experiential interpretation of his character. The hotel is housed in an eclectic historic building that is one of the most beautiful in Tel Aviv.

Rothschild 22 Hotel is a prestigious and unique boutique hotel in the heart of the bustling Rothschild Boulevard. This beautiful hotel has been meticulously designed and combines a modern and elegant style that blends perfectly with the pastoral boulevard. The hotel’s 156 rooms are decorated in an up-to-date style and provides a peaceful and intimate atmosphere.

65 Hotel is built in the shape of a round glass cylinder, a modern site in the middle of the picturesque boulevard. The charm of the hotel lies in the combination of post-colonial images from the beginning of the 21st century and local touches. At its entrance, you will find Café 65 serving one of the best breakfasts in Tel Aviv.