When Maroon 5 performed in Israel last May, lead vocalist Adam Levine brought an unknown artist up on stage to sing the band’s hit “Sunday Mornings” with him at Tel Aviv’s Yarkon Park to an audience at 70,000.

He introduced her as “That street musician who did not know that I would come knocking at her door and have her come play with us.”

In the street below Levine’s hotel, Bismuth was performing covers as she has done every Saturday for the past four years. Her versatile repertoire ranges from folk to R&B and soul.

Levine recalled that she “played for hours, and I couldn’t get enough, such a soulful, beautiful voice. And then she started playing one of our songs, ‘Sunday Morning,’ and she killed that. So I asked her to come perform.”

“He videoed me and put it up on his Instagram story,” Bismuth explains. “He invited me by Instagram to appear with him that evening [at the Maroon 5 concert].”

Of finding herself on that stage, “There are really no words to describe that moment,” she says. “It was like cutting through boundaries.”

She belted out the first few verses of “Sunday Morning” solo, as Levine gave her the spotlight before joining in.

“I felt that many people were inspired by my story,” says Bismuth.

“It touched them that if you believe with all your heart, with love, and you make your efforts; in the end, the Universe pays attention to you. Something happens. Some call it a quantum leap. For me it was a dream come true. The winds enjoyed my prayers.”

Bismuth’s first public appearance was at age 16 on reality show “The Voice.” Yet she hadn’t even dreamed of becoming a musician until a year earlier.

It all started because there was a classical guitar at home. One day she picked it up and started playing.

“From the very first moment I began to strum, I thought, ‘I’ve got this.’ There was an ease in learning how to play.” Her major influences include John Mayer, the Beatles, Jimi Hendrix, Tom Lynch, Lianne La Havas and Beyonce.

Her father incentivized her to keep practicing, by promising to get her the black acoustic guitar she had her eye on. 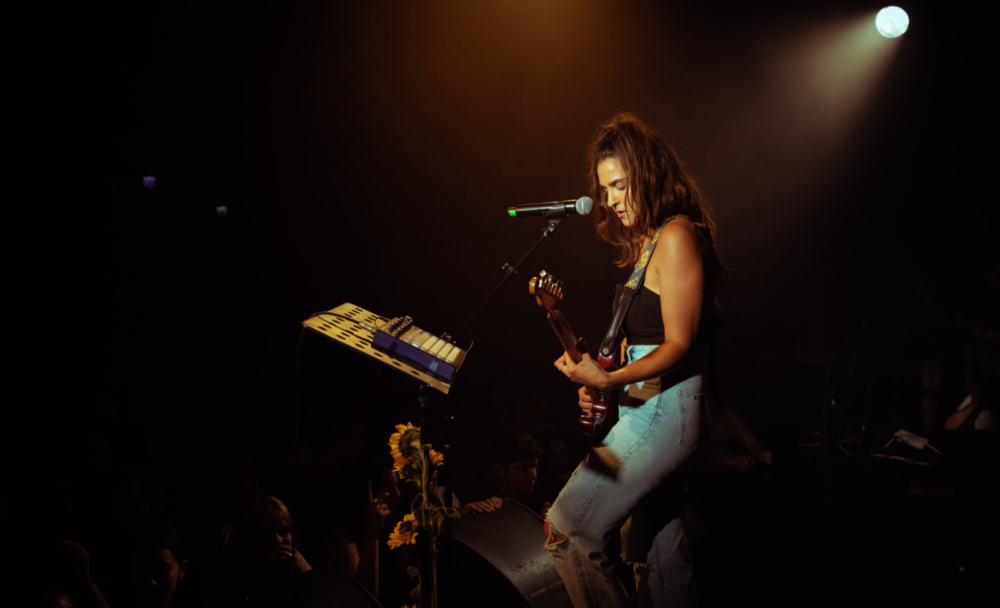 She never studied music officially, except for private guitar and voice lessons.

The singing came after the guitar.

“My attitude is that I learn what I need to know, but not in an institutionalized manner. I tend to learn on a need-to-know basis. That is also how I learned to write music. I always feel I am at the school of my life,” Bismuth says.

“I was in love with playing, and then I began to accompany myself with song, in order to hear the music.” 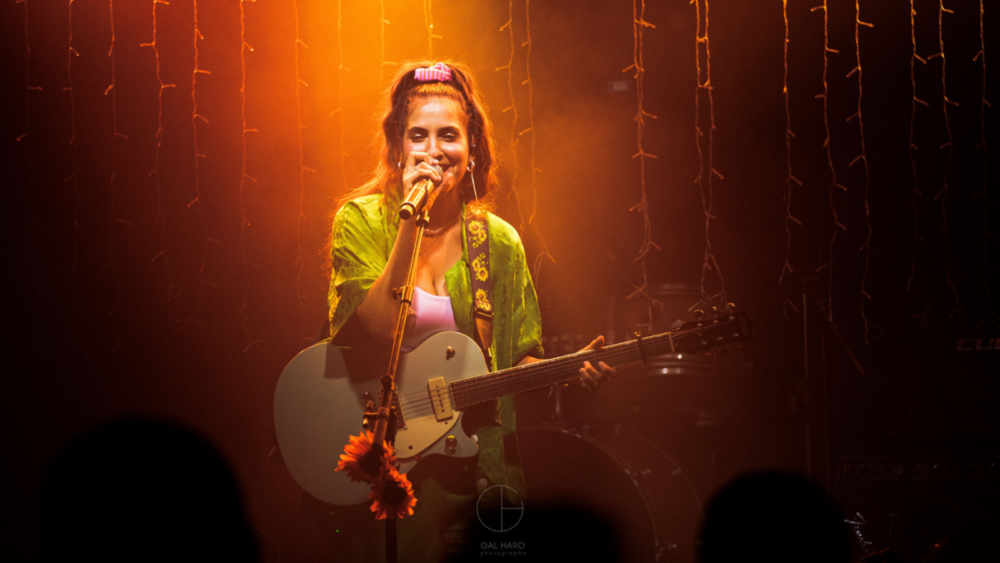 She uploaded videos of herself to YouTube and was spotted and contacted by producers of “The Voice.”

“I found myself on a large stage and I got a real boost from all the power and energy emanating from the audience, the clapping; it made me realize that I really love this.”

Bismuth released her first album within two years of her performance on “The Voice,” at age 18, with her parents’ help.

At 21 she moved to Tel Aviv to develop musically. But within two months a spontaneous invitation led to her accompany a Canadian musician friend on the streets of Italy.

“I discovered street musicians’ performances for the first time! I experienced the magic,” she beams. 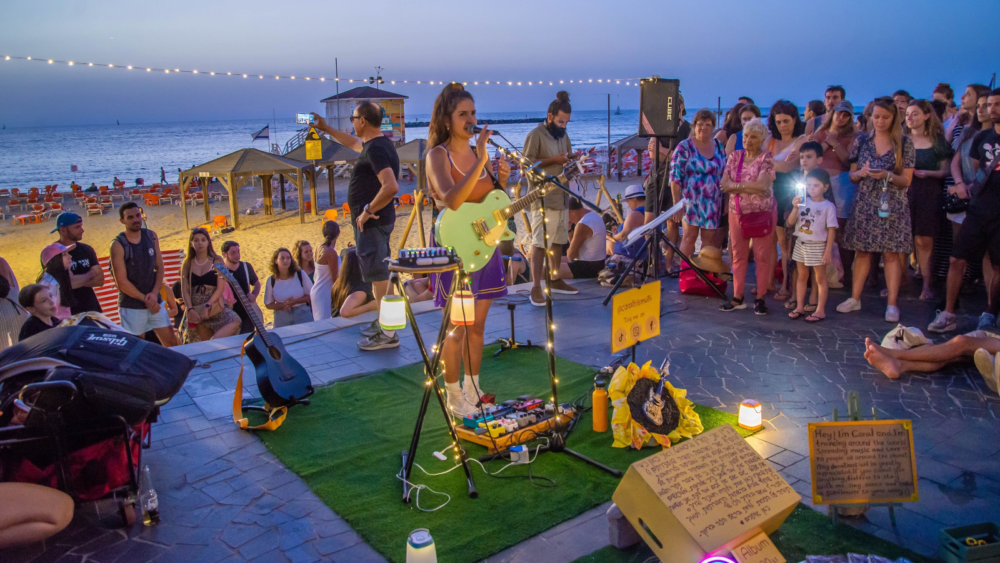 Coral Bismuth performing on the beach in Tel Aviv. Photo by Manu Greenspan

Europe was a turning point for Bismuth. At first, she worked assisting her friend, but at a certain point she says, I finally “got it.”

“I understood that I could leave my home, simply go out into the street, and just do what I do at home anyway, which is to play and sing, and actually make money from it, and connect to people and create a sort of wheel of energy in the street.

“If you believe in something, be behind it. Be fully behind it. If a person gives their all to something, the Universe will come towards you. If that energy comes out, it will also come back to you.”

“It really touched me and moved me and I felt that in a way I had been able to exit the matrix. I didn’t have to work as a waitress or anything like that anymore. I simply made my music.”

After six months, Bismuth came back to Israel, “full of this energy, ready to spread it.”

A pioneer in Israel

Four years on, she gives three-hour-long street performances three times a week across the entire country “from Eilat to Tzfat.” She encourages other would-be street musicians to “go and play.”

That “unforgettable night – one of a kind” in May on the stage with Maroon 5, Bismuth felt as if everything she had ever done until that moment, “all those hours in the street,” were the path to finding herself performing in front of 70,000 people.

“And the really cool part about it,” she says: “I was about to release an album and needed to publicize it. It’s as if the Universe heard that I needed people to know that I had an album coming out and gave me a platform of 70,000!”

Prior to the serendipitous event in May, the singer-songwriter had also booked her first concert at the iconic Barby club for July.

She put together her own band ahead of the show: Nadav Luzia on drums and production; Yair Ofir on bass; Eran Goldberg on keyboard and vocals; and Igal Kadosh on guitar and vocals.

“Performing at the Barby was wonderful,” she said. “It was super moving to get up onto my own stage, with lights and people and clapping. I even teared up during the performance.” 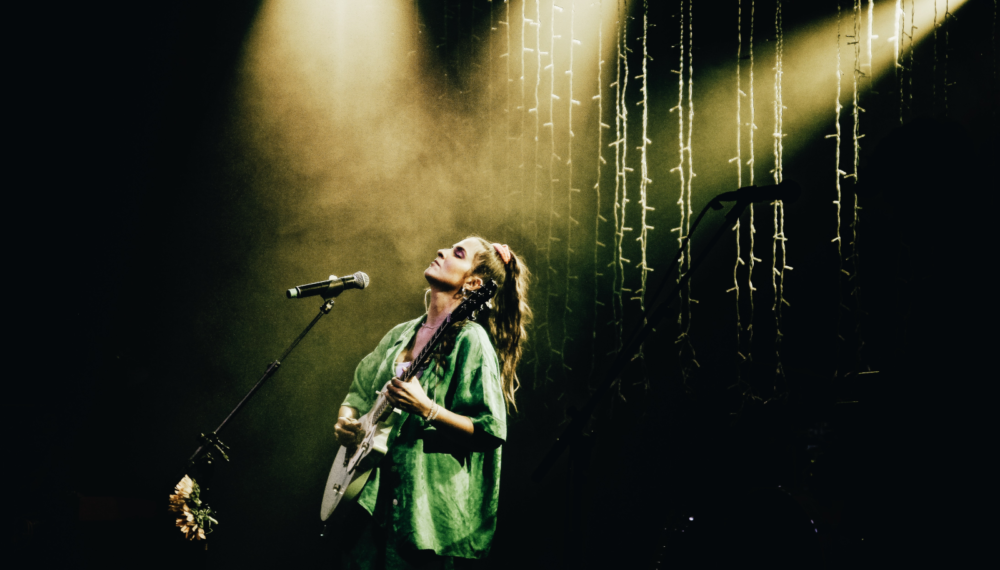 At her street concerts, Bismuth has a bucket of sunflowers with a sign that reads: “Sunflowers: Take, and give as much as you can. If you cannot give, feel free to take.”

Sunflowers are symbolic for Bismuth, who likes to offer her audience something tangible to take home. 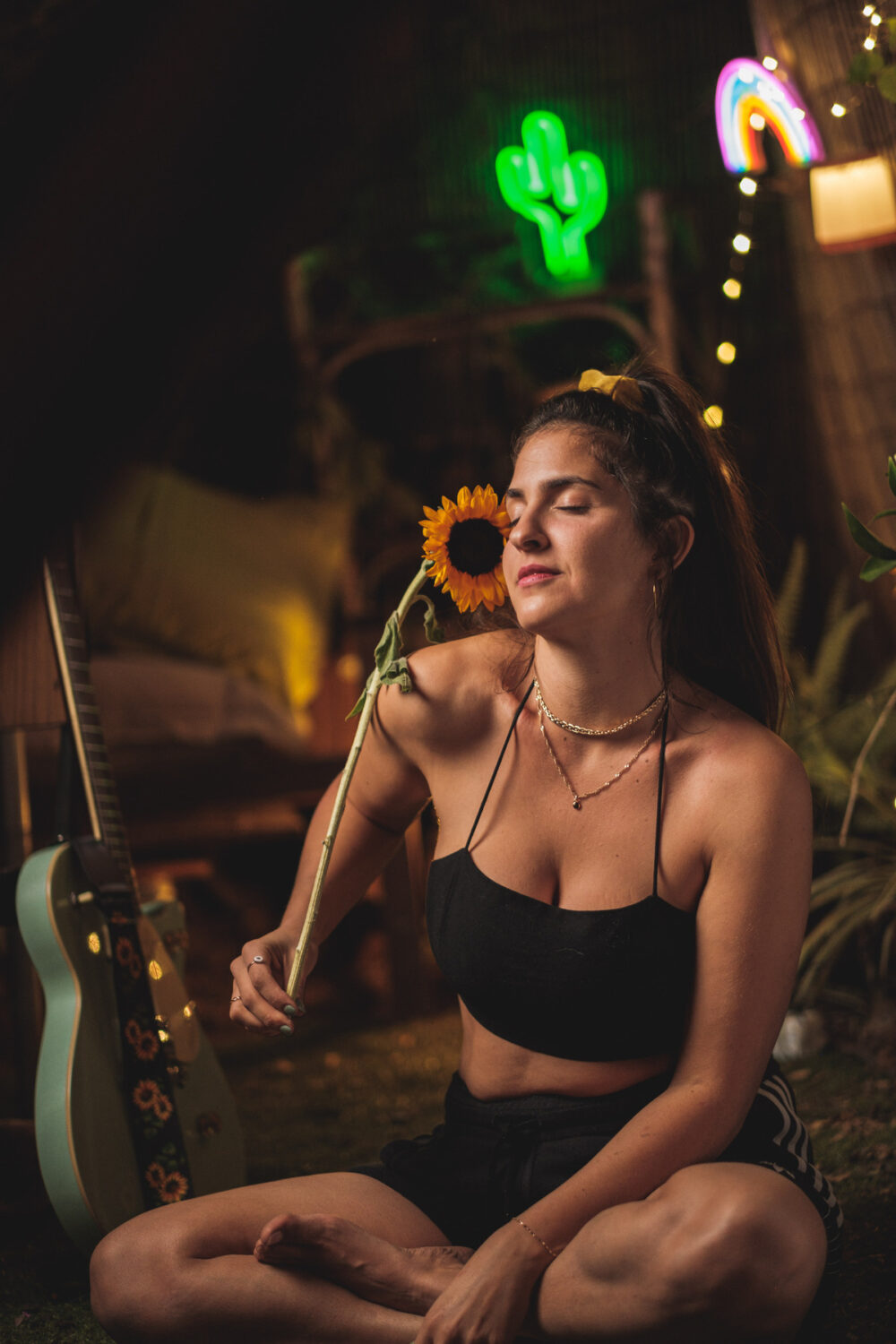 Coral Bismuth is known for giving out sunflowers to her audience. Photo by Gal Aharonovitz

“Sunflowers live from the sun and turn their faces towards it. Sometimes, performing, I feel like the sun, shining out onto sunflowers. And sometimes, if I am having a harder day and I still choose to go out and perform, I feel like I am one of the sunflowers, enjoying and strengthened by the power of my audience.”

“If you believe in something, be behind it. Be fully behind it. If a person gives their all to something, the Universe will come towards you. If that energy comes out, it will also come back to you.”