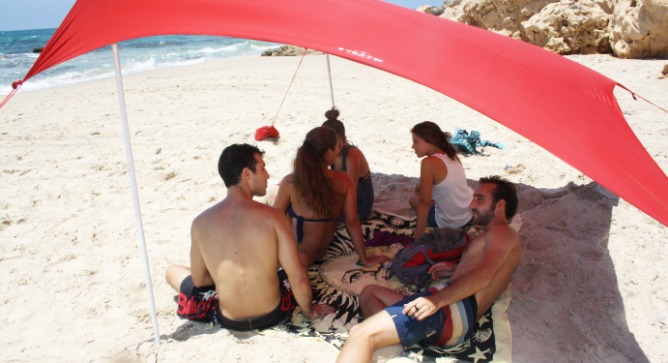 Setting up an event on the beach, an Israeli outdoor events planner couldn’t help chuckling as he and others tried to keep strong winds from blowing down the tents they had just erected. This ridiculous scenario would spark an idea that could change beach culture the world over.

Ilan Elmaliach, a 33-year-old first-time inventor, created a portable aerodynamic sunshade that is easy to use and has an ultraviolet protection factor of 50+.

While there are dozens of similar products on the market, Elmaliach says his Israeli-made, patent-protected Otentik is exclusively designed to flow with the wind and not fight against it – rather like a parachute.

“I come from the world of skydiving,” Elmaliach tells ISRAEL21c.

Otentik has no stakes or pegs to drive into the ground. Instead, an anchoring bag on each corner gets filled up with sand (or, if you’re on hard ground, rocks).

The material – imported from Italy and upgraded in Israel — is then stretched to its maximum, and support poles hold it up. While it sounds like a no-brainer, Elmaliach says it took two years for him to perfect the invention, which provides enough shade for five adults.

“My friends say it’s like a drug — you can’t go to the beach without it,” says Elmaliach, a huge fan of the great outdoors.

Global cancer studies have shown that the incidence of cutaneous melanoma – a serious form of skin cancer — is on the rise across the globe. Rates have tripled over the last decades in the United States, and even more so in Europe.

These scary statistics helped fuel the worldwide trend of bringing your own sun shelter to the beach.

“One of the most important means of protection against the sun’s harmful rays is staying in the shade,” Israel Cancer Association spokesperson Edna Peleg-Olevsky tells ISRAEL21c. “Unprotected sun exposure can damage one’s health. That’s why it’s recommended to seek shade at the beach or swimming pool, and to sit under a parasol or sunshade, or any other form of protection.” 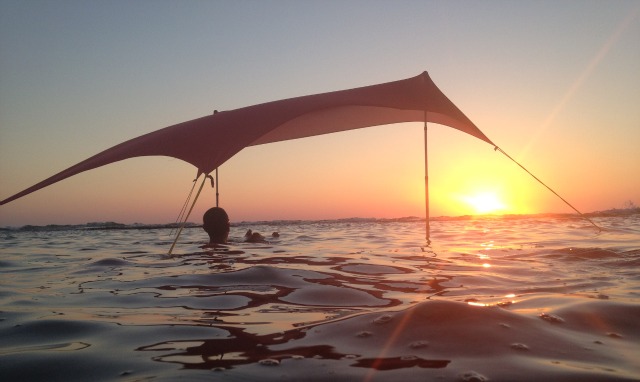 This sunshade can even be set up in the water.

But beach umbrellas are not well-anchored, and can be bulky to carry. In the same way that Israel changed the swimsuit world with Gottex, blue-and-white creativity could now change the beach experience.

It was actually a second gust of wind that blew this film graduate-skydiving instructor to act on his initial idea of finding a solution to holding outdoor events in all weather conditions. He was camping on a beach with a friend when strong winds blew their tarp shelter away.

“Without thinking, I took plastic bags and filled them with sand and tied them to the tarp,” he recalls. “When we got home, I Googled the idea of sandbags and saw that in 1936 someone wrote about it. I looked for something similar on the market and when I couldn’t find anything, I set to work on the patent.”

Through trial and error but with 11 years of skydiving, parachute and wind experience, Elmaliach found the secret to success in strong swimsuit material imported from Italy (which is lightweight and resistant to sand, chlorine and saltwater); support poles imported from China; and made-in-Israel rope and supplementary material. The sunshades are put together at a sewing workshop in the Druze village of Peki’in.

To prove Otentik’s sturdiness, Elmaliach used his film skills to create a short video on YouTube showing how it bears up against strong winds. That scored him 31,000 hits so far.

Otentik – a play on the words “tent,” “tik” (Hebrew for “bag” and being able to set something up quickly), and “authentic” – has only been on the market for one year but already claims thousands of fans. 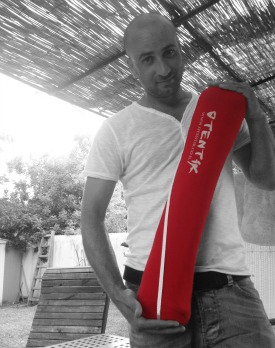 Elmaliach says he’s received orders from “Brazil, Australia, New Zealand, Spain; just about every country with a beach culture. Next summer we’re hoping to expand to the US.”

The inventor grew up in a family of seven children in the port city of Ashdod, and now resides in Mikhmoret on the Mediterranean coast. “To say this is an Israeli product gives me a great sense of pride,” Elmaliach says.

Otentik was officially registered in July 2013. Before that, Elmaliach produced the product for the Guy Ofer woodwork company – run by his eldest brother and business partner. The two gave Elmaliach financial backing at the end of 2010 when he first started.

“The success we’ve had so far has totally surprised all of us — my friends, my family, and me. That people bought it and recommended it. That people are calling it product of the year. To hear this, it makes me feel great,” he says.

Elmaliach isn’t planning on being a one-hit wonder. He has other ideas in the works for improving the beach experience, though he isn’t ready to share them yet. However, they will probably follow Otentik’s lead in ease of use. “The best things are the most simple,” he says.