Ahh. That first taste of tahini. Sweet, peanut-buttery, smooth…That first taste was the moment that Jackie Zitelman’s two sisters, Shelby and Amy, will always remember from their visit to Israel.

It was in 2011 when Jackie, an American living in northern Israel, took them to visit her mother-in-law, who served them a carrot cake that seemed to have a secret ingredient.

“My sisters thought the cake was delicious and then they asked what was in it,” Jackie tells ISRAEL21c. “Tahini!”

The three sisters, whose parents were successful entrepreneurs, looked at one another and had a collective thought: “How come in America we only get tahini in a tin can that sits on the bottom shelf in a grocery store?” At the time, Americans were starting to embrace hummus, in which tahini is the second ingredient next to chickpeas. The National Football League announced in 2013 that hummus was its official dip.

The sisters’ privately owned company, Soom Foods, was founded that year and now sells in over 900 stores around the United States and Canada.

Their tahini has received rave reviews from chefs across America. Their products — both plain and a version with dark chocolate and sea salt — are sold in the Whole Foods chain. Jackie and Amy Zitelman were named to Forbes 30 Under 30 in 2018 (Shelby was already past 30).

More than a sauce for felafel

Interest in tahini has taken off meteorically. The sesame paste used to be like Cinderella, working behind the scenes, unacknowledged.

Jackie said that few people appreciated it or really knew of it. Even her husband, who grew up in Israel, thought of it as “the sauce you put on felafel and shawarma.”

“We say that the three of us each bring brains, voice and heart to our work,” Jackie said. “Shelby, 37, who has a business degree, is considered the brains. Amy, 33, is the voice since she studied interpersonal communication. And I’m the heart, since I fell in love with a man who sold tahini.” 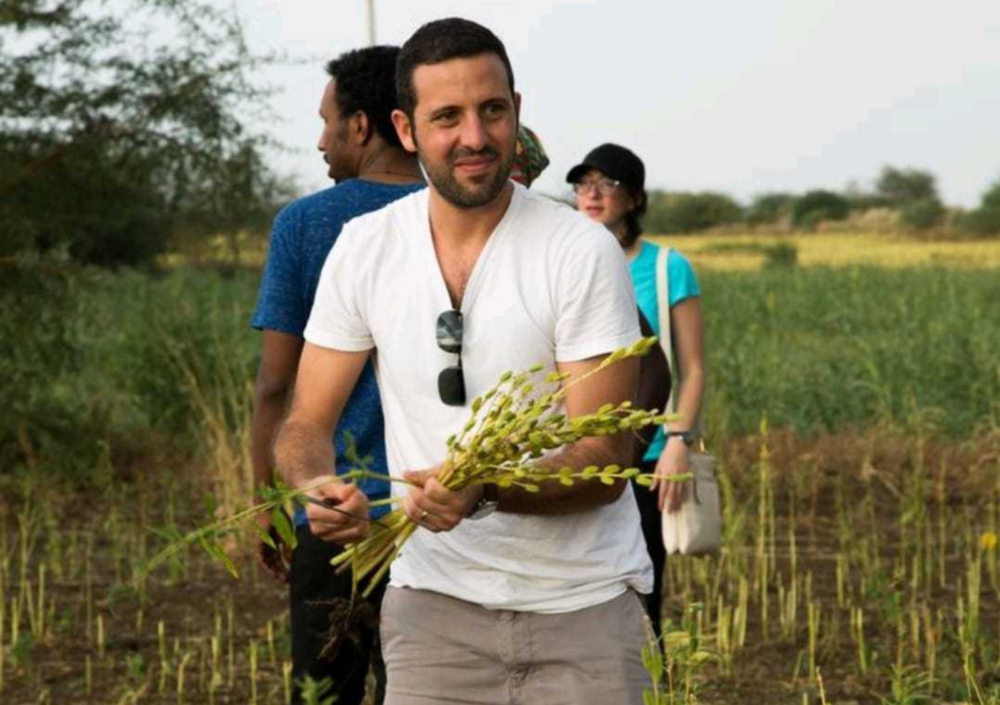 Omri Horvitz in the sesame fields in Ethiopia. Photo courtesy of Soom Foods

Curious about trying to introduce tahini to America, she and Shelby asked Amy to do some market research.

“‘What does ‘market research’ mean?’ Amy asked then,” her sister said with a laugh. “It’s very funny because now she’s the CEO of our company and back then she didn’t even know what it was.”

What Amy learned was that there was virtually no high-quality tahini available in America.

“You only found a few brands in the ethnic aisles of supermarkets or in small Middle Eastern grocery stores,” Jackie said.

The sisters “figured out how much it would cost to produce, to package, to ship to America, and how much we could sell it for.”

“Shelby came up with the name because soom-soom is the Hebrew word for sesame seeds,” Jackie explained.

“In 2013, we got our first container of our own tahini. We wanted to be more authentic and call it techinah, the way it’s pronounced in the Middle East, but nobody could say it — so we went with what people knew.”

In the beginning, the sisters in America delivered containers of their tahini themselves.

They got their first boost in sales when Amy, who lives in Philadelphia, brought their tahini to local celebrity chef Michael Solomonov at his award-winning Zahav Restaurant. He loved it.

“Amy told him, ‘I have five buckets in the back of my Prius,’” Jackie said. Solomonov bought them.

“The grocery store owners loved her because she would not only sell them tahini, she’d end up shopping and buying a lot in their stores,” Jackie said.

Business is in their blood

“We were young and naive when we started,” Jackie said.

“We got a friend to make labels and we printed them on a computer, cut them out and taped them to the containers.”

She said that because both of their parents are entrepreneurs, “business is in our blood. We used to go to work with each of them.” However, the sisters promised one another that if this business “gets in the way of our family, we’ll stop. Family comes first.”

Today, Shelby has gone back to working at a private equity fund. Jackie is now chief procurement officer, handling relationships with manufacturers, and Amy is the CEO, based in Philadelphia.

Up until 2020, 80 percent of their business was to the food service industry, restaurants and catering companies.

When Covid-19 hit, the sisters thought, “Oh no, what are we going to do?” They realized that people were doing their shopping online, so Soom went online as well.

The website features recipes like Smoky White Bean Burgers with Tahini Special Sauce and Lemon Beet Tahini Wraps. The product has been praised in The Wall Street Journal and O, The Oprah Magazine, as well as Bon Appetit.

“We took a basic Israeli product and Americanized it,” Jackie said.

When the sisters started out, they thought they would get their finished tahini product from a factory in Ethiopia, where the sesame seeds are grown, but the bureaucracy was too complicated.

The company’s tahini is now produced in a factory in northern Israel that is owned by an Israeli Muslim.

“From day one we had our standards about the quality,” Jackie said. “We’re not a political company, we’re just a company. We just deliver the best product to our customers.”

Her husband transitioned from selling tahini to selling sesame seeds from Ethiopia to tahini factories in Israel, the Palestinian Authority territories and Gaza.

“He has clients all over,” she said, adding that the region has some of the best tahini in the world. 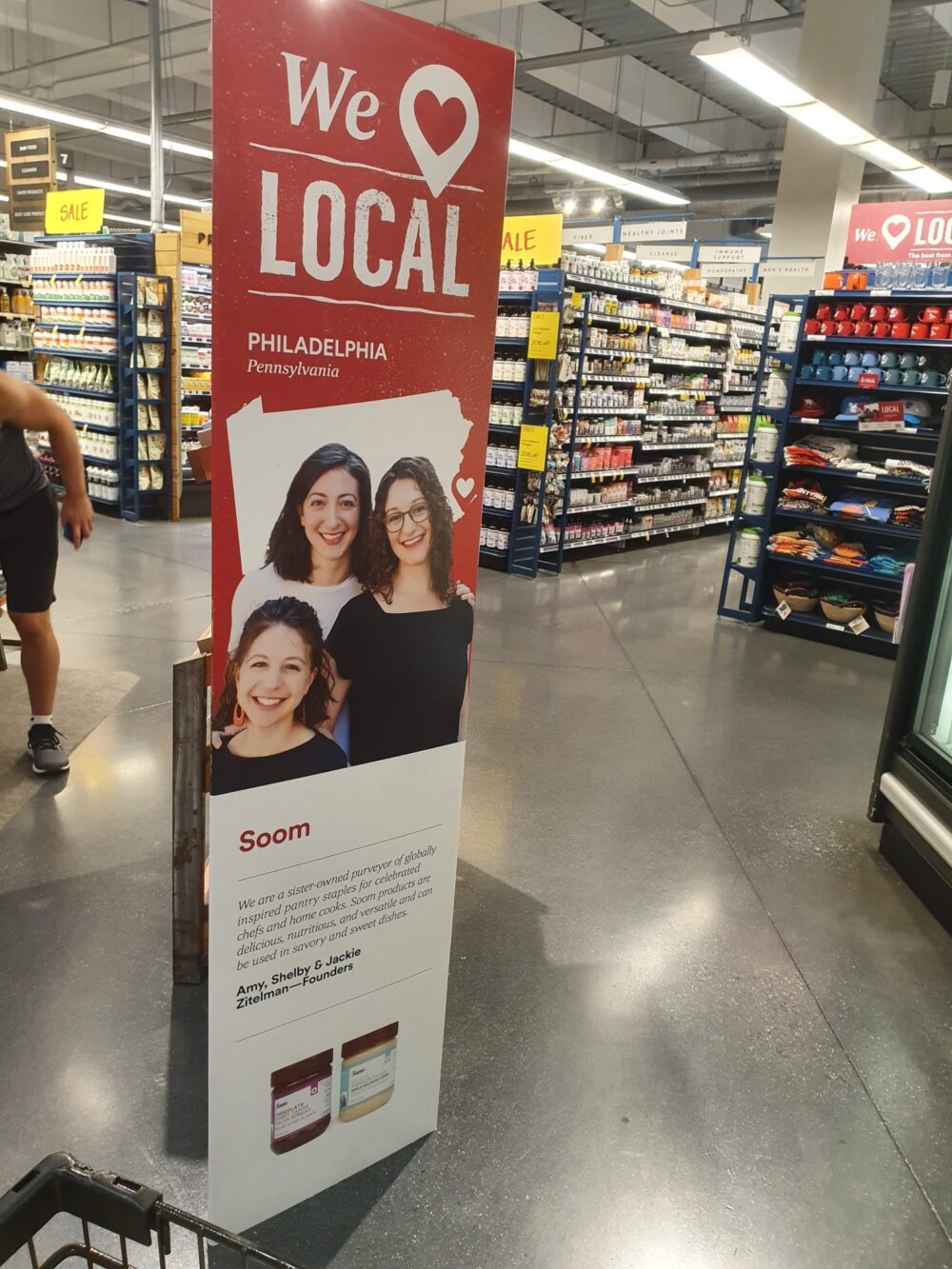 Jackie Zitelman was pleased to see this in-store ad when shopping in Philadelphia. Photo courtesy of Soom Foods

Jackie grew up in Rockville, Maryland, came to Israel on a gap year in 2006 to volunteer with children, and found after she returned to the United States that she missed Israel. She came back to attend IDC Herzliya (now called Reichman University) and stayed, receiving a master’s degree in environmental studies at Tel Aviv University.

On a trip to the United States last summer, she was reminded of how far she and her sisters have come.

“I was shopping at Whole Foods in Center City Philadelphia and suddenly, I saw a huge photograph of myself and my two sisters on a banner advertising our tahini.”

“We really started the wave of introducing tahini to the American market,” she said. “Our goal is for Americans to get to know and love tahini the way they love hummus.”