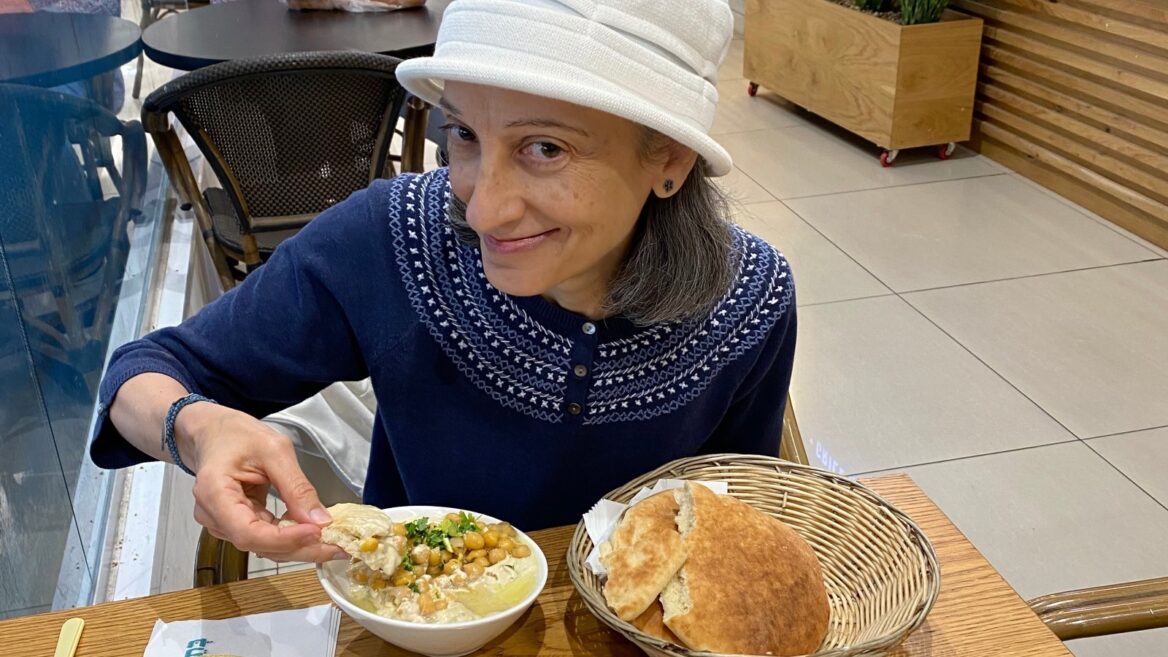 It’s 7:30 on Friday morning and I am massaging a bowlful of chickpeas in water.

After discarding the skins that rise to the top, I pour the beans into my food processor along with raw tahini, fresh lemon juice, pink Himalayan salt, a splash of olive oil and a dash of cumin. (Yeah, I skip the garlic. I know that’s a culinary crime. Shoot me.) 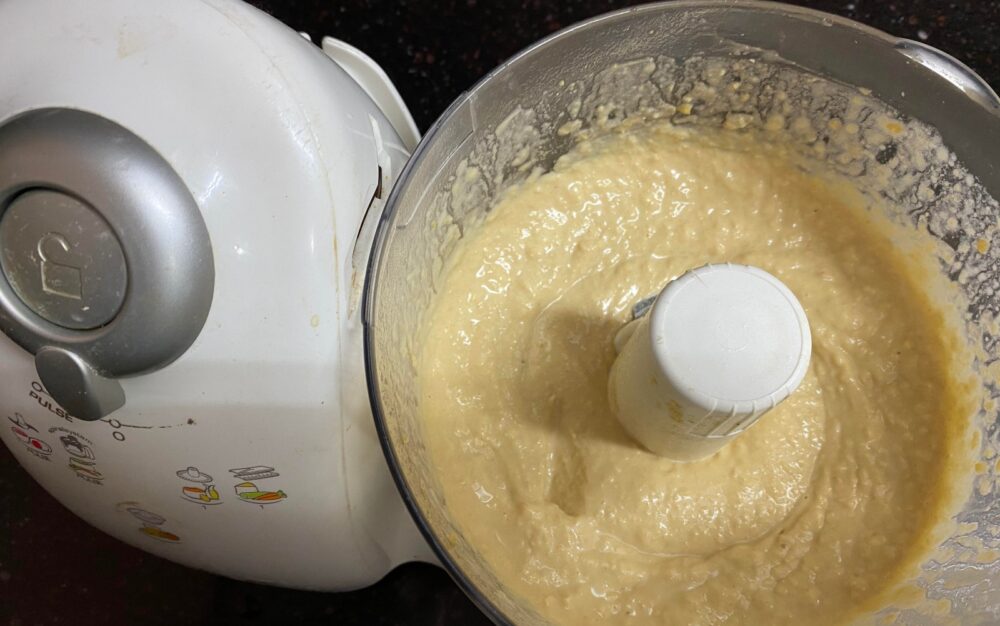 Hummus in the food processor. Photo by Abigail Klein Leichman

I could save myself time and effort by walking five minutes to the makolet (grocery) and choosing a tub of hummus from the many brands and varieties stacked up in the refrigerated section.

I will not do that. Because I am a hummus snob. 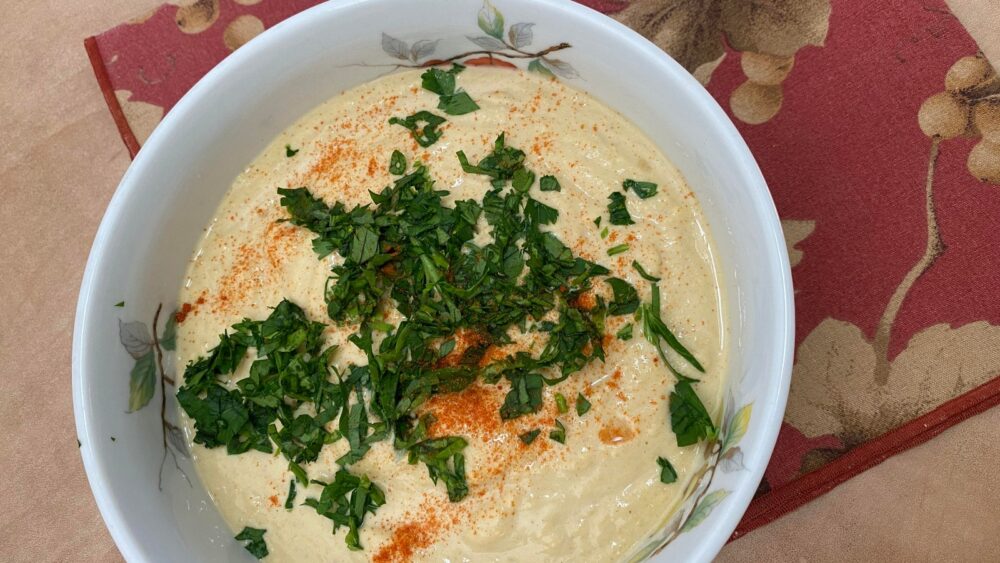 It wasn’t always like this. Before we moved to Israel in 2007, hummus was becoming a popular supermarket item in the United States.

My coworkers of Irish, Italian and Korean heritage were enthusiastically dipping chips and carrot sticks into plastic containers of what they called “hum-us” as if referring to something you sing rather than eat.

Being of Semitic extraction, I knew this delightful dip is pronounced “khoo-moos.” Yet I didn’t know that the stuff we were buying in New Jersey had only a passing resemblance to the real deal.

Soon after our arrival in Israel, we invited some of our teenage daughter’s Israeli friends to Shabbat lunch. I was proud of setting on the table what I naively believed to be a respectable plate of hummus topped with an artful drizzle of olive oil and a sprinkling of za’atar and paprika.

Then I noticed our guests staring at it suspiciously. One friend took my daughter aside. “Is that store bought?” he asked.

Her friends advised that if we insisted on serving commercial hummus, we should at least purchase the “Abu Ghosh” style, based on the world-famous hummus in this Arab city outside Jerusalem. 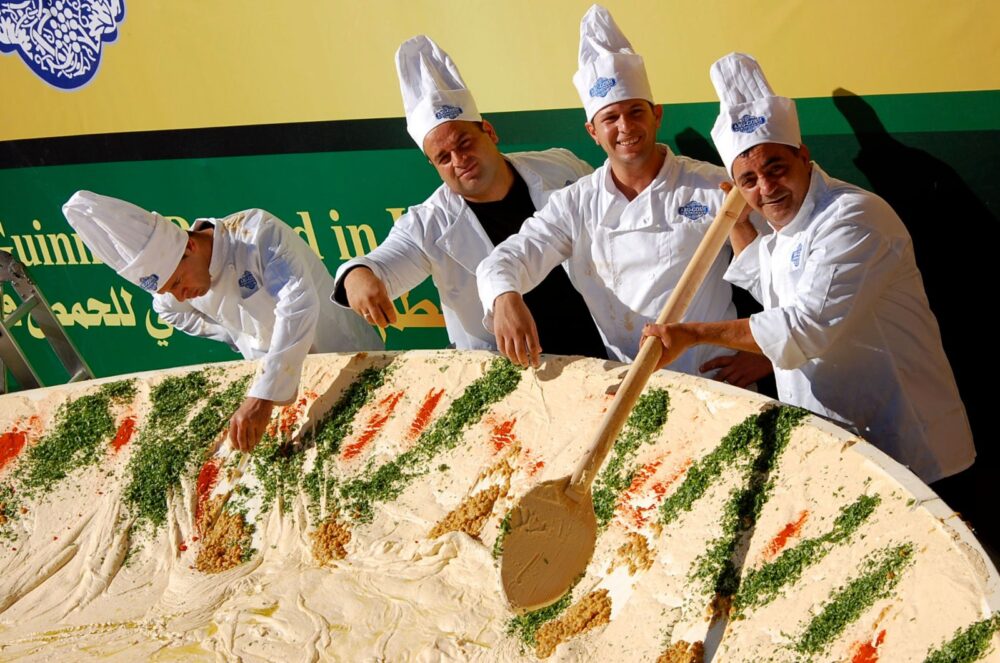 Employees of the Abu Gosh restaurant prepare a 4-ton bowl of hummus with the goal of attaining the Guinness World Record title. Photo by Rachael Cerrotti/Flash90

And then I discovered the hummusiya.

You don’t have to be vegan like me to fall in love with these divine culinary establishments, which build a simple, nourishing, satisfying, delicious meal from the chickpea up. 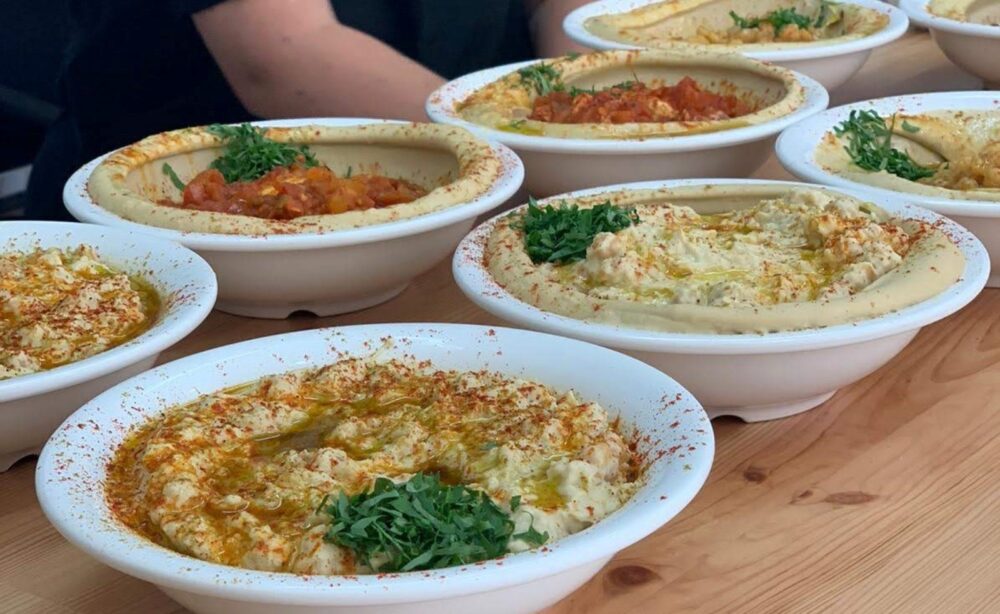 This is not white-tablecloth dining, folks. This is a hearty, rustic, no-cutlery experience centered on plates of fresh, creamy, warm hummus begging to be scooped up by chunks of fluffy hot pita or laffa and accompanied by a fine-chopped cucumber-tomato salad.

You can order your hummus topped with beans, hot spices, parsley or cilantro, hardboiled egg, grilled eggplant, pine nuts, falafel or shawarma, extra tahini or other options. Or take it naki, Hebrew for “clean,” or unadorned.

Once I tasted the genuine item, there was no going back.

The supermarket stuff became vile to my taste buds. The texture was gluey. The aftertaste of preservatives was bitter on my tongue. (And don’t even get me started on Americanized hummus varieties like “pumpkin pie,” “sea salt caramel,” “smoky chipotle” or “Buffalo wing.” No. Just no.)

Now I refuse to eat hummus unless it’s homemade or prepared at a hummusiya.

I experimented with different recipes and watched YouTube videos of master chefs and amateurs creating their versions of the chickpea paste.

Some throw in lots of garlic, some skip the olive oil. Some swear by ice water for the right texture. Others add onion and garlic to the chickpea cooking water.

I discovered the secret to truly creamy hummus – whether using homecooked or canned chickpeas – is to rub the beans in a bowl of water to remove the husks. You could also strain the hummus afterward but that’s a mess. 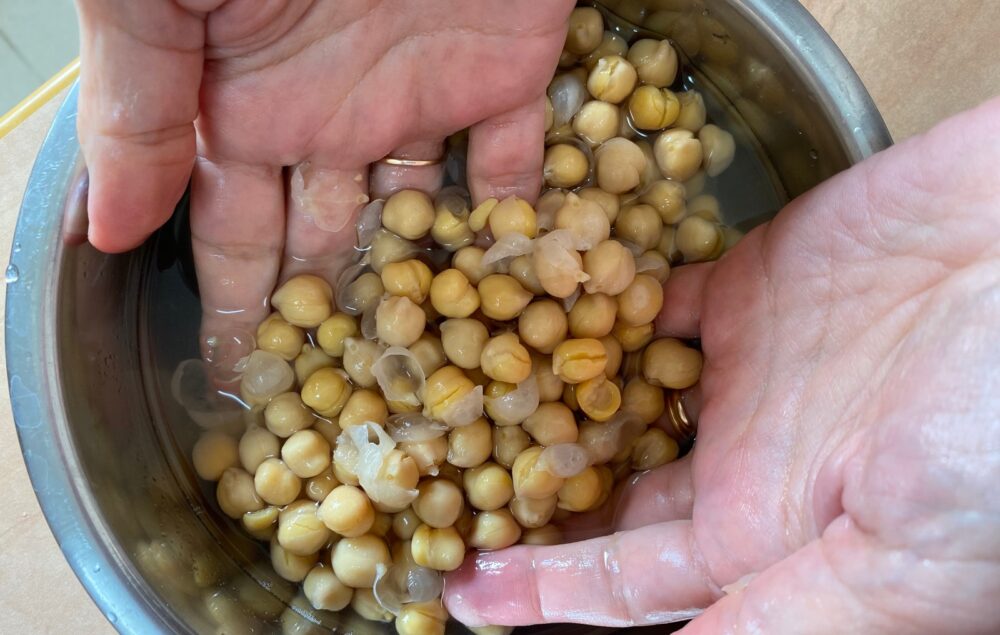 Here I am massaging the husks off the chickpeas. Photo by Steve Leichman

If I’m feeling too lazy to massage garbanzos and wash the food processor, I zip up to our local mall’s branch of Bahadunas, a chain of hummus bars whose name is Arabic for “parsley.” 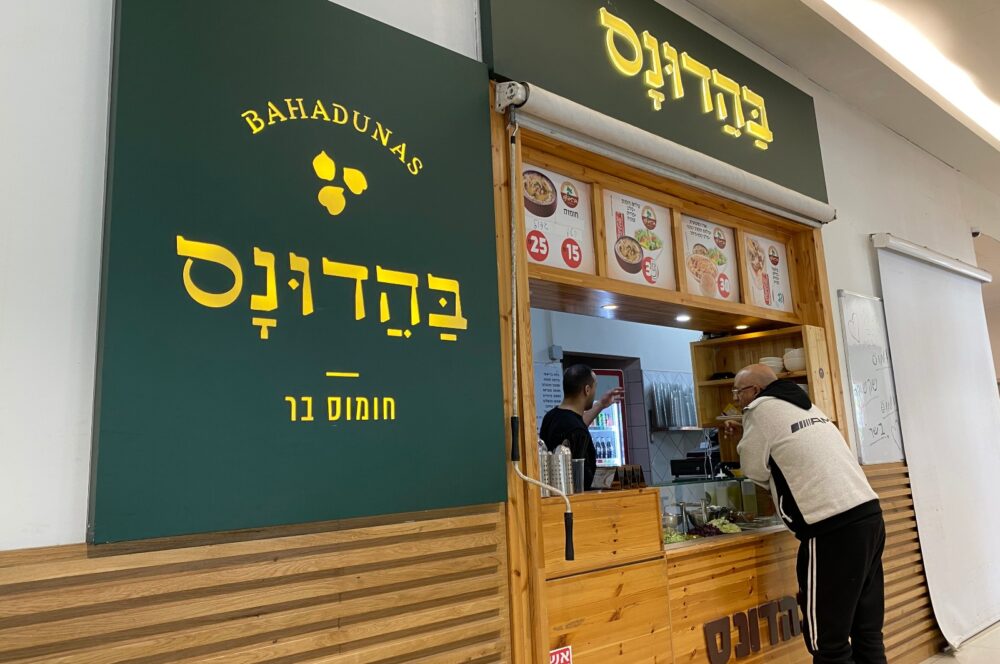 Like its heavenly companion tahini (takhina in proper Hebrew), made-from-scratch hummus has a short fridge shelf life of a couple of days max. But if a batch turns out well, that’s never a problem.

How do Israelis react now when I place hummus on the table? Recently I served some to a pair of painters working in my house.

“Is this homemade?” one of them remarked with his mouth full. “Ta’im,” delicious.

Ready for a bite. Abigail Klein Leichman enjoying authentic hummus at Bahadunas Hummus Bar. Photo by Barbara Casden
UNCOVER ISRAEL - Get the ISRAEL21c
Weekly Edition free by email
Sign Up Now!
Bring Israel's story to life.
Millions of people around the world rely on us to gain a deeper understanding of Israel. We are the trusted source for original content you won't find anywhere else.
You can make a difference. Donate today to support journalism that brings Israel’s story alive.
SUPPORT ISRAEL21c
Read more on:   Tales from the heart, hummus, Culture, Israeli food and drink