A few year ago, photographer Assi Haim was wandering the streets of Tel Aviv, camera in hand, in search of a project topic. It was at the corner of Allenby and Mazeh street that he found cafeteria proprieter Zosha, aged 84 and Nurit “who’s been working with him for 18 years, and isn’t so young herself.” Speaking in a 2011 presentation (video embedded below), Haim says, “I don’t know what drew me in, whether it was the green Formica or Nurit’s sweater glowing in the sunlight. But I went in and the minute I crossed the threshold I felt like I was being sucked back in time 50, 60 years, like in a Hollywood movie. And in that same moment I understood that this is what I was going to do: document these places that had existed for decades and the people who run them, like Zosha who in the past had managed a team of 10 waiters and chefs. In recent years, he comes to work alone, prepares the chopped liver, the meat patties and the Jewish food, and then waits for customers — whose numbers grow less and less as the years go by.

He calls his subjects “rebels” because, as he says, “I felt they were stuck like a bone in the capitalist system’s throat because they refuse to hop from trend to trend, from fashion to fashion. They respect the furnishings they started out with and don’t replace them every time they’re scratched or cracked. And they also refuse to give up on the precious piece of real estate in favor of the young entrepreneurs who try to evict them.” “Miriam Givon, who is over 80 years old, established Kolbo Yehezkel at the north end of Ibn Gabirol Street with her husband in 1955… The old-time customers have died and their children have grown and moved away, but you can still find Miriam behind the same wooden counter. She remembers the thousands of inventory items there by heart, along with their prices.” “In this documentation project, I feel a bit like I’m in a race against time. There are places that are disappearing like the Tessler Restaurant, located at Karkur junction on the old northern highway. Yaakov Tessler inherited the restaurant from his parents who died a few years ago. He runs it and has kept the same decor. But progress moves on, Highway 6 was built and many drivers use that road on their way north — plus the intersection on the old highway doesn’t have an easily accessible exit to this roadside restaurant, and people simply don’t stop. They keep on driving, not knowing about this pearl of a place that has been preserved in time, as it was. The lack of customers has its effect, there’s no income and Yaakov’s brothers in the US are demanding that he realize the value of the property itself. So, barring a miracle, this restaurant will close within the next few months.” “One of the oldest places I photographed was Conditoria Albert [a confectionery] in [Tel Aviv’s] Florentine neighborhood, which was founded in 1935 by Albert who is pictured in the framed photograph above. Albert came — made aliya — from Greece in the early 20s in Tel Aviv and brought with him from home all the secrets for preparing sweets. His son Yaakov took over — he’s not so young either, he’s over 70 — and he didn’t change a thing. The store has stayed the way it was the day it opened… I asked Yaakov why doesn’t he renovate. He said, I’m old; what’s there to change? The thing is, he’s been saying that for 35 years — I think he likes the place the way it is — and I can understand him.” “One thing I thing heard from the Rebels — and I also heard it from Yehudit Weider, who has been manufacturing and selling thermoses for decades on HaAliya Street in Tel Aviv — is that cheap Chinese goods have ruined them but that they, innocent and naive, keep on trying to fight this dragon from the East, even though the end result is pretty clear to them, too.” “Another thing you can identify in these places is the soul of these people. This is Rivka from Holon who comes in to Florentine by bus every morning to open her delicatessen. And what troubles her most is that people walk by, look in, see an old place and don’t come in. They don’t know that she puts her heart and soul into every sandwich, along with her perennial smile.” 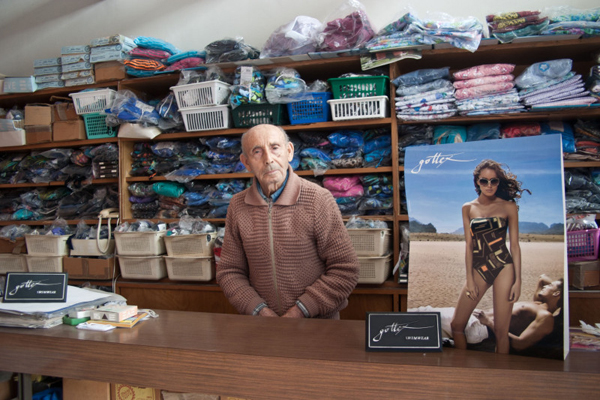 “This is Godel of Salon Adina in Netanya whose clientele has long moved on to the shopping malls. But he’s still there. Every winter he waits for summer so he can sell a few more Gottex bathing suits, [a brand] he considers the most beautiful in the world.” “Many of these Rebels are children who grew up in their parents’ business, like Menashe [a tailor] from the old central bus station area in Tel Aviv. In his day, the buses would let off tens of thousands of passengers a day and work was endless. But ever since the bus station moved, the streets have emptied somewhat. But Menashe wakes with a smile every day and comes to work…  and its a great pleasure to talk to people like this and see people whose goal isn’t to be rich but who simply enjoy what they do.”

“People ask me why I called them ‘Rebels’ and not ‘Survivors’ because after all, these are people who are just getting by. But I identified something within them that was more active, a kind of rebellion against a system that demands fast changes, aggressive marketing, modern decor and interior design. And their opposition, their going against the grain, is in the end something subversive, I think.”

“Their biggest rebellion is actually against old age and every conversation brings up the fact that they want to remain productive… and I think they’re aware — at least the elderly amongst them — that closing shop will mean their own end is near.”

“And I feel that’s my role: to document them and give them the respect through both the photographs and the text I write in the blog.”

More powerful personal stories stories and images from Assi Haim’s “The Rebels” project are available on his blog.