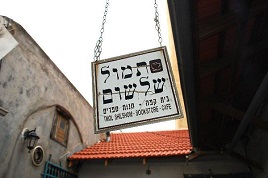 It seems like its been around forever as a venerable Jerusalem institution of old but in fact, Tmol-Shilshom is celebrating 21 years young this month. This is no minor accomplishment for a bookstore-cafe-restaurant in any city but over the years, founders Dan Goldberg and David Ehrlich have faced business-killing challenges peculiar to downtown Jerusalem in terms of security (the second Intifada) and commerce (construction of the light rail).

Thankfully, Tmol-Shilshom has survived and flourished as a center for poetry and literature (not to mention a highly-rated Friday morning brunch). 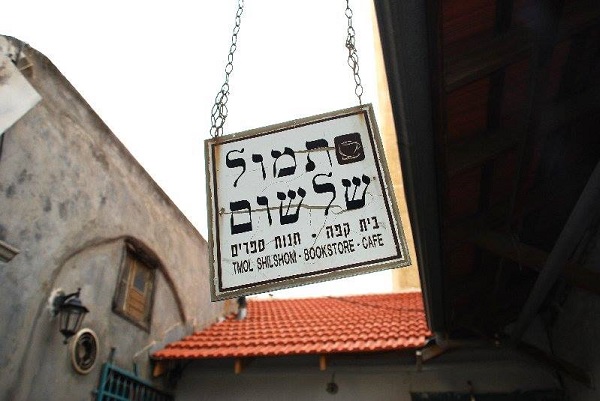 Originally opened in June, 1994 in a 130 year-old building in the historic Nahalat Shiva neighborhood, Tmol-Shilshom tied itself firmly to the world of Israeli nostalgia by naming itself after a novel by S.Y. Agnon whose title is translated as “Those Were the Days.”

The sentiment is reinforced by the decor, an eclectic mix of antique furniture (real and faux), menus fashioned from old books, and the tableware: old fashioned glass and metal tea cups, and china plates patterned with poetry and prose.

The place was quickly adopted by Jerusalem’s literary lights, chiefly the late Yehuda Amichai, who read from his poetry at the 1994 opening; he was soon followed by other well-known Israeli authors such as Amos Oz, A.B. Yehoshua, David Grossman, Batya Gur and many others.

In 1996, Tmol-Shilshom expanded to two separate seating areas: one often accommodates events — literary and otherwise — while the other serves regular customers.

Every year, Tmol Shilshom has honored the anniversary of its founding with a colorful birthday party. This year, it will hold an Alice in Wonderland-themed tea party on June 30th, featuring a special menu, a short play (in Hebrew), lectures, readings and more.

As it moves into its third decade, founders Goldberg and Ehrlich also have plans that include a fresh, new menu, a possible street level expansion, and hosting additional art and culture activities, as well as offering Tmol Shilshom as the perfect venue for lectures, conferences, workshops, and family events. To that end, they’ve put out a call for fresh energy and investment in these projects; interested parties can contact them via Facebook or email at tmolshilshomcafe@gmail.com.

Tmol-Shilshom is located at 6 Yoel Solomon St., Jerusalem. Open from 9 a.m. till 1 am (closed Saturdays). For more information, visit the Tmol-Shilshom website.

UNCOVER ISRAEL - Get the ISRAEL21c
Weekly Edition free by email
Sign Up Now!
Bring Israel's story to life.
Millions of people around the world rely on us to gain a deeper understanding of Israel. We are the trusted source for original content you won't find anywhere else.
You can make a difference. Donate today to support journalism that brings Israel’s story alive.
SUPPORT ISRAEL21c
Read more on:   Nostalgia Israel, Tmol Shilshom, Jerusalem, Israeli food and drink