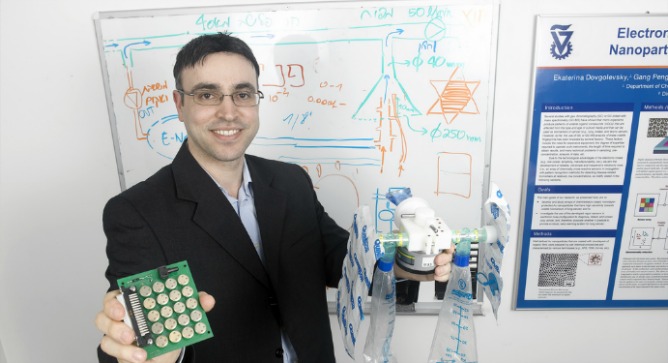 An Israeli invention that can detect lung cancer from exhaled breath will be commercialized in a joint venture between the Technion-Israel Institute of Technology and Alpha Szenszor, a Boston-based manufacturer of carbon nanotube sensing equipment.

As ISRAEL21c reported in 2011, Technion Prof. Hossam Haick has been working on what he calls “Na-Nose” (the “na” is for “nanotechnology”) since 2007, and the device has been proven in numerous international clinical trials to differentiate between different types and classifications of cancer with up to 95 percent accuracy.

Patients breathe into a tube; the Na-Nose analyzes the more than 1,000 different gases that are contained in the breath to identify those that may indicate that something’s wrong. It works by binding gases to specific nano-materials, a technique formally known as volatile organic compound (VOC) detection.

The breakthrough is significant because there is currently no commercially available way of screening for lung cancer. Expensive and cumbersome imaging technologies (such as CT scans) are ordered only when a patient complains of symptoms, when it’s usually too late, or for a smaller group of high-risk individuals, mostly long-term smokers. And biopsies of tumors, when required, are inherently invasive.

Na-Nose could potentially change the current reality, where receiving a diagnosis of lung cancer is all too often a death sentence. Eighty-five percent of those with this particularly pernicious form of cancer don’t survive more than five years.

A few years down the road

Up until now, Haick’s innovation could only be used in a laboratory setting, says Steve Lerner, CEO of Alpha Szenszor. The new partnership will aggressively push to produce a manufacturable commercial “appliance” within two to three years. FDA testing could take up to another five years.

But before the decade is over, Haick and Lerner are confident that your local family physician should have a pocketsize “Na-Nose,” costing as little as $10, in his or her office. The initial device will be a lot more expensive, perhaps as high as $10,000 per unit, which will limit it to larger clinics and hospitals. But that’s still much less expensive than a CT imaging machine, and smaller.

The vision is even bigger. Lerner anticipates a day when the nanotechnology underlying the Na-Nose will be built into smartphones and tablets – allowing you to connect a tube to your iPad and screen yourself for cancer at home. Haick envisions an even lower-cost model of Na-Nose put to work in the developing world.

While the initial focus for the joint venture is on lung cancer, the possible benefits go much further. Haick says that, in the five years since he’s been working on the technology, his team has expanded the range of diseases it can detect. Multiple sclerosis, Parkinson’s disease and other types of cancer — including breast, prostate and gastric — are all being found with similar levels of accuracy.

Alpha Szenszor is probably the ideal partner to bring the Na-Nose to market. Lerner has spent his career building and managing scalable manufacturing operations, from consumer electronics to semiconductors. Meanwhile, Alpha Szenszor had been perfecting its carbon nanotube sensor equipment but hadn’t yet found the right commercial application. Haick needs those nanotubes to move to the next level.

“The Technion has gone through all the engineering work, significantly accelerating our path. They’ve also made inroads with the medical community,” Lerner tells ISRAEL21c.

If Lerner represents the manufacturing brawn, Haick is clearly the scientific brains. A faculty member in the Russell Berrie Nanotechnology Unit and a professor in the Technion’s Department of Chemical Engineering, he was inspired to apply his chemistry background to disease detection after he read that dogs could sniff out certain types of cancer.

“But they had no way to communicate that efficiently,” he said, “and it’s not possible to bring dogs into a hospital setting due to issues with hygiene.” The Na-Nose explicitly seeks to duplicate the dog experience with technology.

Na-Nose’s detection device can be used at three different stages. The first, and most critical, is advanced screening. The earlier cancer is detected, the better the survival rate. The second stage is detailed diagnosis and monitoring during the cancer treatment: a simple breath analysis could mean less radiation or fewer biopsies. And finally, the Na-Nose can be used following successful treatment, to stay on top of any signs that the cancer may be recurring.

Haick, 37, is something of an Israeli scientific superstar. Born and raised in the Christian Arab city of Nazareth, he appeared on Yedioth Ahronoth’s list of 50 leading Israelis in 2007; on the Massachusetts Institute of Technology Review list of 35 leading young scientists for 2008; and in 2010, he was named one of the 10 Most Promising Young Israeli Scientists by Calcalist, and one of the Jerusalem Post’s Young Israelis of the Year.

With time the Na-Nose will get smarter and new medical treatments will follow. For example, Haick is working on the ability to connect lung cancer detection with genetic mutations. “This is quite important,” he said, “as many people with similar lung cancers, in the same environment, who get the same treatment don’t respond equally. We attribute this to genetic mutations.”

The promising future of personally tailored treatment cocktails requires this level of differentiation.

There’s still much to be done to make the new joint venture a reality. But given the potential, Haick and Lerner may just hit this one on the nose.

UNCOVER ISRAEL - Get the ISRAEL21c
Weekly Edition free by email
Sign Up Now!
Bring Israel's story to life.
Millions of people around the world rely on us to gain a deeper understanding of Israel. We are the trusted source for original content you won't find anywhere else.
You can make a difference. Donate today to support journalism that brings Israel’s story alive.
SUPPORT ISRAEL21c
Read more on:   Alpha Szenszor, Na-Nose, Hossam Haick, lung cancer, Research, Health, Cancer Diagnosis