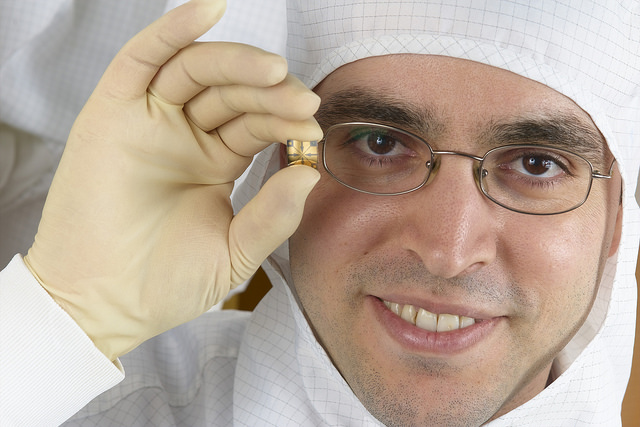 Prof. Hossam Haick of the Technion

Prof. Hossam Haick of the Technion

A potentially quick, simple, inexpensive and non-invasive method for identifying people at risk of stomach (gastric) cancer and finding tumors at an earlier stage has been announced by Prof. Hossam Haick at the Technion-Israel Institute of Technology.

Haick, a professor of chemical engineering at the Technion’s Russell Berrie Nanotechnology Institute, developed the nanotech breath-analysis system Na-Nose to detect a range of illnesses. The latest study proved its effectiveness in predicting and diagnosing gastric cancer.

Writing in the prestigious journal Gut, Haick and his lab team describe how they took 968 breath samples from 484 patients, including 99 known to have gastric cancer.

They analyzed each sample twice – once using a standard gas chromatography-mass spectrometry method (GCMS) and again with Haick’s nanoarray technology combined with a pattern-recognition algorithm — for Helicobacter pylori, a bacterium known to increase the risk for stomach cancer.

The tests showed that patients with cancer as well as those at high risk had distinctive “breath prints.”

The nanoarray analysis allowed the researchers to distinguish between patients with gastric cancer, people with precancerous stomach lesions, and healthy individuals, based on the concentrations of eight specific substances (out of 130) in the oral cavity. The method had 73 percent sensitivity, 98% specificity and 92% accuracy.

The diagnosis is accurate regardless of other factors such as age, sex, smoking habits, alcohol consumption and the use of anti-oxidant drugs.

This innovative stomach cancer-detection technology has significant advantages over the existing detection methods that are more invasive and less capable of finding tumors in the earliest stages, according to Gut.

Gastric cancer, one of the most deadly forms of cancer, is ordinarily diagnosed via endoscopy, which requires inserting a tube into the esophagus. Patient must fast and receive an intravenous sedative before the procedure.

Though the disease develops in a series of well-defined steps, there is currently no effective, reliable and non-invasive screening test for catching these changes early on, when treatment can be most effective.

The study, published in Gut as part of the doctoral thesis of Haick’s student Haitham Amal, was conducted in conjunction with a Latvian research group headed by Prof. Marcis Leja, based on the largest population sample ever in a trial of this type.

In order to assess the accuracy and effectiveness of the breath-analysis nanotechnology for stomach cancer diagnosis, a wide-scale clinical trial is currently under way in Europe involving thousands of participants who have cancerous or pre-cancerous tumors.

“Nanoarray analysis could provide the missing non-invasive screening tool for [gastric cancer] and related precancerous lesions as well as for surveillance of the latter,” the study report concludes.

Haick also is working on related advances such as the Sniff-Phone mobile diagnostic tool and a portable pneumonia diagnostic kit.

According to the Centers for Disease Control, about two-thirds of the world population is affected by the H. pylori bacteria, which cause peptic ulcers and gastric inflammation in addition to its association with stomach cancer. Until BreathID was introduced to the market in 2013, the most common way to detect this type of bacteria was a blood test.

UNCOVER ISRAEL - Get the ISRAEL21c
Weekly Edition free by email
Sign Up Now!
Bring Israel's story to life.
Millions of people around the world rely on us to gain a deeper understanding of Israel. We are the trusted source for original content you won't find anywhere else.
You can make a difference. Donate today to support journalism that brings Israel’s story alive.
SUPPORT ISRAEL21c
Read more on:   gastric cancer, stomach cancer, Na-Nose, Hossam Haick, breath analysis, Health, Technion-Israel Institute of Technology