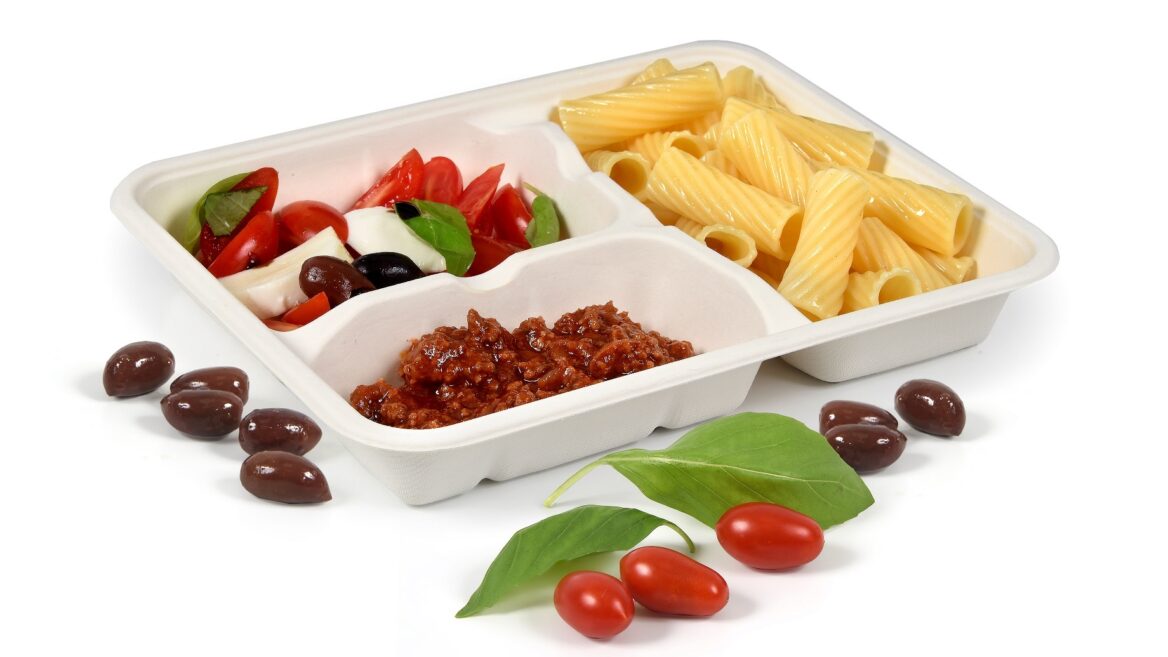 A food tray made of compostable plant fiber. Photo courtesy of W-Cycle

When you buy a ready-to-eat meal from the supermarket, it’s most likely packaged in plastic. Your airplane meal is in plastic-wrapped in aluminum foil.

Here’s a more Earth-positive approach: packaging from the fiber waste generated by refining wood for paper or refining plants such as sugarcane, banana and rice. Fiber is highly absorbent, transferring liquid from the roots to the rest of the plant.

The best part? These “molded fiber” containers can simply be discarded in the compost bin. Nontoxic and metal free, they break down naturally just like leftover salad greens.

Dozens of companies already manufacture everything from carryout containers to flowerpots and packaging for electronic items from molded fiber, according to the International Molded Fiber Association. 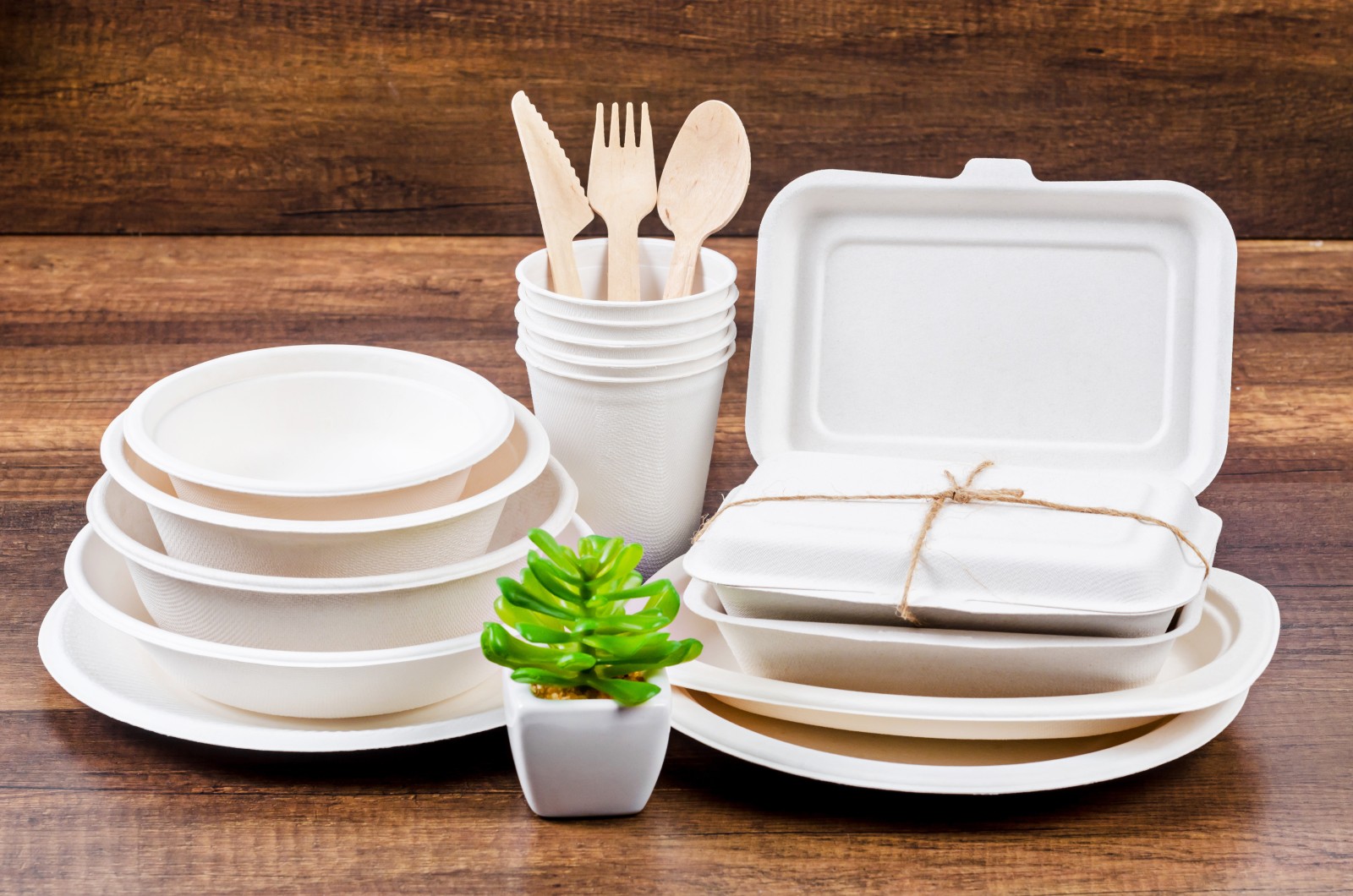 Tableware made from plant fibers. Image via Shutterstock.com

The problem is that they’re leaky. Anyone who has ever brought home a molded fiber carton containing a cracked egg knows this.

Manufacturers generally compensate by adding a waterproof spray to the outside of the package or by dipping it in wax.

The company, located at Kibbutz Gan Shmuel just north of the coastal city of Hadera, has developed a polymer-based additive which, when inserted into the manufacturing process for making compostable fiber packaging, renders the container impervious to liquid or oil leaks.

The company’s flagship product, SupraPulp, currently works with sugarcane waste, although the same formula will work with other types of fiber waste.

Sugarcane fiber, called bagasse, is the dry, pulpy fibrous matter that remains after sugarcane is crushed to extract its juice.

W-Cycle’s aim, CEO Lior Itai tells ISRAEL21c, is to “engage with sugar manufacturers to work with the many tons of sugarcane waste that are generated today and to set up factories with them so that, instead of burning their sugarcane waste, as they do now, they can extract the fiber from this waste and produce containers.”

Fresh meat, poultry and seafood are also commonly packed in plastic due to their juice runoff and are candidates for a SupraPulp alternative.

SupraPulp-produced packaging will cost the same as plastic, Itai says. That means the main advantage for manufacturers is going green, which consumers and governments are increasingly demanding.

SupraPulp is entering the market at a time when plastic waste is reaching epidemic levels. 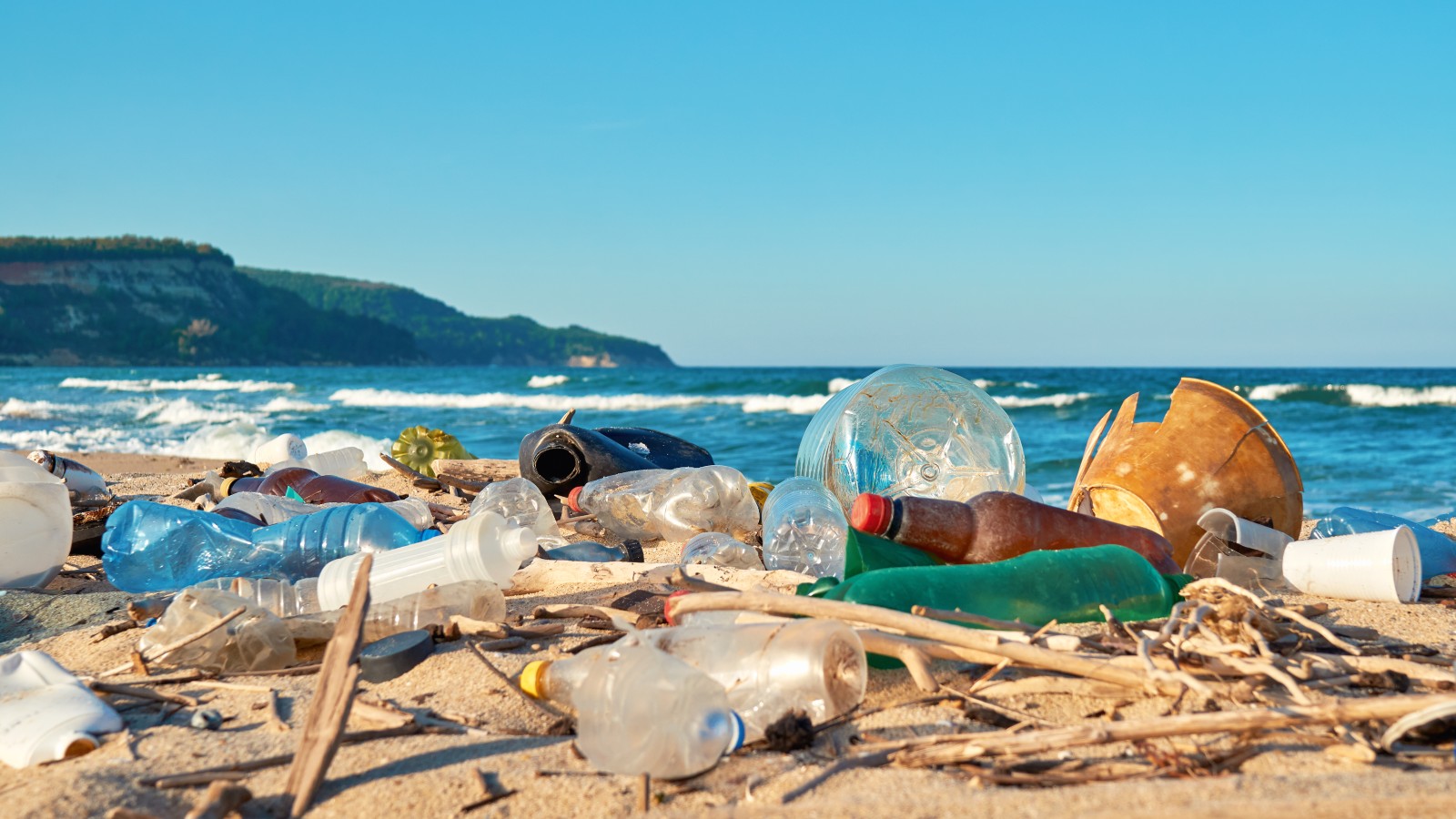 Plastic waste on a beach. Image via Shutterstock.com

The 10-person W-Cycle doesn’t have McDonald’s but it does have one publicly revealed partnership with top-five Israeli food group Neto. 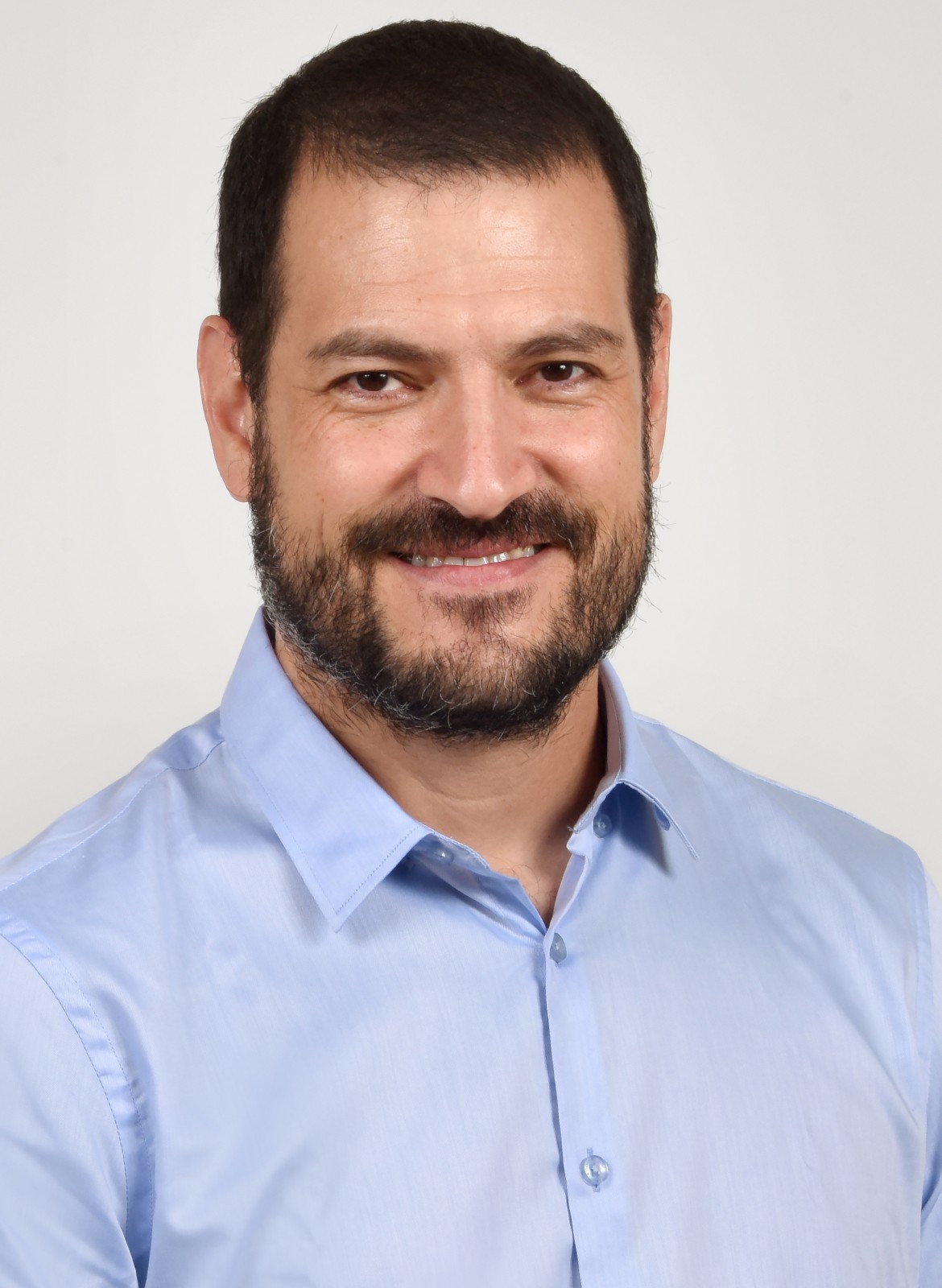 Itai says that W-Cycle is in discussions with ready-meal manufacturers, an international airline catering company, and a business in North America that distributes tens of thousands of school lunches a day from a centralized kitchen.

W-Cycle is pursuing a business-to-business model for SupraPulp, seeking out partnerships with distributors and manufacturers. The company’s main customer targets so far are the catering and food-delivery packaging industry.

Covid-19 has impacted this plan. On the one hand, airlines have significantly downsized their operations. On the other hand, the use of takeaway containers is on the rise as in-restaurant dining has taken a hit.

Still, the airline sector could prove major. W-Cycle was approached by an airline that said one of its international hubs passed a new regulation saying it would only accept compostable materials as trash; for everything else, the airline would have to pay. 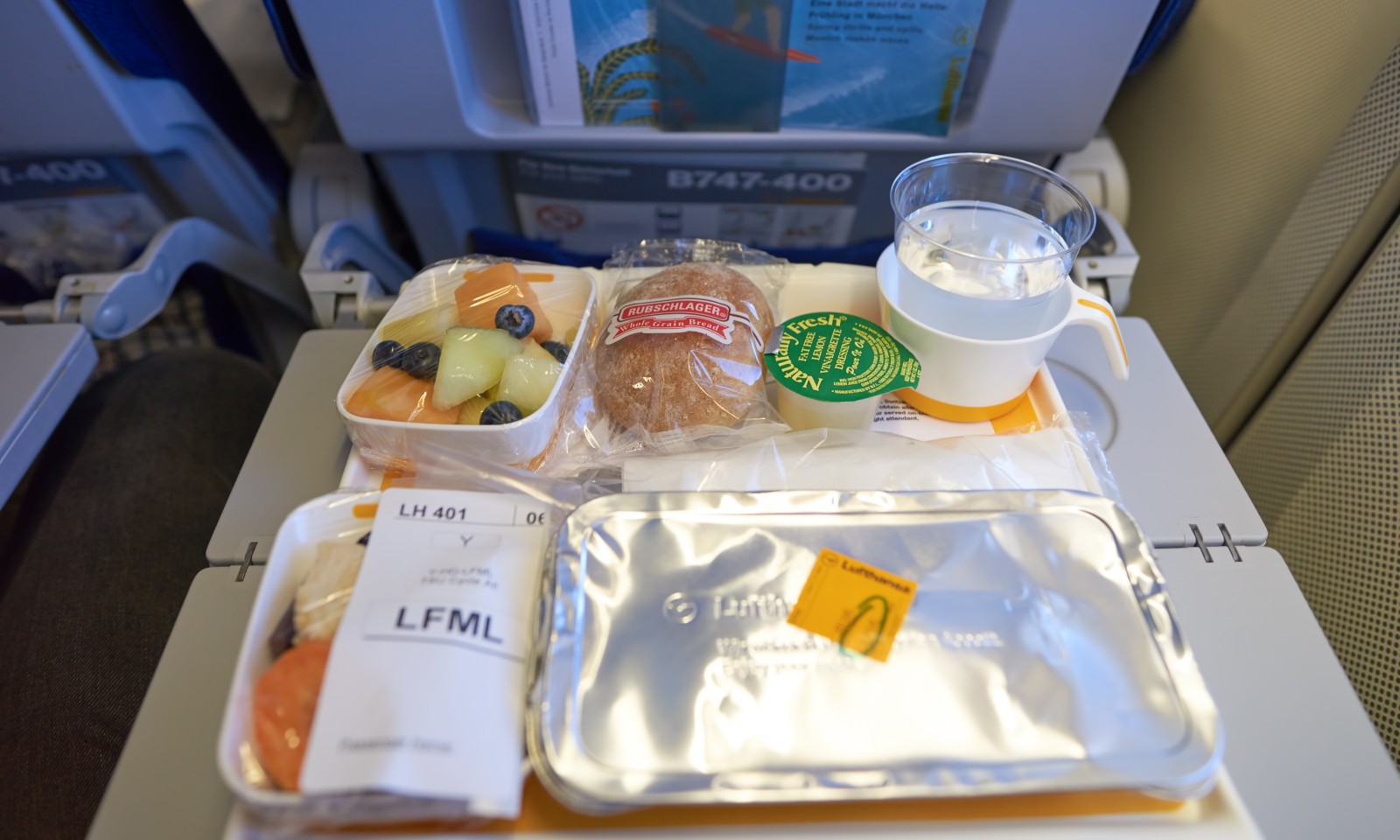 Airplane meals come with lots of plastic and aluminum waste. Image via Shutterstock.com

In other cases, change is coming from the companies themselves.

Unilever, whose many brands include Ben & Jerry’s, Lipton and Dove, announced last year that it was committed to cutting in half its use of “virgin plastic” by 2025 and, as a result, accelerating the use of recycled materials.

More products in the pipeline

Itai’s partner at W-Cycle is Joseph Siani, who has been working in the packaging industry for two decades.

“Pulp is one of the greatest raw materials in all industries,” Siani told the business journal Globes. “Pulp can replace anything.”

Itai came to W-Cycle from Israeli startup SiSense; before that he was at Israel-based global tech powerhouse NICE.

SupraPulp is W-Cycle’s first product but more are in the pipeline. One of these is “high-barrier films” that prevent moisture, oxygen and light from entering and exiting food packaging, thus extending shelf life.

We asked Itai if there will be a learning curve for consumers to start composting their Cup O’ Soup packaging.

“Yes, I’m guessing so,” he tells ISRAEL21c. “But humanity has the tendency to adjust to these kinds of changes. If you go back 40 years and told someone they will need to separate their waste, they wouldn’t be as receptive to the idea as they are today.”

For more information on where compostable molded fiber could fit into your lifestyle, click here.

Other Israeli companies that can turn polluting materials into eco-friendly ones:

Clariter has developed a technology to transform plastic waste into industrial products such as solvents, oils and waxes.

SG Tech treats livestock waste so that it can’t pollute water aquifers or cause salinization of fields.

UBQ turns household trash into plastic substitutes. UBQ’s materials are now being used at some branches of McDonald’s in Uruguay; turned into recycling bins by the Central Virginia Waste Management Authority; and made into Mainetti brand garment hangers for the retail fashion industry. 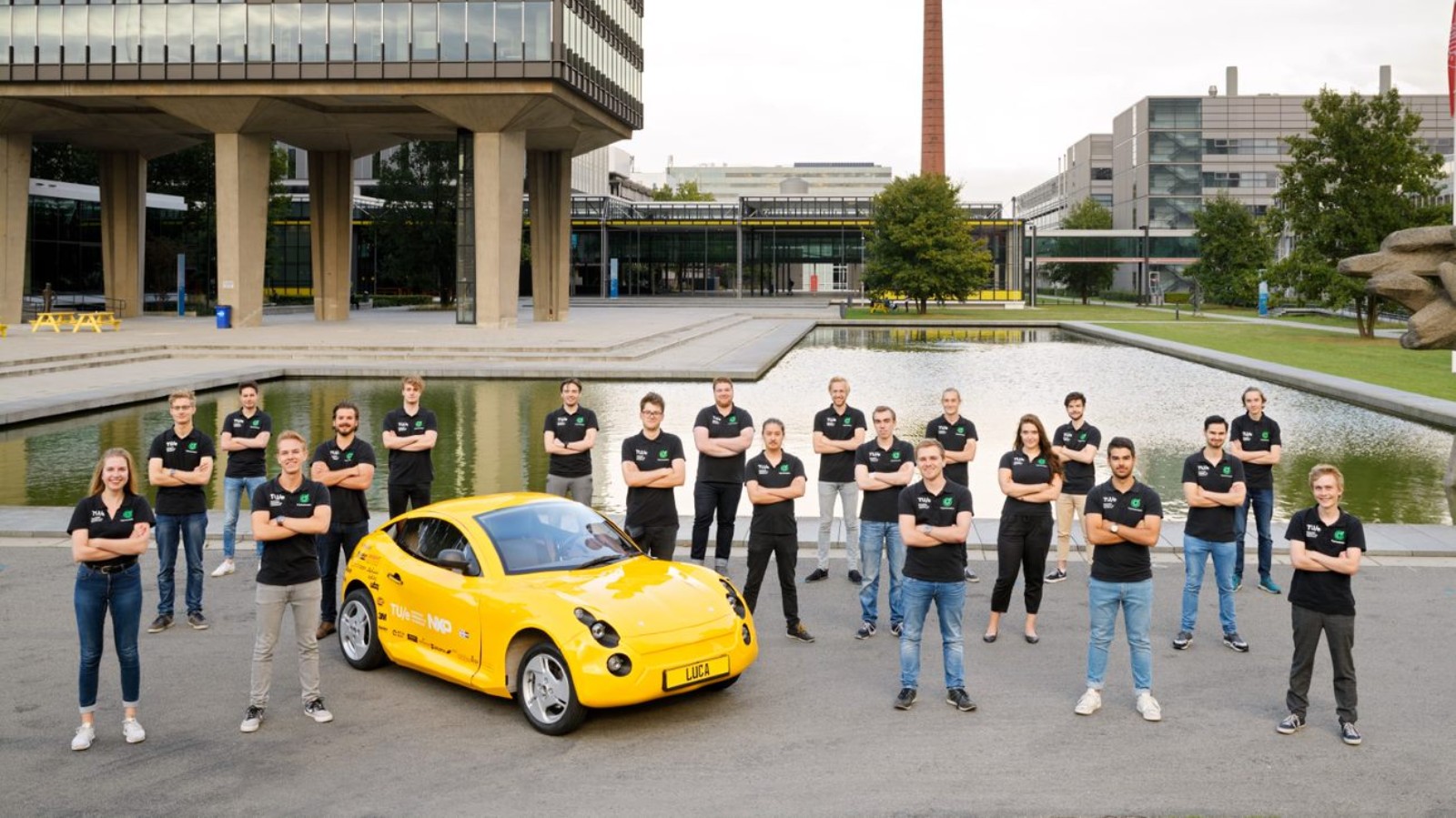 A car made in the Netherlands from UBQ biomaterials. Photo by Bart van Overbeeke/Fotografie

Recently, a team of students from the Eindhoven University of Technology in the Netherlands reported that it had designed the first zero-waste car made out of bio-based material developed by UBQ.