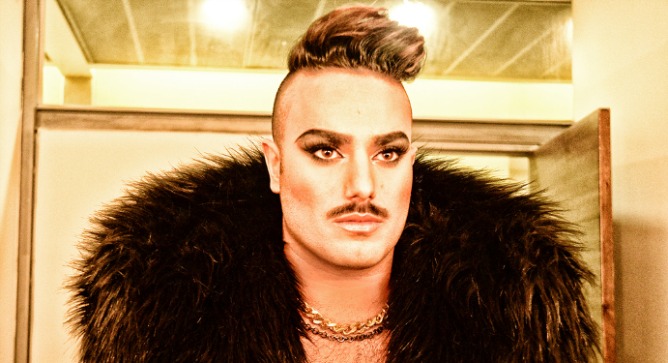 Luckily for him, Uriel Yekutiel has small feet for a man. In Israel, women with feet beyond size 41 are hard-pressed to find suitably fitting shoes. But Yekutiel says he’s never had a problem finding the right size high heels.

Yekutiel is globally celebrated for his cross-dressing, eyelash-batting, eccentric caricature of himself. You’ve seen him in music videos on MTV, on major nightclub stages in Europe, Canada and South America, on an Israeli television sitcom and at gay pride parades across the globe.

He has also featured in the hugely successful YouTube series of stylish videos for Arisa, the top Tel Aviv gay party producers.

Donning his signature mustache and the latest in women’s fashion, Yekutiel dances, choreographs, lip synchs, sings and commands the stage.

“I want to entertain people. That’s the core of what I do. I want people to have fun,” Yekutiel tells ISRAEL21c. “I don’t like being talked about as gay. I’m a person. I have a full life. It happens to be that I’m gay. I like to do good entertainment that has nothing to do with my sexual preferences. It’s not all about nudity and sex and drugs. It’s about good music and funny videos. I also happen to be a gay guy in makeup and that’s fine.”

Yekutiel, 25, is one of the faces of Israel’s fabulous nightlife scene.

“I’m proud to be a face of Israel, if that really is the case,” he says. “I love the gay community and that is part of who I am. But it makes me feel very proud to be accepted into the mainstream as well and see families and kids come up to me.”

Pop heartthrob Justin Bieber was skyrocketed to fame after a talent manager saw his YouTube videos. Though not yet on the Bieber scale of fame, Yekutiel also got his start in social media.

At the age of 16, Yekutiel posted some videos of himself lip-synching, dancing and performing for the camera. “It was an opportunity for me to do whatever I wanted. There are no filters on YouTube,” says Yekutiel, who claims Afghani and Yemenite DNA. “I love the opportunity the Web brings that it’s not just television executives deciding what’s cool and what’s not.”

Arisa owners Omer Tobi and Yotam Papo saw his homemade videos and invited him to star in their outlandish promotional music video invitations that went viral across the globe. Yekutiel played a Bollywood dancer, an Arab woman in labor, a soccer player with red pumps, and a Breslov Hassid, among other characters. 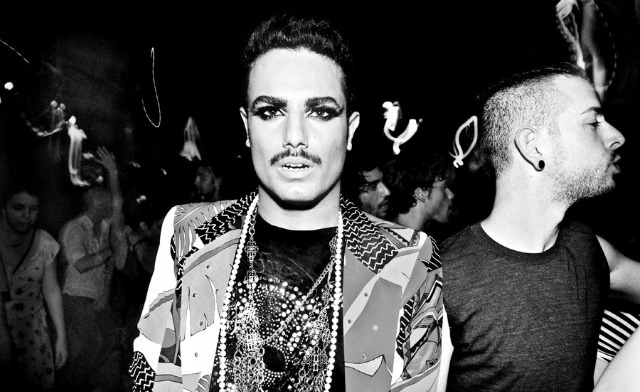 The face of Tel Aviv nightlife. Photo by Goni Riskin

From his Arisa videos he moved over to perform with The Young Professionals (TYP), the Polydor-signed Israeli electro-pop outfit that went on to top dance charts across Europe.

Yekutiel was credited for making TYP’s videos for “D.I.S.C.O” and “20 Seconds” such big hits. His hilarious choreography, campy dancing and distinctive fashion hypnotized viewers. Which makes it all the more impressive that Yekutiel is self-taught.

“I have no training in choreography. I went to drama classes in grade school and I danced ballet for about four months when I was 13,” he says. “I learned how to dance from watching MTV videos as a kid.”

In fact, Yekutiel is now collaborating with TYP on his own music, hoping to release an original CD in the near future.

Yekutiel’s fashion sense is also one of his standout features. He regularly dons high heels with designer dresses. But he won’t show cleavage.

“If you get too sexy all that people see is the sexiness and they don’t see what you’re doing. I like old-school entertainment, 1950s musicals. I don’t like to be half naked. It’s not classy,” he says.

“Yekutiel is the synthesis of practically every gay archetype of the past 50 years with a few Israeli twists thrown in for good measure. Gender roles haven’t been this playful since Dietrich put on tails,” writes the New York guide TheShowt. “What can we say … we love Uriel Yekutiel! It takes balls to pull off heels and facial hair!” 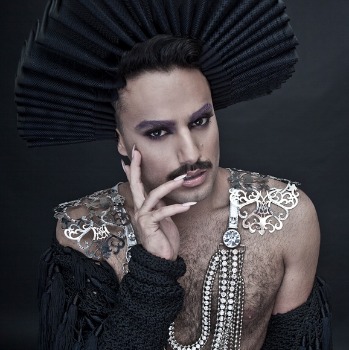 Nudity is not his thing.

“I’m not a drag queen,” he says. “It’s such an amazing art doing female impersonation. But it’s not what I do. It’s not fair to them to call me that.”

Yekutiel says he’s an entertainer with a great fashion sense.

“A lot of my art is external. It’s based on what you see. The clothing and makeup and hair — it’s just a part of making a mood, making a character,” he says. “I love beautiful things. I love the meaning fashion has. Everything tells a story for me and I love telling a story.”

The youngest of four siblings, Yekutiel was raised in Herzliya – just north of Tel Aviv – by his father and a nanny. “She was much more than a nanny,” he says. “She was with us for 17 years.” His mother passed away when he was two years old.

Before taking the stage, Yekutiel worked in a local restaurant. “It was my favorite job and I miss it,” he says. “The second thing I love most [after entertaining] is restaurants and cooking and food. I’d like to own a restaurant one day.”

A love for food and dancing may not seem like perfect bedfellows but Yekutiel’s other hobby is an even stranger pastime.

Though you may not expect it by looking at him, Yekutiel assures ISRAEL21c that he’s a very good marksman. His father, Joseph, was the former chief superintendent of marksmanship with the Israel Police. He also co-wrote numerous books on small-arms fighting techniques.

Today, Joseph Yekutiel is one of his youngest son’s biggest fans. “He comes to my shows,” says the younger Yekutiel. “My dad just wants me to be successful.”

Yekutiel says his siblings – his “genius sister” who has a PhD in chemistry and his brothers, one a traveler and the other working for a gaming company – are all supportive of what he’s doing.

ISRAEL21c caught up with Yekutiel between stints in Europe. He says he spends 50 percent of his time abroad – either performing with TYP or doing solo parties.

His fan base is multiplying all the time. Yekutiel says most of his fans are in France – that’s where TYP is most popular — the Ukraine, Russia and Brazil.

“I’m not supposed to go out in drag in Russia, which I do everywhere else,” he says. “The people themselves are very sexual and liberated. But it’s not as free as in Tel Aviv.”

No matter where he goes, people know he’s from Israel and always gush about Tel Aviv.

“People know Tel Aviv is a great place, it has a great reputation. It’s the place to be,” he says. “It’s very safe and very free for everybody.”

And for someone who regularly walks out of his home in high heels, living in an open-minded city is definitely a plus.