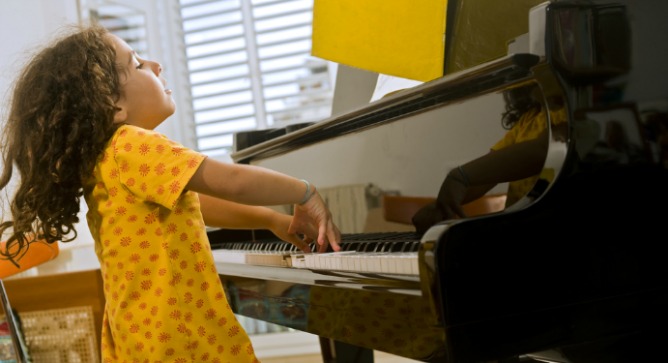 Learning to play piano? An Israeli app will turn the pages for you. Image via Shutterstock.com

When Yair Lavi was a child, he dreamed of a way to automatically transcribe the music he was composing for the piano onto sheet music. Thirty years later, that technology remains elusive, but his new startup, Tonara, does something equally impressive: Its interactive iPad app tracks a musician’s playing in real time and flips the digital “pages” automatically.

Migrating sheet music from paper to tablet computers is nothing new – there are at least 20 other apps that do the same thing. But the others mostly require the performer to use a foot pedal to signal the device when to turn the page, Lavi, Tonara’s CEO, tells ISRAEL21c. “We’re the only app to actually interact with the performers by listening to what they’re playing.”

Tonara is smart enough to follow you even if you speed up or slow down, make mistakes, or play in a room full of other musicians. Tonara’s engineers are working on being able to track such musical intricacies as going out of key or “breaking” a chord. For now, piano is among the best instruments to use with Tonara.

While the app currently doesn’t give immediate feedback, everything the student does is recorded, so it’s easy to review a practice session and check how the audio matched the sheet music since the two are kept in sync during playback.

Tonara has a “scribbles” layover so that a teacher can mark on the digital sheet music where the student needs to make improvements. That same functionality can be used to make notes for use during a performance. In the future, Lavi says, the Tonara app will “redline” where the student strayed and log it all for the teacher to review between sessions.

On the pop music map

Tonara launched in 2011 with several classical music compositions, all available in the public domain. But now it’s also on the pop-music map thanks to a deal with Hal Leonard, the industry’s leading sheet music publisher with 200,000 titles in its collection – from The Beatles to Beyonce – covering some 80 percent of what you hear on radio and MTV today.

About half of those titles will work well with the app, according to Lavi. Tonara has 2,000 of them in its music store today and is digitizing fast.

Lavi says that when he approached the publisher, he found to his delight that the company’s president was already an enthusiastic Tonara user. 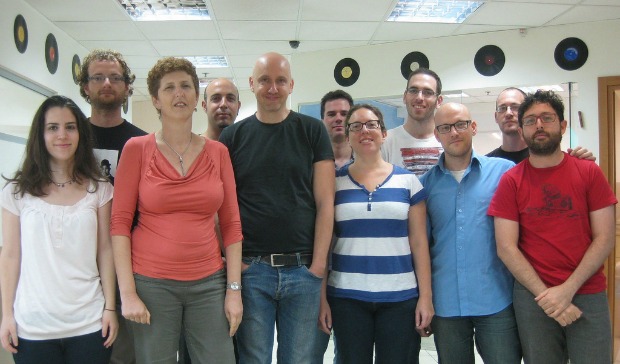 The folks who bring you Tonara. Founder Yair Lavi is in the middle with black T-shirt.

Tonara’s business model is straightforward: You pay to download the sheet music — 99 cents to $2.99, depending on its length and complexity. Collections of several compositions can run up to $14. Tonara splits the revenue with Hal Leonard when applicable. Users receive six free pieces when they download the app.

Lavi revealed that the Tonara app has been downloaded more than 155,000 times. The product was named “app of the week” in Apple App Stores around the world including Canada, Germany, Switzerland and China.

“We had to write some sophisticated tools to make as much of the process as automatic as possible, and there’s still manual work that needs to be done,” Lavi explains.

For example, pop songs usually have a repeating chorus, but not all pre-Tonara sheet music is written in the same way – sometimes the chorus will be written out in its entirety; other times there will be a pointer to an earlier spot on the sheet.

Tonara has a full-time staff of 12 plus 15 part-time music students (who do much of the conversion work), many of whom came via Tonara’s Chief Music Consultant Ron Regev, who has a doctorate from Juilliard and is on staff at the Jerusalem Academy of Music and Dance. Most of the programmers are also musicians. With the new $4 million investment, marketing will receive the biggest boost.

Tonara is iPad-specific right now; no Android version yet. Lavi says that the app will run on the new iPad Mini, but anything smaller would be too hard to use while playing.

Is he worried about competition catching up? In the four years that the app has been in development, Lavi says he received calls from five companies that wanted to license Tonara’s technology, including two that he says were founded at the same time with the same idea but didn’t succeed in implementation.

And even if another company does catch up, it’s a big market. Sheet music is a $1.5 billion market, Lavi says. “And if you look at the market for all of the other things we want to get into, like music education, it’s tens of billions a year.”