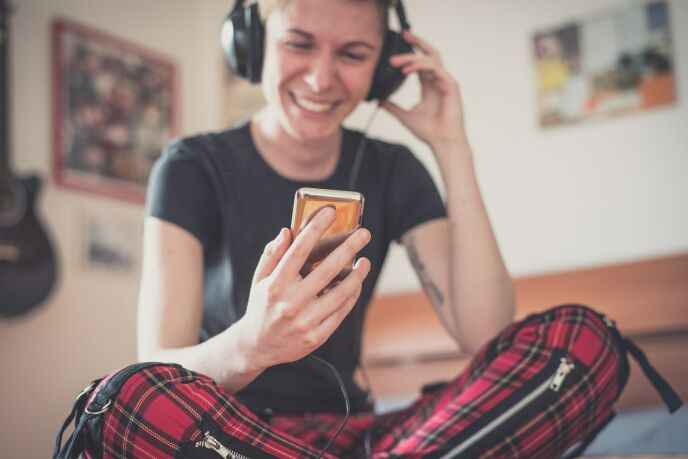 In our ongoing series of “top 10” apps from Israeli developers, ISRAEL21c tunes in this time to applications that enhance your music experience.

Some are meant to help music students get the most out of their lessons, others to amp up the karaoke experience, empower budding DJs or simplify music sharing among friends. What they have in common is their blue-and-white origin.

1. Serendip Media is a social music discovery app for iPhone and iPod Touch, connecting users with others who have similar musical taste, and automatically building a playlist of the music they are sharing. 2. Tonara tracks playing in real time and flips digital score “pages” automatically. The score synchronization feature allows musicians to review their practice sessions and, in the future, will power stage-management functions such as automatic lighting or supertitle changes at concert venues and opera houses. Carmel Ventures injected $4 million into the company, calling it a “disruptive technology … designed to transform the music learning and practicing experience.”

3. Yokee  from Famous Blue Media lets you sing along and record your favorite songs from YouTube music videos, and share your karaoke creations with others. It offers special effects like echo and reverb. Available for iOS and Android devices.

4. EQuala  social radio app lets you listen to friends’ music instantly, by following them and adding their choices to the personalized playlist. A “music DNA” created for each user helps you identify others with similar musical taste. The app’s new-artist promotion platform, Feature.fm, stemmed from EQuala’s need to monetize. Featured songs replace audio ads, minimizing disturbance in the listening experience and providing artists with a new level of exposure.

5. Piano Dust Buster 2.0, from award-winning interactive video game developer JoyTunes, is an interactive iPad game to teach beginning piano. The player helps a virtual granny dust her piano, in the process learning the musical notes and rhythm of the instrument. A 3D virtual keyboard activates the app for those players without a real one handy. There’s a special mode for practicing sheet music, and players collect points for a job well done. Piano Mania  is JoyTunes’ answer for more advanced players.

7. Fusic allows fans to step into their idols’ shoes by recording their own cover versions of their favorite songs — which are then spliced into the corresponding music video in minutes. Once done, the Fusic video can be shared through social media channels. The app is gaining traction, with stars like Mariah Carey putting their stamp of approval on it. Fusic is available on iPhone, iPad and iPod formats; an Android version is expected in late 2014.

8. DJ Mix Box from instruMagic lets iPhone users “play with music” by providing live sets of loops and sounds. You can loop in and out of the mix, blend in sound clips and tweak DJ effects by tilting the device.

9. Songful, also from instruMagic, turns an iPad into a virtual guitar. Users choose any chord page from Ultimate Guitar’s 200,000-song collection and then strum the “strings” and tap buttons to progress from chord to chord. The app costs $2.99 but there is a free alternative, ZAP Guitar, without a link to Ultimate Guitar’s site.

10. Jamstar works with your actual guitar and your iOS or Android device’s microphone. You can learn to play rhythm, chords, scales and popular songs with the help of tutorials geared to beginners to advanced players. Real-time feedback lets you know if you’re playing correctly, and you can share your performance with friends, family and teachers.

UNCOVER ISRAEL - Get the ISRAEL21c
Weekly Edition free by email
Sign Up Now!
Bring Israel's story to life.
Millions of people around the world rely on us to gain a deeper understanding of Israel. We are the trusted source for original content you won't find anywhere else.
You can make a difference. Donate today to support journalism that brings Israel’s story alive.
SUPPORT ISRAEL21c
Read more on:   Serendip media, equala, pioano dust buster, Recorder master, JoyTunes, Tonara, Technology, Featured, Mobile, Entertainment, Culture