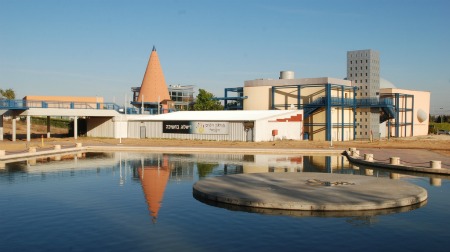 The Children’s Museum is the fourth most visited museum in Israel.

“I don’t want to go to some boring museum,” Idan, my seven-year-old, complained.

“But this is no ordinary museum,” I replied. “It’s especially designed for children and their parents to have a joint experience.”

Indeed, our visit to the Israel Children’s Museum in Holon proved most enlightening — and fun.

“What makes this museum different from any other in the world is that the child’s experience here is direct,” the museum’s general manager, Gil Omer, tells ISRAEL21c.

“We encourage the children to be actively involved. This means exploring everything around them — touching, feeling, climbing onto and even into the displays. They leave with emotional and cognitive insights, and smiles on their faces.”

“I want to do the whole thing again,” beamed Idan’s brother, Ariel, as he emerged with his mother from their guided 90-minute activity, “A Journey To Mend The Kingdom of Time,” designed for four- to six-year-olds. “I turned the hour glass and things began to happen …”

Idan and I had meanwhile visited “The Magic Forest,” where we followed a series of clues through tree trunks, down slides and under a snowstorm in search of a solution to a mystery that I cannot reveal.

“The concept behind these tours is that the child enters the story and becomes part of the plot,” explains Omer.

There’s a program for each age group. The others are “Following the Butterflies” or ” A Journey with an Owl-Cat” for 2½ to four-year-olds, and “The Aliens” for eight- to 11-year-olds.

Each accompanied by a parent — in my case, a passive onlooker — the children follow their fascinating journey in small groups, guided by a professional actor who acts as a moderator. Theatrical skills stimulate the children as the guide draws them into the story line.

“The children don’t always realize it, but the added value is the educational significance of the experience,” says Omer. 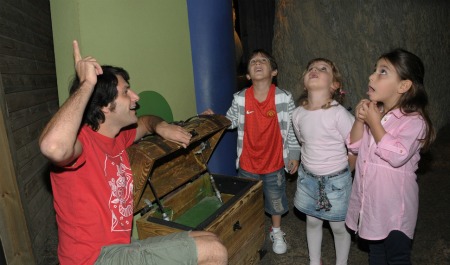 I experienced some cognitive insights of my own via the museum’s two unique programs for adults. In one, a speech-impaired guide helped me comprehend the faculties of non-verbal communication. The other transmitted me into the world of the sightless.

“Dialogue in the Dark” was a groundbreaking interactive project when the museum launched it in 2004 as a six-month exhibition. Hundreds of thousands of visitors later, it is going stronger than ever.

“The success has exceeded all expectations,” says Omer. “This program has had a genuine impact on Israelis’ attitudes toward the blind. Thirty-five blind and visually impaired guides work here. Instead of being guided, they now guide sighted people through their reality.”

This involves entering a totally lightless series of rooms that depict everyday scenes, and using the four remaining senses to explore this unfamiliar reality.

“It’s about breaking stereotypes,” explains Omer. “The Welfare and Social Services Ministry conducted a survey of visitors, and found that 96 percent said that this project is important for Israeli society.”

We donned soundproof headphones before entering the soundless world of “An Invitation to Silence.” During the 80-minute tour, the deaf guide somehow communicated a wealth of information without speaking a word.

“This program has also been an amazing success. We planned to run it for a year, and four-and-a-half years later it’s still fully booked. The feedback has been incredible. One visitor called the museum ‘a thinking man’s Disneyland.'” 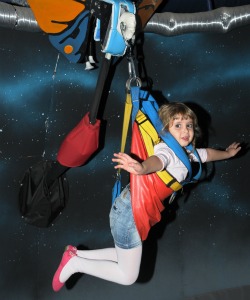 The museum is all about tactile experiences.

The museum celebrated its 10th birthday earlier this year with a mass Purim parade through the streets of Holon, a Tel Aviv suburb rich in attractions for youngsters.

Guest numbers are growing steadily — a record 230,000 in 2010, making it the fourth most visited museum in Israel.

The museum has also drawn dozens of child education experts from all over the world. “They come to study our approach, witness the children’s reactions and take the message back to their institutions,” says Omer.

The Children’s Museum is soon to be expanding. In May, the “Invitation to Silence” exhibition will move into new building currently under construction, and a new exhibition called “At Eye Level” will open.

“The idea is to teach children art appreciation,” says Omer. “We’re also working on another project, in which the guides will be senior citizens. We want to establish a real dialogue, to examine together the issues of ageing.”

Long after our visit was over, the experience remains.