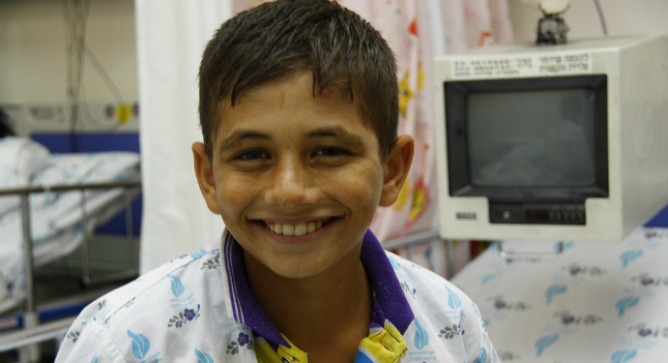 Mohamed Ashgar from Gaza waiting for his heart sugery. Photo by Sheila Shalhevet.

Mohamed Ashgar is bored. The 11-year-old, who suffers from rheumatic heart disease, has been at Wolfson Medical Center in Holon for a week waiting for surgery, but it was delayed because of poor blood test results. Now he just wants to have the operation and get back home quickly to his parents and his four brothers and sisters. His dream when he is finally well again – to go back to school. Ill health has kept him out of class for over a year already.

Sitting on the end of his bed in hospital pajamas, Mohamed has a cheeky face and a sweet, wide grin. He tells ISRAEL21c that he’d like to be prime minister when he grows up – maybe. It’s all so completely normal, except for one thing: Mohamed is from Betlahia in Gaza, and his operation is taking place in Israel in the midst of a bitter and dangerous conflict that has seen both sides bombing each other continually for seven days.

On Sunday, Mohamed and his grandfather Dahud, 58, who accompanied him into Israel, were in the hospital when a siren went off. They and the other children on the ward – many of them crying and scared — were hurried to the shelter, a room at the end of the corridor that doubles as a nurses’ cupboard with boxes of stationery and spare pajamas on the shelves.

The missile from Gaza was intercepted by the Iron Dome, but fragments of it fell a few meters from the hospital, causing a car to burst into flames. Another part of the shell was later found inside the hospital.

Mohamed is in Israel thanks to the Israeli charity Save a Child’s Heart (SACH), a non-profit organization based at Wolfson that provides children from developing countries, often those ravaged by war, with heart surgery and follow-up care.

He’s not the only child at the clinic from Gaza right now. There are also two baby girls – Remas, and Leen, who has Down syndrome — and a six-year-old boy, Salah, who arrived with his mother on Sunday during the siren. In the midst of some of the fiercest fighting, they managed to come by car from Khan Yunis to Gaza City, and then by ambulance to the Erez crossing, where they were met by Israelis and brought to Wolfson.

There are Palestinians from the West Bank too, including six-month-old Losen, who was in surgery when the sirens went off. Her father, Ahmad Faygan, 30, a municipality worker from Tul Karem, said the only thing he could think about as the sirens blared was whether the surgeons would abandon his daughter to take to the shelters. They didn’t.

There are five Iraqi children, and 18 others from Kosovo, Ghana, Nigeria, Tanzania and Zanzibar – all mixed in together.

‘Missiles are falling, but we carry on as usual’

SACH is the largest program of its kind in the world. Aside from bringing children to Israel for lifesaving surgery, the organization trains physicians, goes on missions abroad to operate on kids, and has a weekly clinic on Tuesdays for children in the West Bank and Gaza. The 70 to 80 medical staff involved in the program all work voluntarily. All medical costs for most of the patients are covered by SACH.

The organization was conceived by US immigrant Dr. Amram Cohen, and founded in 1995 by Cohen and Dr. Sion Houri, now head of the pediatric intensive care unit at Wolfson. It began with Ethiopian children and broadened to include children from 44 countries. Cohen died in 2001 in a climbing accident on Mount Kilimanjaro.

Some 3,000 children have had surgery at Wolfson through SACH, of which about half are Palestinian, and 70 percent of these from Gaza. SACH also sends Israeli doctors to train cardiologists and treat patients in the developing world. In addition, SACH personnel at Wolfson train medical practitioners from developing countries — so far, nearly 80 doctors, including about 20 Palestinians – and work intensively with doctors in Tanzania and Ethiopia. 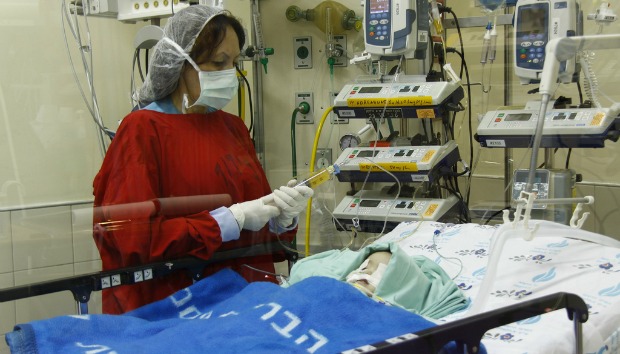 The goal is to duplicate Israel’s own experience, says Houri. “When I was a young doctor, Israeli children were dying because they needed heart surgery that wasn’t available in Israel. You don’t see that now. We sent physicians to train abroad, and had immigrants like Amram coming to Israel with knowledge and experience. If we managed it, then it’s doable for them, too.”

Does being in a conflict with Gaza make a difference to the staff?

“From outside it might look strange, but here it’s routine,” says Houri, as he walks the wards of the pediatric department greeting patients, parents and nursing staff in a mix of Hebrew, Arabic and English. “It’s Middle East logic: At the same time we are bombing each other, a mother comes with her son from Gaza for surgery. Missiles are falling, but we carry on as usual. For us it’s normal to be so abnormal.

“We aren’t political. We don’t belong to the left or the right, we’re just a group of physicians,” he adds. “You can’t be mad at a child. We know for sure that we have treated children whose parents were in Hamas. We don’t care. The only color we don’t tolerate is blue, because it means there isn’t enough oxygen in the blood.”

For the parents and children from Gaza right now, it’s no doubt a surreal experience. Their leadership is at war with Israel, militants are firing hundreds of missiles at Israeli cities and towns, and their own families are sheltering from Israeli retaliation. But here in Israel they are treated warmly and compassionately, and – most important of all – their children are being given vital surgery. 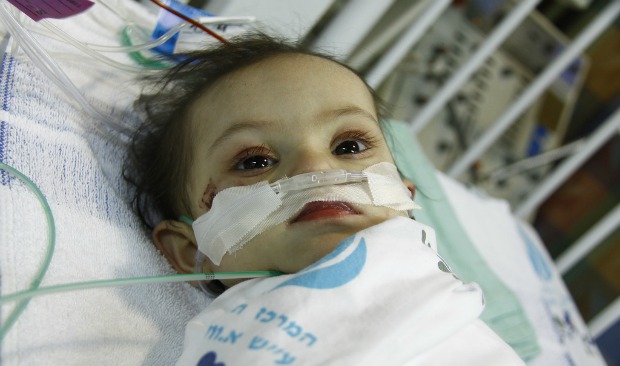 Leen recovering after her surgery performed by Save a Child’s Heart. Photo by Sheila Shalhevet.

“We are very glad to be here for the operation, but we really feel for our family back home,” says Dahud. “We aren’t frightened for ourselves; we’re frightened for them in Gaza. We feel more protected here.”

“We have family in Gaza and we’re very much afraid of what’s happening there, but we aren’t nervous about being here in Israel,” says 26-year-old Anfam Faygan, mother of Losen. “We have some anxieties about being hit by a missile, but we don’t feel any different from the other parents in the hospital. They treat our daughter as they would their own.”

It’s her daughter’s second operation at Wolfson. Her first was at the age of 10 days. Her final corrective surgery was on Sunday.

“The parents and children feel very safe in Israel,” remarks Houri, whose son is now serving in the Israel Defense Forces. “You can see they feel good, by their smiles.”

He remembers an incident some years ago when two Israeli soldiers in Ramallah were lynched by a mob of Palestinians. At the same time a Palestinian mother was at Wolfson with her child. “She was sitting outside the ward and she was completely white,” says Houri. “I had to calm her down. Here, now, people don’t seem to be in much anxiety. Their main concern is that people at home might get hurt, not that they are here amongst Israelis.”

Does all this work with Gaza have an impact on the situation?

“Judging by the amount of missiles that have fallen on Israel, it doesn’t seem to,” says Houri ruefully. “We just have to do what we can. People know the reality. It’s not just one child from Gaza that we’ve operated on, it’s not something that can be hidden away. We’ve operated on hundreds of children. We’ve had all kinds of reactions over the years. At Wolfson, Palestinian and Israeli mothers sit down and talk to each other for the first time.”

SACH is always in need of more funds. While some money comes from the Palestinian Authority, which helps support surgery for Arab children from the West Bank, most of the budget comes from fundraising.

The organization has now begun a $20 million fundraising campaign with the aim of building a worldwide center of competence at Wolfson that will serve as a model for similar centers in developing countries. Wolfson, which serves the poorer neighborhoods of South Tel Aviv, Holon and Bat Yam, has little in the way of luxuries. Parents who come with their children have to sleep in a tiny room crammed with four makeshift beds, and a curtain for a door.

If SACH can raise enough money, the new center will offer state of the art child oriented medical facilities, enabling them to carry out up to 400 pediatric heart surgeries a year.

As we finish, Houri goes on a quick tour of the intensive care ward before returning to his office. He stops by Losen. She looks tiny on the hospital bed and is wired up to dozens of machines. She’s crying fretfully as a nurse alters her pain medication.

“You see that blue line?” Houri says, pointing to one of the monitors. “It shows the saturation of oxygen in her blood. It’s 99; that’s normal. Before the operation it was just 60. She’s a bit miserable now, because she’s in pain. But she looks excellent,” he says with evident satisfaction.

In the meantime, Mohamed is still anxiously waiting for his turn. If his blood tests improve, the operation should go ahead next week. His grandfather, who worked for 40 years in Israel, hopes that one day the situation between Gaza and Israel will improve.

“I used to travel all over the country for work and then go home afterwards,” he says passionately. “I’m hoping that these days will come again.”

UNCOVER ISRAEL - Get the ISRAEL21c
Weekly Edition free by email
Sign Up Now!
Bring Israel's story to life.
Millions of people around the world rely on us to gain a deeper understanding of Israel. We are the trusted source for original content you won't find anywhere else.
You can make a difference. Donate today to support journalism that brings Israel’s story alive.
SUPPORT ISRAEL21c
Read more on:   SACH, Wolfson Medical Center, Save a child's Heart, Gaza, Tel Aviv, Health, Social Action, Gaza conflict