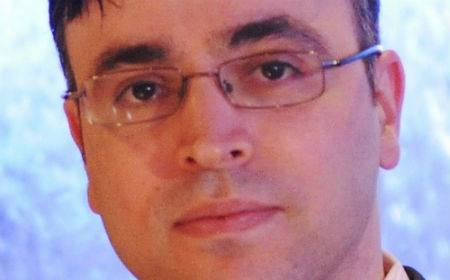 Hossam Haick has developed an artificial nose that detects disease biomarkers passing from the bloodstream to the lungs and out through the breath.

One of the most exciting advances in non-invasive diagnostic tools for cancer and kidney disease is the invention of Israeli-Arab chemical engineer Hossam Haick.

A professor at the Russell Berrie Nanotechnology Institute of the Technion-Israel Institute of Technology, Haick’s unique specialty is using breath analysis to detect disease.

Born and raised in the Christian Arab enclave of Nazareth, Haick is hardly the only non-Jew to have graduated from Ben-Gurion University of the Negev (1998) and the Technion in Haifa (2002). However, few people of any ethnicity have achieved on par with this 35-year-old former Fulbright Fellow.

In 2007, Haick appeared on the Yedioth Aharonot lists of 50 leading Israelis and four saluted Israeli scientists; and in 2008, on the Massachusetts Institute of Technology’s Technology Review list of 35 leading young scientists. Last year, he was named one of the 10 Most Promising Young Israeli Scientists by Calcalist and one of the Jerusalem Post’s Young Israelis of the Year.

“Throughout my educational career, many good people encouraged me to proceed beyond my personal limits and capabilities,” Haick tells ISRAEL21c, “and every time I found such supportive people I took them as a role model.”

The making of a super scientist

His first role model was his father, a mechanical engineer and lecturer at ORT Braude College in Karmiel. Hossam started perusing his father’s bookshelf at a young age, and by eighth grade he knew his future lay in the sciences. His mother, who has a college degree in history, chose to be a full-time mother to Hossam and his four siblings.

“When we were young, my family was very poor, because my father was still a student at the Technion,” recalls Haick. “Nevertheless, the priority for our parents was investing in learning, and this is one of main things that motivated me throughout my career.”

Nearly a quarter of the Technion student population is of Arab ethnicity, and although Haick is one of just a handful of Arab faculty members, he stresses that it is a very supportive environment.

“Borders between Arabs and Jews cannot be felt here at the Technion,” he states. “The only condition is to excel in science, and you will find your place.”

Haick developed an inexpensive “nano-artificial nose” (NA-NOSE) that detects disease biomarkers passing from the bloodstream to the lungs and out through the breath. He is founder and chief scientific officer of a company set up to commercialize the device through the Alfred Mann Institute of the Technion.

So promising is this technology that it won Haick a 1.73 million-euro Marie Curie Excellence Award in 2006 and a 1.8 million-euro European Research Council award in 2010.

An additional 5.4 million-euro grant is funding a European consortium of eight universities and companies, headed by Haick, to develop advanced screening nanosensors for lung cancer.

Haick works on the project “more than full time,” though it could take three or four years for NA-NOSE to reach the huge market that eagerly awaits it.

In the last two years, the device has proven effective in distinguishing between lung, prostate, breast and colorectal cancer, says Haick, “and we have shown an ability to distinguish between head and neck cancers and lung cancers,” he adds. And all this without blood tests or biopsies.

Haick did post-doctoral studies from 2002 to 2004 at the Weizmann Institute of Science in Rehovot and from 2004 to 2006 at the California Institute of Technology, where he first learned about electronic noses. He returned to the Technion, from which he’d earned his PhD, as an assistant professor in 2006.

Haick lives in Haifa with his wife, Rana, a chemist and food engineer at the Israeli Ministry of Health, and their three-year-old son. He reads literature in English, Hebrew and Arabic, and walks six to eight kilometers (four to five miles) before starting his day in the lab.

The number of awards this scientist has received — more than 40 — could fill several trophy cases. Among them are the Horev Chair for Leaders in Science and Technology, the OXYGEN Prize, the Norman and Barbara Seiden Prize, the Israel-France Award for Academic Excellence, the Herschel Rich Innovation Award, the Minerva Short-Term Research Award, the Bergmann Award for Excellent Young Scientists, the CREATE Award, the Al-Qendil Prize and the YMCA and Rotary Honorary Decorations.

His most recent honor is the Knight of the Order of Academic Palms bestowed by the French government, a civilian decoration established in 1808 by Napoleon Bonaparte.

Haick is associate editor of two professional journals; a senior scientific advisory member of nine national and international companies and institutes; and a scientific evaluator for the European Commission.

UNCOVER ISRAEL - Get the ISRAEL21c
Weekly Edition free by email
Sign Up Now!
Bring Israel's story to life.
Millions of people around the world rely on us to gain a deeper understanding of Israel. We are the trusted source for original content you won't find anywhere else.
You can make a difference. Donate today to support journalism that brings Israel’s story alive.
SUPPORT ISRAEL21c
Read more on:   Health, Research, People, Cancer, artificial nose, breath analysis, Technion-Israel Institute of Technology