Owners of a small Israeli comics store took America by surprise when they won the 2011 Will Eisner Spirit of Comics Retailer Award.

For Yuval Sharon, it all started with Alfred E. Neuman, MAD magazine’s famous gap-toothed mascot. Then came Conan the Barbarian, followed quickly by Tex and Zagor, and then the likes of Superman, Spiderman and Green Lantern.

Today the 37-year-old comics store owner points to Hellboy as his favorite superhero character. Yet for many in the comics world today, Sharon and his business partner Danny Amitai are the real superheroes.

The co-owners of Comics N’ Vegetables (CNV) are the 2011 winners of the celebrated Will Eisner Spirit of Comics Retailer Award. They’re the first Israelis ever to win the award.

“I was stoked. I didn’t believe it,” Sharon tells ISRAEL21c. “It took me about an hour to really understand that I won. It was one of the best feelings in the world that people from my community said we’ve done a good job.”

The Will Eisner Awards are the Oscars of the comics world. They are handed out annually at Comic-Con International, the largest and oldest comics convention in North America.

“The primary purpose of these awards is to call attention to and celebrate the best that the comics artform has to offer,” says Jackie Estrada, the awards administrator.

“It’s difficult to contain the excitement over hearing the news,” wrote Israeli-American artist Michael Netzer on his blog upon hearing of CNV’s win. “It’s perhaps this winning spirit of CNV, striving to make comics as popular and loved as anything else in our culture, that helped compel the Eisner Award judges to choose Comics N’ Vegetables for the prestigious award.”

Most of the nominees are large-scale enterprises. But Sharon and Amitai — who were nominated in 2009 and 2010, as well– proved that size doesn’t matter.

“We’re the tiny store who could,” says Sharon. “This isn’t David versus Goliath because there are no bad guys here. It really is the little store who could and I’m proud of our win.”

The name of Sharon and Amitai’s store might sound a bit odd for non-Hebrew speakers. The term, “and vegetables,” in Hebrew, means “and everything else.” 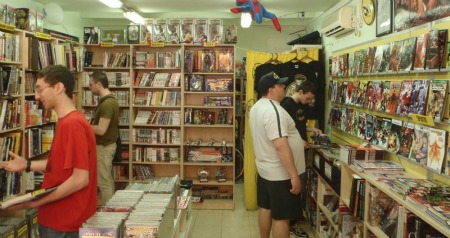 The shelves of Comics N’ Vegetables are lined with current releases, back issues and graphic novels alongside action figures and Lightsabers. Customers are known to congregate in the store for lengthy chats with the staff about one superhero or another.

Whereas Sharon the teenager used to have to wait for a mail-order subscription to get his hands on the latest comic, today his store releases new comics at the same time as stores in North America. 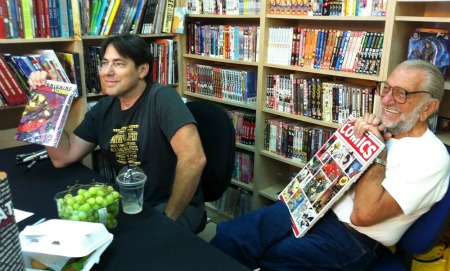 “I had a subscription to Marvel and worked all summer to pay for it,” he says. “But it was amazing; every week I got a comic from the US. It was pure heaven. I read it five times in a span of two days.”

In 2001, he and Amitai set up an online shop to help others access the superheroes they admired. In 2005, Comics N’ Vegetables opened in downtown Tel Aviv, relocated around the block to a slightly bigger space a year later, and then in 2009, expanded to a second store in Ra’anana, about 25 minutes from Tel Aviv.

“The community is a lot bigger now; a lot of people read comic books now,” Sharon says. “There is more exposure to comics now; it’s more in the mainstream attention. There are also more Israeli comic books now. People aren’t embarrassed to say they are comics fans.”

Contributing to the community

One of the main criteria for the Will Eisner Spirit Award is supporting the comics art medium in the community and within the industry at large.

Sharon and Amitai’s names are known in the Israeli comics community. They’ve helped behind the scenes with the International Animation, Comics & Caricature Festival in Tel Aviv, now in its 11th year, and the founding of the Israeli Museum of Caricature and Comics in Holon.

And, perhaps most importantly, they founded Comics for Everyone, an association of Israeli comics creators volunteering to inspire creativity in disadvantaged children. Sharon’s wife, illustrator Elite Avni Sharon, organizes the activities for the group, aimed at offering a better social environment through the comics medium. 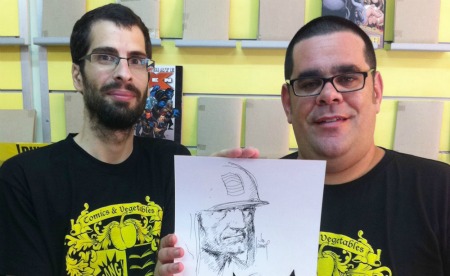 “They don’t just hand out the award for nothing,” says Sharon, a father of one.

“For the first time big American artists came and they were in my store for a signing,” says Sharon excitedly. “A legendary American comic artist doing an exhibit in Israel! I couldn’t believe this was happening.”

Moreover, says Sharon, Joe Kubert donated the original manuscript of Yossel – his graphic novel about the Holocaust — to the Israeli Museum of Caricature and Comics.

“The creators of comics, like the heroes created under their pencils and brushes, play an important role in the stories comprising modern traditions. The new hero is not caped, nor does he possess superpowers or super-weapons. He is equipped with a pencil, a brush, and a stylus,” wrote Galit Gaon, chief curator at the museum.

Israel is only 63 years old. But check out the comics pages of just about any international newspaper, magazine or comic book and it’s more than likely you’ll come across the name of an Israeli cartoonist.

Asaf and Tomer Hanuka have collaborated on the comics series “BIPOLAR.” Asaf’s graphic novels have appeared in the US, France, Israel and Spain while Tomer’s clients include The New Yorker, DC comics, Nike and Microsoft.

Maya-Gur is the creator of the popular Israeli superhero, Falafelman.

Uri Fink has a number of comic series to his name, including “Zbeng!” that deals with Israeli stereotypes; “Sabraman,” about the son of parents murdered in the Holocaust; political and current events-oriented “Shabtai”; and “Tales From the Ragin’ Region,” addressing the Israeli-Palestinian conflict.

Then there’s Rutu Modan, an illustrator and comic/graphic novel artist who has been published around the globe; Israeli-American artist Michael Netzer who has worked on Batman, Wonder Woman, Spider-Man, Legion of Superheroes and others; and Gilad Seliktar, an illustrator and comic artist who has published work in most of Israel’s daily newspapers, magazines, and on television.

“There are a lot of Israeli comic writers and very good ones,” says Sharon. “Now there’s an audience. People will hear more about Israeli comics artists.”