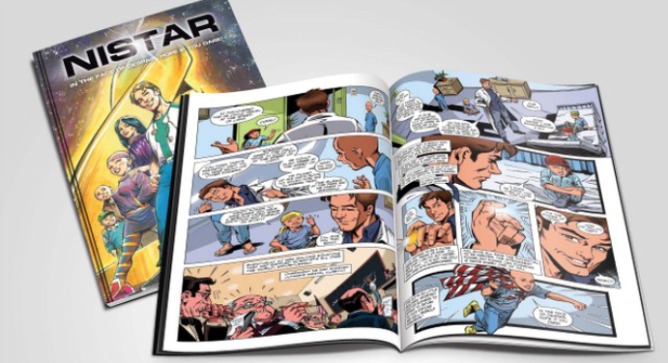 Shira Frimer created Dr. JJ Barak, a superhero starring in her Nistar graphic adventure novel. Many would say she’s a superhero herself.

Shira Frimer is on a fast track this year. Spurred by the goal to give away free copies of her graphic novel for kids with cancer during Children’s Cancer Awareness Month in September, she worked night and day to make it happen.

Frimer, a 37-year-old art therapist living in Israel since 1995, poured 10 years into the publication of Nistar (“Hidden”), her debut graphic adventure novel for kids with cancer. The book is illustrated by Josef Rubinstein of Marvel and DC comic book fame.

The unusual book draws on Frimer’s own experience with cancer, her knowledge of Jewish and kabalistic sources and her love of comic books.

“Children affected by cancer are forced to contend with a noxious villain. They need relief from the emotional distress that comes with illness,” Frimer tells ISRAEL21c in an interview in her Rehovot clinic.

“I try to empower them, to encourage them to visualize themselves as heroes, to emphasize the part of their lives they can control. The one thing cancer can’t touch is their imagination, the freedom to create.”

On September 15, KidsComicCon hosted a festive launch of Nistar at the Ronald McDonald House in New York City, a “home away from home” for families coping with cancer.

Beth Stefanacci, executive director of New Jersey-based Go4theGoal, a nonprofit that supports parents and children with cancer, contacted Frimer “after receiving a Google alert in the early winter. “There was something calling me to reach out to Shira.”

The Google Alert was triggered by Frimer’s “from the heart” campaign on crowd-funding platform Indiegogo to raise funds to cover the cost of completing illustrations and for an initial 5,000 copies of Nistar.

“Indiegogo was fantastic. It helped me connect with the world,” says Frimer. The initial goal was $15,000; but the campaign resulted in $25,000.

“I am blown-away by your story and your desire to turn your own challenge into a book that will have a positive impact,” said one contributor. Contributions came in from Australia, New Zealand, Brazil, Germany, the UK, Sweden, Finland, Ireland, Kenya, Canada, and the US.

The story Frimer tells in Nistar pulls scenes from her own life. Only a couple of months after she and her childhood sweetheart, Yaakov, became engaged, Yaakov was diagnosed with Ewing’s sarcoma, a pediatric bone cancer.

Undaunted, the 19-year-olds decided to go on with wedding plans. Two years later, Shira gave birth to twins. During treatment at Schneider Children’s Medical Center in Ramat Gan, Yaakov managed to finish a year of law school. He also reached out to the children in the ward. Gifted with natural charm, he became their “big brother,” using humor to diminish their fears.

When her young husband died at the age of 24, Frimer found two ways to escape from her grief. “I studied Jewish philosophy and learned some of the legends and ideas of mysticism. I also became an avid reader of comic books and high-level graphic novels.”

She completed a master’s degree in expressive arts therapies at an Israeli branch of Lesley University in Massachusetts.

“I was most influenced by Art Spiegelman. If he could use the comic book medium to depict the Holocaust, than I could address childhood cancer in the same way,” she says. Spiegelman won the Pulitzer Prize for Maus in 1992.

In the 116-page fantasy suspense story, Yaakov’s charismatic personality is reflected in the story’s hero, Dr. JJ Barak, once a cancer patient himself. 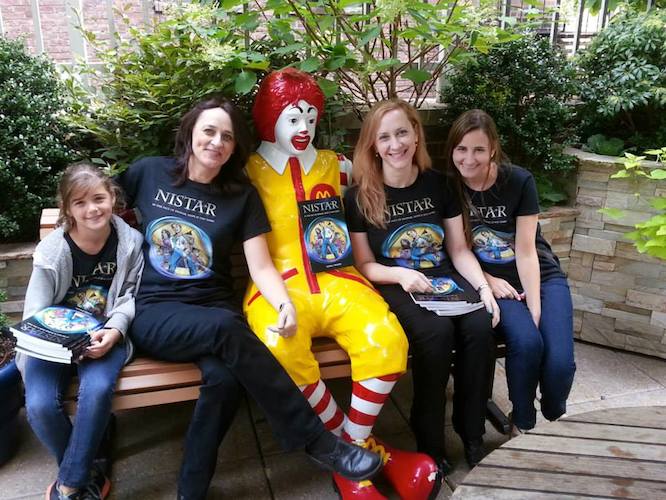 Shira Frimer, second from right, at the launch of Nistar at Ronald McDonald House in New York.

Driven by a desire to find the cure for cancer in a lost stone that disappeared into a dark world, he challenges the villain who rules there, and returns to the light.

“Nistar gives a child who is battling cancer a chance for relief from the emotional distress that comes with illness. These kids deserve a superhero as a role model, who can validate their struggle, lend them hope and resilience, empathy and kindness,” says Frimer. “The message is to stand up to the disease, to say ‘I am still me, and I am here.’”

Michael Uslan, executive producer of the “Batman” movie franchise, wrote in his introduction to the book that for anyone experiencing childhood cancer, “it’s clear that what is NOT needed is a depressing story of illness and treatment. What IS needed is an uplifting adventure that can inspire the fight to come, rally the on-going noble battle, and point the way to the light at the end of the tunnel. And that’s where Nistar shines.”

In a recent podcast, Paul Castiglia, an “Archie” comics creator and book writer, said: “JJ is now one of my favorite superheroes, and Shira Frimer is also.”

A film in the future?

Frimer hopes there will be more requests and contributions to enable a second printing to reach more children with cancer. With 12,000 new cases of pediatric cancer in the US alone each year, the need is great. Translation into other languages is also on her “dream” agenda.

“A sequel is also spinning in my head,” she says. “My twins, now 16, read the book and posed a lot of questions. A film is also a possibility,” she says with a wistful smile.

Using her professional skills, she is also in gear to launch a website, www.CreativeCoping.com.

“My goal is to create a community of creative superheroes for children battling disease and life’s challenges — a place where they can share their stories and creative ideas with others, a place to learn, and for parents to get tips on how to use creative expression to help children, and siblings cope.”

Frimer is energized by her newfound fans. “There were so many setbacks along the way. It is all about persevering. That’s the message I give to kids: ‘Hope if you dare.’ It is part of the hidden power of Nistar.”

Go4theGoal arranged a book tour to hospitals on the US East Coast in September, and will distribute several thousand copies of Nistar. HP/Indigo Israel has offered promotion and marketing guidance and is also doing a pro-bono printing for contributors in Israel.