Made it! Nicky’s husband and two of her kids enjoy the view at the top. Photo by Nicky Blackburn

When my Israeli husband and kids go on holiday, their idea of fun is always something extreme. Snowboarding off-piste, diving through reefs, kayaking down a narrow stream in bear country, rock climbing up a stiff mountain or, even better, leaping off one.

As a cautious Brit by birth, I always make sure to bring a book to read instead.

It was no surprise, then, that when we flew to Costa Rica a few years ago with our middle and youngest sons and began our trip in Arenal National Park, a beautiful spot with an active volcano, my husband immediately decided we should do the Cerro Chato hike.

Suspicious, I looked it up in the guidebook.

“This is the most challenging hike in the region,” it read. “The trail is in rough shape and should be considered an extreme hike with a difficult level. Get ready for strenuous uphill and downhill hiking over arduous terrain.”

“Are you sure?” I asked him. “It says you have to be in good physical condition.”

The next day we asked the receptionist at the hotel where to start the hike, and set off.

“Be careful of the snakes,” he called out cheerily after us. “Sometimes you think you’re grabbing a tree branch, but it’s actually a snake!”

The boys thought this was hilarious. Me, not quite so much. 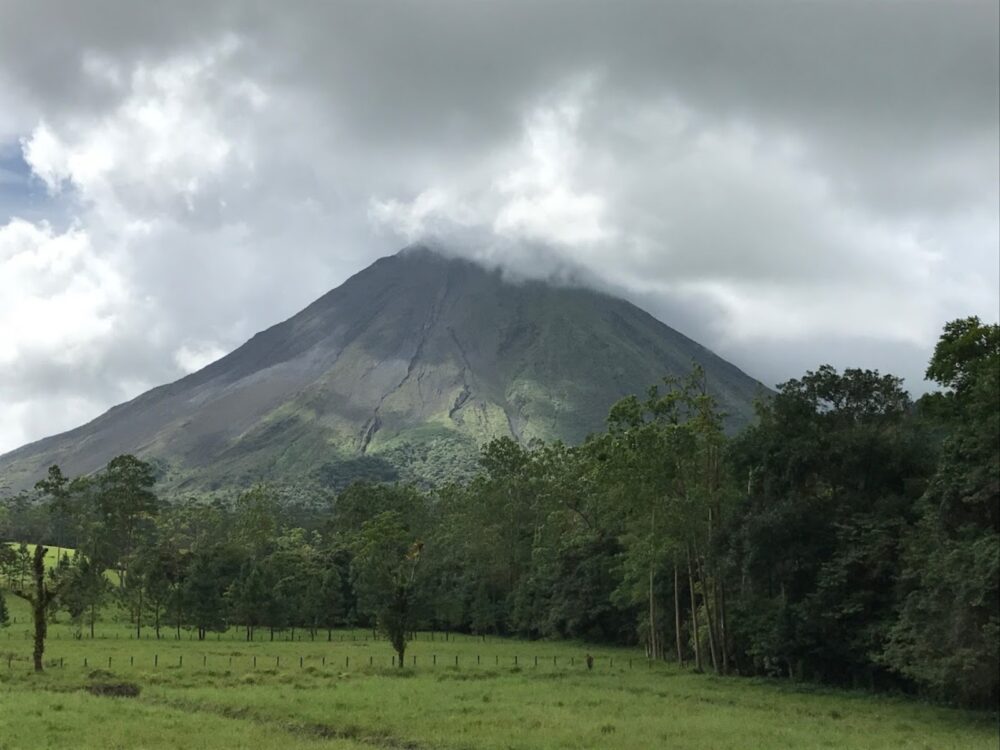 After a gentle and pleasant saunter through the beautiful Arenal park, we reached the base of Cerro Chato, a now dormant volcano, and suddenly the path took a turn into the kind of dark, impenetrable forest that haunts fairy tales.

It also went up, straight up.

The kids, 11 and 16 at the time, set off at a run, leaping and scrambling up the rapidly disappearing path.

“This isn’t a trail,” I grumbled as I followed them. 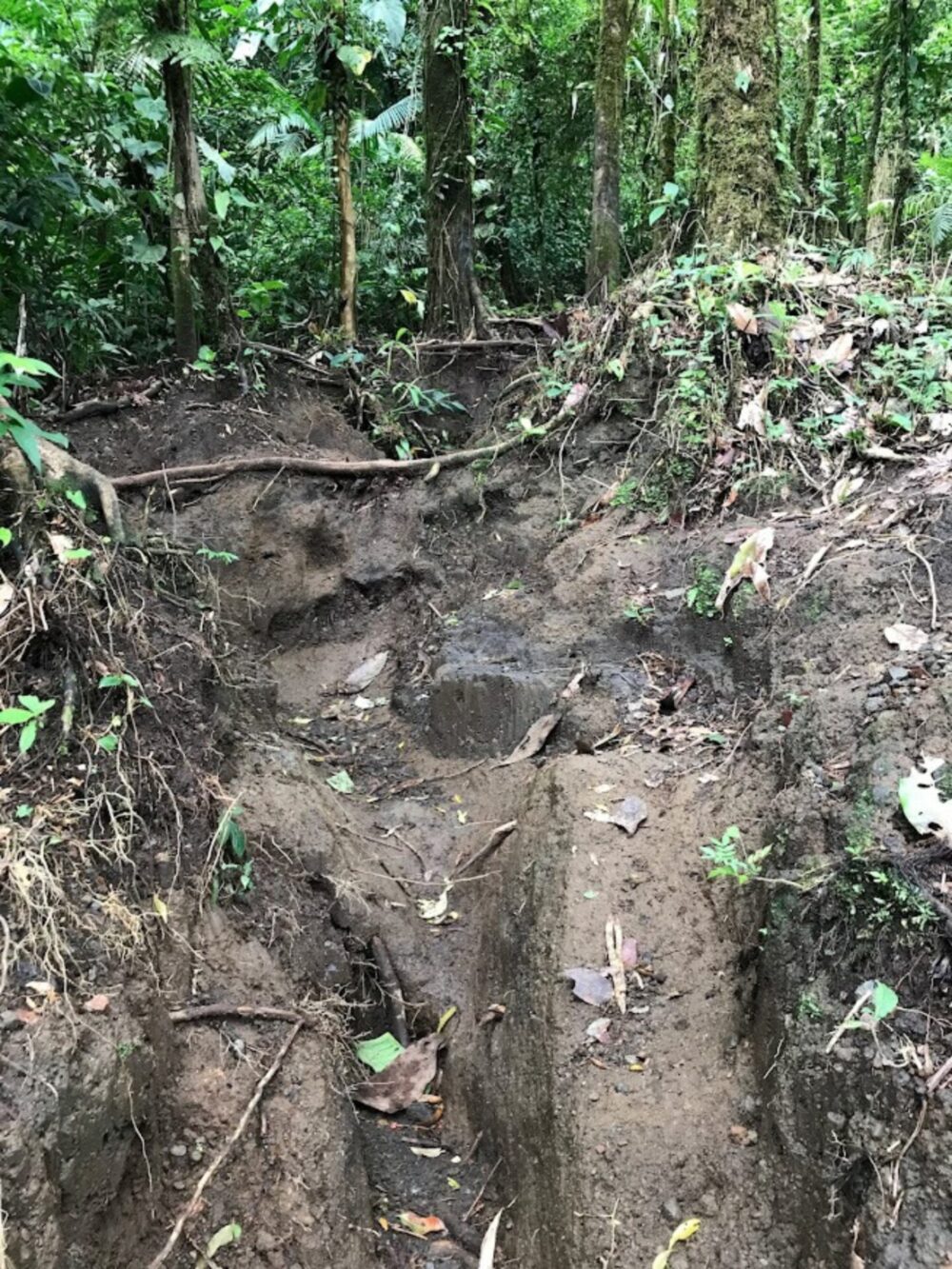 This is not a trail. The route up the Cerro Chato Volcano. Photo by Nicky Blackburn

Within a short time we were surrounded by dense forest, unable to see anything more than a few meters ahead, and the trail just went on and on, upwards and upwards.

This wasn’t walking, it was climbing. Hoisting yourself from tree root to tree root. After a while I gave up checking whether I was grabbing a branch or a snake – I figured the boys whooping and shouting up ahead would have chased them all away already.

It took a couple of hours and it was one of the hardest climbs I have done, but then suddenly we burst out of the trees into a clearing that looked down into the cone of the volcano, with a beautiful turquoise lake in the middle.

It was such a stunning view. We sat on the edge, sweaty, tired and satisfied, and watched the mist drift across the cone of the volcano. 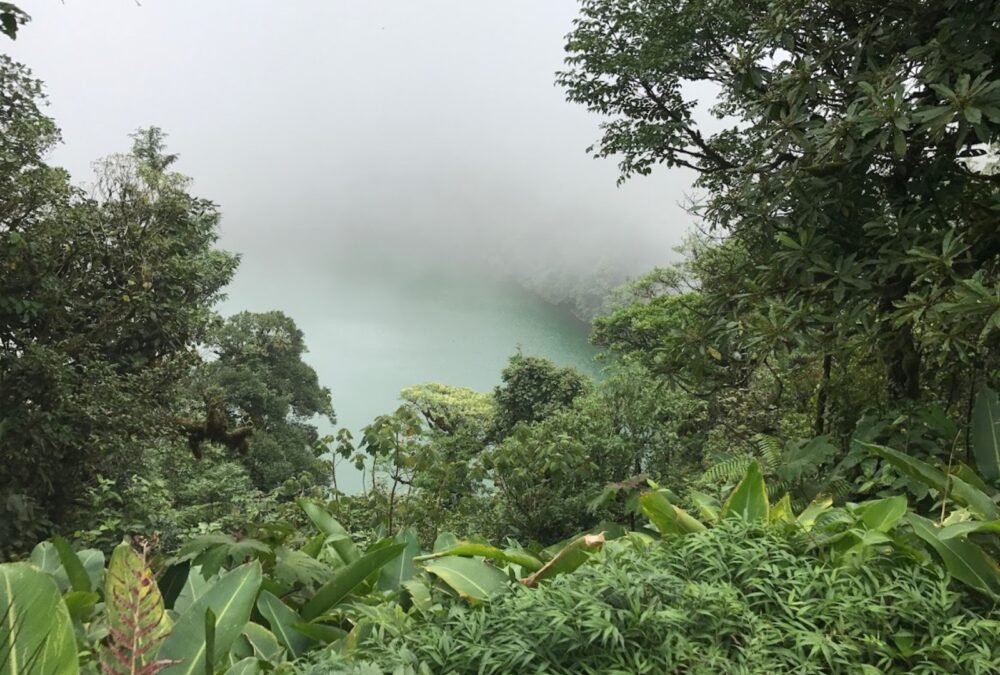 Mist drifts across the cone of the Cerro Chat volcano. Photo by Nicky Blackburn

About 20 minutes later, there was a noise behind us, and suddenly someone staggered from the undergrowth beside us. He was drenched in sweat and breathing heavily.

He saw us sitting there peacefully and a look of shock crossed his face.

“How?” he said, bending over to try to catch his breath.

“How, did you do that hike with kids?”

We all looked at one another. “It was easiest for them,” my husband replied.

The man sat down next to us. He was from Silicon Valley, a high-tech engineer taking a solo trip to Costa Rica and beyond.

Where are you guys from?” he asked us finally, flummoxed by my British accent, and the assorted unidentifiable foreign accents my husband and children have.

A look of understanding crossed his face. “Ah,” he said, “Now it makes sense.

“Wherever I go that’s a difficult or challenging climb, when I get to the top, there’s an Israeli already there. It doesn’t matter where I go, all over the world – an Israeli always got there before me.”

We laughed about it, but as we got ready to make the walk back down – a trek that surprisingly was even harder than the way up — I realized that his casual observation had hit a deep truth about Israeli society. 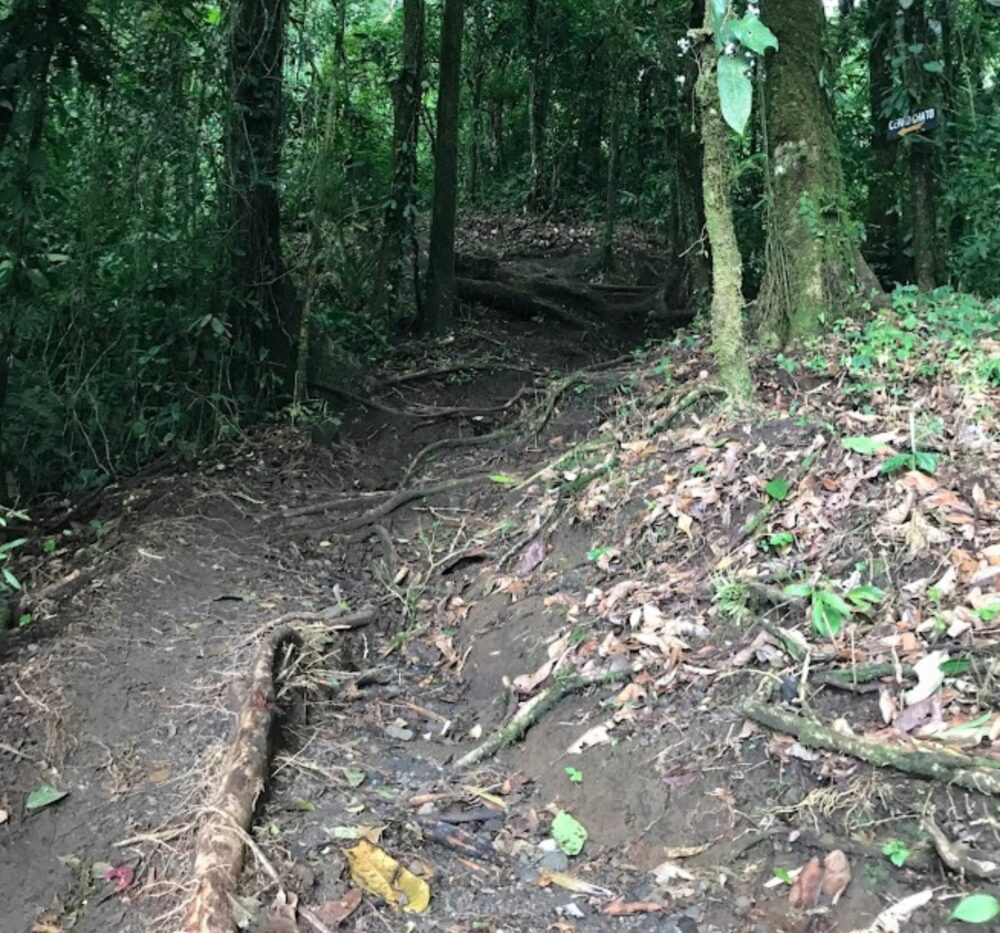 An easier part of the Cerro Chato trail. Photo by Nicky Blackburn

Israelis love a challenge. They love a challenge and they love to travel. Put it together and you have Israelis making their way up every mountain, fording every river, and trying out every adventure they can.

It’s not that people from elsewhere don’t do this too – it’s just that Israelis do it en masse. When you are traveling in the Far East or the Americas, it would seem, from the number of tourists, that Israel must be the size of Britain or France, not a nation of just 9.2 million.

Israelis love to chill in cafés in Europe, but you’ll also find them in absurdly high numbers climbing Kilimanjaro,  trekking in Tibet, or bungee jumping in New Zealand.

It starts with the Scouts. In Israel, the scouting movement is led by the kids and they go on frequent trips that involve hiking the desert in 30+ degree Celsius heat, followed by overdone schnitzels they cooked themselves, overnight camping and another long hike the next day.

Then there’s the experience of the army, where kids get used to taking on even more rigorous physical and mental challenges.

And of course, it’s the geopolitical situation here – there’s nothing like regular wars and missile attacks to make you want to seize the day.

And partly, inevitably, it’s historical. Israel was founded in the wake of the Holocaust, and Israel’s citizens feel an imperative to live life to the fullest.

There are so many reasons. The books Chutzpah and Start-Up Nation: The Story of Israel’s Economic Miracle go into far greater depth about the soul of an Israeli that I can here.

But what it all boils down to is an incredible joie de vivre. A zest for life and living it to the fullest, that you can’t help but admire and respect, even as you trip and stumble your way down a volcano.

So I’ll continue to watch my family and friends here challenge themselves with the world’s toughest climbs and hardest tests and adventures. I’ll applaud them when they get to the top. I’ll just make sure to keep a book with me at all times.

UNCOVER ISRAEL - Get the ISRAEL21c
Weekly Edition free by email
Sign Up Now!
Bring Israel's story to life.
Millions of people around the world rely on us to gain a deeper understanding of Israel. We are the trusted source for original content you won't find anywhere else.
You can make a difference. Donate today to support journalism that brings Israel’s story alive.
SUPPORT ISRAEL21c
Read more on:   Tales from the heart, Culture, Travel