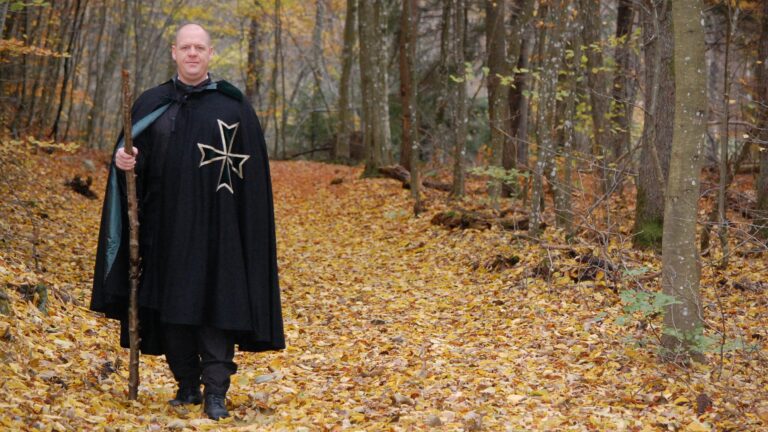 These boots were made for walkin’…

A brother of the Military and Hospitaller Order of St. Lazarus of Jerusalem is days away from completing a five month, 5,000 kilometer pilgrimage from Lund in Sweden on foot to Jerusalem. Jӧrgen Nilsson, 39, is scheduled to arrive at the Jaffa Gate of Jerusalem’s Old City on Sunday, April 21, 2013.

Nilsson set out on his Pilgrimage for Peace on November 18, 2012. He walked through Denmark, Germany, France, Italy and Greece, before arriving in Haifa on April 11.

His multi-purpose mission was to raise money for charities, increase awareness against xenophobia, and to highlight the need for peace.

He chose to walk to Jerusalem for its symbolism.

“Firstly, the ancient and holy city has always been a focal point of both conflict and peace. It is a symbol for the efforts needed to obtain a more peaceful world. Secondly, I am a Brother of the Military and Hospitaller Order of Saint Lazarus of Jerusalem. Last year the order moved back and restored its magisterial seat in Jerusalem after several hundreds of years in exile in France. I decided to make a part of this pilgrimage a celebration of this great milestone in the order’s history,” he said.

Nilsson will be a guest of honor at the ribbon-cutting ceremony of First International Jerusalem Symposium on Green and Accessible Pilgrimage on April 21. He will also speak about his spiritual journey to the Holy Land in a round table session entitled “Positive Footprints” at the event.

UNCOVER ISRAEL - Get the ISRAEL21c
Weekly Edition free by email
Sign Up Now!
Bring Israel's story to life.
Millions of people around the world rely on us to gain a deeper understanding of Israel. We are the trusted source for original content you won't find anywhere else.
You can make a difference. Donate today to support journalism that brings Israel’s story alive.
SUPPORT ISRAEL21c
Read more on:   News, Jerusalem, Peace, Order of St. Lazarus of Jerusalem