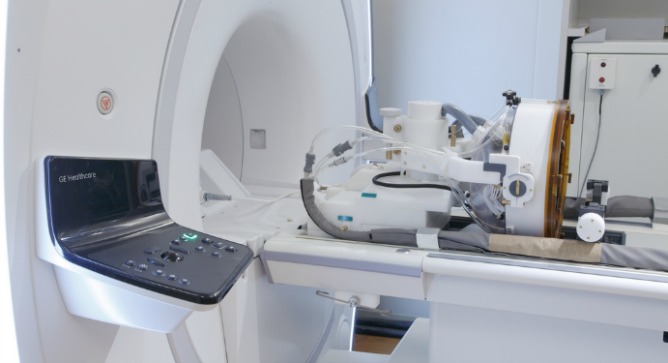 Surgery without scalpels and scars? It’s not science fiction. Israel’s Insightec is in the midst of transforming the operating room with its Exablate MRI-guided high-intensity ultrasound technology.

The Exablate O.R. system uses interchangeable “cradles” set on a regular MRI treatment table. The tool allows doctors to destroy targets, such as tumors and uterine fibroid cysts, deep inside the body without incisions. The alert patient is monitored in real time, and changes in treatment parameters can be made instantly.

Exablate O.R. is already being used in several countries, including Europe and the United States, to treat uterine fibroids and pain caused by bone cancer.

“We started with uterine fibroids, which afflict a quarter of all women sometime in their lives and usually are treated with a hysterectomy,” says Insightec president and founder Kobi Vortman. “We believe for patients looking for alternative treatment to preserve the uterus, this is effective and safe.” 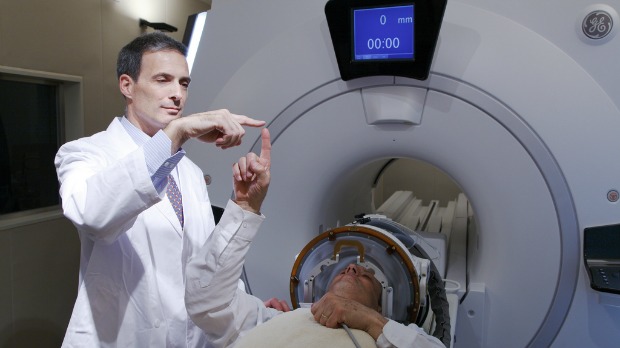 The doctor can monitor and communicate with the patient and adjust treatment during the procedure.

More than 9,000 patients in the United States, Europe and Asia have been able to avoid surgery as the Israeli technology has successfully destroyed fibroids through ultrasound.

A two-venue study begun in January at the Mayo Clinic and at Duke University is determining how Exablate compares with the usual treatment for fibroids, the invasive uterine artery embolization. Meant to gather data for medical insurance reimbursement purposes, the study is to include about 200 patients over three years at the two centers.

In October 2012, the US Food and Drug Administration (FDA) approved Exablate’s use in alleviating pain from cancerous bone tumors. A randomized international clinical trial at 10 to 15 sites will soon begin comparing Exablate with radiation therapy – currently the gold standard for the pain of metastasized bone cancer – as a first line of defense for newly diagnosed patients.

Getting past the blood-brain barrier

In the United States, the system is undergoing FDA-approved safety and effectiveness trials in these three areas. Using focused ultrasound in the brain is revolutionary because it gets past the blood-brain barrier as drugs cannot.

As opposed to surgery and ionizing radiation, two current alternatives to treat these conditions, Exablate Neuro leaves the patient’s skull intact and is entirely non-invasive.

Neurosurgeons and physicists at leading research hospitals in Switzerland, Korea, Japan, Canada and the United States are currently experimenting with Exablate Neuro – which was invented by a Toronto imaging researcher and developed at InSightec — to treat essential tremor, a common movement disorder affecting millions of people worldwide. Patients who do not respond to medication often have to resort to surgical implantation of deep brain stimulating electrodes, or radiosurgery with ionizing radiation.

“Essential tremor is a relatively clear-cut disease with a single symptom,” Vortman tells ISRAEL21c. “With Exablate Neuro, we found that at the end of a single treatment, 15 patients suffering for years from this debilitating disease are back to themselves again.”

The first essential tremor patients in a Phase III study are expected to be enrolled this year, with the hope of devising a full treatment protocol by the end of next year in order to receive FDA approval for this application.

Vortman says that Insightec technology will one day be the treatment of choice also for epilepsy, dissolving blood clots and getting drugs delivered to specific targets in the body.

With the exception of lung tumors, and cardiac and orthopedic procedures to repair functionality, Exablate has almost limitless applications, says Vortman, who has degrees in electrical engineering and electro-optics from the Technion-Israel Institute of Technology.

The company, based in Tirat Carmel in the north with a second office in Or Yehuda near Tel Aviv, was founded in 1999 and has 125 employees. It is privately held by Elbit Imaging, General Electric and MediTech Advisors.

UNCOVER ISRAEL - Get the ISRAEL21c
Weekly Edition free by email
Sign Up Now!
Bring Israel's story to life.
Millions of people around the world rely on us to gain a deeper understanding of Israel. We are the trusted source for original content you won't find anywhere else.
You can make a difference. Donate today to support journalism that brings Israel’s story alive.
SUPPORT ISRAEL21c
Read more on:   Health, Medical devices, Kobi Vortman, InSightec, surgery