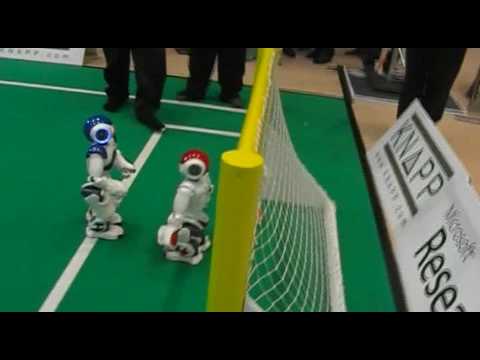 The ViRobe developed by Prof. Moshe Shoham is a one-millimeter robot that can deliver chemotherapy directly to cancer cells or take snapshots of a body’s internal organs.

Open your imagination and you might just find some lifesaving, time saving and entertaining robotics invention that has already been invented in Israel.

Many of the advances in this science fiction-inspired field are based on the kind of real-world computer programming and artificial intelligence at which Israeli researchers excel.

Recently featured on CNN, world robotics expert Prof. Moshe Shoham of the Technion-Israel Institute of Technology invented the world’s only robotic tool for back surgery, the SpineAssist. Developed by Israeli company Mazor Robotics, it’s the smallest of five medical robots in daily use in countries including the United States, Holland and Israel.

Robots that deliver chemotherapy on target

“SpineAssist attaches to the patent’s body so that that there is no damage caused to the surrounding nerves when implants are being placed in the spinal cord,” explains Shoham to ISRAEL21c. “One can insert instruments through the arm to minimize damage to vital organs.”

Shoham also developed ViRob, a clever one-millimeter robot that can swim past the stomach to deliver a payload of chemotherapy directly to cancer cells or, when equipped with a camera, take snapshots of a body’s internal landscape for diagnostic purposes. He’s also working on a small robot that can navigate through amniotic fluid to diagnose fetal abnormalities and even help perform in-utero surgery.

A robot in the Israeli robotics soccer team takes some time out from the game.

Down the hall from Shoham at the Technion is the lab of Prof. Alon Tal, whose “snake” robot for endoscopic heart surgery is now in commercial development. The snake-like robot can be maneuvered around organs for better control and vision during “keyhole” surgical procedures.

This robot is a real kick

While most robotics applications today are basically remote-control machines, Kaminka is focused on the brains behind robots, developing the algorithms – detailed mathematical instructions — to really make them think in a human way. Since Israel is already a leader in algorithm software development, he says, it’s just another step to make it a leader in robotics development.

His lab, which utilizes resources from social psychology, competes annually in the international robotic soccer competition, RoboCup. Its winning formula involves multi-robots programmed to work together like a real team.

Kaminka’s multi-robots also have many possible security and defense applications. They can be used to carry out search-and-rescue missions, stake out a building with suspects and terrorists inside, and effectively man and patrol borders.

As an Israeli, Kaminka knows how important it is that Israeli borders are secure. But soldiers can be killed or kidnapped on routine surveillance, and captive soldiers, like Gilad Shalit, compromise national security. His idea was to create a team of intelligent sports utility vehicles that drive themselves. The idea is not novel, but the “brain” that Kaminka gives them is what makes his robots unique.

CardioArm’s unique snake-like robot can be maneuvered around organs for better control and vision during “keyhole” surgical procedures.

The SUV robots, now being commercialized by G-NIUS, are programmed to work in teams so that no area of the border is left without a watchful “eye” that knows how human beings might attempt to sneak under their radar.

Capable of being driven by people, these SUV robots could be an attractive solution against border and drug runners in the United States, which needs help in keeping out illegal immigrants from Mexico.

Companies that have evolved from Kaminka’s lab include the lawnmower robot maker Friendly Robotics and Maytronics, a leading US pool-cleaning concern. There is also Cogniteam, which is building a platform so that robotics developers can easily implement their algorithms.

“Artificial Intelligence is just software and another way of thinking software development,” says Kaminka. “Israelis are building very good software and that’s Israel’s future if you look at high-tech development. It has all the resources to be a leader in robotics.”

Robots in the Negev

Another BGU research project now in development by Yael Edan is Gestix, a robotics device than enables hands-free image scanning in a surgical theater. This device is intended to allow for a more purely germ-free environment, thereby preventing hospital-acquired infections. Using Gestix, surgeons can manipulate digital images using hand motions rather than touching a screen, keyboard or mouse.

UNCOVER ISRAEL - Get the ISRAEL21c
Weekly Edition free by email
Sign Up Now!
Bring Israel's story to life.
Millions of people around the world rely on us to gain a deeper understanding of Israel. We are the trusted source for original content you won't find anywhere else.
You can make a difference. Donate today to support journalism that brings Israel’s story alive.
SUPPORT ISRAEL21c
Read more on:   Health, Research, Technology, Virobe, Rpbotics