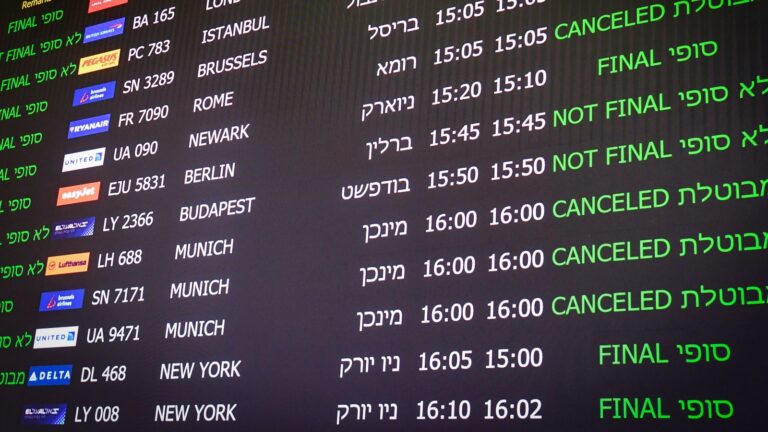 This arrivals board at the Ben-Gurion International Airport on March 11, 2020, shows three flights originating from the New York area. Photo by Flash90

Early on in the Covid-19 pandemic, Israel banned flights from nearly every country except one – the United States. That may have turned out to be a fatal mistake.

Israel’s early action in closing its borders is credited with keeping the crisis from overwhelming the country’s health system. Still, there have been nearly 17,000 cases of infection in the country.

Now we know where most of them came from.

Researchers at Tel Aviv University conducted a large-scale genomic sequencing of the novel coronavirus, analyzing the blood of 212 patients in Israeli hospitals and comparing it to sequenced genomes from 4,700 patients in other countries.

The study, published this week as a preprint on the website medRxiv.org, found that more than 70 percent of patients infected in Israel had a particular strain of the virus that originated in the US.

In addition, the researchers discovered that 80% of the Covid-19 cases in Israel resulted from just 10% of coronavirus patients, so-called “super-spreaders.” That means a mere 800 people are believed responsible for four out of five Israeli infections.

The research team, led by TAU evolutionary virologist Adi Stern, was surprised by the results given that just 30% of the people who arrived in Israel during the crisis came from the US.

Stern speculates that visitors from America often have family members in Israel, leading to a greater number of interactions. Visitors from other countries tend to be tourists who have limited contact with Israeli citizens.

Israel failed to quarantine new arrivals from the US at first, specifically during the time that flights from other countries were grounded. Some of these travelers may have been “super-spreaders.”

The novel coronavirus, like all viruses, mutates slightly as it spreads, so that different parts of the world tend to have different genomes.

“We can look at these mutations as a kind of barcode that helps us keep track of the progression and transformation of the coronavirus as it moves from country to country,” Stern explains. In Israel, 70% of Covid-19 patients were infected with the same virus genome.

The genomic model shows that the rate of infection in Israel decreased significantly following strict quarantine measures. The model will also help health professionals determine the rate of infection and will “serve as an important basis for informed decisions about which institutions to close, for what amount of time and in what format,” Stern says.

“We have developed tools that will allow us to cope, in real time, with the next outbreak that may occur.”

The TAU model revealed one other piece of alarming data: only about 1% of the Israeli population has contracted the virus – a far cry from the herd immunity required to truly bring the pandemic under control.