Stimatix GI’s artificial sphincter will allow thousands of people with stoma to shop, swim and enjoy daily activities without having to worry about an ‘incident.’ 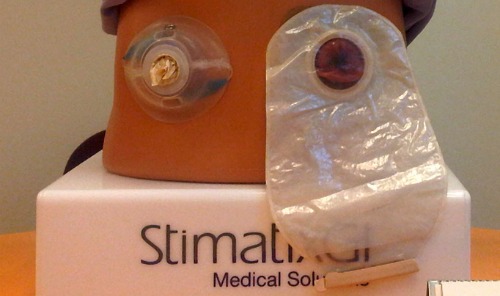 Some high-tech advancements help us work faster, while others enhance our free time. The high-tech advancement developed by Israeli bio-med startup Stimatix GI does something far more basic. It has the potential to restore dignity and opportunity to hundreds of thousands of people who, until now, have had no choice but to put up with the pain and indignity of loss of bowel control.

“It’s a serious issue for thousands of people around the world,” says Stimatix GI CEO David Hanuka. “For the past 50 years, there has been essentially one basic solution for people with stoma who were unable to control their bowel content evacuation.”

A stoma is a surgical endpoint that diverts the bowel toward the abdominal wall. An ostomy bag is connected to the stoma to collect waste. The patient wears the bag at all times, usually with great discomfort. Often, waste leaks onto the skin, causing infection and sores. Other common problems include ulcers, bruising and even pressure sores on the skin surrounding the stoma.

The worst part is that when there is waste at the stomal opening of the colon, it moves automatically into the bag, which must then be removed and cleaned. For many patients, this complete lack of control is the ultimate insult, frequently causing chronic depression. While a stoma is a life-saver for people who would otherwise have no way of evacuating their bowels, it damages their dignity.

Giving back control over bodily functions

This is exactly the problem Stimatix GI aimed to solve. The company’s artificial sphincter, the trademarked AOS-1000, allows patients with a stoma to schedule their evacuations when they choose, giving them back control over their vital bodily functions.

“Our artificial sphincter is currently the best alternative for stoma patients,” says Hanuka. “The current solution uses a bulky adherent bag that always needs to be attached and requires a significant change in lifestyle, which causes a negative impact on patients’ self-image and causes severe skin rashes as well as other complications.

“With the Stimatix GI solution, patients can completely close off the stoma, avoiding elimination until it is convenient for them,” continues Hanuka. “Instead of tailoring their activities to the convenience of their bowel, they can basically do all activities – shopping, swimming, or just about anything else – without having to worry about an ‘incident.'”

The device consists of two components – an anchor port that requires no surgical intervention or any other modification to the existing stoma, and a patented cap that the patient can open or close. It’s low-profile — no bigger than a patch — and has a mechanical sensory alert that indicates when the patient should evacuate.

Clinical trials in a growing market

“We’ve been working on this concept for the last 20 months and a couple of months ago we wrapped up a major pre-clinical study using pigs as a model. In this study, we clearly demonstrated that the product is safe and efficient.”

The company expects to start clinical trials later this year, says Hanuka, “and we have been inundated with requests by patients who want to be included in the trials.”

Hanuka has a rich background in medical devices and is a former vice president of R&D with Vision Sciences, a US medical device company.

“I’ve developed and brought to market more than 10 minimally invasive medical devices, but this is probably one of the most challenging and important I have ever worked on,” he says.

Stimatix GI, founded in June 2009 and employing a staff of fewer than 10, is a portfolio company of the Trendlines Group’s Misgav Venture Accelerator. The company is aiming for FDA approval by mid-2012, and is working on closing a funding round.

The potential market for the Stimatix GI artificial sphincter is about $2 billion and grows about four percent each year as the “baby boom” generation heads into old age. Hanuka believes that at a minimum, Stimatix GI could grab up to 15% of the market within the first few years of commercialization.

“But I have a feeling we will do much better,” Hanuka predicts. “This isn’t just about making life more convenient. In a sense, it’s about giving people their lives back.”