A week before Hanukkah, ISRAEL21c toured the workshops of Yad LaKashish-Lifelinefor the Old, where many of the 300 elderly Jerusalem artisans were crafting this year’s line of holiday-related items for the hordes of local and foreign visitors streaming through the gift shop.

Thin metal was carefully being sawed from a pattern to make one type of hanukkiyah, the special nine-branched Hanukkah candelabrum (menorah), and from another pattern to make a dreidel – the spinning top known in Hebrew as sevivon. Colorful little tops were being fashioned from recycled paper, some of it provided by a Christian group that puts prayer notes in the Western Wall and then, after the notes are cleared to make room for new requests, shreds the paper and donates it to Yad LaKashish for meaningful repurposing. 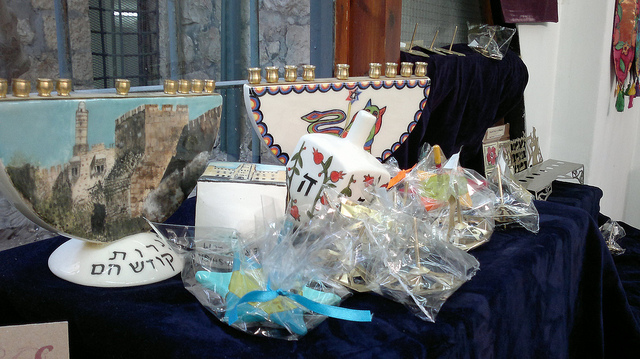 The average age of the workers at this unique social project is 78; the oldest is 93. Some are capable only of cutting paper or pushing clay into ceramic molds. Others do more intricate work, such as painting or embroidering, woodworking, knitting or sewing, glazing pottery or making new paper from recycled pulp for a variety of products. All receive the same stipend, a free public transportation pass, dental coverage, a daily snack and hot meal before going home in the early afternoon.

“What we give them fills in the gaps from welfare but doesn’t make them feel they are getting charity,” says Chava Brown, a guide at Yad LaKashish, which was founded by a schoolteacher in 1962 as a small bookbindery to employ eight elderly indigent men.

“They are making things that people buy, and they’re getting paid, just like in a regular workplace,” says Brown. “But as a non-profit, our main purpose is not to put them to work but to allow disadvantaged seniors to remain active, productive members of society for as long as possible. We focus on each person’s ability — what they can still do – to make an item that will really be used and they can feel proud about.” 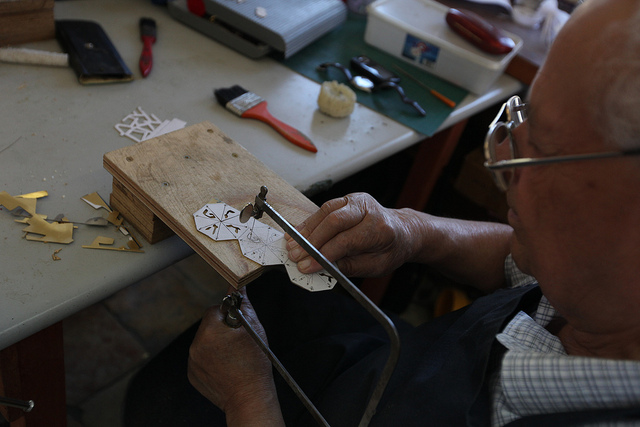 Sawing the metal for a dreidel. Photo courtesy of Yad LaKashish

The artisans mainly are immigrants from the former Soviet Union or Ethiopia with little financial or familial support in Israel.

They were not crafters in their younger days; they learn the skills on site from instructors who are graduates of Israel’s art schools, including the renowned Bezalel Academy of Art and Design in Jerusalem. Sixty percent are female, and half of them live alone.

Executive Director Nava Ein-Mor tells ISRAEL21c that the Hanukkah items on sale in the gift shop and online – about 15 types of dreidels and several styles of hanukkiyot — are not necessarily the same as last year. Products are always changing based on what sells, what customers are looking for, and what visitors, instructors and the artisans themselves suggest. Another consideration is how many workers can have a hand in each product. 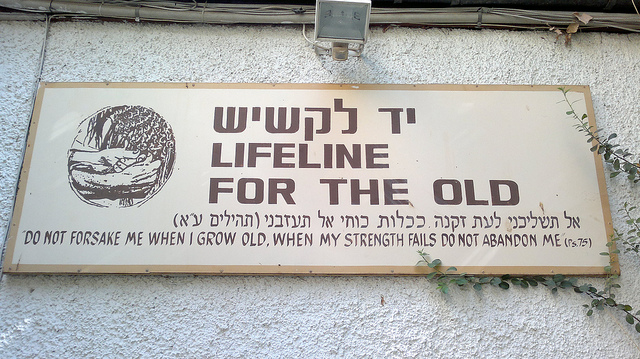 The organization was founded in 1962. Photo by Abigail Klein Leichman

“We try to come up with items that give work to as many people as possible,” explains Ein-Mor. “For example, to produce beads of recycled paper, one person makes the paper, somebody else makes the beads, somebody else paints the beads, and then someone puts the lacquer on the beads. So by the time it becomes a finished bead, several people have worked on it.”

This is one reason, she adds, that Yad LaKashish does not sell candles or soaps. Aside from concerns about the very hot materials used in producing these gift items, normally only one artisan is involved in the creative process. “People come here expecting to do something, and if they have nothing to do it’s not worth them coming.”

Brown and her coworkers take one group of visitors after another to see the works in progress. Yad LaKashish is on the itinerary of Jewish and Christian tourists of all ages and persuasions. On the day ISRAEL21c visited, Brown led around kids from the Alexander Muss High School (a non-denominational, English-language study-abroad program in Israel), a tour group from China and a contingent from Bridges for Peace Australia. It’s not unusual to see a Taglit-Birthright coach bus parked in front of the complex, just across from the Jerusalem municipality.

People love photographing the elder craftsmen in the various workshops, but are gently reminded to ask permission first. One bead-maker not only agreed happily, but wrote out her email address so that her Australian admirer could send her the picture afterward.

If you aren’t in Jerusalem, you can still take advantage of the pre-Hanukkah sale of Yad LaKashish sevivonim and hanukkiyot. For more information, click here.