If all goes as planned, within two years Israelis will be the first people to try out a futuristic rapid transport system designed by NASA’s Ames Research Center in Silicon Valley, California.

The skyTran uses two-person modules that drive along a guide rail suspended from existing power lines. Magnets in the vehicle create a magnetic field around the metal coil inside the rail, causing the vehicle to lift up and glide 60 miles per hour on a cushion of air. The system uses very little energy and potentially could be powered entirely by solar panels.

“Our objective is to build a pilot project here so that we can make Israel the center of the skyTran world,” CEO Jerry Sanders tells ISRAEL21c.

The first route, on which construction could begin next spring, would run from the high-tech center in Atidim through the Tel Aviv University train station to the Tel Aviv-Jaffa Port. Another installation might be placed on Netanya’s congested east side and a third would take people into and around Ariel Sharon Park, a huge public “green belt” in central Israel.

Personal rapid transit (PRT) alternatives are in hot demand worldwide – especially in big countries such as China and India — as a means to relieve traffic jams and energy consumption. Underground solutions are expensive and street-level solutions just add more congestion.

“We are the most sophisticated PRT on the market … and also the least expensive, greenest and most efficient,” asserts Sanders.

The best of mass and personal transport

The space-age skyTran combines aspects of public and private transportation.

With skyTran, riders order a vehicle by tapping an icon on their smartphone. Once inside the pod, the passenger chooses a destination from an on-board console. 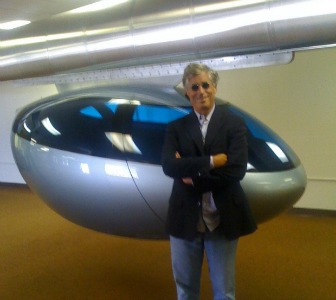 The vehicles, which provide full Internet access, can be owned by individuals, by companies as a fleet to pick up workers, and by municipalities – all running together at the same time. Traffic control is accomplished through a sophisticated computer program.

The cost of implementing skyTran is estimated at $9 million per mile, as opposed to $100 million per mile for a light rail system and $20 million per lane for buses. The fare will probably be competitive with Tel Aviv’s sherut (taxi van) service, says Sanders. And maintenance costs would be remarkably low.

“The vehicles don’t encounter resistance like wheel-based systems do, so there is no wear and tear from wheels hitting pavement or track,” says Sanders. “When the vehicle comes to a station, it rests on little rollerblade wheels.”

Israel is the perfect beta site

A former Wall Street lawyer and serial entrepreneur who teaches a graduate business seminar at Oxford University, Sanders was contacted by NASA to provide direction to the Ames engineering group that had pioneered the skyTran concept.

“They showed me the technology and I fell in love with it, so they appointed me chairman and CEO two years ago,” says Sanders, a Silicon Valley resident.

“As I learned more about the technology and opportunities, it became clear Israel would be the perfect beta site because it has a very sophisticated population with no fear of technology, and great pain suffered every morning and evening when they hit the roads.”

Sanders has found that Israel’s bureaucracy “is not as onerous as in some other Western countries. It’s a ‘two-telephone call’ country. Once the government knows about something and is interested in it, they find a way to clear the bureaucratic hurdles and that is what is going on with us.”

When he predicts that Israel will become the center of the skyTran world, he is not only talking about passengers. While right now the modules and support poles are mass-produced in the same Austrian factory that manufactures aluminum parts for Mercedes-Benz, Sanders believes they could be made in Israel. In addition, the job of continuously upgrading the programming could be done by Israeli software engineers.

“Right now Ames is the headquarters for the company, but if and when we start a pilot in Israel, without a doubt we will train and qualify many local engineers and blue-collar workers working with local companies. Israel will become a base of knowledge for the skyTran system and if the first is system built here, people will come from all over to learn about it,” Sanders says.