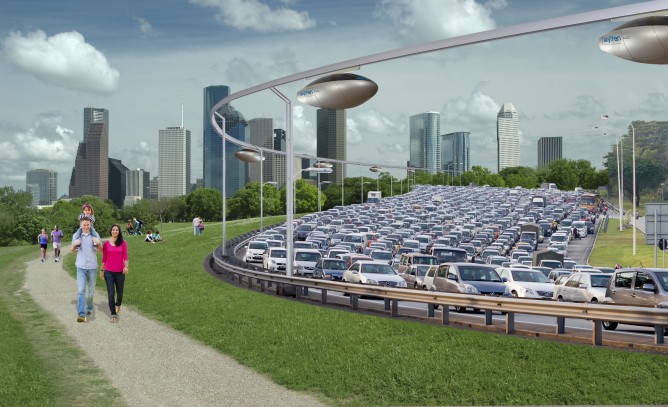 The skyTran system will soar above cars stuck in traffic.

After reports citing Tel Aviv as the first testing ground for the futuristic aerial cable car pilot, the Herzliya Municipality recently announced its collaboration with the SkyTran company for the country’s first rapid transport system.

“Right now we are talking about a vision, a dream, and we want to make it a reality. There are other processes and objections, and we are only at the planning stage,” Herzliya Municipality Spokesperson Dorit Basman told Geektime.

With congestion a major problem in major cities everywhere, this futuristic space-like gliding vehicle could be the solution to traffic issues.

According to the Geektime report, the pilot route would run from the industrial area between the Herzliya train station and the marina. It is said to be able to transport 12,000 people every hour.

Moreover, the transit system – although not yet a reality – has been dubbed environmentally friendly because it uses little energy and could eventually be powered by solar panels.

UNCOVER ISRAEL - Get the ISRAEL21c
Weekly Edition free by email
Sign Up Now!
Bring Israel's story to life.
Millions of people around the world rely on us to gain a deeper understanding of Israel. We are the trusted source for original content you won't find anywhere else.
You can make a difference. Donate today to support journalism that brings Israel’s story alive.
SUPPORT ISRAEL21c
Read more on:   News, SkyTran