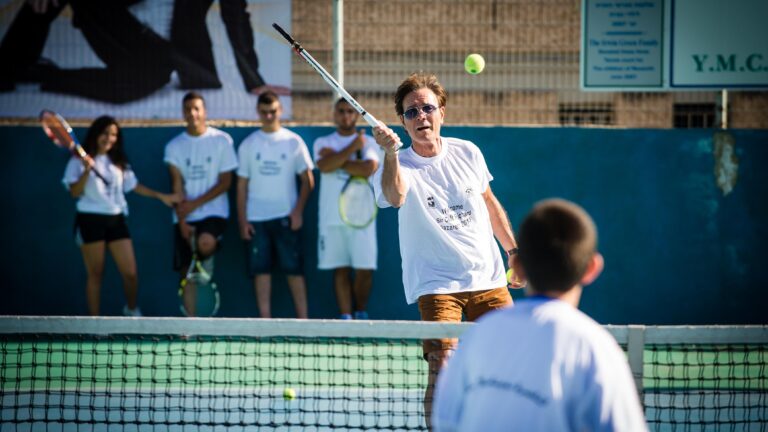 British pop star Sir Cliff Richard will take center stage at Tel Aviv’s Nokia Arena (July 11 and 13) for two sold-out concerts but before he belts out his hits, the musician-philanthropist made a stopover at the Nazareth Tennis School to see the academy he helped establish.

An avid tennis fan and player, Sir Cliff donated funds in 2005 to help the Freddie Krivine Foundation refurbish courts for Israeli Arab and Jewish youth at the Nazareth Tennis School, located in the grounds of the Nazareth YMCA.

“When I first heard about the Freddie Krivine Foundation and its aim to bring Israeli Jewish and Arab children together, I needed no persuasion to be involved. Building bridges between communities is always admirable. To do so via my favorite sport, tennis, was just a perfect concept for me,” he said. “Arab and Jewish children playing sport together with all that means in terms of healthy competition, confidence and camaraderie can only sow good seeds for the future.”

Director of the Freddie Krivine Foundation,Jane Krivine, said: “Sir Cliff’s visit to the Nazareth Tennis Center, just days after the Wimbledon Championships, is the highlight of the tennis year for the 200 Arab children at the school. My late father, a former President of the Israel Tennis Association, established the foundation 15 years ago to promote co-existence and equal opportunity in Israel through tennis. Today, we have eight tennis schools in the Israeli Arab sector around the country, a co-existence tennis school in Beit Hananya and many tennis programs and tournaments that bring together Israeli Arab and Jewish youth. And with many of our graduates now working as tennis coaches, we are offering employment as well as empowerment.”