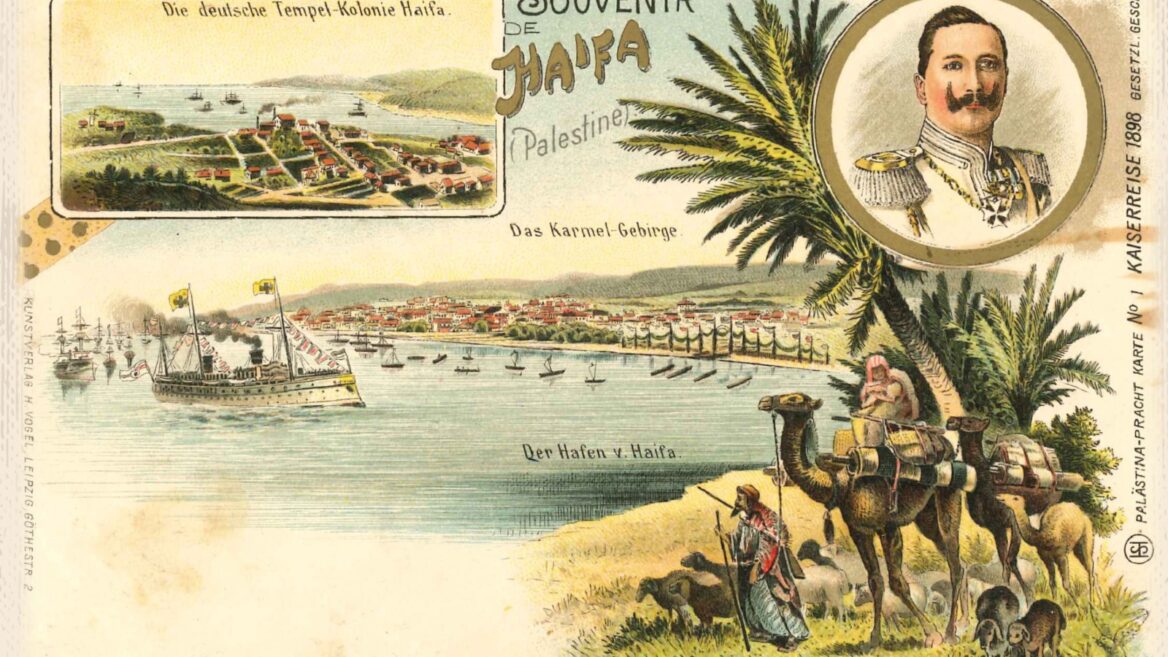 This pastoral postcard from Haifa is from 1898. Image courtesy of Hebrew University

Ever wonder what first impressions Kaiser Wilhelm II might have tweeted upon his arrival in Jerusalem in October 1898? Or what Instagram and WhatsApp messages British soldiers in Palestine during World War I would have sent?

Long before the era of instantaneous communication, postcards served as the primary way to keep in touch, send pictures, collect souvenirs and share experiences with family and friends faraway. 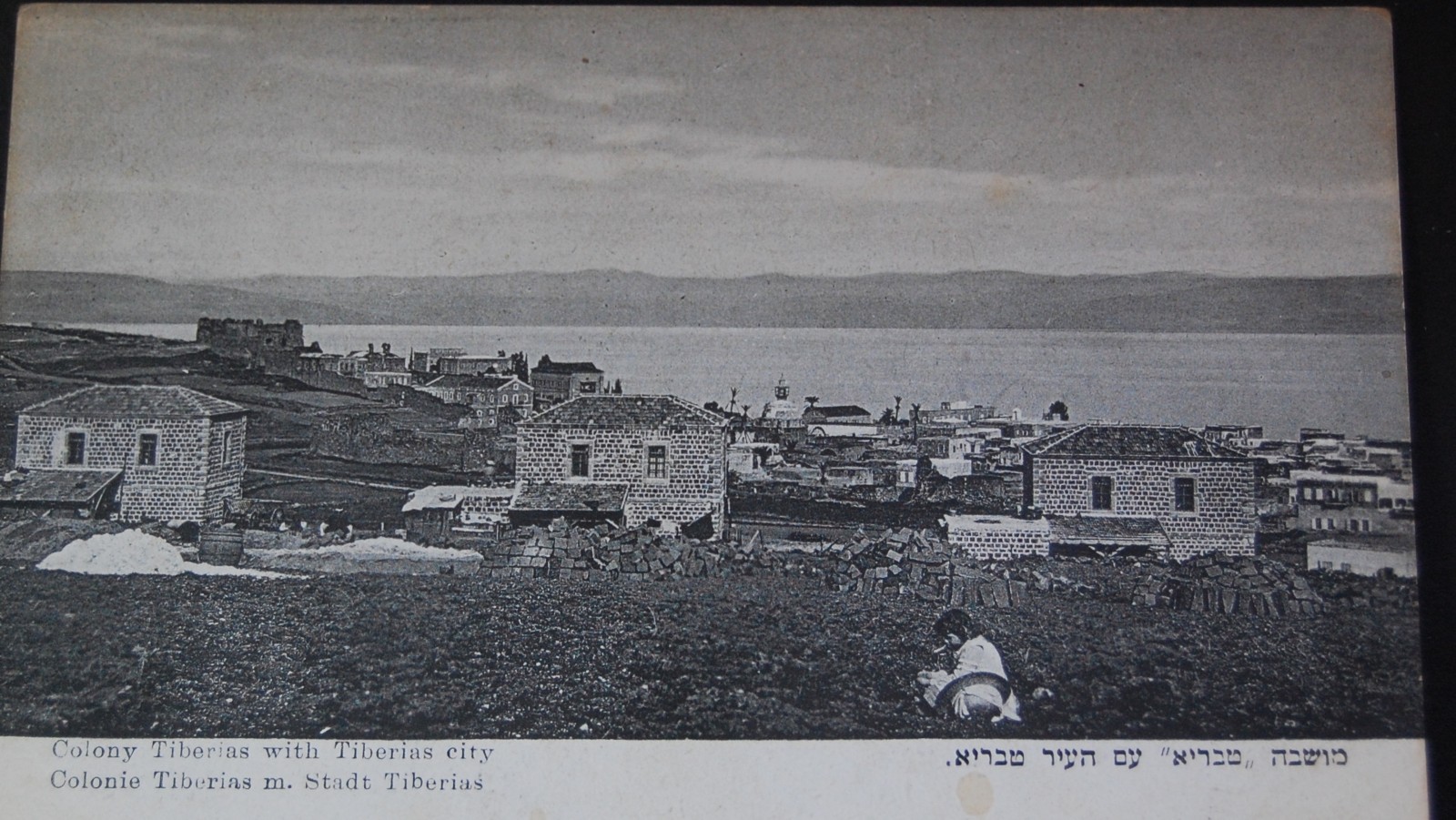 An old postcard from Tiberias. Image courtesy of Hebrew University

Now he is donating all 130,000 of them to the Folklore Research Center at the Hebrew University of Jerusalem’s Mandel Institute of Jewish Studies. 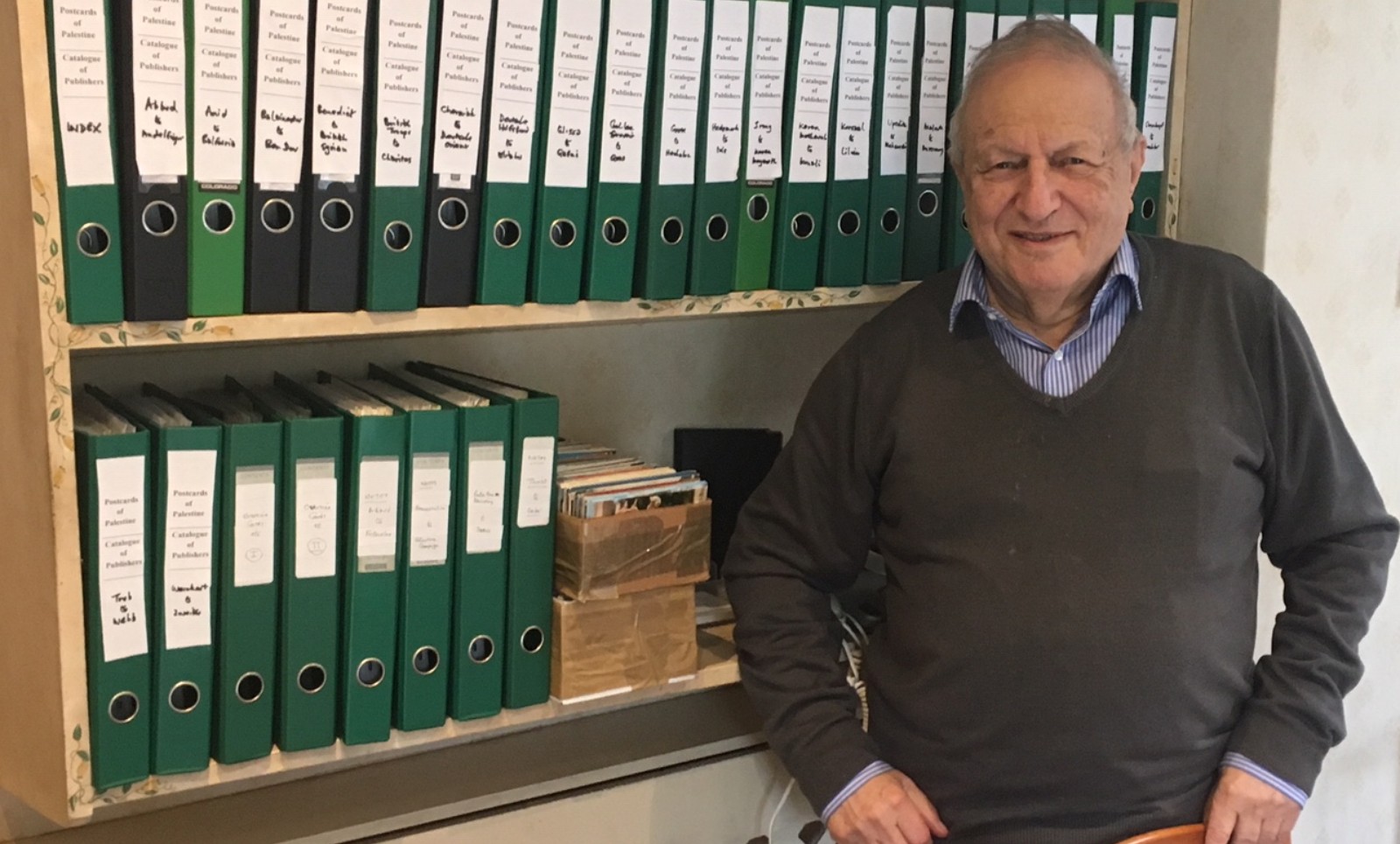 “I began collecting stamps as a young boy and graduated to postcards when I realized that instead of collecting dull postage stamps, I could collect these beautiful cards,” Pearlman recalled.

He scoured auction houses, private collections and estate sales to piece together his “Postcards of Palestine” collection. 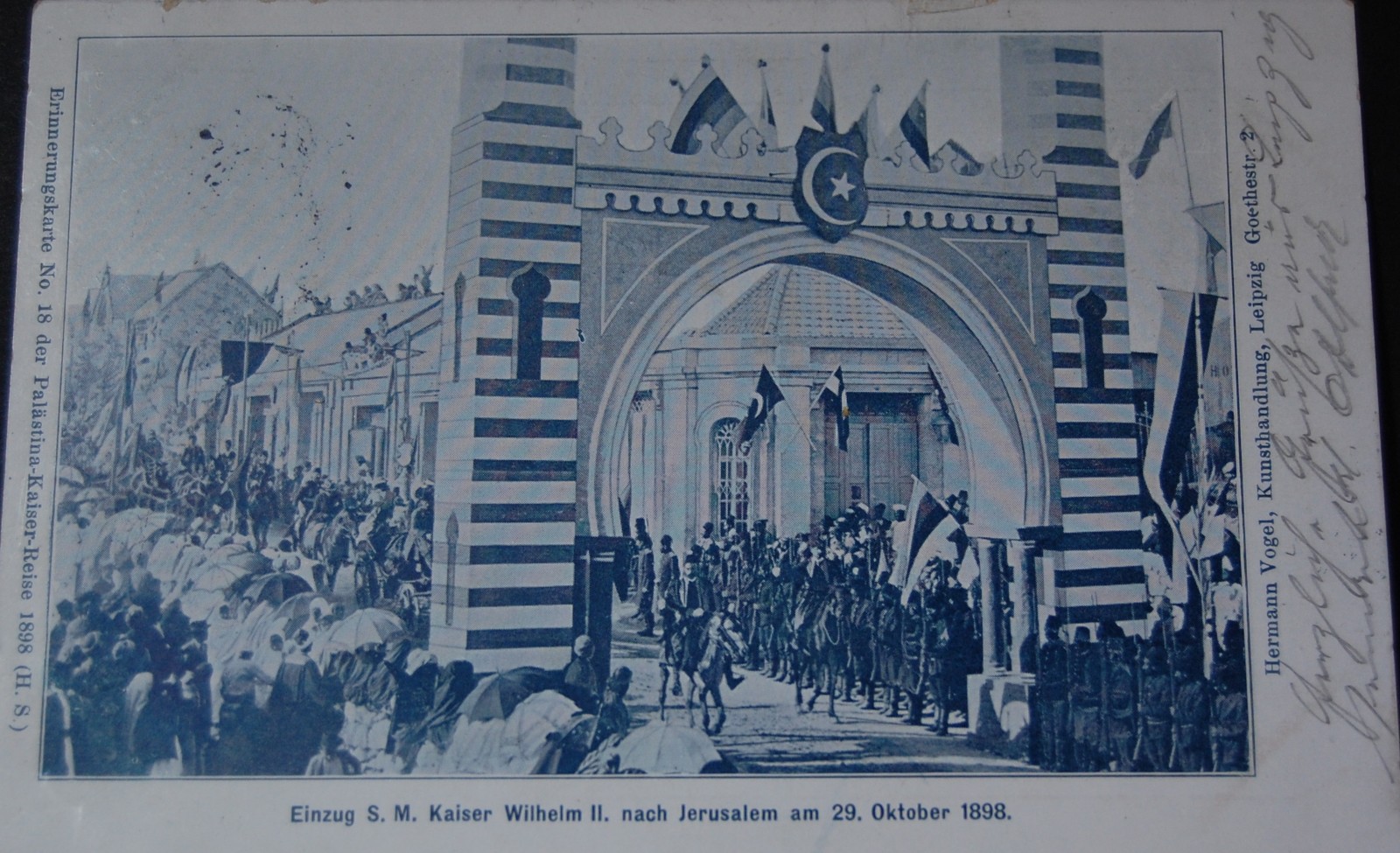 The cards span from the Ottoman Period and British Mandate to the early pioneers, from the Six-Day War through the early 21st century.

Among pivotal events pictured on the cards are General Allenby’s visit to Jerusalem in 1917 and Lord Balfour’s attendance at the grand opening of Hebrew University in 1925. 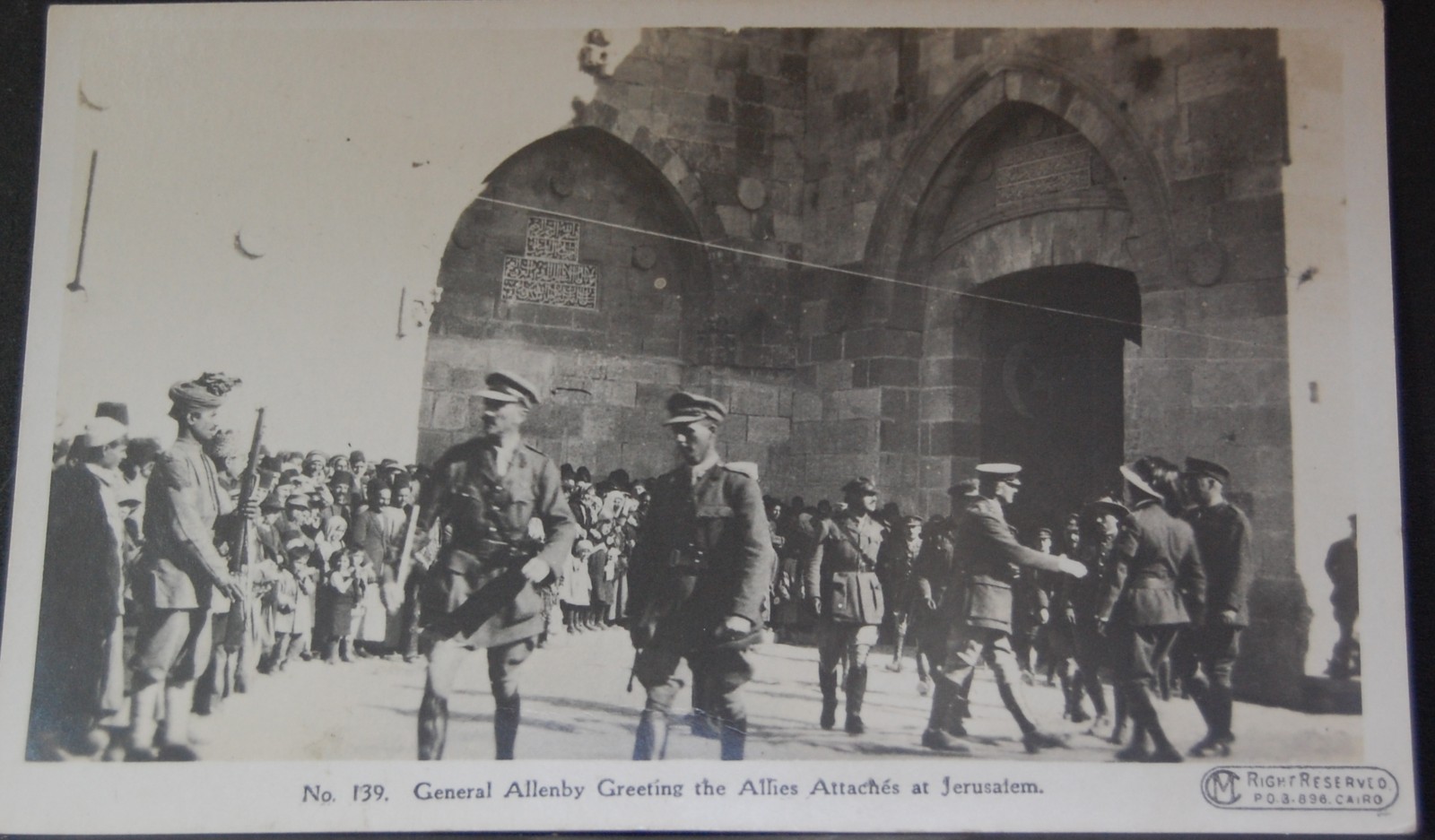 Some of the cards feature artwork by leading 20th-century figures such as Meir Ben Gur Aryeh and Zeev Raban, as well as photography by “Karimeh Abbud – Lady Photographer,” one of the first female photographers in the Arab world.

A sizeable portion of the collection are postcards sent by Christian pilgrims traveling from Egypt to Jerusalem to Damascus, visiting the holy sites along the way and sending their loved ones postcards that depicted camels, palm trees, Bedouins, pious Jews and an overflowing Dead Sea. They often included pressed flowers or scriptural quotes. 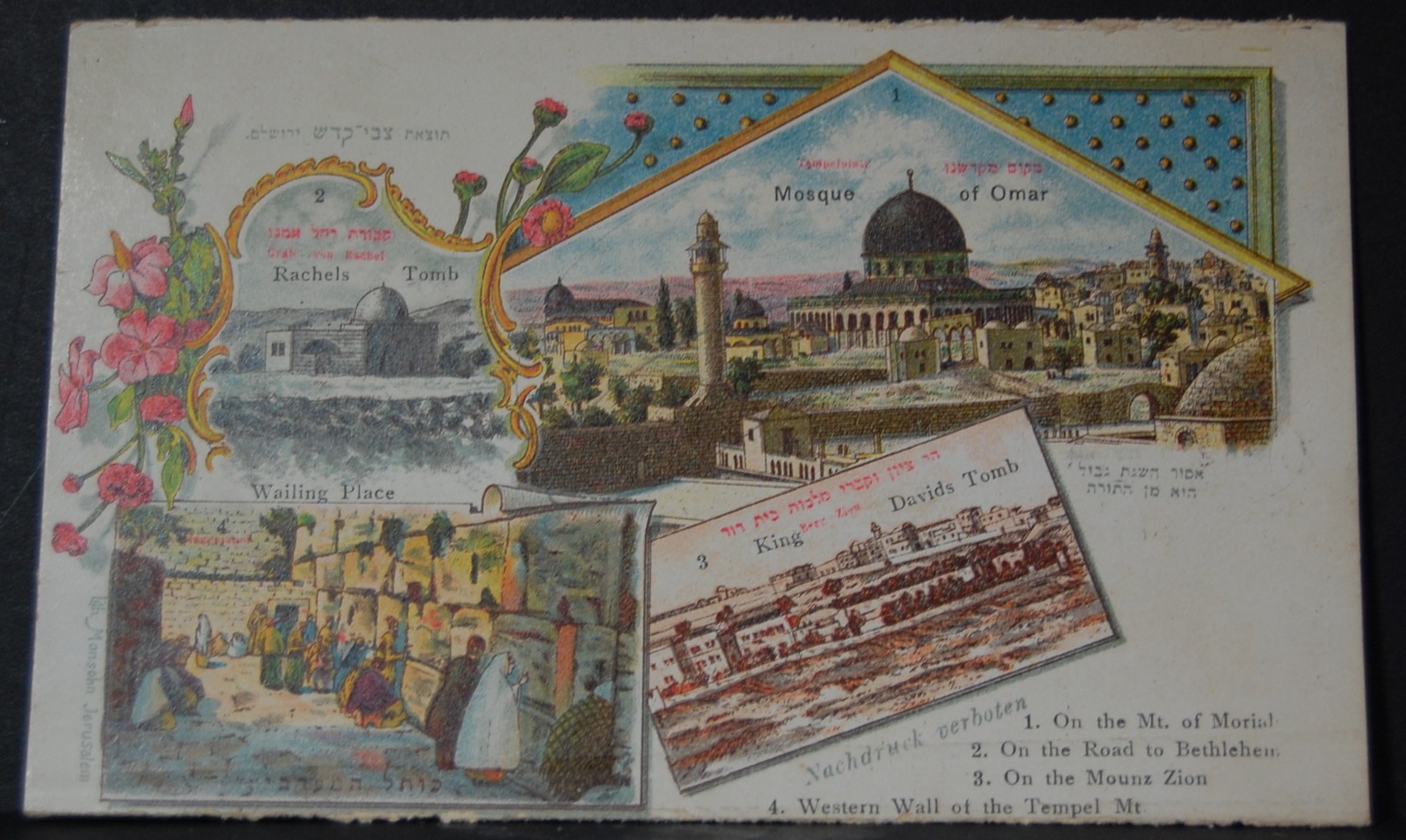 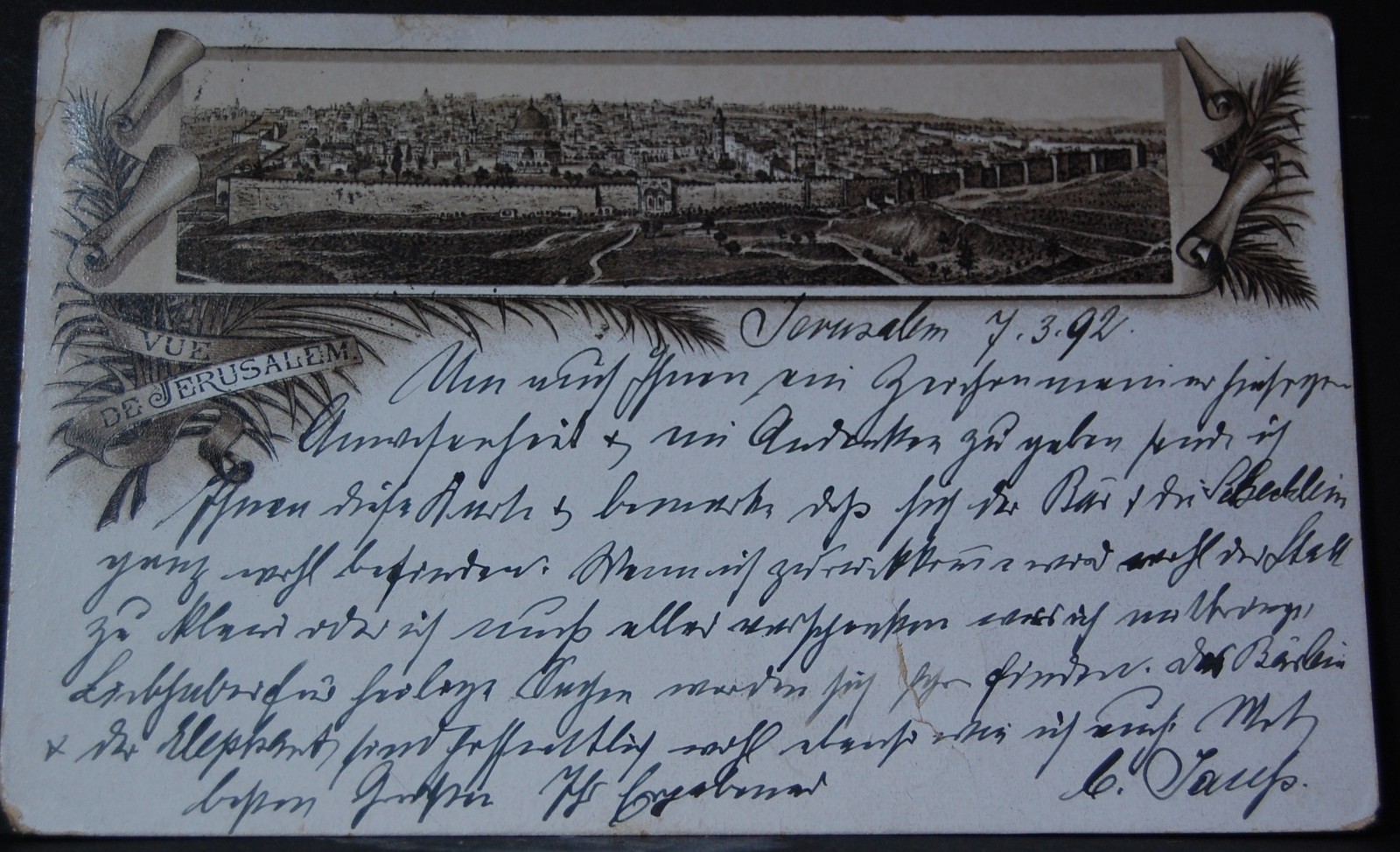 A postcard sent from Palestine in 1892. Image courtesy of Hebrew University

Dani Schrire, director of the Folklore Research Center, said a classic message would read, “Yesterday we were in Bethlehem. Today we’re in Jerusalem. Tomorrow we’re going to Nazareth. It’s so hot here!” 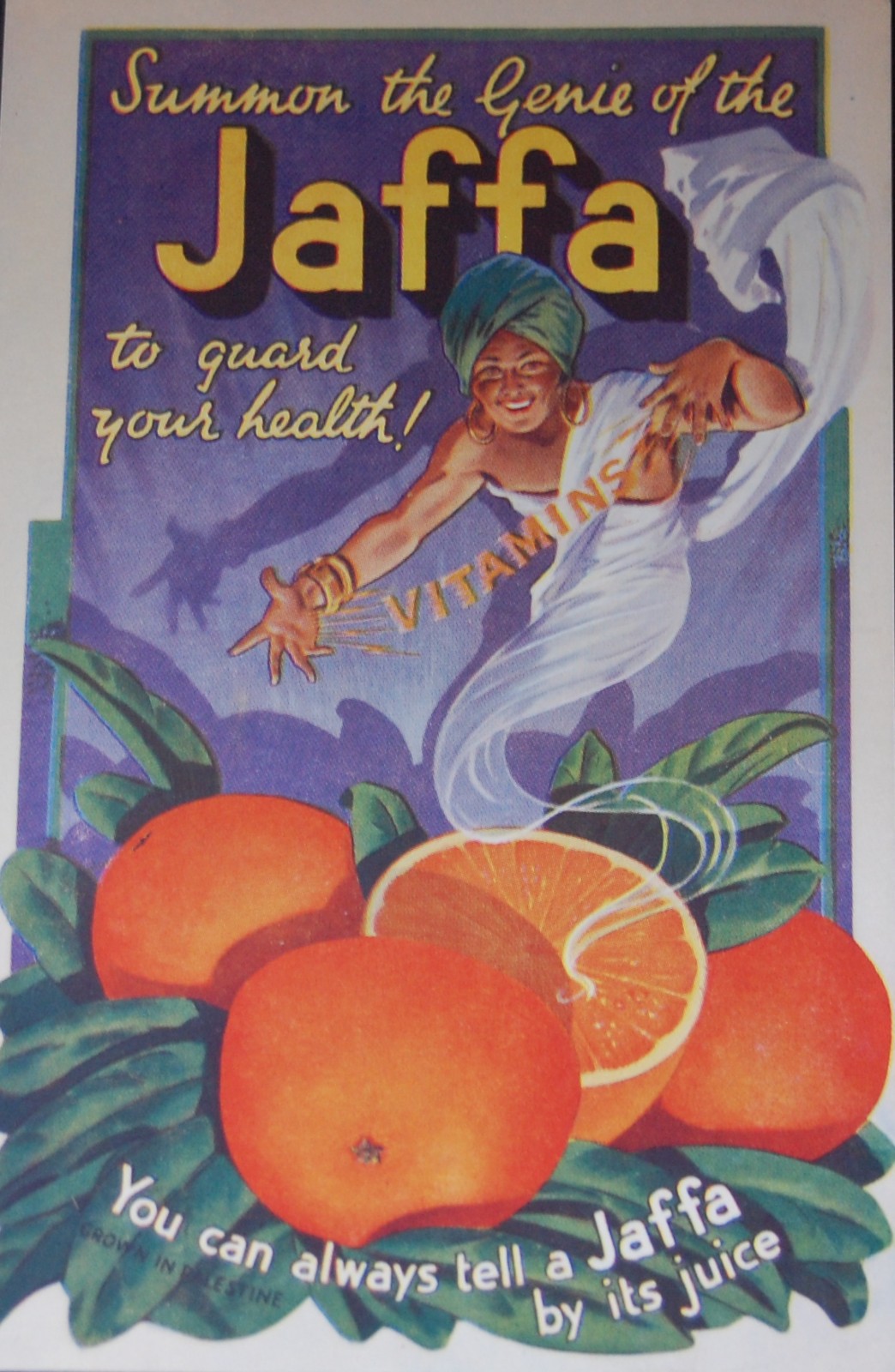 Jaffa oranges are featured in this old postcard.Image courtesy of Hebrew University

In one postcard, a British soldier named Walter writes to his parents, “I can say ‘mafish’ which means ‘enough’[in Arabic’]…and I hope the war will soon [end] so I can go home again.”

Another soldier wrote, “I came through here…between Mt Ebal and Mt Grizim. … It is of course the Shechem where Jacob fed his flocks and Jacob’s well is here. There are many springs and consequently gardens where I saw the first green I’d seen for months.”

One British soldier mailed his parents a postcard of the Sea of Galilee, which he described to his parents as “The lake which saw so much of His life on earth and which to my mind holds such fascination.”

His message also noted, “The man in the next bed was up there with the cavalry says it’s very fine, the water being beautifully clean and there are several nice streams running into it. While there they were able to get fresh fish which was a nice change from the ‘bully [beef].’”

Another postcard shows a Hasidic Jew choosing an etrog for the Sukkot holiday in the Ottoman period. 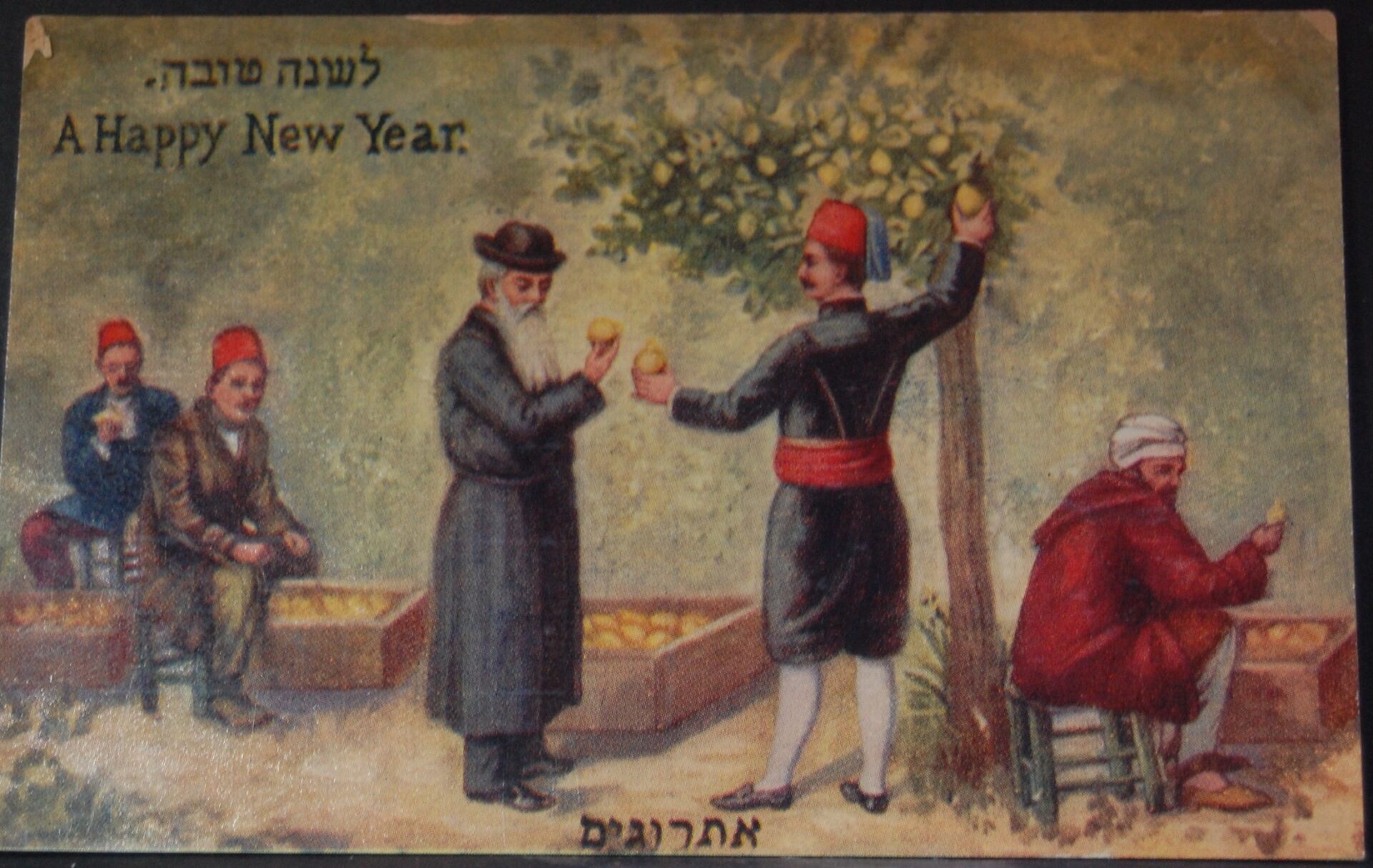 Pearlman did extensive research on his postcards and provided HU researchers with valuable annotations and a complete catalogue of his collection, which includes 1,500 postcard publishers. 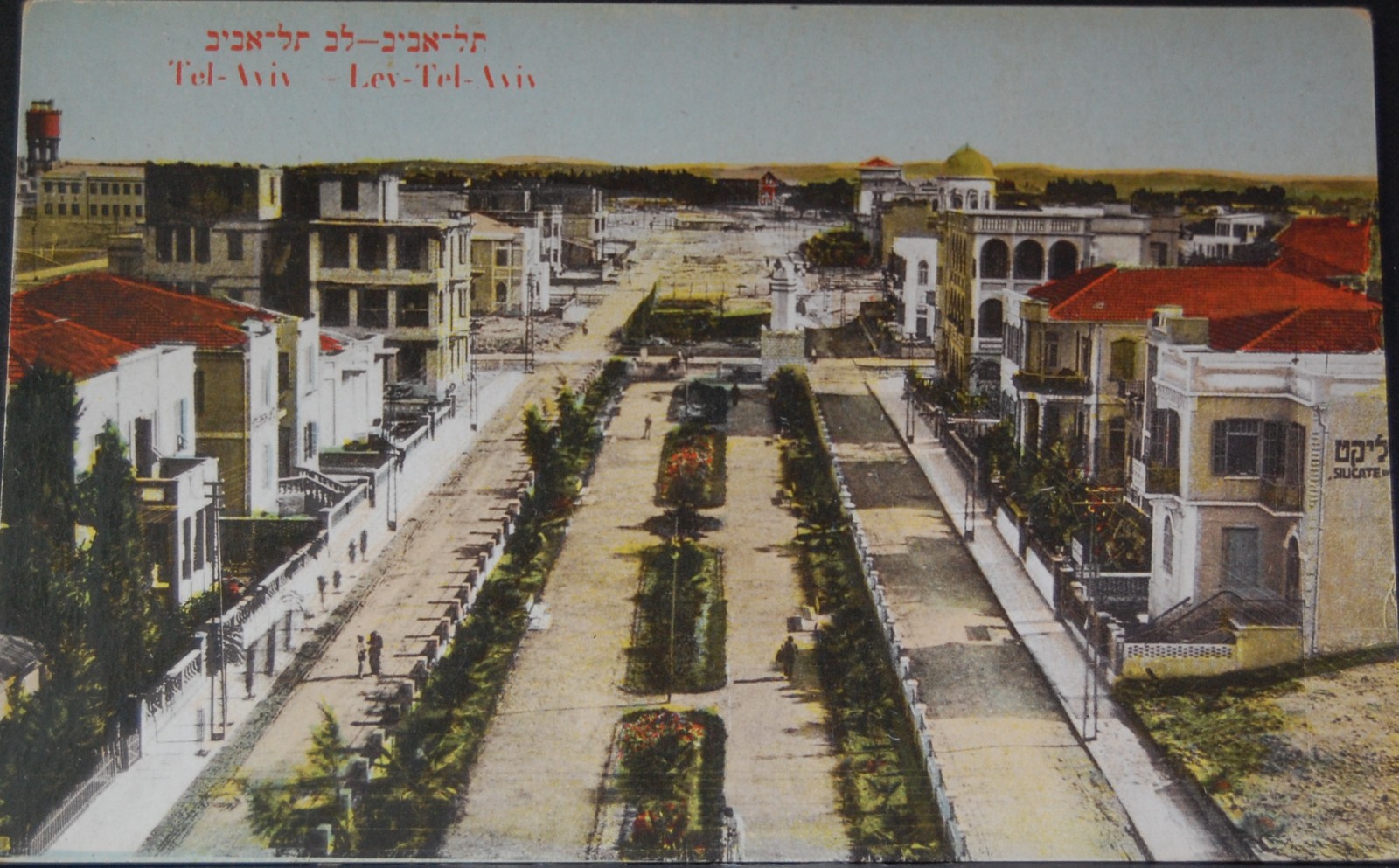 An old postcard of a boulevard in Tel Aviv. Image courtesy of Hebrew University

“In a way, Pearlman wanted these cards to return to Zion, to the Hebrew University of Jerusalem. Once a collection arrives, we bring in conservation specialists to preserve the collection to the highest standards,” said Schrire.

“And then the real fun begins–HU researchers, from a variety of disciplines, are excited to begin working on the collection and to understand the imagination that the Land of Israel had on its many visitors.” 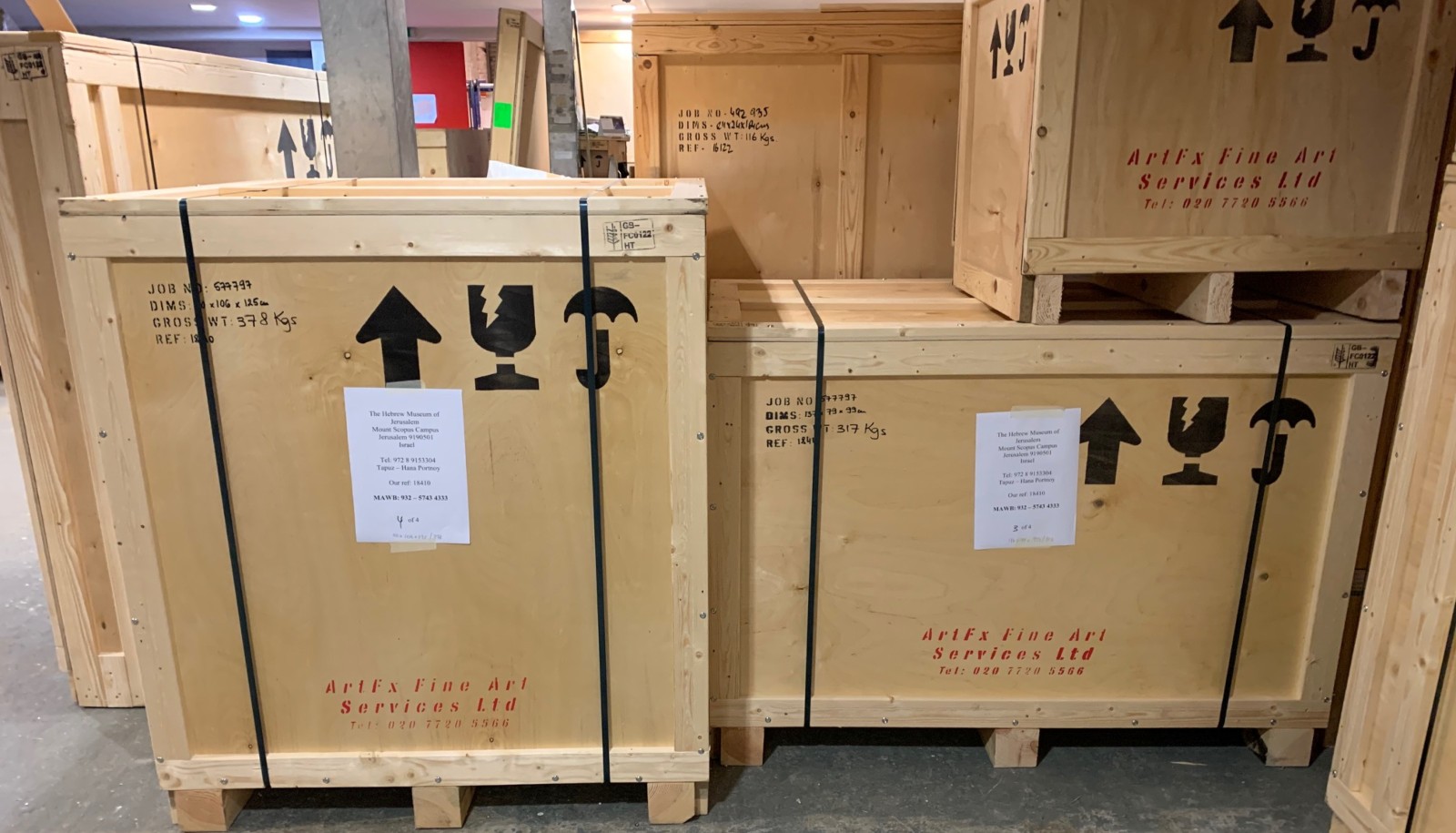 Pearlman said the collection “feels like part of my family.” But the time had come to part with them.

“I kept them in shoeboxes in my garage all these years,” Pearlman said. “At a certain point the collection grew so large that I began to park my car on the street to make room for more shoeboxes.” 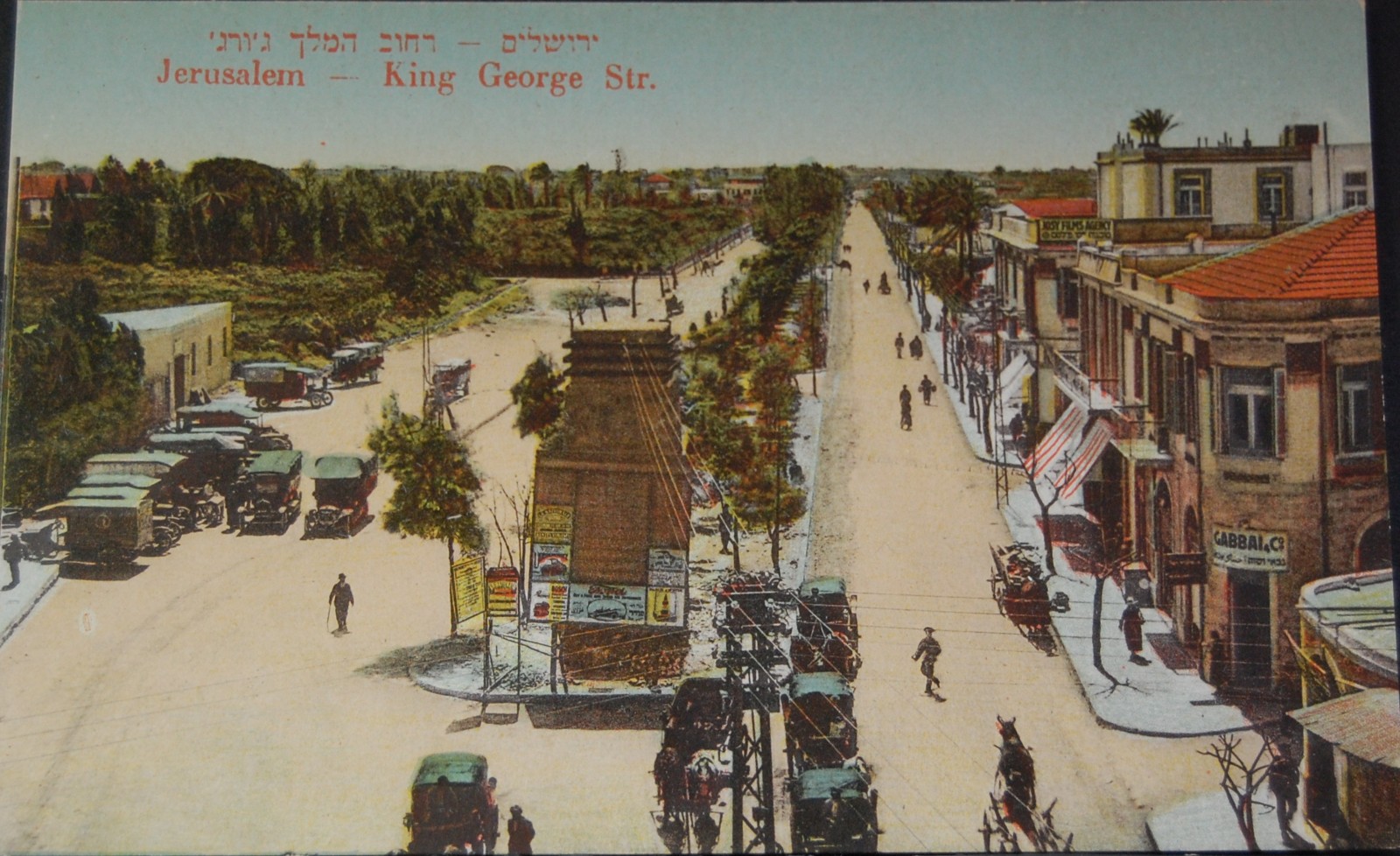 The Folklore Research Center at Hebrew University was established in 1970 by the late Professor Dov Noy and is home to several important collections, including The Joseph and Margit Hoffman Judaica Postcard Collection, The Ralph Perry Palestine Postcard Collection, The Israeli Proverb Research Project, The Documentation Project of Jewish Papercuts, the Wandering Jew Archive of Yom Tov Lewinsky, and the Ya’akov Zidkoni Collection of Jewish Humor in Mandatory Palestine and Israel, among others.