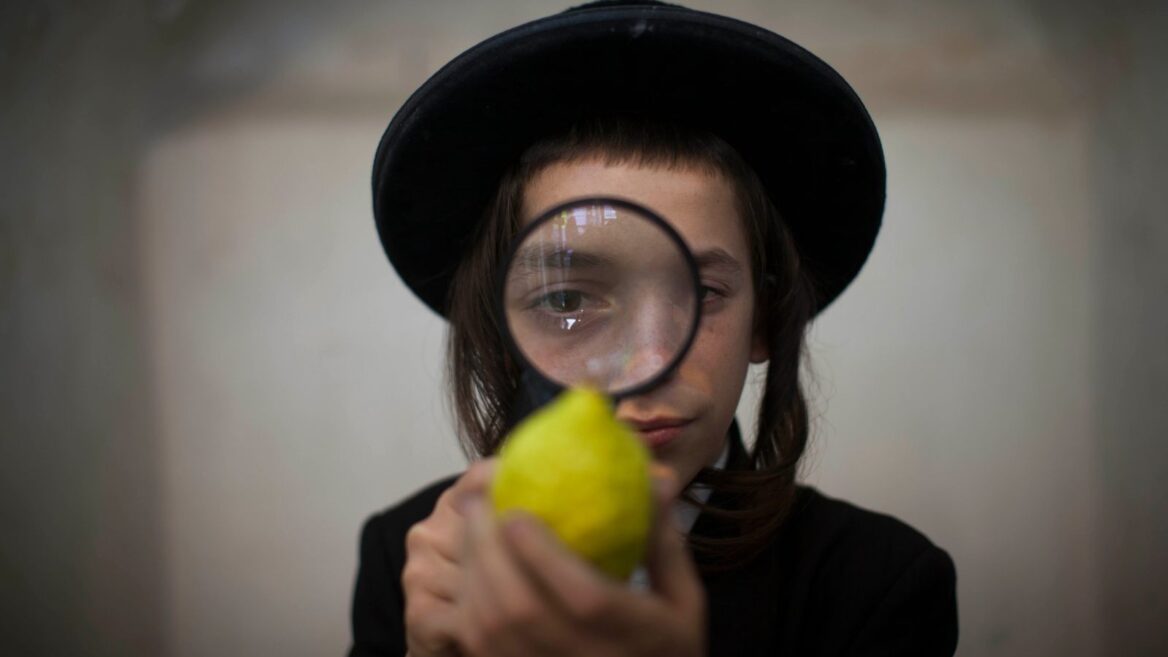 A boy inspects an etrog for blemishes. Photo by Yonatan Sindel/Flash90

Over here in Israel, Sukkot is the cherry on top of the never-ending High Holiday season. Not only does it not require fasting, repenting or staring at a fish head throughout dinner (we’re looking at you, Rosh Hashana!), it involves DIY decorations, camping on the balcony and getting a whole week off school.

Alongside its namesake sukkot, or temporary dwellings, the festival’s most recognized symbols are the four species: the etrog (citron), lulav (palm branch), hadas (myrtle) and aravah (willow) that are taken in hand or waved during some of the holiday prayers. 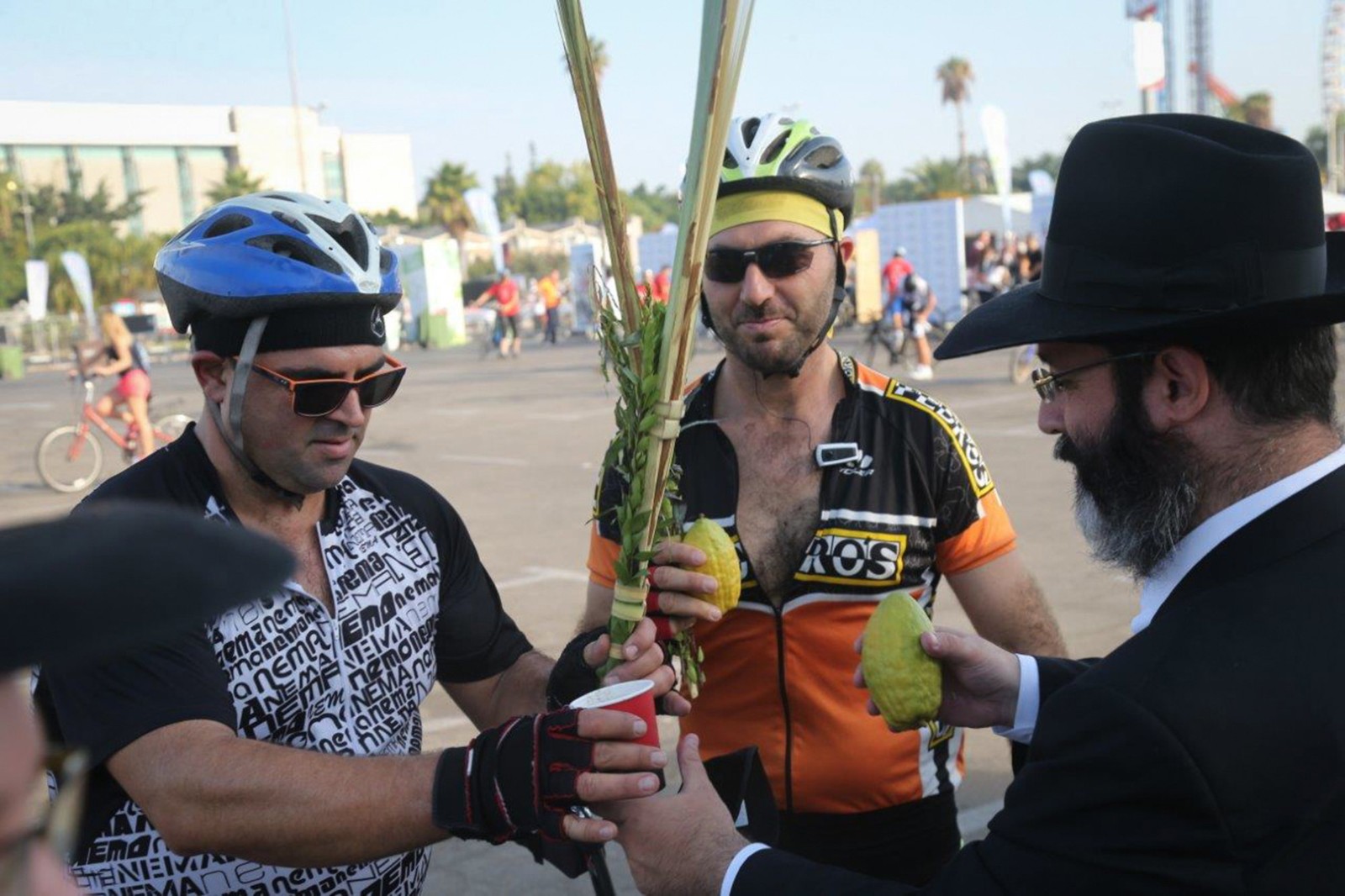 Of these, the etrog is perhaps the most famous and, dare we say it, the most interesting. How interesting? Scroll down below for some fabulously fun facts on that most precious of citrus fruit. 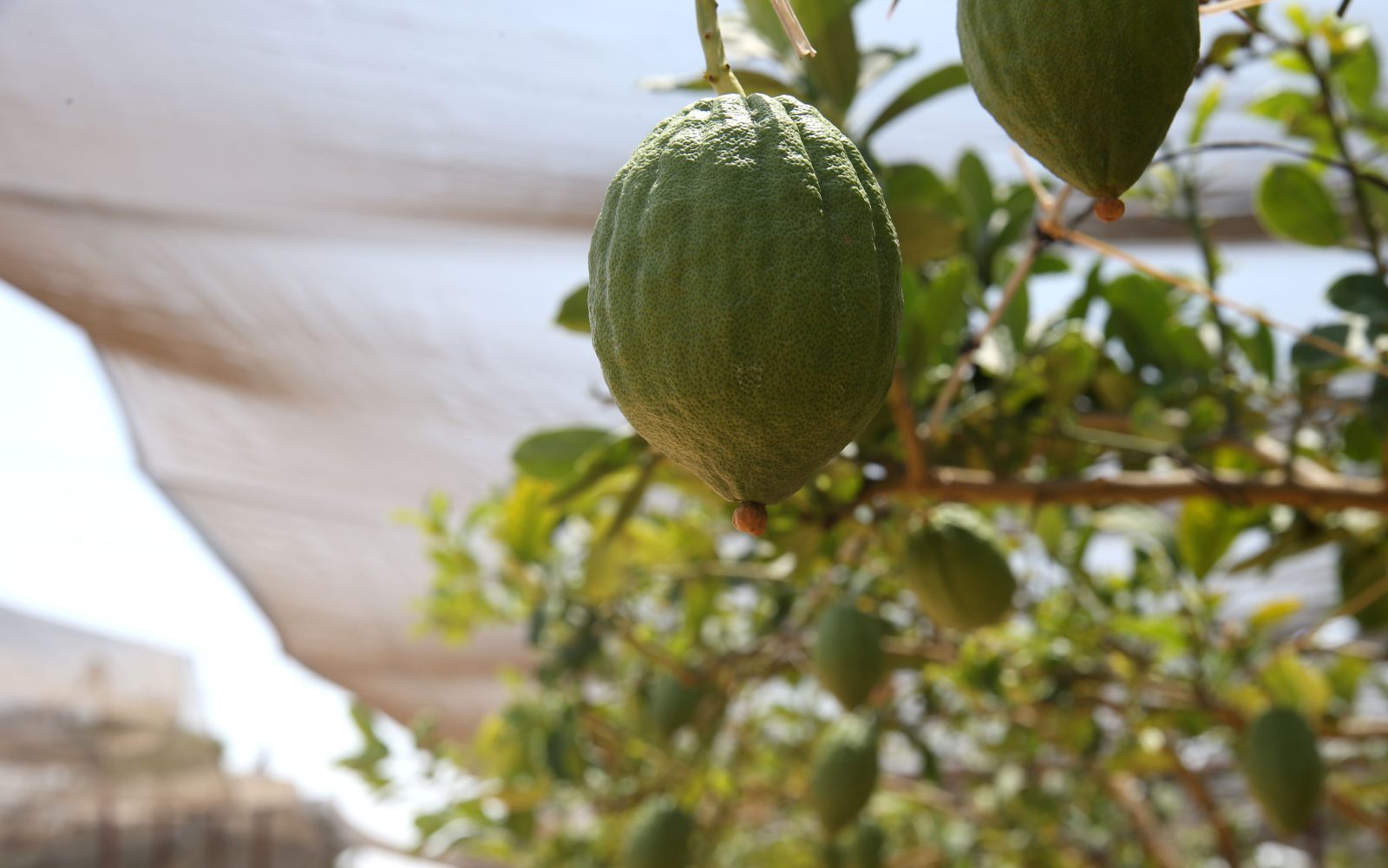 An etrog orchard in Kfar Chabad in central Israel. Photo by Nati Shohat/Flash90

The etrog’s scientific name is citrus medica, which alludes to its first mention in Western literature by Greek philosopher and botanist Theophrastus, who called it “Persian or Median apple.”

And yet, the etrog’s roots lie even further east, at the foothills of the Himalayas, from where it spread back to the Persian Gulf and the Mediterranean.

The etrog is one of the four “founding fathers” of all the citrus fruit in the world, alongside pomelo, mandarin and papedas (from which yuzu and kaffir lime are derived). That’s right. An etrog is not a type of lemon, but rather the other way around. 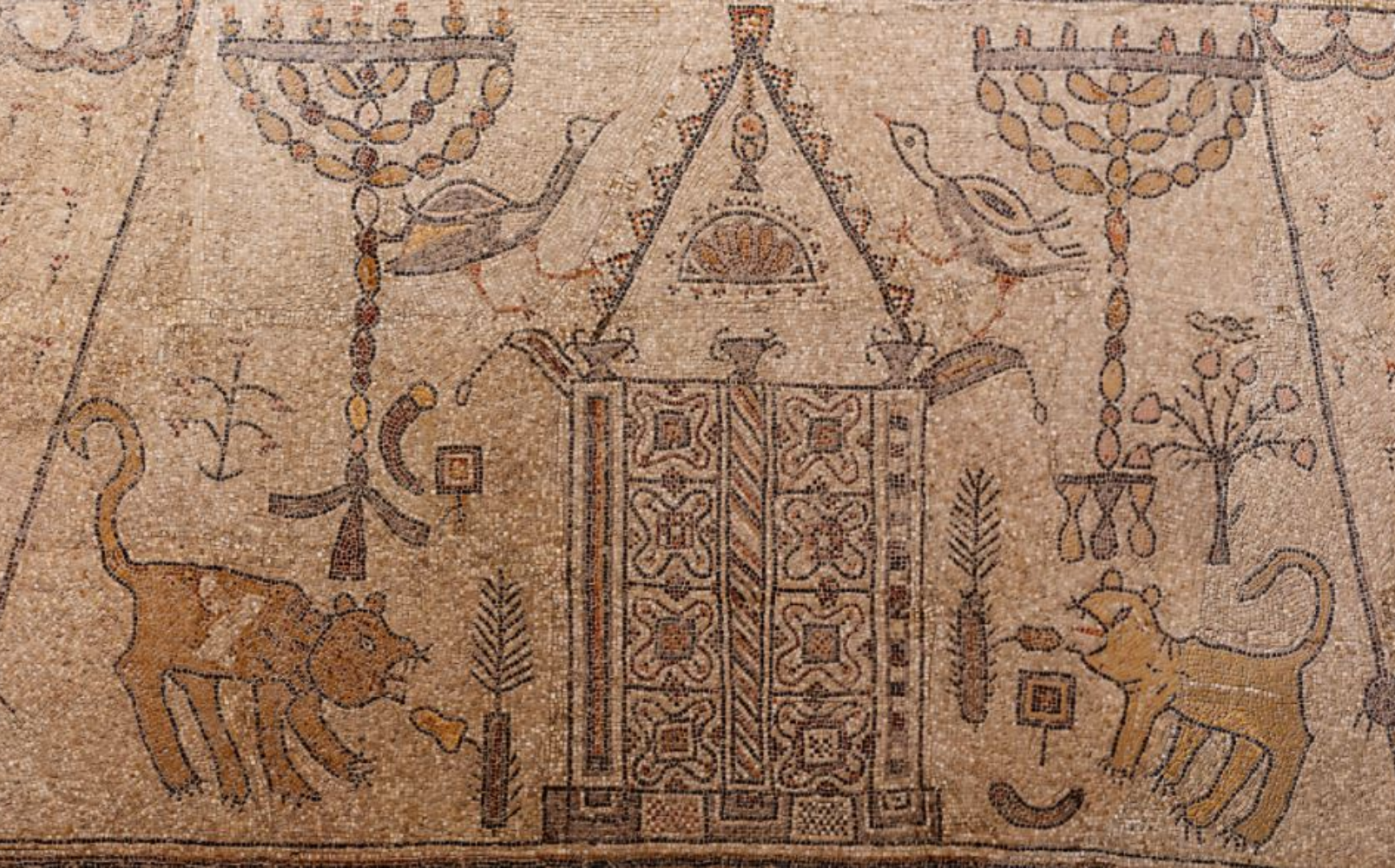 The mosaic at the ancient Beit Alpha Synagogue. Photo by Boaz Eshkol/Israel Nature and Parks Authority

The Jews weeping by the rivers of Babylon came across etrogim while in exile there (around 586 to 516 BCE) and brought them back to the Land of Israel when they returned to build the Second Temple. It became a symbol that adorned coins and synagogues. Mosaics depicting these fruits can be seen in the remains of the ancient Beit Alpha Synagogue and elsewhere.

Back in 2012, researchers discovered etrog pollen in an ancient garden belonging to a 2,500-year-old royal palace located in Ramat Rachel in southern Jerusalem.

The researchers didn’t find the pollen in the ground, but rather trapped inside the plaster used to coat a water pool. The fossil pollen that was discovered was used to identify the type of trees and plants that adorned the royal garden – among them etrog trees and the similarly non-indigenous cedar of Lebanon and Persian walnut tree.

The biblical commandment to wave the four species speaks not of etrogim, but of “the fruit of splendid trees.” While the identification of etrog as the required fruit was made later in the Talmud, the custom became deeply ingrained. The identification of the etrog with the commandment is even the source of the Hebrew word for citrus – hadar, or “splendid.”

For an etrog to be considered suitable for ritual use on Sukkot, it must comply with strict standards. First it must be a pure citron — not hybridized or grafted with any other species. Second, the knobby bit at the top of the fruit, called pitam, must either be complete or should have naturally shed during the growing process. If the whole pitam is unnaturally broken off, the etrog is no longer kosher. Needless to say, it also needs to be blemish-free. No wonder they’re kept safe in silky fibers and fancy boxes.

Seeing as the condition of the etrog and particularly its pitam is such a serious matter, it’s a good thing that science has managed to come to its rescue. An auxin, or plant hormone, developed by the Hebrew University of Jerusalem’s Prof. Eliezer E. Goldschmidt prevents the pitam from dropping off, no doubt saving many thousands of citrons from being thrown in the bin. 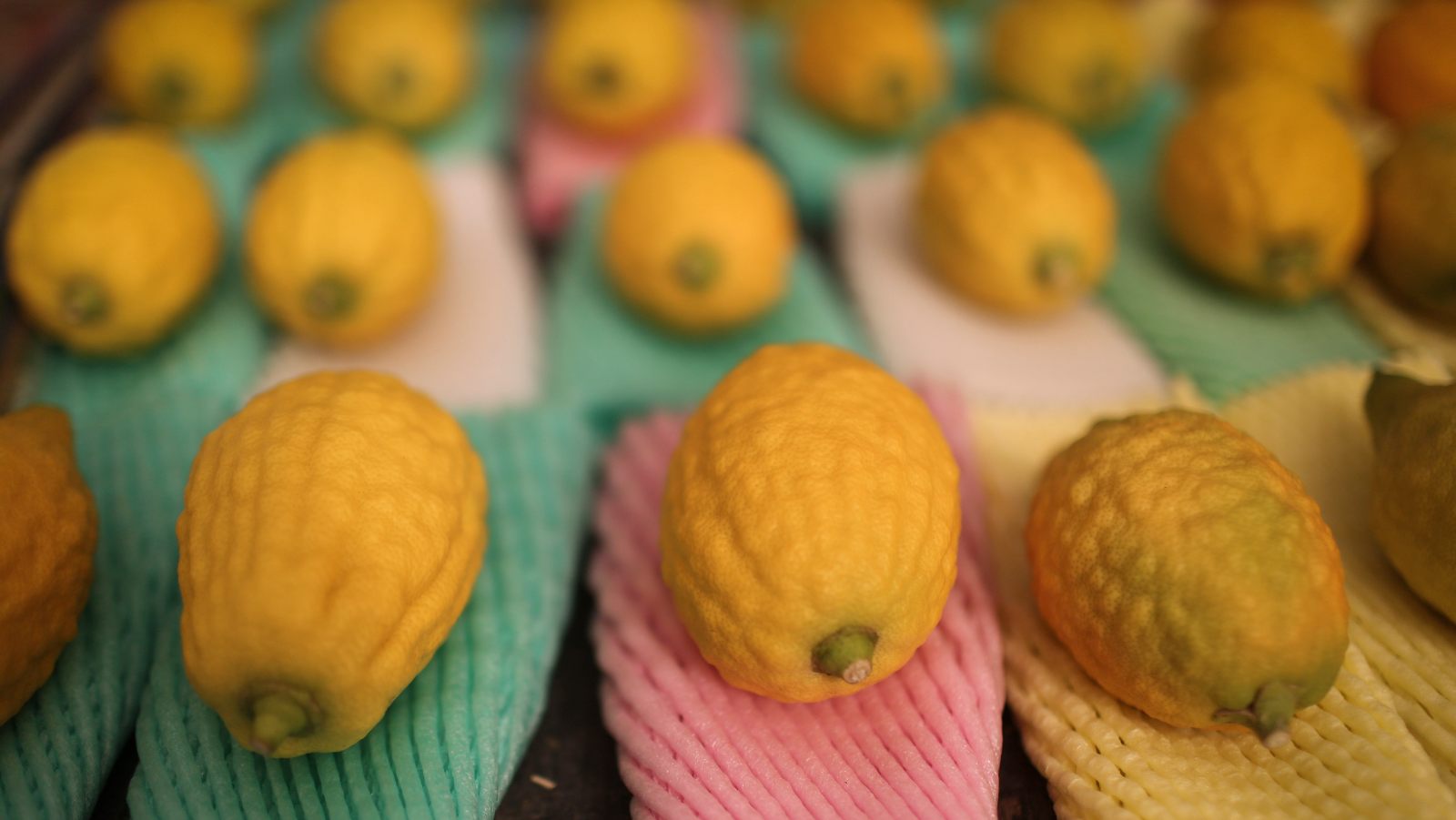 Etrogim on display at a four-species market in Jerusalem. Photo by Hadas Parush/Flash90

According to Joshua D. Klein, a scientist at the Agriculture Ministry’s Volcani Center, the market for Israeli etrogim stands at 1.8 million to 2 million fruit per year. But this is only a fraction of the number of etrogim grown, since so many get thrown away for being imperfect or not up to the ever-increasing demands and standards of customers.

Israeli etrogim are grown by about 10 farmers around the coastal plain – although there is also an etrog orchard down in Eilat – on about 60 to 75 acres of land. Etrogim are also grown in Morocco, California and Brazil, which produces more citrons than Israel but doesn’t use any for Jewish ritual, instead turning them into fruit preserves for cake, Klein notes.

Speaking of fruit preserves, etrogim are unlike lemons in that they are very dry fruit with very thick skin. The best culinary use for them is in the form of candied peel, preserves or jam. Certainly makes a festive change from plain old orange marmalade on toast.

If etrog marmalade doesn’t do it for you, you can always enjoy it in a beer. Each year, Tel Aviv’s boutique beer brewery The Dancing Camel releases a seasonal beer for the holidays called ‘trog wit, a Belgian-style Witbier that has an etrog-y floral fragrance. According to the company, the fragrance “adds a heavenly balance to the unmalted Israeli wheat.” Sounds fun.

Etrogim appear in art forms other than ancient mosaics, including an award-winning Israeli movie. Called Ushpizin, the 2004 film tells the story of a poor religious couple in Jerusalem who miraculously receive a large sum of money to celebrate the festival of Sukkot properly with a super-fancy etrog but who are then tried and tested over the course of the holiday.

Starring Israeli singer and actor Shuli Rand, who received Best Actor at the Ophir Awards for his role, the movie was a hit in Israel, giving audiences a glimpse at life in an ultra-Orthodox Jerusalem community.