Time isn’t just money in the operating room –– it can also mean the difference between lost or saved blood, and in some cases life or death.

Even with less complicated laparoscopic surgery, there is still the issue of how to seal interior incisions well so that more invasive open surgery can be avoided.

Seal-V, an Israeli adhesive positioned as a vascular “glue,” is coming to the rescue. This novel sealant, inspired by algae and developed by the company Sealantis, could be a game-changing tool for any kind of surgery, says Dr. Zeev Loberman, who heads the vascular surgery department in Bnai Zion Medical Center in Haifa.

Loberman tested Seal-V on more than a dozen patients undergoing vascular reconstruction surgery in the leg or arm, as part of a Sealantis clinical study.

“It doesn’t have the drawbacks associated with the other biological glues on the market,” he tells ISRAEL21c.

High cost, extensive preparation time, potential side effects due to the proteins in existing glues, and reactions to added chemicals are among the list of drawbacks Loberman cites.

As a member of the Sealantis Clinical Advisory Council, he sees a lot of potential for this new invention, developed by Prof. Havazelet Bianco-Peled at the Alfred Mann Institute tech transfer unit (AMIT) at the Technion-Israel Institute of Technology. Initial interviews with 16 vascular surgeons had revealed an immediate unmet medical need for such an adhesive.

‘This came at the right time’

With a CE Mark from the European Union, and poised for sales in the European market, Seal-V reduces blood loss by mechanically sealing areas of potential leakage in surgical reconstruction of large blood vessels such as the carotid, femoral, brachial and iliac arteries.

It is currently being developed for use in a variety of other surgical procedures, too: “There is always a place for another product, especially when we have so much trouble and problems with the current glues in place,” Loberman says. 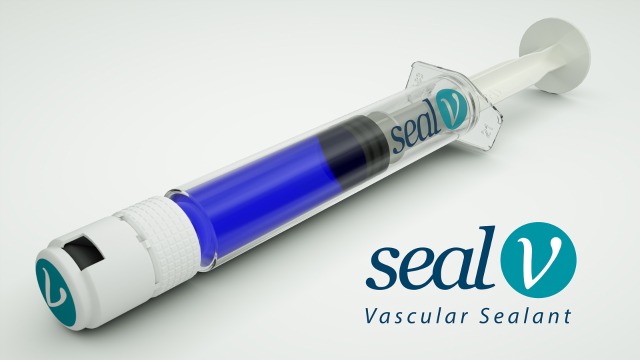 The new product is meant to reinforce sutures in vascular surgery.

“It could be used for all kinds of operations. Any kind of surgery you could imagine: brain, lung, and general orthopedic surgery. In any place where you are getting in touch with bleeding that might interfere with the healing of a wound or where you are prolonging an operation and putting a burden on the patient.

“This came at the right time,” he adds.

The timing in part was determined by AMIT, which put together a task force to meet the need.

“AMIT gave the tone. We determined the potential clinical applications and where there is the highest clinical need,” says Tehilla Bar Yehuda, marketing manager for Sealantis.

The technology is an alga mimetic, meaning it “mimics the way algae adhere to rocks under water – this is what gives it its key strength — binding strongly even in a wet environment,” Bar Yehuda tells ISRAEL21c.

The adhesive is based on alginate, a carbohydrate made by algae.

Bar Yehuda stresses that the Sealantis glue will not replace sutures, but reinforce them.

“And why is this a challenge? Vascular surgery patients are administered with anti-coagulants – blood thinners – so any bleeding during the surgery is very hard to stop,” she explains.

This is where Seal-V can help.

Founded officially in 2010, but in development since 2007, the Sealantis product is currently undergoing post-market clinical trials in Europe to gain favor with opinion leaders there.

Meanwhile, the company of 13 employees is advancing clinical trials for the US market, but seeks an additional $10 million in funding to help make those advances pass the American market’s strict regulatory hurdles.