No matter how many times their parents may tell them to “stand up straight,” thousands of teens with a severe form of the spinal curvature called scoliosis can’t do so without costly six-hour surgery — and even then, the deformity may not be perfectly corrected.

Straightening the spine is going to get much simpler when Israel’s new ApiFix implant passes successfully through the trials and approvals stages.

ApiFix system incorporates a miniature ratchet mechanism that enables incremental changes over several months, resulting in a better outcome than the standard procedure that costs upward of $100,000. 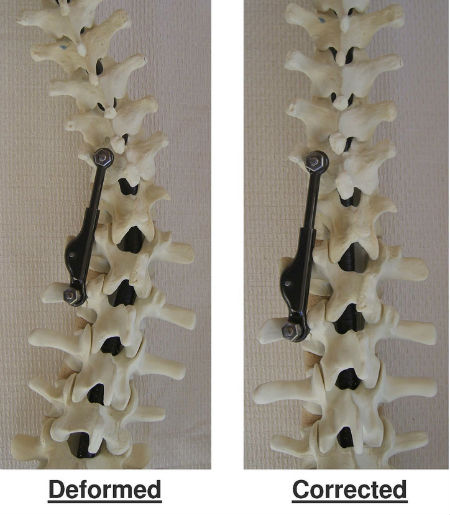 “One of the limits of the technology to correct scoliosis today is the need to make a correction in one surgery,” says ApiFix founder Uri Arnin, a medical devices designer.

“When you do it this way, you can properly address the bony element of the spine but you ignore the soft tissue — the ligaments and muscles that work against the correction you want to perform. Soft tissues take time to become flexible. If you do it over a period of days or weeks, they relax enough to realign themselves in the correct position.”

This was the concept he presented a year and a half ago to Dr. Yizhar Floman, a leading Israeli back surgeon. “We’d know each other more than 10 years, and have cooperated in other spinal projects,” Arnin tells ISRAEL21c.

The two men pooled their engineering and medical expertise to create a device geared toward adolescent patients.

“Younger ligaments are easier to manipulate and the quality of the bone is much better,” Arnin explains.

Rather than the current method of fusing several vertebrae using an average of 20 bone screws, the ApiFix method uses just two screws to secure a small expandable titanium rod to the backbone, inserted through a small incision. A patented control mechanism enables the surgeon to lock or unlock the rod via a needle procedure to allow for incremental corrections.

The company is starting clinical trials in Hungary and Romania, where the approval process is comparatively fast.

“In Israel it would take about a year, and in Hungary and Romania the surgeons are very experienced,” says Arnin.

“We have enough funding to complete trials on four patients, because each surgery costs $20,000 to $25,000. Based on the initial outcome, we hope to raise additional money and do trials on 30 patients with two years of follow-up. If we can get $100,000 or $200,000, we could complete CE certification within half a year and start selling ApiFix in private centers.”

The company was accepted a year ago into the Trendlines Group’s government-funded Misgav Venture Accelerator in northern Israel. Working on a lean budget of half a million dollars, ApiFix relies on subcontractors who’d previously worked with Arnin.

The eventual payoff could be significant, given a $600 million market in the United States and an additional estimated $300 million market elsewhere. About 40,000 people undergo surgery for scoliosis correction in the US every year. Arnin hopes to start the lengthy process of gaining US Food and Drug Administration approval once ApiFix has data from 30 patients.

He emphasizes that the device will be manufactured in Israel. “The level of technicians and machinery and knowledge we have here is top notch on a world level. We have no reason to outsource it abroad because we have great capabilities right here.”

Arnin has learned that the area of spinal technology is years behind other medical advances. “There is almost no sophisticated technology available, and I think such a project as ApiFix contribute a lot to the standard of care in this field.”