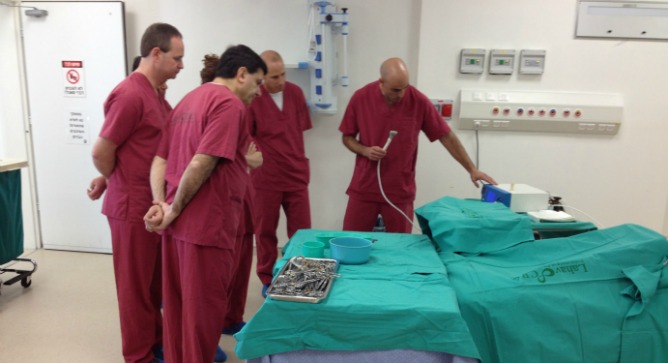 Surgeons do not need complex training to learn how to use BioWeld1.

Women giving birth by Caesarean section could be the first to benefit from a revolutionary Israeli invention for closing surgical incisions without stitches or staples. The technique also promises to leave patients less prone to infection and scarring.

Plasma is a gas in which a certain proportion of the particles are ionized. It has been shown to offer manifold benefits including tissue welding, control of bleeding, enhancement of tissue repair, disinfection and destruction of cancer cells.

However, plasma has enjoyed a limited role in surgery due to the high temperatures it creates and resulting harmful effects on body tissue. IonMed’s scientists found a way to make use of cold plasma as the power behind the BioWeld1.

The procedure takes a few minutes, seals the area completely, leaves minimal scarring or painful stitches, and does not require complex training.

“No one has done this before — and more than that, the platform of cold plasma is a technology that is not available in medicine yet,” says Ronen Lam, IonMed’s co-founder and vice president for business development. “We will probably be the first,” he tells ISRAEL21c.

The company anticipates receiving the CE mark of approval in Europe by the end of the year. After closing its next financial round, IonMed would then look into beginning trials in Europe and in the United States toward getting approval of the US Food and Drug Administration (FDA) and launching its next cold plasma-based product.

BioWeld1 is the brainchild of Ronen’s brother, Amnon, who led development projects at Tower Semiconductor in northern Israel and at Intel’s Israeli research center. Prior to that, he’d been a medic in the military. 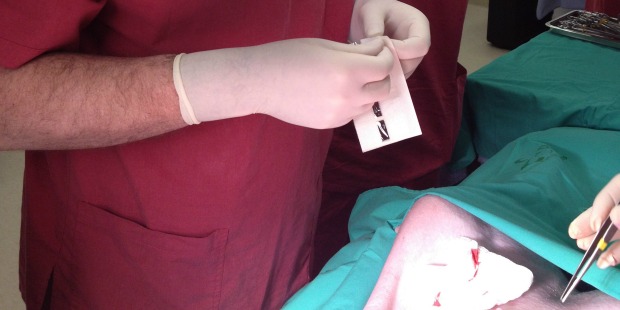 The product provides a next-generation alternative to staples and stitches.

His familiarity with cold plasma from Tower – where it was used for etching semiconductors — gave him the idea of welding together his two areas of expertise.

Amnon Lam saw the potential of cold plasma in healthcare, and toyed with applications in cosmetics, dental and skincare.

“At the end of the day, he found wound closure the most attractive one,” says his brother. That was about three years ago.

“Tissue reconnection has been done for thousands of years with sutures, and in recent years with staples and glues,” says Lam. “It is time for something new in this traditional market, and that’s why we decided to start here.”

With half a million dollars in seed money from the Israeli Office of the Chief Scientist, IonMed joined the Trendlines incubator in northern Israel and developed the concept to the point where it closed a $3 million financing round in 2011. The company now employs six people in its office in Yokne’am Ilit.

“Our cold plasma technology is unique because of its impact on tissues and the wide spectrum of applications it can address.”

Lam explains that many companies have been bringing advanced surgical staples and adhesives to the market. “But our cold plasma technology is unique because of its impact on tissues and the wide spectrum of applications it can address, so there is a lot of interest from big players,” he says.

The BioWeld1 generator delivers the cold plasma through a variety of disposable tips. The skin closure procedure is performed using a cold plasma jet to apply a trademarked biological film called Chitoplast to weld the tissue together. Other applications in development do not require Chitoplast and rely solely on the tissue effects of the plasma jet.

The company’s three clinical trials, which have so far focused on closure of Caesarean section incisions, showed BioWeld1 to be excellent for sealing the incision and promoting healing and tissue disinfection, Lam reports. It also has potential for reducing hospitalization and operating room usage.

“We are focusing on the Cesarean section first, because we found it will be the easiest path to market due to the importance of achieving a superior cosmetic result while reducing time in the operating room,” says Lam.

“We are in the midst of strategic discussions right now in order to chart our next application. Areas under consideration include external closure in plastic surgery, treatment of chronic wounds as well as internal applications in abdominal, thoracic and colorectal surgery.”

IonMed gathered an advisory board with leading obstetrician-gynecologists and surgeons in Germany, Brazil and Italy. Four OB/GYNs in Europe are poised to launch the product later this year, pending CE approval.

“All of them have tested our equipment in trials,” Lam stresses.

Investors are now being sought for a Series B funding round, says Lam. “We will be carrying out additional trials in the near future to expand the use of cold plasma to go deep on external closure while promoting additional applications.”