It sounds like something out of a sci-fi thriller, but an Israeli holographic imaging system for the operating room is poised to revolutionize surgery in the near future.

Though only in the clinical beta prototype stage, the world’s first 3D holographic display and interaction system for medical applications was already featured on the TV show Grey’s Anatomy and has been tested successfully by surgeons at Israel’s Schneider Children’s Medical Center in Petach Tikva.

This proprietary digital technology from RealView Imaging in Yokneam projects hyper-realistic, dynamic 3D holographic images of body structures “floating in the air” without the need for special glasses or a conventional screen.

The physician can literally touch and interact precisely with the projected three-dimensional volumes, providing an unprecedented tool for planning, performing and evaluating minimally invasive surgical procedures.

Cofounder Shaul Gelman explains that the breakthrough technology can be summarized as very rapid printing of light in free space. The system is fed with data from standard medical imaging sources, such as ultrasound.

The doctor sees a hovering dynamic image – such as a pumping heart or a fetus moving in utero — and can manipulate that image to guide an actual surgical procedure.

Eventually, RealView Imaging’s technology could enhance capabilities in anything from virtual gaming to architectural design. For now, the focus is on medical applications.

“Our system is built from two subsystems,” Gelman tells ISRAEL21c.

“The first system can take any 3D data — from ultrasound, CT, MRI or even from your computer. Instead of printing this data, we create a hologram out of it with our unique hardware and software, and then it goes to an electro optical system that reconstructs this data in three dimensions in free space.”

A hologram is formed by the interference of light beams from a laser or other light source. This invention won Dennis Gabor a Nobel Prize in physics in 1971. Since then, it was the holy grail of display technologies to create the sort of live, high-quality, full-color usable holograms now demonstrated by RealView Imaging.

“The holographic projections enabled me to intuitively understand and interrogate the 3D spatial anatomy of the patient’s heart, as well as to navigate and appreciate the device-tissue interaction during the procedure,” said Dr. Einat Birk, pediatric cardiologist and Director of the Institute of Pediatric Cardiology at Schneider Children’s Medical Center.

“We are continuing clinical evaluations and working on our first commercial system, which will take into account all the input that we received in clinical trials and technical analysis and testing,” says Gelman, who also is vice president for research and development due to his expertise in electro-optical and display technologies.

The company aims to have this system ready for sale next year. Talks are currently underway with potential partners.

“We are very passionate about realistic visualization and intuitive interaction with 3D images, specifically for medical imaging,” Gelman says.

“Minimally invasive procedures are becoming more common, so it is more of a necessity to understand 3D data. There is no better way to do that than with a hologram, and interacting with it is only possible with a 3D hologram. We are happy to collaborate with any company that shares this passion.” 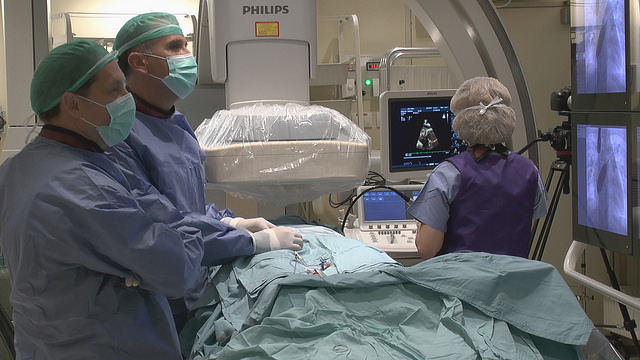 RealView Imaging – not to be confused with two other Israeli companies, RealView Medical and Real Imaging – was founded in 2008 by Gelman along with entrepreneur Aviad Kaufman and Prof. Carmel Rotschild, who heads optical engineering studies at the Technion-Israel Institute of Technology. The company’s medical director is Dr. Elchanan Bruckheimer, director of the Cardiac Catheterization Laboratories at Schneider Children’s Medical Center.

In addition to cardiac applications, RealView Imaging medical holography could also be used in obstetrics, orthopedics and neurosurgery – “anyplace that 3D data gives added value to the physician, procedure or patient,” says Gelman.