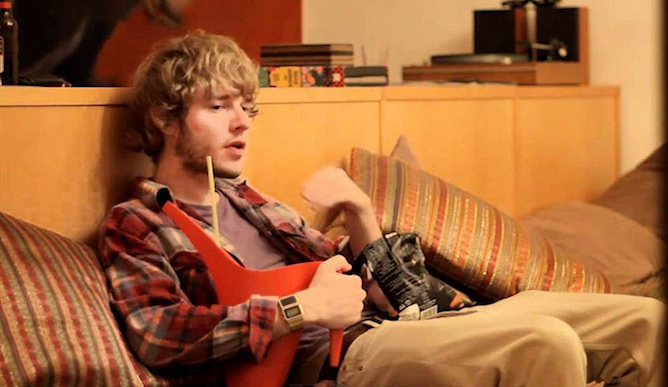 Vania Heymann as seen in a student video he made about a watering can.

Thanks to rock icon Bob Dylan, there’s a young Israeli on the proverbial block who’s making a serious name for himself across the world. Meet Vania Heymann, a 27-year-old Jerusalemite, whose brilliant video editing of Dylan’s 1965 mega-hit Like a Rolling Stone has millions of viewers in awe.

Heymann, too, is amazed, but for a very different reason.

In an interview with ISRAEL21c via Skype from Brooklyn, New York, where he now lives, Heymann says, “I was totally surprised by the huge success of the clip. I mean, I knew it would get attention because of Dylan, but nothing like this. It’s weird.”

Equally “weird,” perhaps, is Heymann’s meteoric rise – the one that led famous Israeli rock singer and songwriter Yoni Bloch to recruit the college dropout to work for Interlude, the interactive video technology company he established three years ago with offices in Tel Aviv, Palo Alto and Manhattan.

Interlude, a hot Israeli startup that won the 2012 Prime Minister’s Prize for Initiative and Innovation, was approached by Columbia Records and Legacy Recordings to produce an interactive video to promote Dylan’s new box set, The Complete Album Collection, Volume One, released on November 5.

Heymann was clearly the man for the complex job. It turned out to take two full months of intense directing, shooting and editing. He and long-time friend and collaborator Natan Schottenfels created 16 separate clips – the equivalent of a 90-minute film — with different celebrities, in different scenes, lip-synching the lyrics. Only the section showing Dylan himself performing the original version of Like a Rolling Stone is not lip-synched.

The video is geared to look like a TV set with channels. The viewer can watch each one separately from beginning to end, or change channels in mid-song. No matter when one switches to an alternate clip, the music and lyrics continue from precisely that spot. The well-known characters and settings in each rendition — such as The Price is Right host Drew Carey, comedian and podcast host Marc Maron, ESPN host Steve Levy and rapper Danny Brown – volunteered their services.

“I wanted to capture the essence of American television,” Heymann says. “So Natan and I spent hours and hours simply watching everything there was.”

The end result is quintessential Dylan in terms of its critique of modern American society, yet a technological masterpiece that is a product of the very cultural milieu on which it aims to pass judgment.

Heymann says that while some TV stations were happy to provide backdrops for only the cost of studio time, others flatly refused.

“They thought it was strange that we were basing a clip on such an old song,” he explains. “In addition, they didn’t grasp the nature or scope of the project, and didn’t have the patience to invest in the effort.”

One notable refusal came from NBC’s Today show. During a recent segment of the popular program discussing the clip, the show’s producer came on camera to admit sheepishly that not taking part had been a big mistake. Every major publication in the United States and elsewhere has published articles about it.

Heymann says he is still trying to absorb the magnitude of the publicity. “I’m not used to having my name come up so much,” he says.

Though he may come by his modesty honestly, it is a trait that will be hard for Heymann to sustain, given his personal story of steady success.

One of four siblings, Heymann was raised in an Orthodox family in Jerusalem. His mother, an anthropologist and his father, a geriatric physician, immigrated to Israel from France in the early 1970s. But he took his passions in a very different direction, where both career aspirations and religious observance were concerned.

After completing his military service in the Nahal Brigade, he began studying visual communications at the prestigious Bezalel Academy of Art and Design in Jerusalem. During his freshman year, in 2010, one of his homework assignments went viral on the Web. It was a video clip in which he replaced religious symbols with an Ikea watering can that had starred in another of his assignments.

He later acknowledged this was a veiled reference to philosopher Bertrand Russell’s “cosmic teapot” analogy used to explain his atheistic beliefs. The clip was touted and tweeted by ardent atheists, prominent among them evolutionary biologist Richard Dawkins. Still, Heymann says, his religious parents are proud of his accomplishments.

During the summer of 2011, Heymann caused another Internet stir with a low-budget commercial for Shapiro Beer, a micro-brewery in Jerusalem. The hundreds of thousands of YouTube views generated by the ad caused the Israeli entertainment world to take notice of the student. This, in turn, helped his subsequent school projects garner attention. In particular, a video called “Shelf Life” – about the contents of a refrigerator – was featured on Israeli Channel 2’s Ulpan Shishi (Friday Studio), the highest-rated news program in the country.

This, Heymann says, was the turning point in his career. He became so busy that he had to quit school to accommodate his schedule.

By the following year, Heymann was creating actual commercials — for Pepsi Max and American Express – as well as music videos for performing artists. Last January, the ultra-popular Israeli satire program Eretz Nehederet (A Wonderful Country) began to air Heymann’s “Bekitzur [In Brief],” a series of two-minute episodes, based on the French series “Bref.”

All of this work, he says, was enabled by his learning to improvise with a digital single-lens reflex camera (DSLR) that he purchased when it came out in the market three years ago. “It was relatively revolutionary at the time,” he says, “because it provided an opportunity to give videos a cinematic look in an affordable way.”

Heymann is not sure what his next Interlude project will be. “I’m still reeling from and dealing with the aftermath of the current one,” he says.

Indeed. And what about Bob Dylan? Has he actually met or spoken to the star whose song he spent weeks directing and editing?

Heymann laughs. “I’m waiting for his call,” he says.