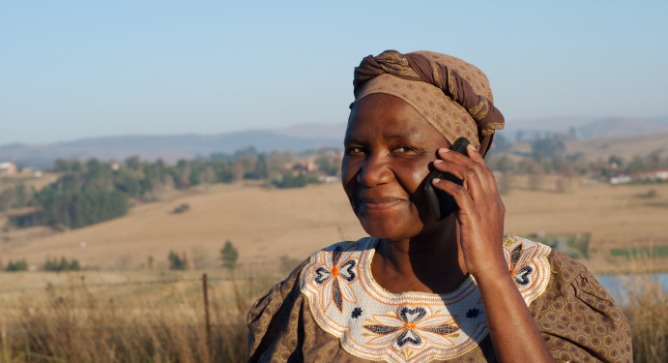 With Nova Lumos, people in Africa will be able to buy solar power through their cell phones. Image via Shutterstock.com

It’s hard to imagine the concept of a “power pimp” in Africa unless you have lived there. But it makes sense and cents on a continent that lacks a unified power system. There is basically no electric power in most rural places unless you are enterprising enough to own a battery and generator of some sort –– making you the “pimp” by letting other people charge their cell phones at crazy inflated prices.

It’s a problem that humanitarians worldwide seek to address, but an Israeli solution would do this using a cell phone. The idea of Nova Lumos is to buy solar power by phone on a needs basis, putting the middleman (that pimp) out of business.

Davidi Vortman, general manager of the company, tells ISRAEL21c that the idea is to sell small mobile solar systems to individuals –– for charging cell phones, lights or small appliances –– paid for in affordable increments using a cell phone.

“The system is small enough for one person to carry and simple enough for a person to put on the roof. Just connect it without any technician; and use a cell phone to operate it through a mobile phone with a simple SMS,” Vortman tells ISRAEL21c.

Could Lumos save the day for about 1.5 billion people in Africa and Asia who don’t have access to power? The system provides access to green energy, a practical off-grid solution, a security system to protect the mobile pack and a good business opportunity to mobile providers in Africa, who can lease the Lumos pack as a bundled service.

“Africans don’t talk as much as they’d like to, not because they don’t have money to talk, but because they don’t have money to buy the charge,” explains Vortman. “When you think about the alternatives, there are the electricity pimps, a local entrepreneur with a car battery and generator and a kerosene candle for light, or a generator, which 99 percent cannot afford.

“With no grid there is no way to buy electricity. We believe distributed electricity would make more sense,” he says.

Cell phones for Africans are lifelines: a tool for banking, communicating and accessing the Internet. Some 800 million cell phones are being used across the continent, and it is clearly an important emerging market in both high-tech communications and green technologies.

“We need to make technology available in a way that is different,” says Vortman. “If they would have said years ago that 80 percent of Africans would have cell phones today, you’d think they were joking. There are no landlines, but they just leaped to mobile. The same with banking, where they use their cell phone and now have the largest market for that. They just leaped. I think with energy it must work the same way.”

Energy is a harder sell than apps.

While apps from Israel to manage police forces (like Nowforce) or low-tech browsers (like VascoDe) are an easy sell, it has proven harder to get Africans hooked on green power – mainly because of the prohibitive cost.

Paying in increments by phone could eliminate this barrier. The challenging part will be securing the systems and penetrating the market before other companies jump on the bandwagon.

Nova Lumos was founded in 2012 and is now carrying out pilot projects to test the system using several hundred units in Nigeria and Guinea.

In the far future, the plan is to offer this unique approach to developed countries in need of a secure and reliable solution for far-flung locations. For example, Lumos could also be a provider of pay-as-you-go systems that purify water.

Founders of the company all come with expertise in large-scale solar energy installations in Israel, and in the networking and communications high-tech business. Vortman used to work at Nice and Comverse, managing large business units.

“I always felt that I wanted to do something different – something that impacts people,” he says.

Merging the two worlds of green energy and high-tech, as many Israeli companies are starting to do, might just save the day — and the planet.

UNCOVER ISRAEL - Get the ISRAEL21c
Weekly Edition free by email
Sign Up Now!
Bring Israel's story to life.
Millions of people around the world rely on us to gain a deeper understanding of Israel. We are the trusted source for original content you won't find anywhere else.
You can make a difference. Donate today to support journalism that brings Israel’s story alive.
SUPPORT ISRAEL21c
Read more on:   Nova Lumos, Africa, solar power, Environment, Energy, Eco-Living, Mobile