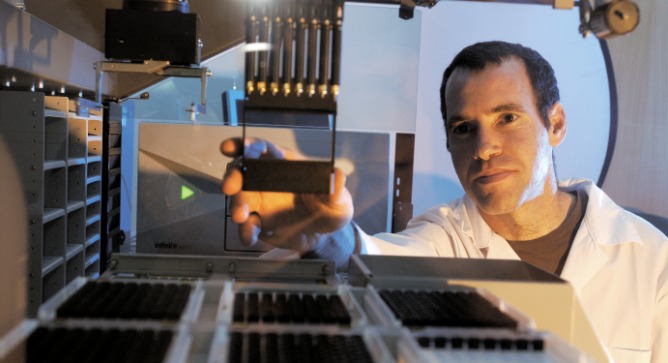 Prof. Amir Aharoni at work in his lab. Photo by Dani Machlis/BGU

About four million Americans suffer from psoriasis, a chronic autoimmune skin disease that causes patches of inflamed, silvery-white scabs. There is no cure for the condition, but Israeli researchers believe they may be on the road to formulating a groundbreaking drug candidate that could finally do the job.

As described in the journal Chemistry and Biology by the team from Ben-Gurion University of the Negev (BGU), their study in collaboration with Israel’s Teva Pharmaceutical Industries showed that inhibiting the immune system protein Interleukin 17 (IL-17) could be the key to controlling the skin disease.

“Psoriasis is mediated by pro-inflammatory cytokines,” explains lead researcher Prof. Amir Aharoni. “One of the main cytokines that plays a role in this and other autoimmune diseases is IL-17. Our goal was to inhibit IL-17’s action and slow the progression of several of these diseases.”

Once they mastered the methodology using animal models, they looked for the best indication on which to test it. They zeroed in on psoriasis because previous studies showed IL-17 to be particularly important in its progression.

Two and a half years of work proved that their engineered receptor, IL-17RA, is highly effective in eliminating acute human psoriasis introduced to mice. No human trials have taken place yet.

“Now we are working in two directions: finding a suitable partner for research, and using a similar approach to target other diseases,” Aharoni tells ISRAEL21c.

Promise for Crohn’s and colitis, too

No longer financed by Teva, his lab team is successfully inhibiting other cytokines that play a major role in Crohn’s disease and colitis, two common auto-immune disorders affecting the digestive tract.

“We’re searching for other big pharma investors to promote the project, because now it requires quite a substantial investment,” Aharoni says.

The Israelis’ application of “directed evolution,” or protein engineering for the development of better therapeutics, is relatively rare and used mainly for antibodies.

“Some of the features of the system are unique to us. No competitors are doing exactly the same thing,” claims Aharoni, whose collaborators included Marianna Zaretsky and Itay Levin of BGU.

“Since the directed evolution method can be applied to other receptors involved in autoimmune diseases and cancer, I believe that we are just starting to unravel the potential of this approach,” he adds.

In 2009, the global market for psoriasis therapies alone was valued at $3.5 billion, with systemic therapies such as the BGU approach accounting for $2.6 billion of the total. In the future, the engineered IL-17RA may serve as an alternative or complementary treatment to IL-17A antibodies and other biological treatments.

Accordingly, interest in this unique psoriasis drug candidate is high. However, Aharoni stresses that it is only in the first and essential stage of development.

“We are proud to have a drug candidate that can be tested in mice and humans, but phases of clinical trials are very long,” he cautions.