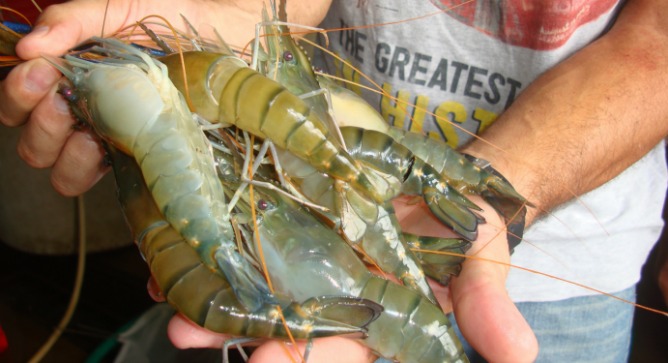 Male prawns are meaty and fast-growing.

An Israeli research team has found a way to mate male prawns and increase yields and profitability for farmers. The revolutionary advanced gene-silencing biotechnology for aquaculture was developed in a lab at the Ben-Gurion University of the Negev (BGU).

Prof. Amir Sagi, president of the International Society for Invertebrate Reproduction and Development, is celebrated for his extensive research on the regulatory role of the androgenic gland in sex-differentiation and intersexuality of crustaceans. Now his lab team is garnering headlines for its innovative biotechnology that will change the field of freshwater prawn farming.

“This is the first time that the aquaculture industry will be able to use advanced gene silencing to increase yields,” says Sagi. “Since the males are faster growers, this discovery could help local farmers increase their incomes.”

The process was patented and licensed through BGN Technologies, BGU’s technology transfer company, to the Tiran Group, an Israeli shipping company with aquaculture farms in China. Tiran recently signed an agreement with Green Advances, a Vietnamese company, to advance aquaculture in Vietnam using the groundbreaking technology.

“Prof. Sagi has pioneered a number of techniques to increase rice and crustacean output in countries like Vietnam for years,” said Doron Krakow, executive vice president of American Associates, Ben-Gurion University of the Negev. “As the world faces a challenging population growth and decreasing resources, [this] work provides sustainable solutions for developing nations.”

Until now, Vietnamese and other prawn farmers had been separating the male and female crustaceans by hand.

“You don’t have to do this manually anymore. This kind of technology allows growers to increase their income by approximately 60 percent,” Sagi tells ISRAEL21c.

Sexual differentiation in crustaceans is regulated by the androgenic gland (AG). Removing the AG from immature males can result in sex reversal. Employing their technology, the Israeli scientists found that sex-reversed (neo-female) prawns were capable of mating with male specimens to produce all-male offspring.

“We’re crossing two males and the progeny are all male,” says Sagi, who has published more than 100 scientific publications and has five patents and 13 Gene Bank entries to his credit.

And the technology not only improves productivity but requires no considerable infrastructure investment either.

“The technology is sustainable because it doesn’t use any chemicals or hormones and does not create genetically modified organisms. This is made possible through the unique monosex culture of prawns, which we can obtain by using our original discovery of a naturally occurring, androgenic hormone that influences their gender. Since males are faster growers, this discovery could help farmers increase their income,” he says.

From the desert to your plate

Prawns and shrimp are among the most popular types of seafood on menus worldwide. And with reports of a rise in seafood consumption coupled with depleted resources, something had to be done to help the prawn farmers keep up with demand.

It is somewhat ironic that it took a lab team located in the Negev Desert to change the global freshwater prawn industry. On the other hand, Israel has a history of fish-farming in the desert and Sagi has an international reputation. He is former dean of the BGU faculty of natural sciences, and a member of the National Institute for Biotechnology in the Negev.

Sagi says his research will not only change prawn farming for the better but could also help crop farmers or other fields of aquaculture.

“It’s a promising biotechnology that, if appropriate to other organisms and crops, can help with the well-being of [humankind],” Sagi tells ISRAEL21c. “Many scientists around the world are trying to do similar things. Now they will be encouraged because you can see that this technology came from basic science.”

UNCOVER ISRAEL - Get the ISRAEL21c
Weekly Edition free by email
Sign Up Now!
Bring Israel's story to life.
Millions of people around the world rely on us to gain a deeper understanding of Israel. We are the trusted source for original content you won't find anywhere else.
You can make a difference. Donate today to support journalism that brings Israel’s story alive.
SUPPORT ISRAEL21c
Read more on:   Environment, Agritech