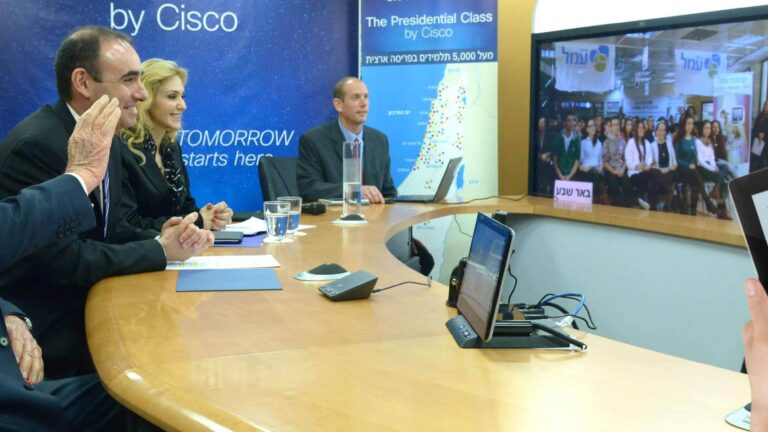 Israeli President Shimon Peres delivered an online civics class to over 9,000 high school students across Israel on February 6, 2014 and set a Guinness World Record while doing it. The class was delivered from Cisco Systems headquarters and was broadcast live to classrooms using Telepresence technology.

“We immediately liked this new record idea for three reasons; first because talking about civics and talking about democracy is relevant for everybody in the world and the contribution we make is so important a topic for the young generation. The second important aspect was that we had a special feature, a person who has seen the country from its origins to today and who better to speak to the students. The third part was about the technology, a web based solution that can be used within education to keep everyone connected and informed. The number to beat for this record was 5,000 participants . . . which means the president of the State of Israel and all the students are Guinness World Record holders,” Frigatti said.

He added: “I have an interesting surprise because you’re holding two records; not only have you taught a wonderful civics lesson but you’re also the oldest head of state in the world.”

After the record was announced Peres thanked Guinness World Records, Cisco Systems and most importantly the pupils at the Amal Schools across the country.

“This record should really be for all the students who participated, they created this record. We have to spread education; this is about encouragement of that goal. The more that can participate in these sorts of lessons the better. What we have to do is invest at least as much in education as we have in entertainment and make it approachable to all pupils,” said Peres.

UNCOVER ISRAEL - Get the ISRAEL21c
Weekly Edition free by email
Sign Up Now!
Bring Israel's story to life.
Millions of people around the world rely on us to gain a deeper understanding of Israel. We are the trusted source for original content you won't find anywhere else.
You can make a difference. Donate today to support journalism that brings Israel’s story alive.
SUPPORT ISRAEL21c
Read more on:   News, Shimon Peres, Guinness World Record