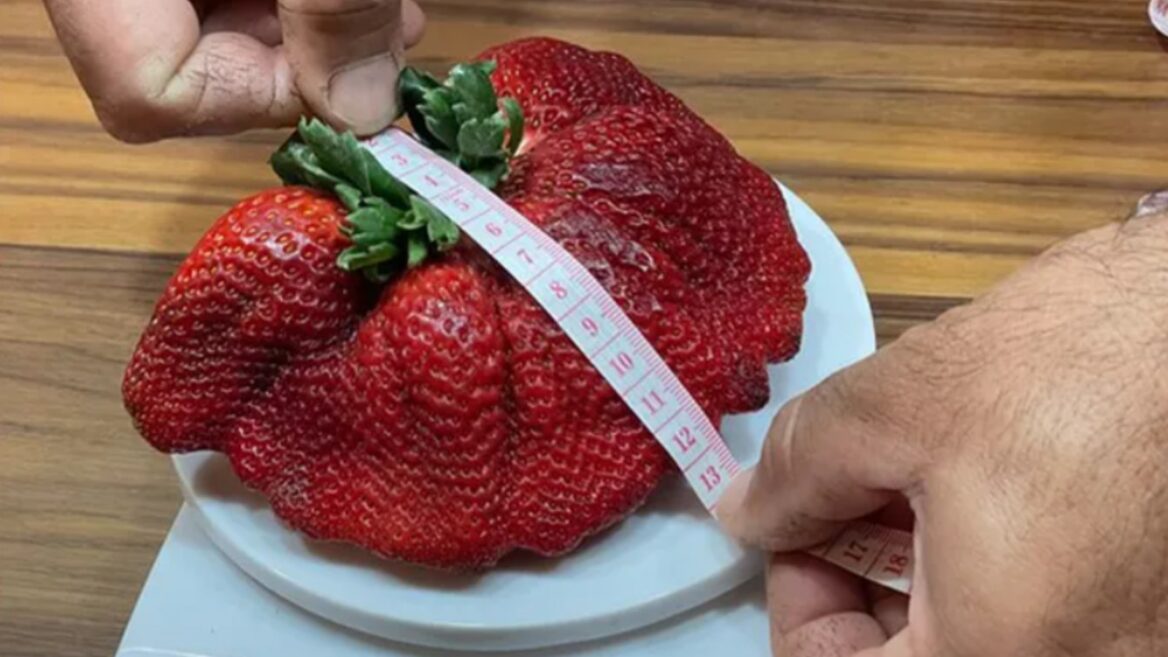 On February 12, an Israeli strawberry was certified by the Guinness World Records as the world’s heaviest.

Toot BaSadeh (Strawberry in the Field) farm, in centrally located Kadima-Zoran, grew the berry that weighed 289 grams (about 10 ounces), or 290 with its stem.

To put that in perspective, farmer Tzahi Ariel first weighed an iPhone, which clocked in at 194 grams.

A regular strawberry weighs just 15 or 16 grams. The previous record-holder, grown in 2015 by Koji Nakao in Japan, weighed 250 grams.

“I am a second-generation strawberry farmer,” Ariel tells ISRAEL21c. “Since my three brothers and I were children, we grew strawberries with our father.”

About 10 varieties of strawberries are raised on Toot BaSadeh’s 100 dunams, or 24.7 acres. The record-breaking Ilan variety was first planted there about three or four years ago, and like the others is sold in the farm’s own market and across Israel. 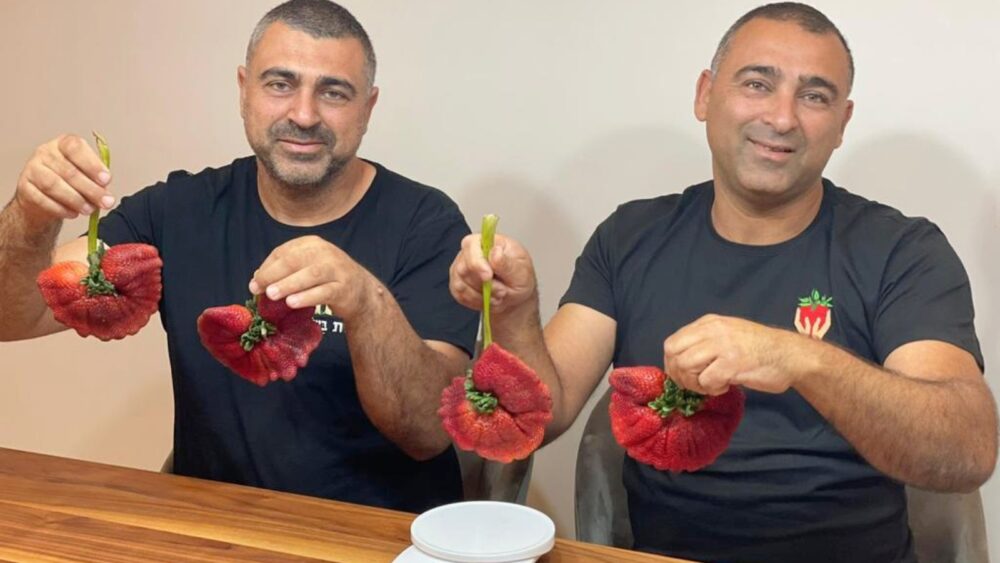 “The news has spread all over the world. I am very proud to put Israel and Kamida-Zoran on the map,” Ariel says.

“We are getting calls from China, Australia, Dubai – everywhere. It’s a big honor for us.”

Nir Dai, the Volcani Center plant scientist who bred the Ilan variety grown on Toot BaSadeh, was there for the official weighing.

This strawberry expert said it was indeed the biggest strawberry he’d ever seen. 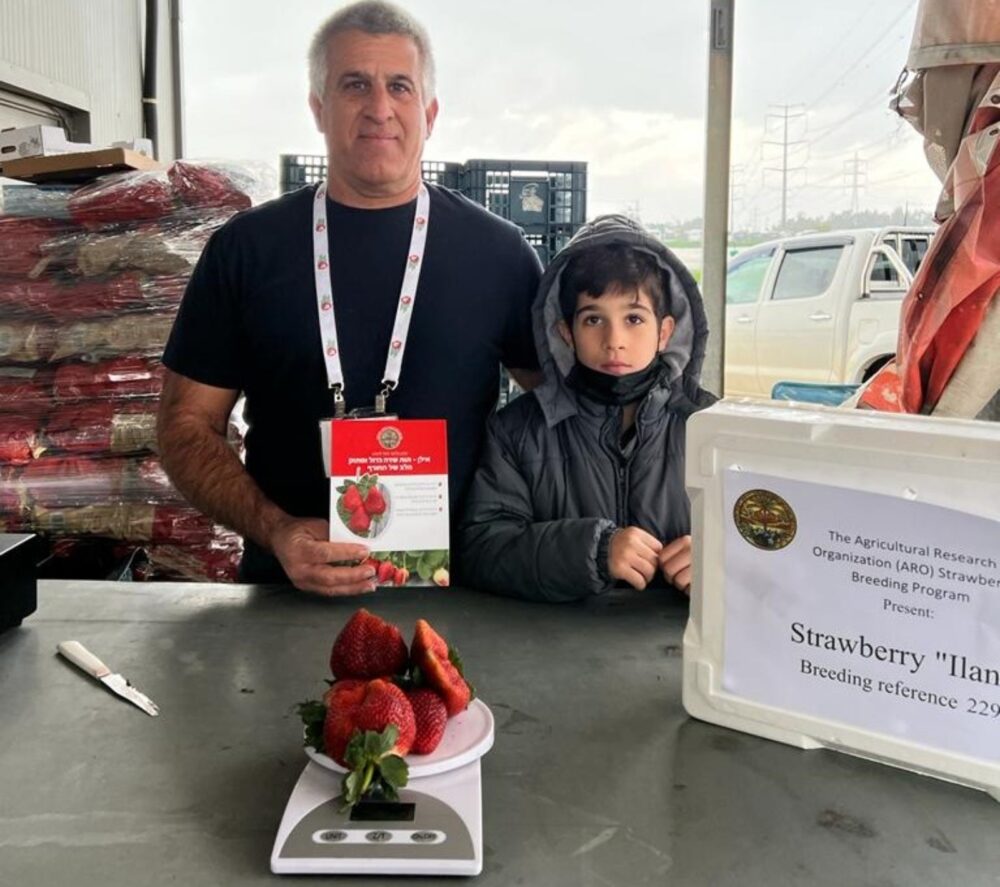 Although Israel has only about 1,000 acres of strawberries — all grown in covered hothouses at various farms — the government’s renewed breeding program at the Volcani Center has introduced about 10 commercial varieties since 2006.

Like Ilan, almost all new Volcani cultivars are named in honor of (and a few in memory of) children: Tammuz, Barak, Yasmin, Gili, Lavi, Tamir, Ella and Rocky, named for Dai’s son Sela, which means “rock” in Hebrew. The Carmel Agrexco company bred strawberries named Orly, Yuval and Dandy. “Matan and Rocky are very good, and now they dominate the fields,” Dai tells ISRAEL21c.

One of the Volcani Center’s original goals in breeding new varieties was lengthening the growing season. “In the 1970s, you could find strawberries in the market only from late January to mid-February,” Dai says. Now Israeli strawberries are available from November to May. 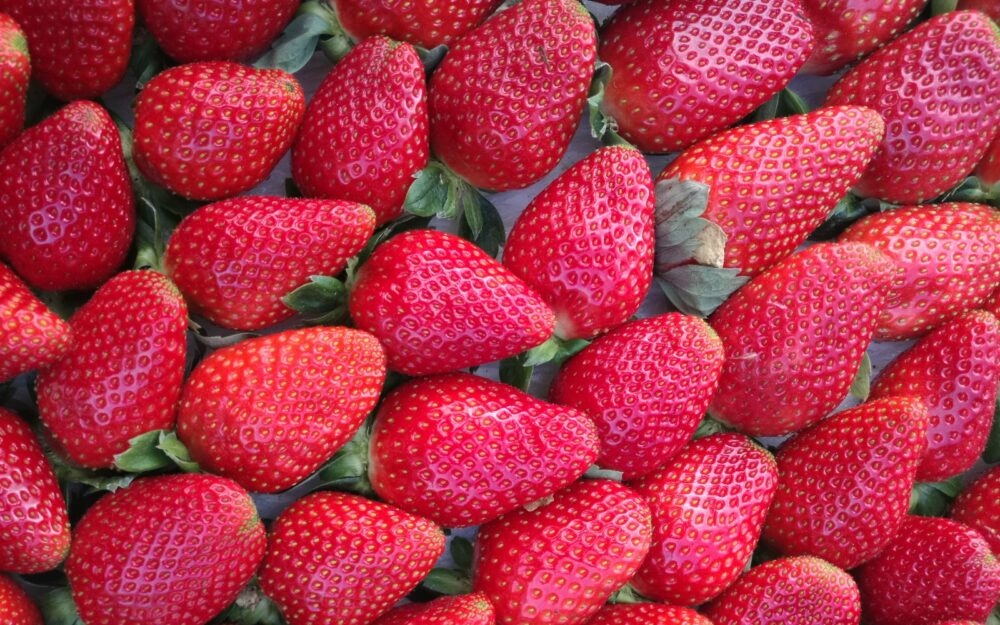 The focus today is enhancing shelf life, flavor, aroma and firmness; berries that are too soft cannot be shipped long distances.

Shape matters, too – for example, Lavi is wide and conical while Hadar is oval, and Tammuz is heart-shaped. Color is another consideration depending on the market. The British prefer bright red strawberries, while Americans like darker ones. 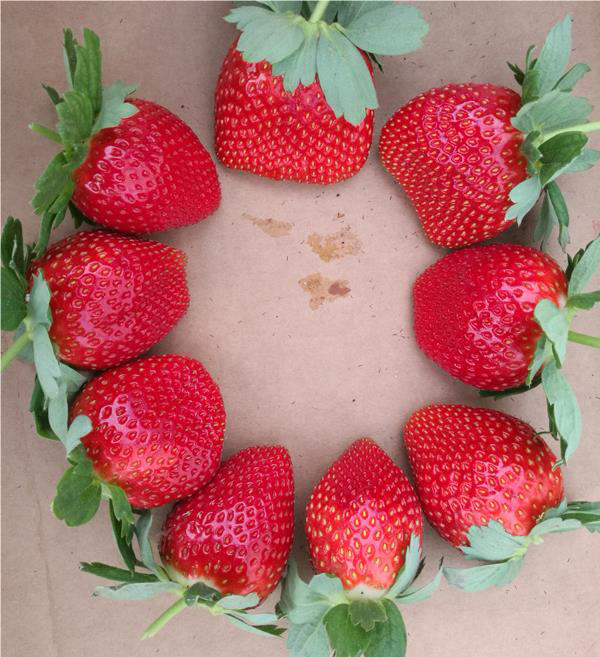 However, Dai says, most Israeli strawberries stay on the domestic market because demand is high and there isn’t enough land to increase capacity significantly.

The record-breaking Ilan, planted in October, is very vigorous and flowers rapidly. In the very early stage, several fruits fuse together into one flower, Dai explains.

“This variety always has huge berries, 50 to 60 grams. And the weather very much affects the size. Cold temperatures make the berry big and heavy because from flower to fruit takes more than 45 days, compared to 25 days in warmer weather.”

Dai says the Volcani Center experimented with growing strawberries in the Golan Heights in July, but their average weight was just 12 to 15 grams.

He has high hopes for Ilan, which is easy to pick and boasts exceptional flavor and shelf life.

“It’s very crunchy and sweet and hardy enough to grow outdoors. I hope it will be commercialized in southern California or even in South Africa,” Dai says.

UNCOVER ISRAEL - Get the ISRAEL21c
Weekly Edition free by email
Sign Up Now!
Bring Israel's story to life.
Millions of people around the world rely on us to gain a deeper understanding of Israel. We are the trusted source for original content you won't find anywhere else.
You can make a difference. Donate today to support journalism that brings Israel’s story alive.
SUPPORT ISRAEL21c
Read more on:   Spotlight on Israel, Environment, Volcani Center, Guinness World Record, strawberries