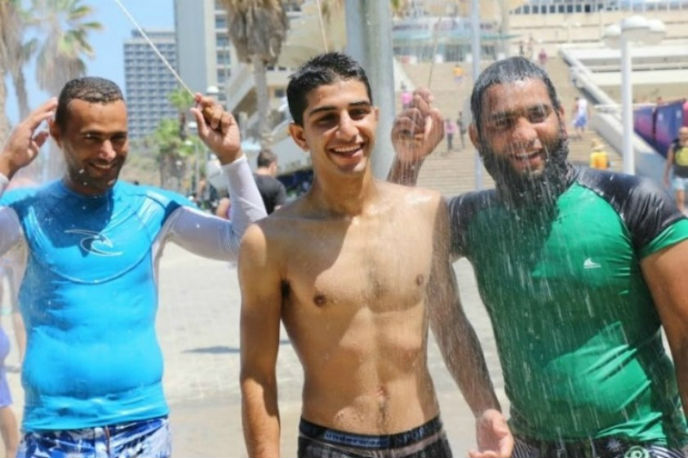 These three men from Zarka are learning to be surfing instructors. Photo courtesy of Green Prophet

These three men from Zarka are learning to be surfing instructors. Photo courtesy of Green Prophet

ISRAEL21c’s article on Nitzan Solan, a young Israeli engineer who surfs with Arab-Israelis in the coastal village of Zarka, has led to a new “surfing for peace” initiative.

Shortly after she read the piece published in July, Neta Hanien, co-owner of Juha’s Guest House in Zarka, contacted Solan.

“Neta told me about a lot of people looking for surfing lessons,” Solan tells ISRAEL21c. “She wants to establish a surfing school at the Guest House, and she realized that I am the girl to help her do it.”

The two women organized a training day for three new surfing instructors from Zarka, a disadvantaged village that is trying to boost its tourism offerings.They worked in conjunction with Arthur Raskovin, owner of Tel Aviv’s Doctor Surfsurfing school and cofounder of Surfers 4 Peace, an Israel-based organization that uses surfing-related activities as a hand of friendship to Gazan Arabs.

“We all connected and had a great day,” Solan says.

And that was despite the fact that the training day took place in August, during Israel’s 50-day military conflict with Hamas in Gaza.

Now, Solan and Hanien are trying to build on that good start by soliciting donations of surfboards for Zarka youth interested in pursuing the sport.

“We’re trying to push it forward. We want to provide help for these [Arab-Israeli] kids to surf on their own, and it’s really exciting. And it all started from the article on ISRAEL21c,” says Solan, giving credit to the story’s author, Karin Kloosterman, for sparking the connections.