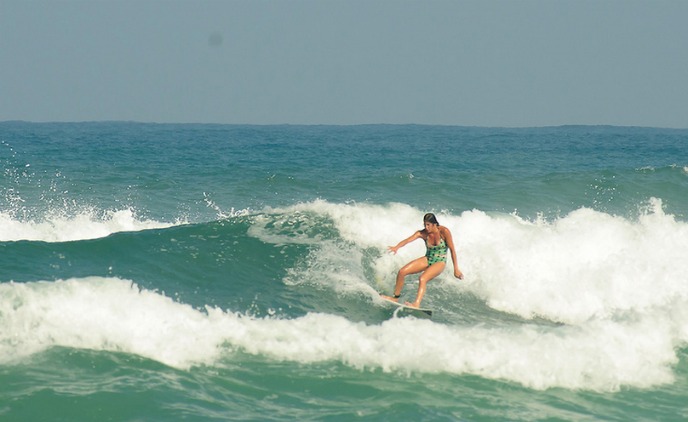 Nitzan Solan surfing with her Arab friends in an Arab village on the Israeli Mediterranean coast. Photo by Uri Magnus, http://polmagnus.com.

Nitzan Solan surfing with her Arab friends in an Arab village on the Israeli Mediterranean coast. Photo by Uri Magnus, http://polmagnus.com.

It was the first Sunday morning in July, and Nitzan Solan wasn’t going to let the recently inflamed conflict between Israel and the Hamas in Gaza get to her. She was determined to go surfing with her younger Arab buddies in Zarka (“blue” in Arabic). This is a tiny Arab fishing village along the northern Israeli coast –– a place that many people in Israel would be reluctant to visit even in quieter times.

For Solan, 32, surfing is a sport she’s been doing for more than nine years, and more that half of that time with Arab-Israelis.

One of them called her on Sunday morning to tell her the surf was up. While there had been signs of riots in their village, an older contact there told Solan the trouble was caused by bored youths and he urged her to come and surf as usual, despite the escalating war.

She agreed, but rather than drive into the village she walked along the sea from nearby Caesarea. The friends then had a great morning together surfing.

Solan had her first surfing lesson in Costa Rica in her early 20s and now combines the sport with her life. She lives in Michmoret, a village by the sea, and when the surf “is big enough I can hear the waves from my home,” she tells ISRAEL21c.

“It’s not typical to get good surf every day,” she says. “It depends on the season, but maybe once or twice a week.”

She likes to hang out in Zarka (also called Jisr a-Zarka) for the vibe. “It’s remote and feels relaxed,” she explains. “Going there feels like being abroad. The local people are kind and nice.” Zarka is the only Arab-Israeli town on the Mediterranean coast.

There have been some efforts to make the village more of a tourist spot. People are investing in initiatives like the Juha Guesthouse, a joint project by an Israeli Jew, Neta Hanien of Moshav Aviel, and Jisr resident Ahmad Juha, the owner of a café by the same name.

As an engineer, Solan is always looking for the right place for surfing, studying wind direction and flow. This can change depending on the time of year.

But what won’t change, conflict or not, is her friendship with Hamush Jibran, 22, and Barak, 17. They are her ‘informants’ in Zarka, her eyes on the waves. “They let me know when the surf is up.”

The three friends speak in Hebrew. “They are completely part of our culture,” she says. “My connection to the people is through surf and when the surf is on. But even when we are finished the connection continues. They make us coffee, baklava. Sometimes in small groups of friends we’ve even stayed over, so yes we’ve all become friends over surfing.” 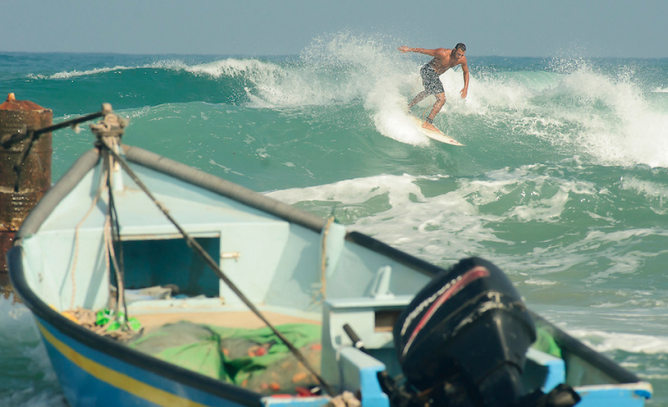 By day, Solan is a chemical engineer working on a sustainable project to feed the world –– Living Box, an all-in-one solution using hydroponics to help people grow their own food. She and her partner Mendi Falk just received a Pears Challenge Prize in Israel and a check for $20,000 to further develop the project.

Solan is friends with Arthur Raskovin from Surfers 4 Peace, an Israeli-based organization that attempts to ease the conflict in the Middle East by surfing-related activities such as sending surfboards and wetsuits to Gaza so young Arabs there can learn the sport.

Raskovin told ISRAEL21c that there are thousands of Jewish surfers in Israel and only about 20 or 30 Israeli-Arab surfers. In Gaza, he estimates about 50 people have taken up the sport, including three girls.

Raskovin says that the surf brings people like Solan and her friends together and that’s what it’s all about. “I have [Arab] friends from Jaffa and I surf with them and we’re in constant contact. When we are out on the surf we leave it all on the land,” he says.

Even though moments after we talked sirens could be heard in Jaffa and a missile launched from Gaza was shot down just overhead, Raskovin and many other Israelis are longing to make a bridge of peace in the Middle East –– whether it’s done with a long board or a short one.

In September, Raskovin plans on meeting with Lebanese surfers in Marseille, France. “Our bigger project is the Med Surf Cup to collect people from all over the Mediterranean –– a network of surfers in constant dialogue.”

Solan’s surfer buddies in Zarka couldn’t be reached for comment. They were probably out catching the waves.

For more about Surfing 4 Peace.