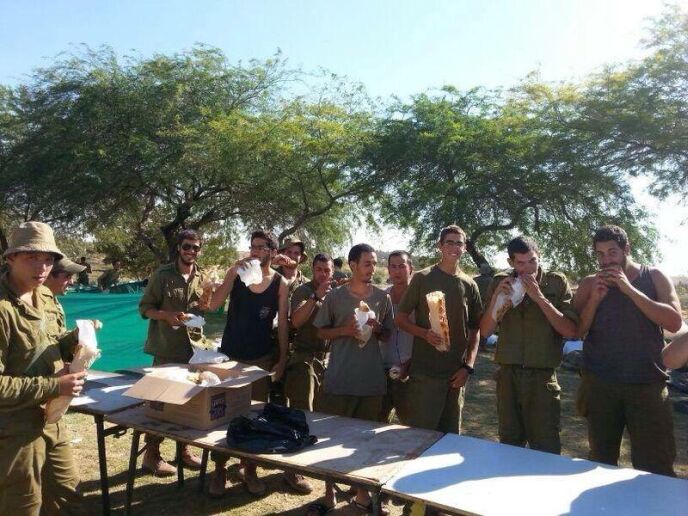 Facebook can bring down governments. It can be a place of highly uncivil debate. But it can also catalyze a war-weary public to support its soldiers in extraordinary ways.

In 2012, during Operation Pillar of Defense, Doron Elbaz put out a call on the social-media site to help feed hungry soldiers massing on the border with Gaza. Volunteers came down to Elbaz’s farm, a few hundred meters outside Moshav Maslul, to prepare meals in a pita. Ten jeeps traveled back and forth to deliver the food for the eight days of the operation.

So when Operation Protective Edge began this year, Elbaz took to Facebook again. The result overwhelmed him.

Those 10 jeeps from 2012 seem positively quaint today. Elbaz and his team of 250 volunteers are now preparing an astounding 35,000 meals a day. On any given day, 50,000 people associated with the war effort – including soldiers, police and medics – visit his makeshift camp for meals, toiletries or new underwear and socks. Volunteers offer massages, haircuts and shaves. And everything is free.

It all started with lemonade. Elbaz grows lemons, so it was natural that when the operation started and he saw soldiers once again passing by his farm, his children would suggest setting up a roadside lemonade stand. “It was really all because of my kids,” Elbaz tells ISRAEL21c.

But once Elbaz posted to Facebook about his stand, people began asking, “Where can we drop off some donations?” Before he knew it, the 2014 version of “Operation Doron,” as Israel TV dubbed his previous efforts, turned into a major gathering point. 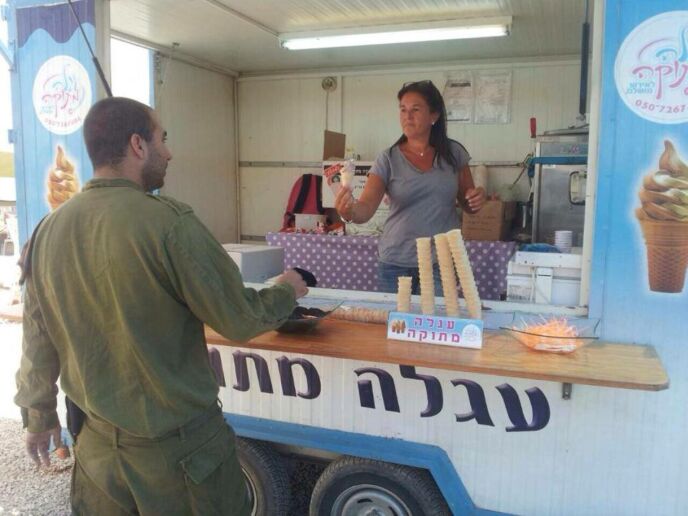 “It’s become a full city,” Elbaz says, complete with food tents, an ice-cream corner and even a synagogue. Of the 35,000 meals prepared daily, 20,000 go to soldiers in the field and the remaining 15,000 are served on site. The meals consist of meat in pita bread with a few vegetables. “We don’t even do hummus or tehina,” Elbaz says. “Nothing wet.”

Elbaz doesn’t get near the front – his farm is a good 15 kilometers away. The army sends its trucks to him. He developed a system for sealing the sandwiches in a bag to keep out the dust. They can be sent in bulk but easily separated when they get to their hungry recipients.

Elbaz estimates his small business is costing some NIS 500,000 ($145,000) a day, but no money changes hands. The meat is donated (a meat processor in Haifa has provided more than NIS 1 million worth of meat alone, Elbaz says); the vegetables are local and the army kicks in the pita.

What would the soldiers do without Elbaz? It’s not like the army isn’t feeding them, but they appreciate fresh food when faced with yet another box of battle rations.

While Elbaz’s operation doesn’t have official rabbinic supervision, a rabbi from Moshav Maslul comes twice a day to make sure everything is kosher.

Elbaz, 43, moved to his farm two years ago after leaving Beersheva with his wife and children. The move was the result of ongoing PTSD (post-traumatic stress disorder) that has made it hard for him to work in construction as he had before.

In 2002, Elbaz was on reserve duty when he was called to the West Bank settlement of Karmei Tsur. Terrorists had infiltrated, as the IDF soldiers protecting the settlement hadn’t completed their basic training yet. Two Israelis – a man and his pregnant wife – were murdered before Elbaz and his unit arrived, killing one and wounding the second terrorist. In the jeep next to him, Elbaz’s friend First Sgt. Major Shalom Mordechai was killed as well.

Elbaz was injured during the attack, both physically and emotionally. “It’s a trauma that you take with you all your life,” he says. But he has done his best to turn tragedy into something positive. “You know, you can sink into depression, or you can take the energy that comes from this and do lovely things.”

Elbaz has two sons and three daughters ranging in age from 17 years to 18 months. He has also “adopted” two Givati infantry soldiers who were fighting in Gaza.

With a ceasefire now in place, what’s next for “Operation Doron?” Elbaz points out that the troops haven’t gone home. He and his barbeque team “will be here until the last soldier comes through.”

Still, Elbaz is looking forward to the day when he’ll be “out of business.” Not that it was a business in any formal sense of the term.

“Citizens of this beautiful country don’t work by the book,” he says. “We work with our hearts. It’s possible to do everything for free, as long as you have love.”