An Israeli bride and American groom who chose to marry in Israel began their reception with just 20 guests but ended the night dancing with some 150 well-wishing strangers.

In what has become a social-media trend of sorts, a real-time call for guests to come celebrate with the bride and groom in Haifa has once again shown that warm-hearted Israelis are plentiful. 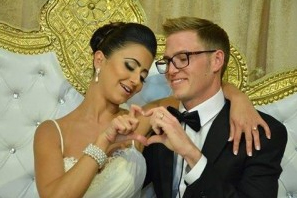 The happy newlyweds, Maayan and Chad. Photo via http://newshaifakrayot.net/

According to local reports, the newlyweds, Maayan and Chad, had lived in the United States for the last few years. They invited friends and family to celebrate their big day with them at a local events hall in Haifa and only 20 people showed up.

A guest from a bat mitzvah party taking place in an adjacent hall saw the nearly empty wedding reception and asked the owner of the venue why the reception was so small. When she was told the couple had come all the way from the US to marry in Israel, she set in motion a real-time SOS call for party crashers.

In August 2015, 2,000 people answered a Facebook call for strangers to fill a depressing wedding reception – and many of them brought checks for the young couple they had never even met.

In this latest crashing party, on February 23, some 150 people came to celebrate the new marriage.
“It was fantastic, perfect,” Chad, the groom, was quoted by local media as saying.

What did his bride think of the surprise partiers? “She loved it,” he said.